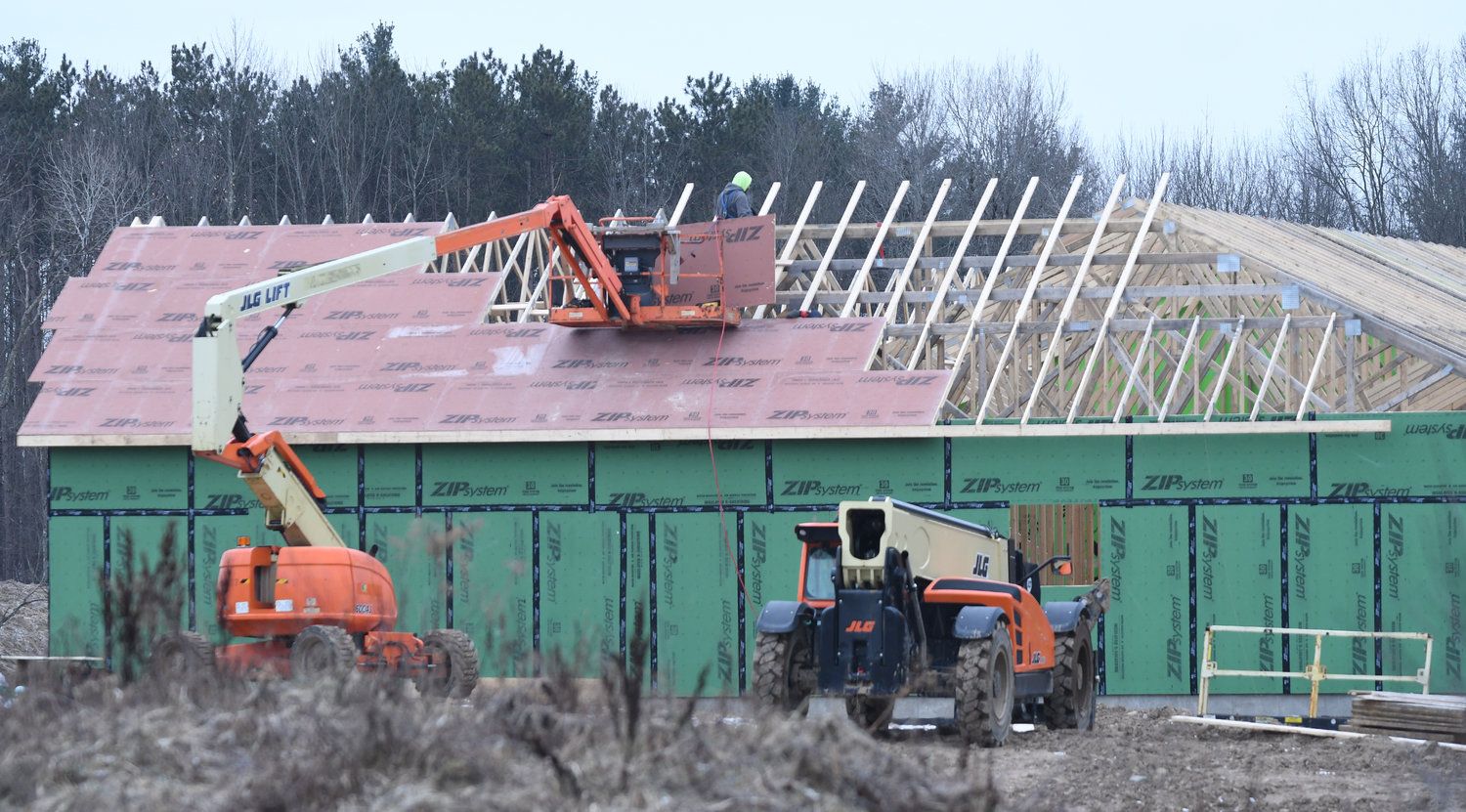 Despite a wintry mix of rain, freezing rain and snow, roof work at the housing complex under construction on Merrick Road in Rome continues on Tuesday, Jan. 17. The first phase of the 65-home project, which includes the construction of 50 units, is already well under way.
(Sentinel photo by John Clifford) 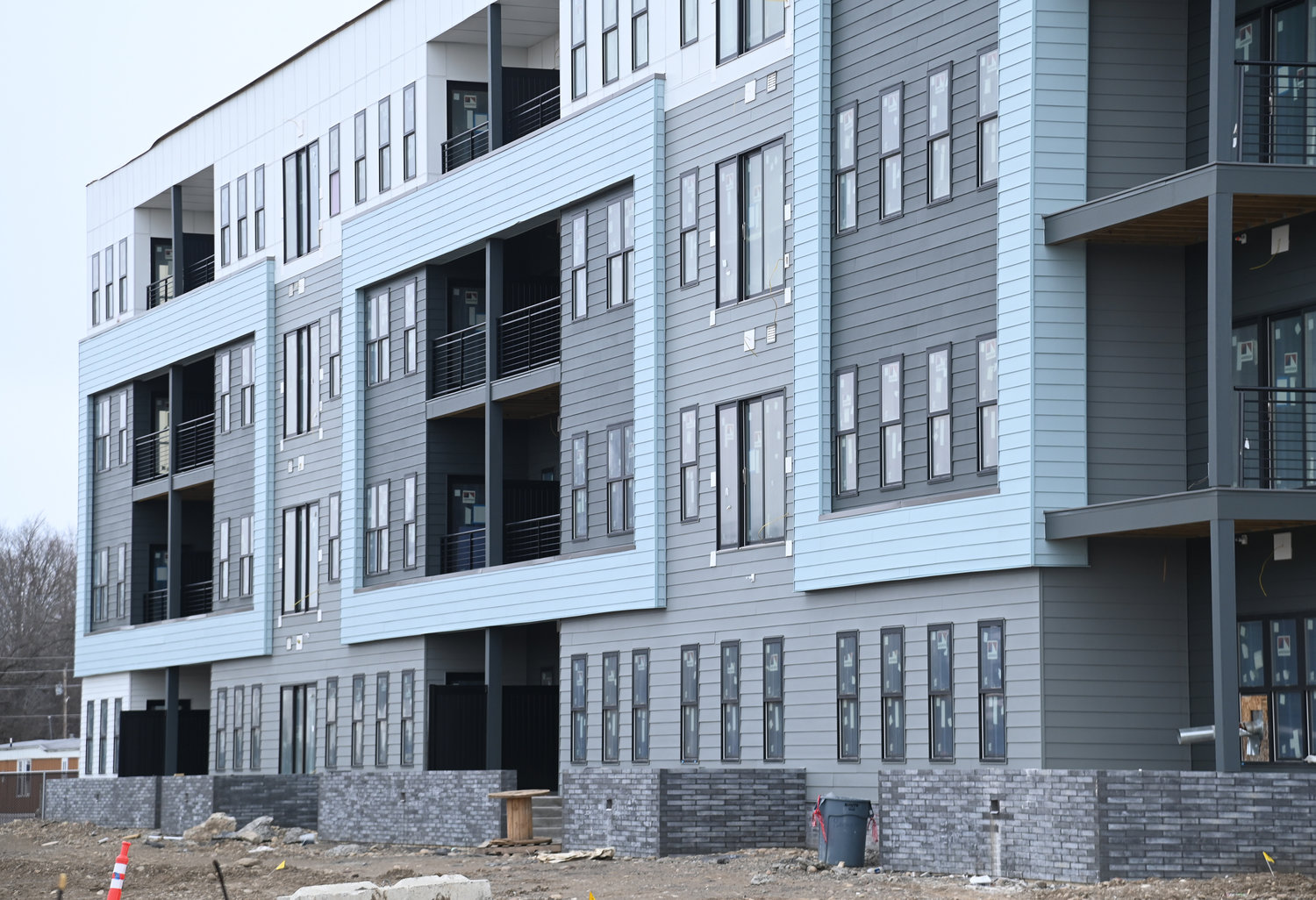 A significant housing push is already under way in the Mohawk Valley. Above, work progresses on one of the newest Air City Lofts buildings on the Griffiss Business and Technology Park in Rome on Tuesday, Jan. 17. In her recent State of the State speech, Gov. Kathy Hochul has set a target for 800,000 new housing units in New York over the next 10 years. The lofts, when complete, will be part of a 300-unit mixed-use apartment community.
(Sentinel photo by John Clifford)

Construction vehicles are shown off of Seymour Lane in Westmoreland on Tuesday, Jan. 17, the site of a new housing complex, one of many planned or currently in progress in the region.
(Sentinel photo by John Clifford) 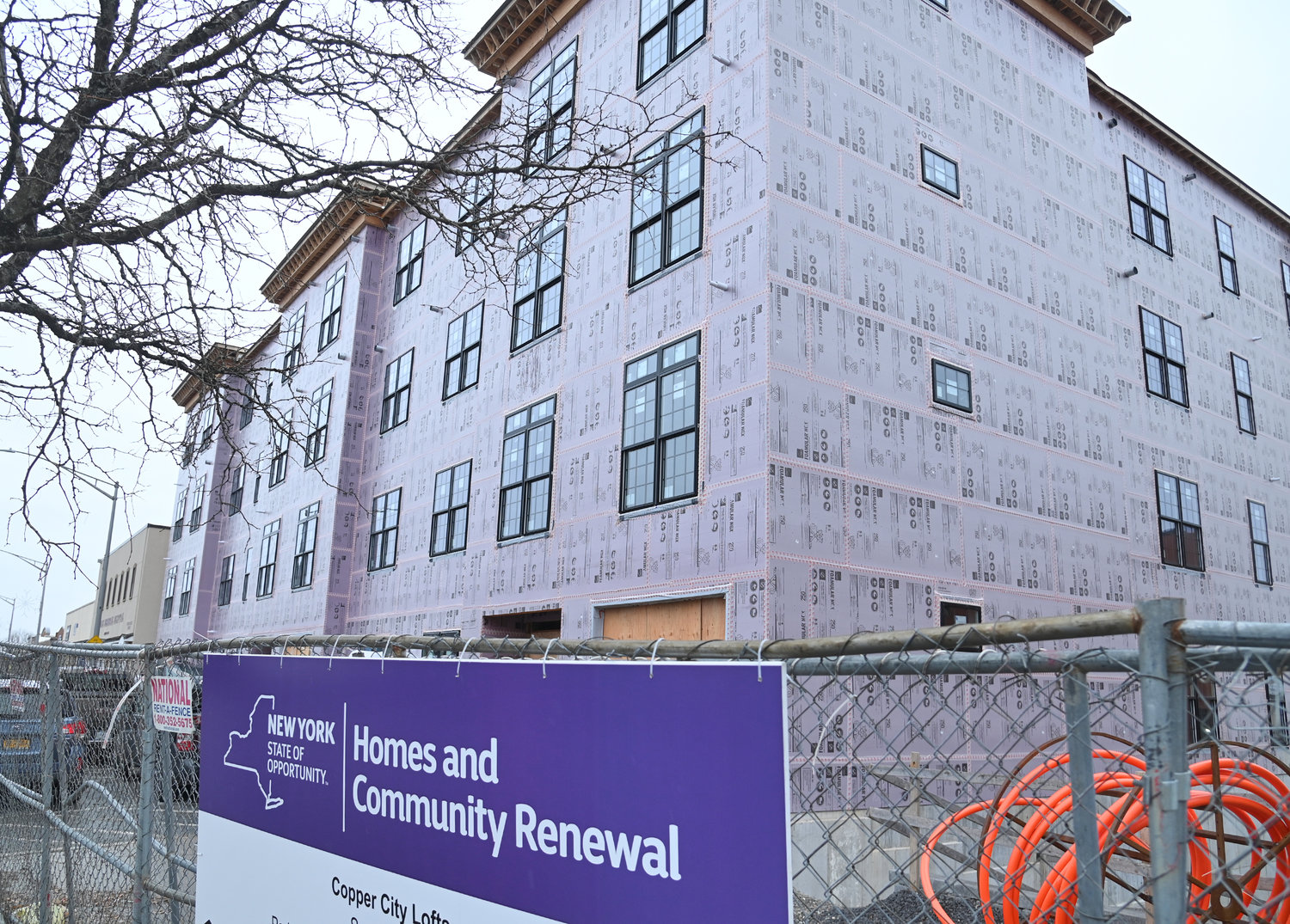 With funding from the New York State Offices of Homes and Community Renewal, the Copper City Lofts in downtown Rome edge closer to completion on Tuesday, Jan. 17. The 68-unit, mixed-use, mixed-income complex is geared toward helping artists live and work in Rome’s developing Arts District.
(Sentinel photo by John Clifford) 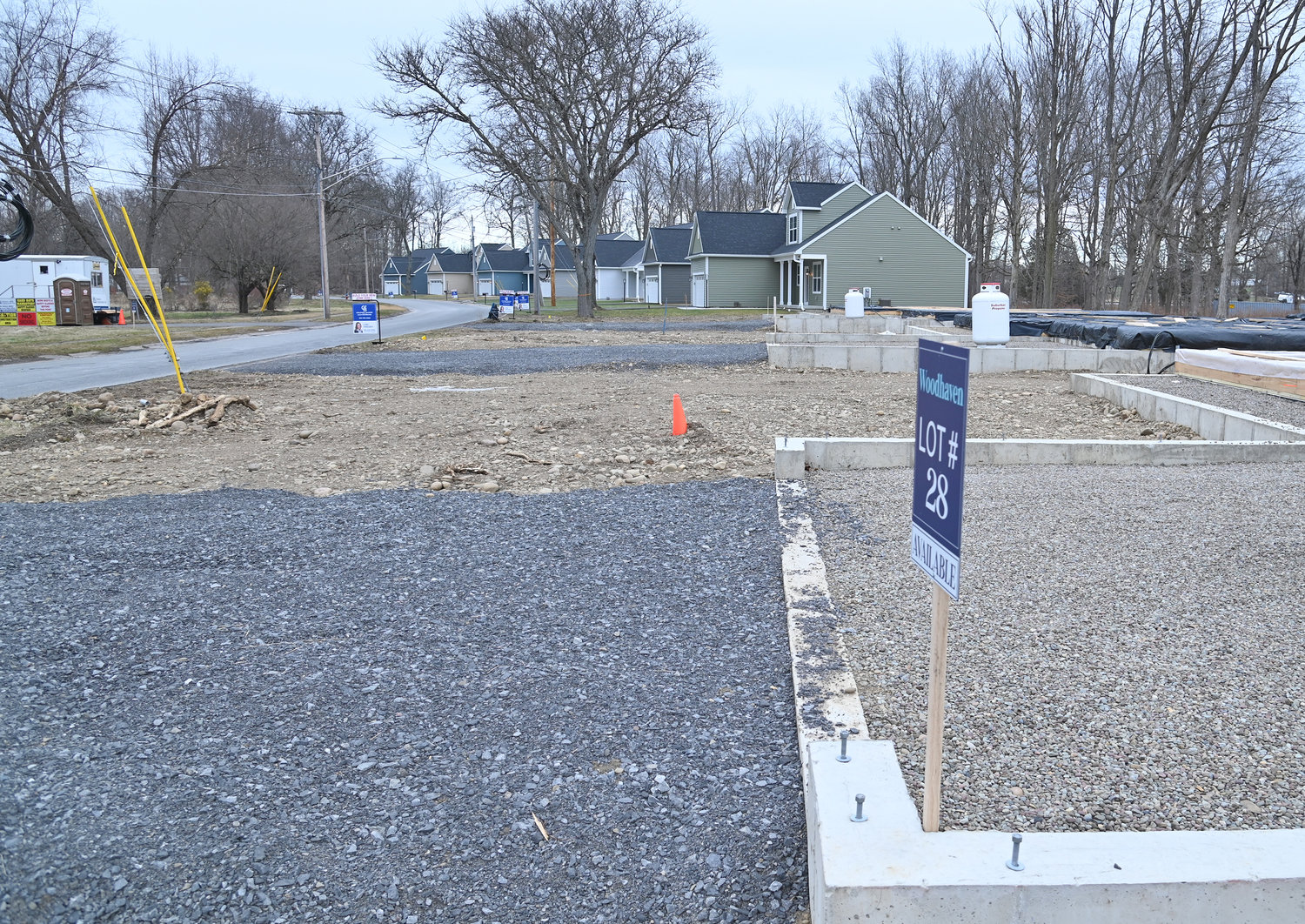 With completed homes in the background and lots under construction in the foreground, the Woodhaven housing project on Park Drive in Rome is shown on Tuesday, Jan. 17.
(Sentinel photo by John Clifford)
Previous Next
Posted Wednesday, January 18, 2023 9:10 am
Joe Mahoney, CNHI State Reporter

ALBANY — In pushing for a major expansion of New York’s housing stock, Gov. Kathy Hochul is taking aim at restrictive local zoning policies by proposing a fast-track state approval process that could be used if proposed projects do not conform to existing regulations.

“Between full-on bans of multi-family homes, and onerous zoning and approvals processes, they make it difficult, even impossible, to build new homes,” Hochul stated in her State of the State speech.

The Hochul plan to create 800,000 new housing units in New York over the next 10 years also would allow expedited state review of projects snarled at the local government level by
waiving environmental reviews, while at the same time exercising “crucial safeguards” aimed at preventing environmental harm and threats to public health.

Hochul would also offer communities outside New York City a new tool for encouraging the construction of affordable housing in the form of a $5 million state low-income housing tax credit that would be available for mixed-income projects.

What Hochul calls the New York Housing Compact would require all villages, towns and cities to nail down home creation targets on a three-year cycle.

“From repurposing underutilized office parks and strip malls to offering new incentives
toward multifamily buildings, localities can choose how to tailor their strategies to increase housing supply,” the Hochul administration said in explaining the plan.

While two major lobby groups for local governments — the Association of Towns and the Conference of Mayors — have yet to weigh in on her package of housing proposals, the plan has ignited concerns among some upstate advocates that it goes too far in encroaching on local control over zoning matters.

Some are also questioning the basis for Hochul’s assertion that creating more housing will somehow stem the flow of outward migration of New Yorkers to other states.

“A need to increase housing access and options certainly exists,” said Assembly Republican Leader Will Barclay, R-Pulaski. “But the premise that a lack of affordable housing is the driver of New York’s population loss is completely off the mark.”

Barclay said there is “serious opposition” to the proposals threatening local control over zoning decisions. “It’s exactly the kind of unnecessary government overreach that forces people to leave, when the goal is the exact opposite,” he said.

Shuttered shopping malls that had once cleared environmental reviews and already have sewer and water lines offer the potential for conversion to affordable housing units, if communities along with a developer decide it’s a good idea to advance such a project, suggested Assemblyman Angelo Morinello, R-Niagara Falls.

But Morinello said respecting local control over zoning matters is vital. “Each municipality, according to the Constitution, has a right to control within its own boundaries,” Morinello said.

Some details of how Hochul’s plan would work are expected to be more fully explained when her administration releases a proposed state budget.

Under the governor’s plan, each upstate community would be nudged to boost their number of homes by 1% every three years. If the target is not met, the state would be in a position to approve affordable housing developments even if the projects are in conflict with zoning controls.

Said Hochul: “Doing nothing is an abdication of our responsibility to act in times of crisis.”

But state policy experts say while it’s important for the state to open a dialogue on the need to stimulate housing projects, local governments are likely to push back against any effort perceived as undermining local control over zoning matters.

“There is nothing more representative of the unique characteristics of each municipality than the approach it takes to zoning,” said Justin Wilcox, executive director of Upstate United, an advocacy group. “This proposal could be seen as an incredible encroachment on the really unique ability of towns to decide their own character.”

A former town supervisor, Assemblyman Chris Tague, R-Schoharie, said the need for affordable housing varies greatly from one community to another, even among those that are in the same region of the state.

“It has to be put in the right place and you can’t overdo it because otherwise it will fail,” said Tague, contending local officials involved in planning and zoning matters are best equipped to determine the vision that their communities need for “smart growth.”

Hochul’s proposal drew the enthusiastic support of the Real Estate Board of New York.

“We applaud the governor for underscoring the critical role the private sector must play in that effort through a workable incentive program, along with the importance of creating policies that encourage rental housing production,” the organization said in a statement.

With some communities in the growing Hudson Valley region and the New York City metropolitan region gripped by a housing shortage, Peter Warren, director of research for the Empire Center for Public Policy, said undraping proposals that could alleviate the situation should produce an important conversation.

But he voiced skepticism as to whether Hochul’s proposal would be a remedy to the trend of people moving away from New York to other states.

“The reality is that people looking at subsidized housing options are not going to leave the state,” said Warren. “They’re not leaving the state because there is insufficient low-income housing.”

The governor suggests local communities should have flexibility in devising strategies for adding to the local housing availability and hitting the state’s targets.