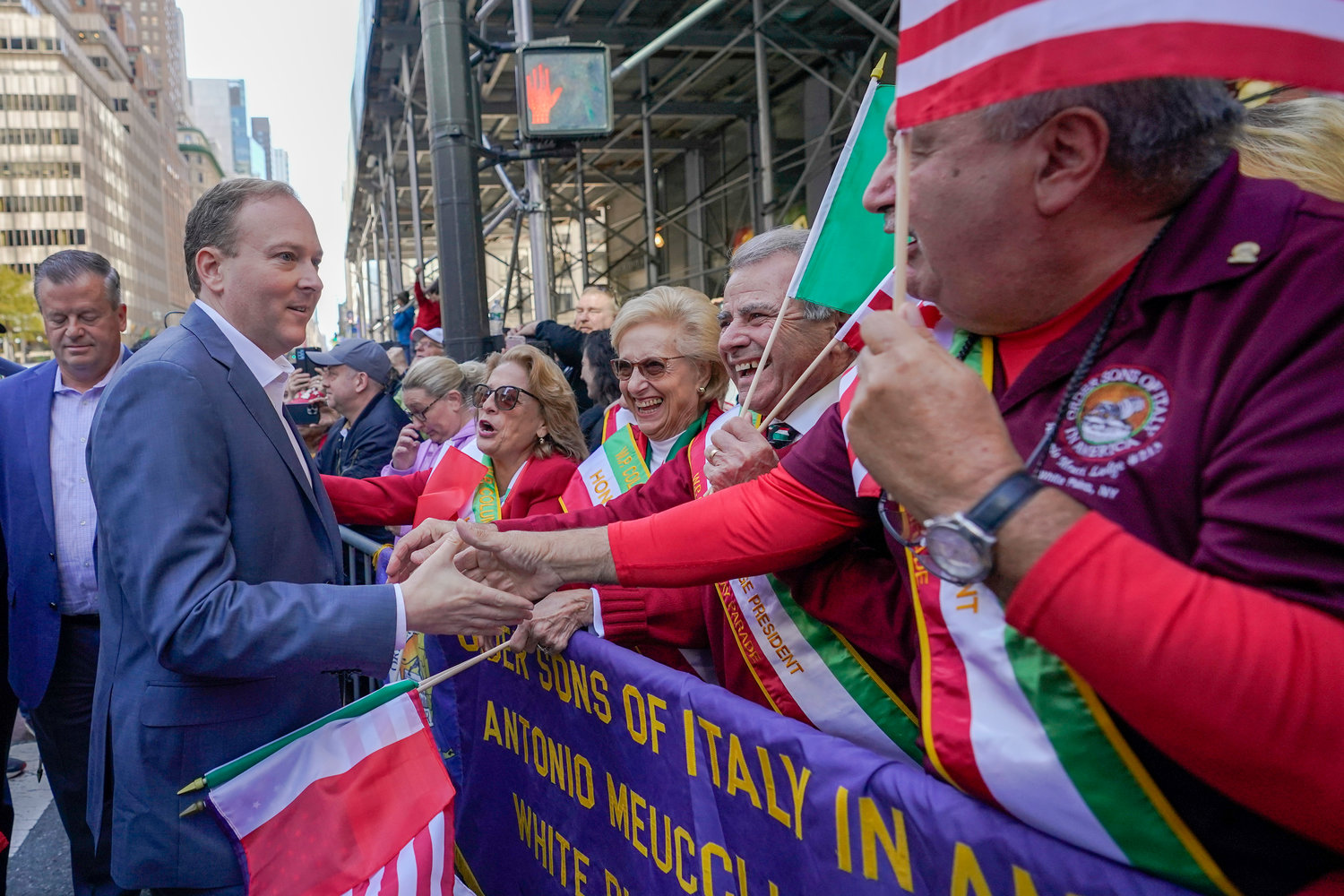 The GOP candidate for governor has spent much of the year railing against a streak of shootings and other violent crimes, including a series of unprovoked attacks on New York City subways. He lamented stories of stabbings, people being shoved onto the tracks by strangers and a bizarre incident near Times Square in which several women in neon green leotards attacked and robbed two women on a train.

And in a personal twist, two teenagers were injured in a drive-by shooting outside his home earlier this month.

“I’ll tell you what: A lot of people are telling me that they’re keeping their head on a swivel more than ever before,” Zeldin said outside a subway station in Queens days after a subway rider was pushed onto the tracks. “People are walking these streets in a way like they’re in a combat zone.”

Ahead of the Nov. 8 election, Republicans around the country are closing with a message that follows closely to what Zeldin has argued much of the year. In recent debates from Georgia to Michigan and Wisconsin, GOP contenders have blasted Democrats as inattentive to crime. And in New York, there are signs that the crime message is resonating as the race between Zeldin, a four-term U.S. congressman, and Democratic Gov. Kathy Hochul tightens somewhat in the final stretch.

“New Yorkers in cities are very, very frustrated by several years of a visible and palpable spike in crime and erosion in quality of life,” Democratic strategist Jon Reinish said. “There are voters on the table who would normally be off the table.”

Zeldin and Hochul will meet Tuesday for their one debate before the general election.

Hochul is still seen as the favorite in the race. A Republican hasn't won the governor's mansion in New York since 2002, when Gov. George Pataki won reelection in the aftermath of the Sept. 11 terror attacks. In every governor's race in the state since 2006, the Democrat has won by a significant margin. Democrats outnumber Republicans by a 2-1 ratio, giving Hochul a distinct advantage even as her party faces headwinds nationally.

Siena College polling since July, including as recently as mid-October, has shown Hochul with a significant lead over Zeldin. But other recent polls have suggested Hochul has only a modest advantage.

“It’s a lot closer race than anybody expected,” said Thomas Doherty, a political strategist and aide to Pataki.

Even if Hochul wins, a weaker-than-expected performance at the top of the ticket could have implications for other Democrats on the ballot, particularly those competing in tighter contests in upstate and western New York. The party will need strong turnout, for instance, to keep U.S. Rep. Sean Patrick Maloney's Hudson Valley district or flip the Syracuse-area seat being vacated by Republican John Katko.

Zeldin’s strategy has at times mirrored the moves of New York Mayor Eric Adams, a moderate who won a crowded Democratic primary last year by focusing on crime rates and made a point on the campaign trail and as mayor to hold news conferences at crime scenes. It has also given Zeldin a campaign platform in New York City, a generally liberal bastion where Republican candidates face an uphill battle.

He has appeared outside New York City apartment buildings, bodegas and subway stops where violence unfolded and has declared crime to be out of control.

“There is rising crime on our streets and in our subways, and people who are in charge right now in Albany actually feel like they haven't passed enough pro-criminal laws,” Zeldin said recently.

Rates of violent crime and killings have broadly increased around the U.S. since the coronavirus pandemic, in some places climbing from historic lows. While experts have pointed to a number of potential causes, including global upheaval related to the pandemic, Republicans have tried to focus blame on criminal justice reforms adopted after George Floyd’s killing by police.

The reality is often more nuanced. Across New York, rates of murder, rape, robbery and assault have all increased since the pandemic, and all of those crimes except robbery have increased from 2012 to 2021, according to New York state data.

In New York City, murder rates are lower than they were two years ago, but rates of rape, robbery, assault and burglary are all up, according to New York Police Department data. Crimes on the city transit system are more than 40% higher than at the same point last year. But subway ridership has risen since last year, and the 1,800 crime complaints made thus far in 2022 on the subway system represent a tiny fraction of the traffic on a system that is seeing about 3.5 million riders a day.

Still, Hochul is paying attention to Zeldin's attacks and responding.

Over the weekend, she appeared with Adams in New York City to announce more police would be deployed in the subways, with officers on platforms in at least 300 stations during peak hours and transit officers to ride hundreds of additional trains per day, also during peak hours.

While she has stepped up her campaign attacks portraying Zeldin as “too extreme” and noting his ties to former President Donald Trump, her campaign ads have included a new public safety focus. Her campaign ad released Friday promised that, as governor, she is working to provide “a safe walk home at night, a subway ride free of fear, a safer New York for every child.”

At an unrelated news conference Monday, Hochul dismissed the idea that she hadn't been talking about crime.

“I’m not letting the political theater out there affect what we’ve done. This is not a new issue for me, and I think that’s what we established,” she said.

Zeldin still faces plenty of hurdles of his own, perhaps most notably his alliance with Trump, who is unpopular in the blue state. After Trump wrongly claimed widespread election fraud in the 2020 presidential election, Zeldin, in his role as a member of the U.S. House, voted against certifying Joe Biden's victory.

Zeldin's ties to Trump became even more awkward this month when Trump, on the day he endorsed Zeldin, said American Jews need to “get their act together” and “appreciate" Israel “before it is too late.” Jews constitute an important constituency in New York, and Zeldin is Jewish, but he has not addressed Trump's comment.

He has similarly tried to pivot away from abortion after sustained attacks from Hochul over the issue.

“I will not change and could not change New York’s abortion law,” Zeldin said in a new television ad.

Former New York Gov. David Paterson, a Democrat, said Zeldin’s alliance with Trump is not as potent of an attack for Hochul with everything else New Yorkers are facing.

“Because of inflation and issues of crime and also other problems that we’re having just in our quality of life, I think that voters are going to be a lot more pragmatic about how they’re doing now as to how they were doing previously, than necessarily who supports who,” Paterson said.

Pataki, the last Republican governor, made a point of stressing his support for abortion rights when he won decades ago.

“The Democrats keep talking about abortion, and look — that might be the savior for them,” said Doherty, Pataki’s former aide.

But Doherty said if he were running a campaign, the only thing he would talk about is crime.

“It is something," he said, “that a Republican nominee for governor can ride into the Albany mansion.”