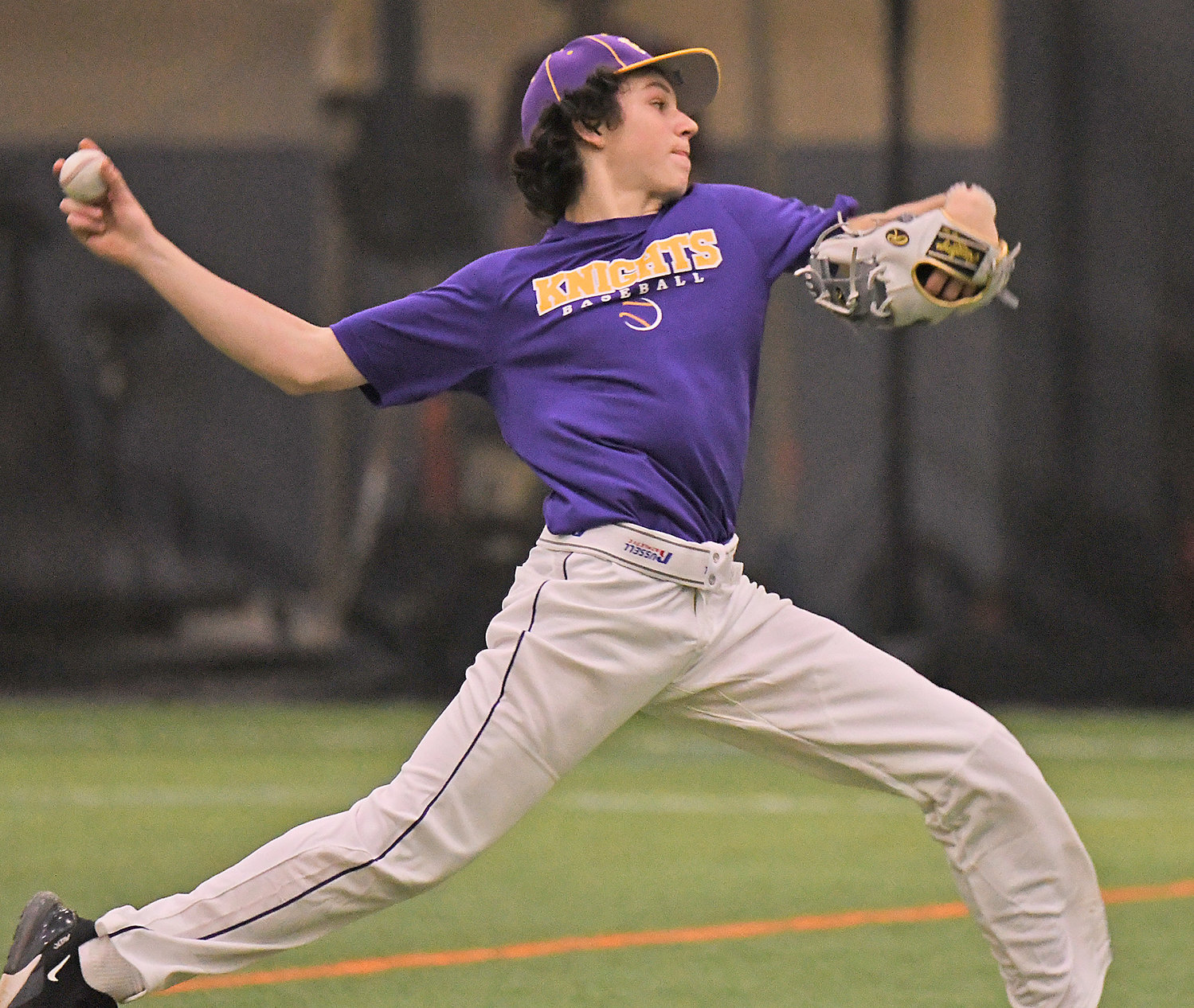 PRESEASON SHOWCASE — Holland Patent sophomore Luke Benedetto pitches during a scrimmage with Oriskany earlier this week. Benedetto is one of the younger players trying to prove he can contribute on the mound and in the infield for the Golden Knights, who reached the Section III Class B-2 finals last season.
(Sentinel photo by John Clifford) 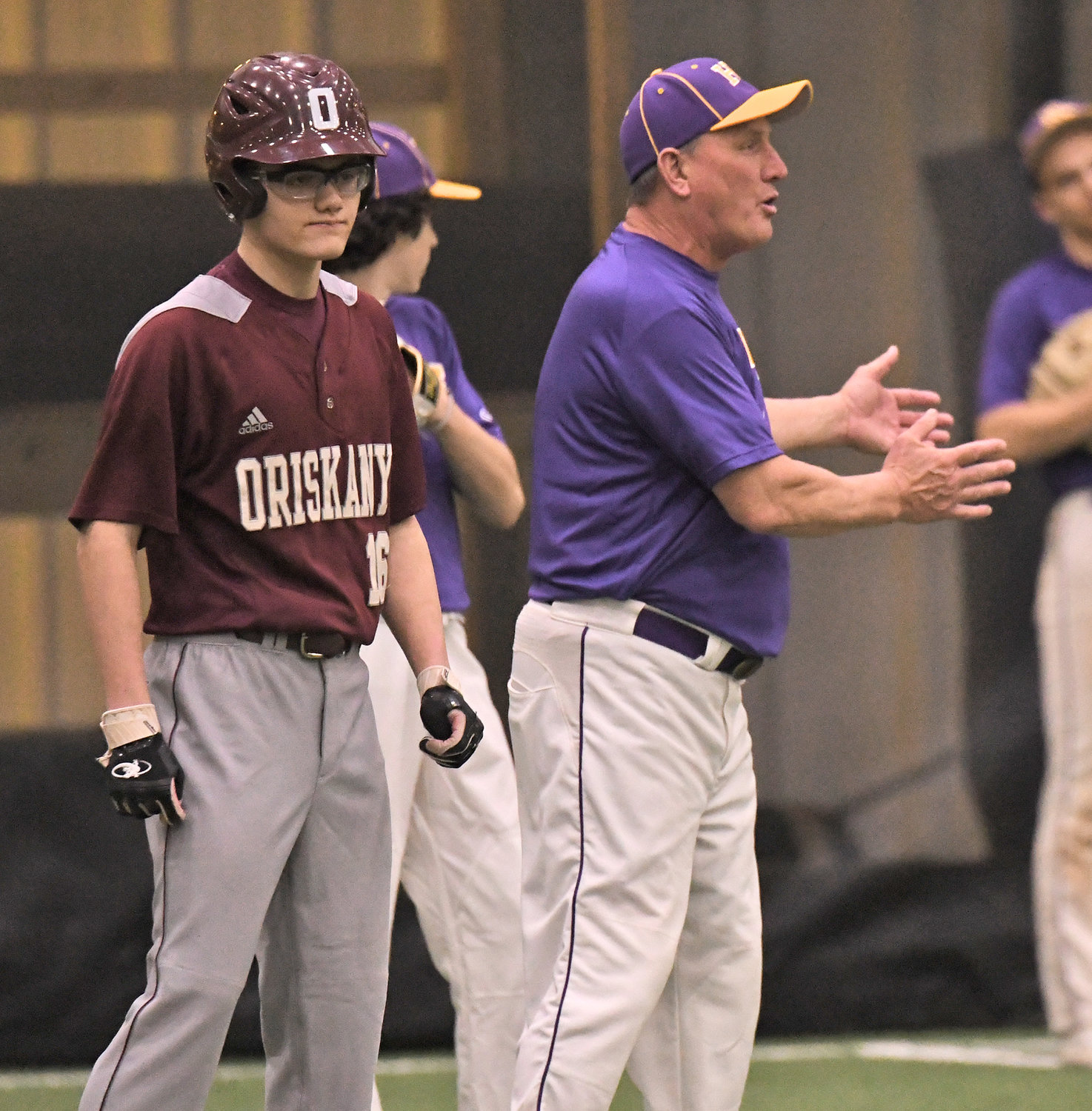 LESSONS FROM A VETERAN — Holland Patent head baseball coach Scott Parsons offers instruction to his players during a four-team scrimmage at Accelerate Sports in Whitesboro earlier this week. Parsons, now in his 36th season on the job, said the young team will need to come together as the season goes on in order to contend in the Center State Conference and make another run deep in the playoffs. Oriskany’s Chase Koenig is at left.
(Sentinel photo by John Clifford) 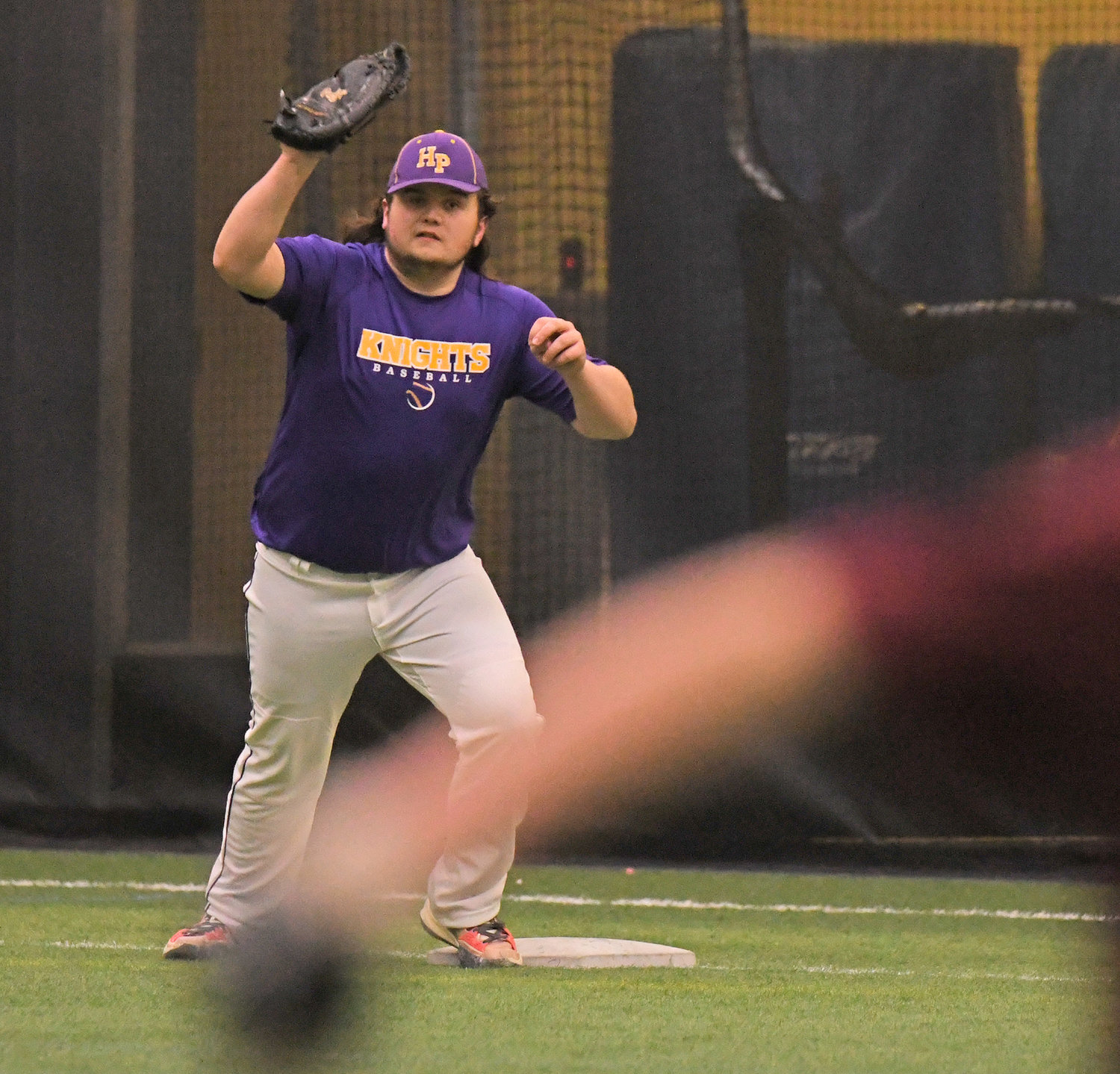 HOLLAND PATENT — The Holland Patent baseball team will start the season with three seniors. A lack of experience, especially on the mound, will be the team’s biggest challenges, according to long-time head coach Scott Parsons.

Parsons is in his 36th season at the helm for the Golden Knights. Last season the team went 11-6, going on a hot streak at the end of the season that got HP to the finals of the Section III Class B-2 playoffs. They lost 3-1 to Skaneateles to end the season.

This year the team was scheduled to open the season with a game against Westmoreland Saturday in Cortland, where a number of teams from around the area will play one game each.

One player Parsons was going to count on this season is senior Adam Jones, who is probably the team’s best pitcher and a crucial part of the defense at shortstop when he’s not on the mound. But he’s been out with a knee injury, and when he’ll be back is still unknown, the coach noted.

So the team will look to senior Caden Briggs and junior Matthew Lux as two players who could lead the Knights. Briggs returns in the outfield and Lux is back behind the plate for a third season but will also pitch and play some infield.

Sophomore Alexander Hoole returns as well. With Jones on the shelf he will be at the top of the pitching rotation, and also plays first base and outfield. Senior Maddox Williams is back at third base and also pitches. Sophomore Aiden Rubas pitches and plays a number of other positions.

“We’re very young in our pitching,” Parsons said. “I have no experience pitching.” The team’s top options will likely be Hoole, Benedetto, Rubas, McLaughlin and Andrew Jones. “They’re the pitchers. The other guys are working as pitchers. Adam could be a number one by far, but we don’t know. If we get him back it’ll be a big bolster.”

Offensively, Parsons said, “I’m small ball. I think in the beginning we’ll have to do a lot of small ball to score enough to win. Last year we got better and better at the plate.” He said the offense will suffer from the loss of Mike Benedetto’s numerous three-hit games last season. He noted that Hoole and Rubas hit well last year as well. McLaughlin has looked good in pre-season, he added. Both Joneses are capable hitters as well. Capodiferro had a great season on junior varsity last year, he said, but how that translates to the varsity level has yet to be seen.

The team will compete again in the Center State Conference this season, though HP is headed to the Tri-Valley League next season, Parsons said. He said the program is preparing for the move up in competition with a schedule full of TVL teams this year.

“We always try to win the league, that’s number one,” Parsons said of his goals. “Sectional-wise, it’s how you draw.” Last season HP’s draw was a tough one, he noted.

One challenge, as it is virtually every season, is the weather. Often baseball in the area struggles to get the season started due to snow that hasn’t quite melted away, which can cause teams’ schedules to be light on games early on and stacked with postponed games being made up late in the season. That can tax a small school’s pitching staff because of so many innings in such a short period of time. With HP’s arms one of the top questions, how the team will manage if there are weeks late in the season with four or more games could determine if the Knights have success.

Parsons said there are two major factors for HP: “We have to jell at the end,” and “I have to get Adam Jones back.”