The Utica Comets’ parent team acknowledged some signings of players Friday who could see time with the American Hockey League squad. 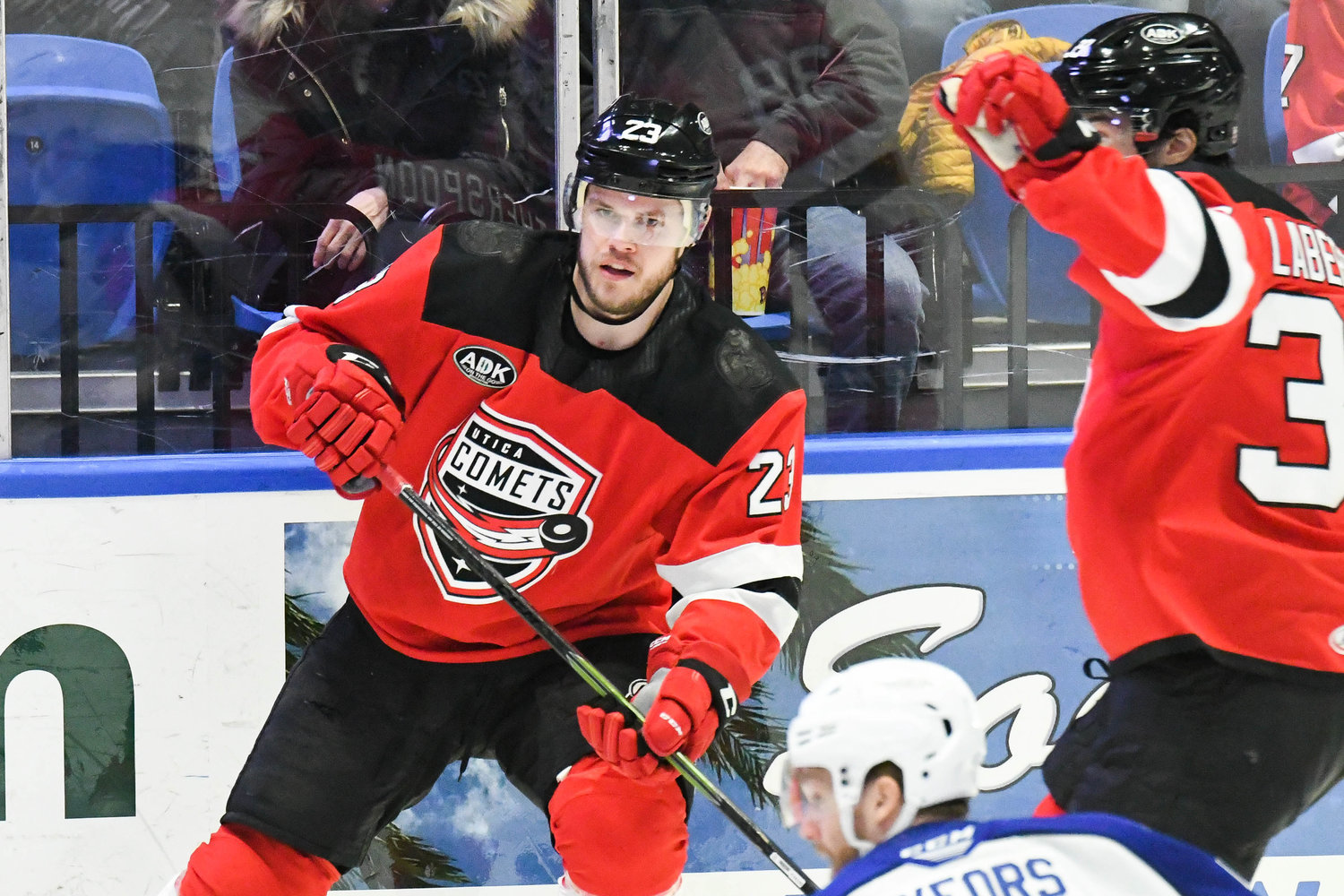 Utica Comets defenseman Tyler Wotherspoon clears the puck during a game in the 2021-22 season. Wotherspoon earned a two-year contract with the parent New Jersey Devils when the Comets’ NHL affiliate acknowledged he was among a few signings Friday.
(Sentinel file photo by Alex Cooper)
Posted Saturday, July 16, 2022 9:00 am

The Utica Comets’ parent team acknowledged some signings of players Friday who could see time with the American Hockey League squad.

Forwards Jack Dugan, Brian Pinho and Mason Geertsen were all signed to one-year, two-way contracts. Geertsen spent last season with New Jersey after the team claimed him via waivers in early October, but played sparingly.

The two-way contracts mean players will be paid one salary if they play in the NHL and separate one if they appear in the AHL.

Wotherspoon was a veteran presence for a group of younger defensemen with the Comets last season and was key on the team’s penalty kill. He also got the opportunity to represent Canada in the Olympics last winter.

The right-handed defenseman finished with 21 points (3 goals, 18 assists) in 53 regular-season games with Utica. He also led the team with a plus-26 rating.

He’s appeared in 486 AHL games with three other teams and 30 NHL games, meaning he’s considered a veteran player in the AHL. Teams in the AHL can play with a few veteran players in the lineup each night.

New Jersey General Manager Tom Fitzgerald said Friday during a media availability that he’d like to add depth to the defensive group.

“We believe in our young players. We believe that (Nikita) Okhotiuk, (Kevin) Bahl and even Reilly Walsh could push for a roster spot (next season),” he said.

“In free agency, the first three days it is bang, bang, bang and then things die down. Then you see what falls through, what makes sense and characteristics you’d like to add. We’ll look at that and see what makes sense to add to the group because of what our future may look like at certain positions.”

The four players are expected to be in depth roles for the organization going into the 2022-23 season. Notably, Fitzgerald didn’t mention any of the signings during a half-hour media availability on Friday morning, meaning they could be considered options for Utica.

With the exception of Dugan, each of the players will need to clear waivers in order to be assigned to Utica. All roster decisions are made by Devils officials.

Here’s a look at the other three signings:

Known for his physical style and checking in at 6-foot-4 and 225 pounds, Geersten has played mostly in the AHL during career, totaling 519 penalty minutes in 297 games. He has 50 total points.

The 24-year-old Dugan and 27-year-old Pinho are new to the organization.

Dugan signed a contract worth $750,000 at the NHL level and $125,000 in the AHL. The right-handed Dugan spent the last two seasons with AHL Henderson with 16 goals and 35 assists in 72 regular-season games.

Dugan was a teammate of Tyce Thompson at Providence College.

He’s played the last four seasons in the Washington Capital organization. With AHL Hersey, he has 40 goals and 38 assists in 172 regular-season games. Notably, he’s coming off shoulder surgery in March, according to reports. He’s played a total of 37 games the last two seasons.

The signings came after leading offensive players for Utica A.J. Greer and Chase De Leo signed with other teams.

“To continue to add is important,” Fitzgerald said.