The Alpha Chi Chapter of Delta Kappa Gamma International has been busy with several projects this school year.At Christmas, they adopted two families, one through Foothills Rural Communities Ministry … 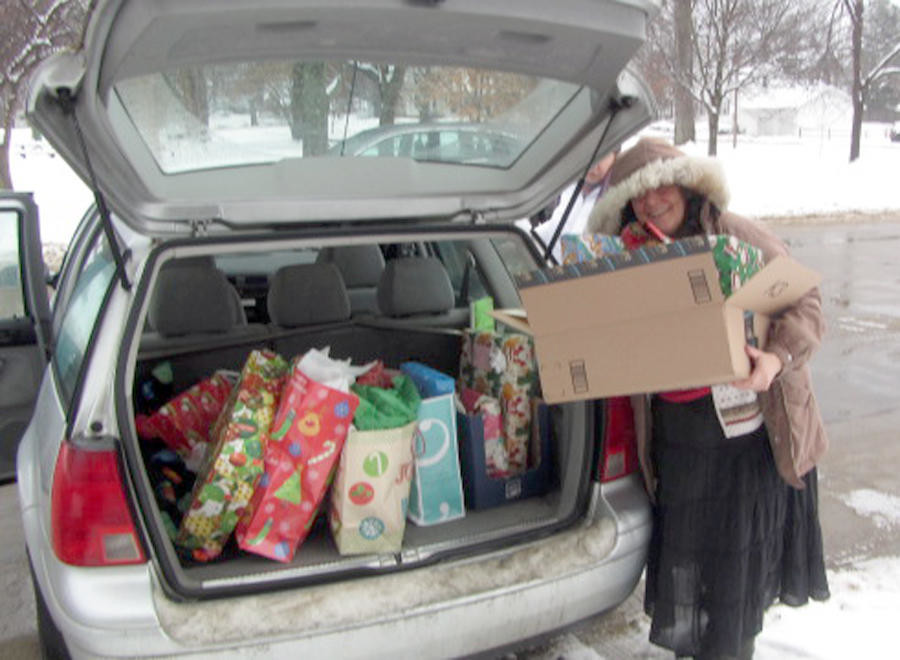 MAKING A DIFFERENCE — Vicky Stockton Allen, vice president of Alpha Chi, peeks from under her coat hood as she places the many gifts from Alpha Chi members into her car for distribution during one of several community projects performed by the organization and its members. (Photo submitted)
Posted Monday, March 23, 2015 4:00 pm

The Alpha Chi Chapter of Delta Kappa Gamma International has been busy with several projects this school year.

At Christmas, they adopted two families, one through Foothills Rural Communities Ministry in Oneida County and one through Gram Lorraine Jody Tanner Carla Christmas Program in Herkimer County. Their generosity with gifts of clothing and toys not only filled the needs of the two families but reached out to others in these programs as well, organizers said.

Through a grant submitted by member, Colleen Jackson, Alpha Chi was able to obtain books to accompany the bibs members had previously stamped with “Read to Me”. These books and bibs were distributed to Evelyn House, St. Luke’s Hospital, Rome Hospital, and the MV Refugee Center to be given to parents of newborn babies.

A third project involved the reprint of the cookbook of international recipes that Alpha Chi created in conjunction with the Refugee Center of Utica. Copies are on sale at the Gift Shop at Munson Williams Proctor Arts Institute, at Brenda’s Natural Foods and Darkroom Unlimited in Rome.

Money from the sales of the cookbook goes to various service projects of the chapter.

While working on these projects, members also found time to sell coffee and chocolates to raise money for the two scholarships they give to two college women studying to enter the education profession.

Jean Wagner, retired MVCC professor, is president of Alpha Chi, a chapter of Delta Kappa Gamma, an international organization of women educators. The educators of Alpha Chi come from the Rome-Utica-Valley area representing 14 different school districts in two counties. They make a difference inside and outside of the classroom, the organization added.