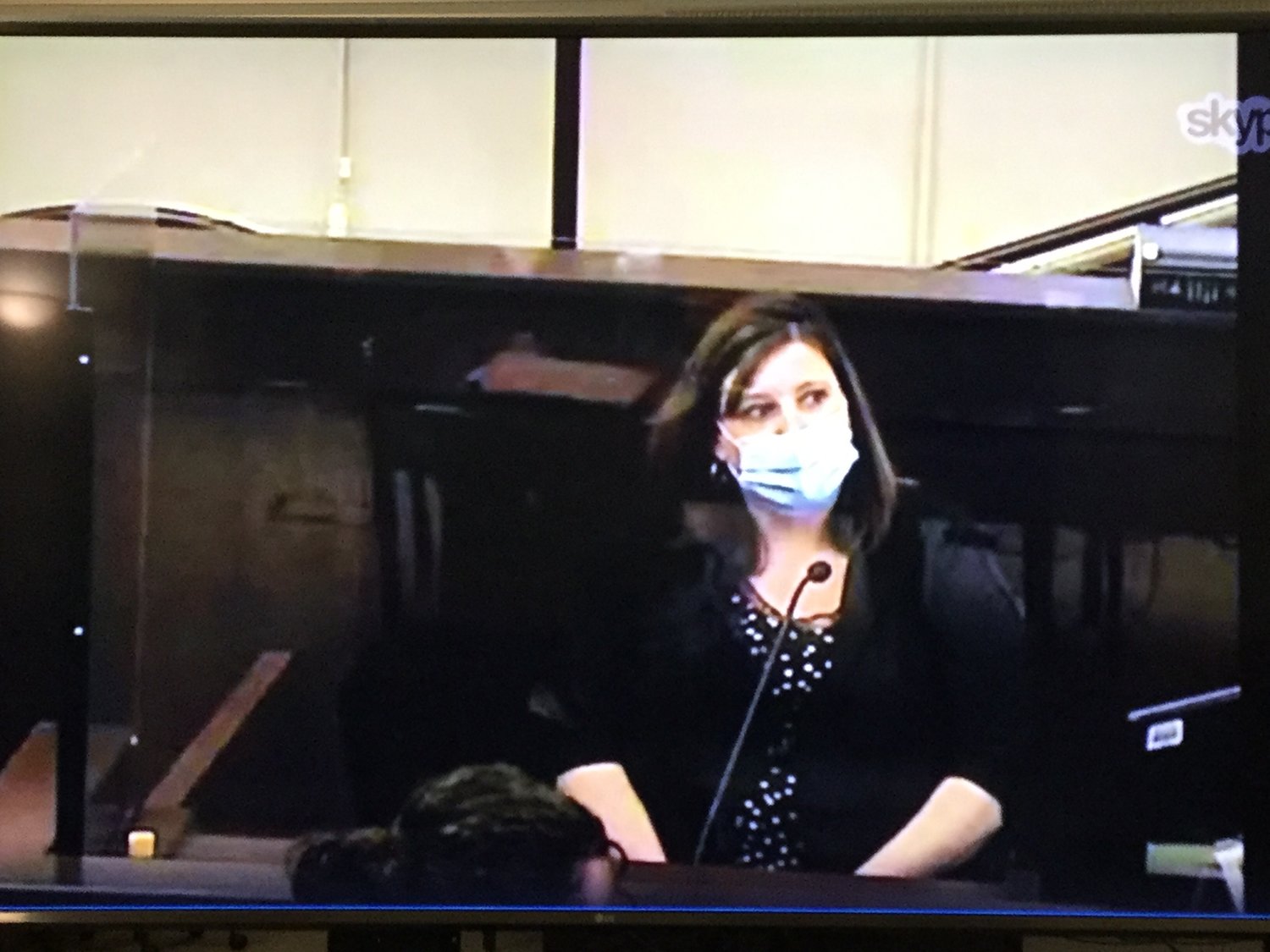 COMPUTER ANALYST — Heather Charpentier, a computer forensics analyst with the New York State Police crime lab, testified on Wednesday about text messages between Kerrilee D’Avolio and the new man in her life, Travvase Shahid.
(Sentinel photo by Sean I. Mills) 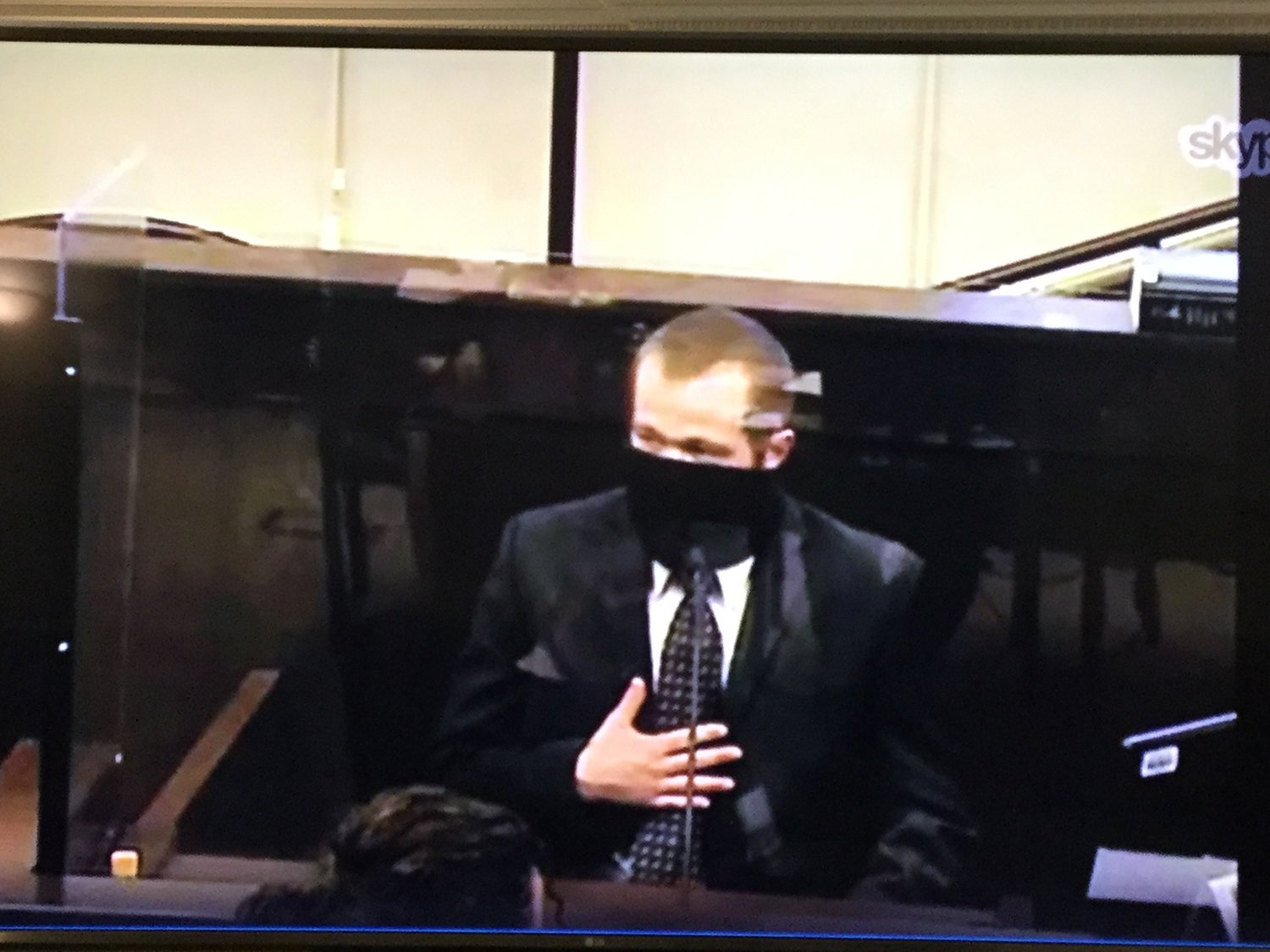 SPECIAL AGENT — Agent Kirk Ellis, with the Department of Defense, examined Jason D'Avolio's laptop computer. He testified to the jury on Wednesday about the daily log D'Avolio kept on his computer.
(Sentinel photo by Sean I. Mills)
Previous Next
Posted Thursday, October 29, 2020 11:52 am
Sean I. Mills
Staff writer
email / twitter

Some of alleged murder victim Kerrilee D’Avolio’s last words were shared to the jury on Wednesday in a series of text messages between herself and a new person in her life.

“My decisions are not a game to me. I am not trying to fit in with society or please people anymore. I am being selfish for once,” Kerrilee texted the man at 7:23 p.m.

The text messages shared with the jury between Kerrilee and Travvase Shahid stretched from the morning of July 27, 2019 to the late night hours of July 28, shortly before authorities said her estranged husband, Jason P. D’Avolio, shot Kerrilee in the back of the head in their Belmont Street home in Rome.

Jason D’Avolio, age 48, is on trial for second-degree murder and concealment of a human corpse, after prosecutors said he then took her body and threw her in a dumpster.

“My decisions for myself reflect my kids and what I want them to learn and understand, the ways of the world, and why I do what I do,” Kerrilee wrote to Shahid.

Shahid testified on Tuesday that he started as Kerrilee’s personal trainer, then their relationship evolved into one more personal and intimate. He testified that they never had sex, but the pair were making plans to be together in the future. Shahid told the jury that they texted one another nearly all day long by late July.

On the night of July 27, the texts showed that Kerrilee and Shahid made plans to get together in the evening, after Kerrilee had gone out to dinner with her sister and then said goodbye to her three daughters. Between 9:17 and 10:49 p.m. July 27, there were 44 text messages between the two of them before Kerrilee told Shahid she had just left home to see him, according to testimony.

Shahid testified earlier that they then spent several hours together, during which Kerrilee got “emotional” and cried on his shoulder.

On the evening of July 28, Kerrilee texted Shahid that she wanted to write her husband a letter.

“I’ve decided that I was going to write my ex a letter because I feel I need to say my final piece without being attacked,” Kerrilee texted at 6:26 p.m.

“Me doing this is making me 100 times better and making my decisions more clear. There is no guilt of what I am doing, especially with you. This will help him understand that, I hope.”

The texts between Kerrilee and Shahid continued until about 10 p.m. July 28. They made plans for the following day and then said goodnight to one another.

Other evidence on Wednesday included a look into a daily log that Jason D’Avolio kept on his work laptop computer. D’Avolio worked for the Defense Finance Accounting Service and his computer was seized and examined by investigators.

The first entry in the daily log was on April 4, 2019. According to previous testimony in the trial, D’Avolio filled out the application to buy a rifle at the Walmart in Rome on April 3, telephoned the Rome Police on April 4 asking about whether or not a spouse could remove children from a home, and then completed the purchase of the gun on April 5.

The entries in the daily log showcase D’Avolio’s ongoing frustrations with not being able to get close to his wife, as well as Kerrilee’s continued efforts to go out and be on her own.

On April 15, 2019, D’Avolio wrote in the log that Kerrilee asked him she could to take a four-day trip in July/August with a friend of hers.

“She will be long removed before then, so no big deal to me,” D’Avolio wrote in his log in response. “Just have to take days off to be with my kids.”

One witness on Wednesday was Denise Spagnola, a licensed psychotherapist who met with Kerrilee D’Avolio between January 2017 and April 2018. When Kerrilee first came to see her, Spagnola said she, “came in feeling somewhat depressed, anxious, distressed” because of stress in her marriage, with her children, with her weight gain and with finances.

“She denied ever attempting suicide. She did say she had some thoughts of suicide due to some postpartum depression,” but not by the time they met, Spagnola told the jury. “She said she had no plans and she would never do that.”

Spagnola told the jury that she diagnosed Kerrilee with “situational depressive mood”, which was a temporary affliction and not the same as the more serious clinical depression.

The psychotherapist testified that she met with Kerrilee 11 times and that Kerrilee “improved tremendously” over the course of their sessions. She said Kerrilee started to take better care of herself, started to lose weight, was excited about going back to work and going back to school.

Spagnola said that Kerrilee wanted to make her daughters proud of her, which Spagnola took as a good sign, because it meant Kerrilee was thinking about the future.

By January 2018, Spagnola testified that “her depression had subsided”, and by the end of their sessions in April 2018, she told the jury that Kerrilee was in a “super mood” and “was glowing from ear-to-ear.”

Spagnola told the jury that they decided to end their sessions because Kerrilee might not be able to make time for them anymore. She said the last words Kerrilee ever spoke to her in April 2018 were, “Well, maybe I’ll get a divorce.”