With Senate won for Democrats, ‘It’s the year of Chuck Schumer’

The 2022 election was “a victory and a vindication for Democrats,” Schumer said.

With Senate won for Democrats, ‘It’s the year of Chuck Schumer’ 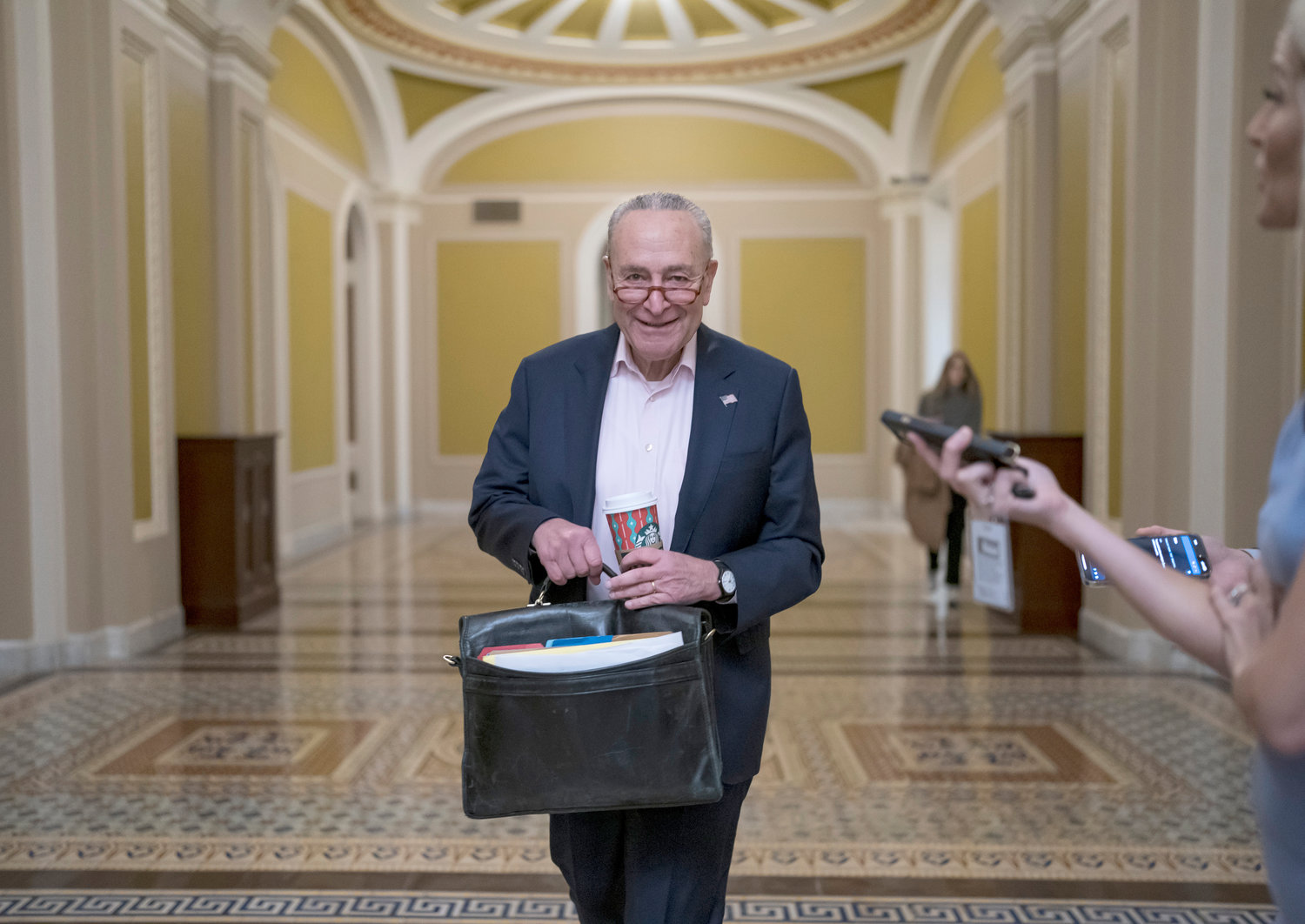 WASHINGTON  — Senate Majority Leader Chuck Schumer was eating Peking duck at a Chinese restaurant with family and friends on Manhattan’s West side Saturday evening when an aide called with urgent news: Democrats would win Nevada’s Senate seat and keep their majority.

The restaurant erupted in cheers as the news flashed across a television screen, and a group celebrating a birthday sent him a slice of cake.

But Schumer didn’t stay to celebrate. He was soon rushing back across town for an impromptu, late-night news conference in the lobby of a building near his office.

“I will once again be majority leader,” he declared to the cameras, almost giddily.

The 2022 election was “a victory and a vindication for Democrats,” he said.

It was vindication for the often-underestimated Schumer, in particular, who has racked up a series of unexpected legislative victories this year as he has navigated Democrats’ slim 50-50 majority. But the midterm elections held the biggest surprise of all, with his party successfully defending seats despite historical trends and low approval ratings for President Joe Biden. The result: another two years of narrow Senate control.

Even a narrow majority has huge consequences for Biden and his party, as the Senate confirms executive branch nominees and judges, including for the Supreme Court if there are any vacancies in the next two years. Democrats will be able to decide what bills to put on the Senate floor.

“Listen, I was on top of every one of these campaigns,” Schumer said in an interview in his Capitol office on Monday, a fire roaring behind him and his elation still evident. He said he believes Democrats won because they had better candidates and because of their legislative achievements — allowing the government to negotiate some prescription drug costs, investments to fight climate change and a bipartisan effort to tighten who can own guns, among other measures that passed over the summer.

“This was always my plan,” Schumer said. “Get things done, and focus on those things, and don’t get diverted.”

He said, voters rejected anti-democratic efforts by Republicans who supported former President Donald Trump’s efforts to overturn the last election. “We were on the precipice of autocracy gnawing away at our democracy,” said Schumer, who noted that the House committee investigating the Jan. 6 Capitol insurrection brought new attention to the attack over the summer, with multiple hearings and images of Trump’s supporters beating up police getting heavy airtime.

“American voters said, I don’t like this. I’m going to reject it. And the American people saved us.”

In his own election postmortem on Monday, Republican leader Mitch McConnell saw it differently, describing the Democrats’ narrow win in the Senate and still-uncalled House control as confirmation of a “closely divided nation.” Making the case directly to voters in Georgia, who will decide a December runoff between Democratic Sen. Raphael Warnock and Republican candidate Herschel Walker, McConnell asserted that Democratic policy failures led to high inflation.

If Warnock wins, the Democrats will have a 51-49 majority. And Schumer will have protected every single one of his incumbents in the election — a stunning feat.

First elected to the House in 1980 and then the Senate in 1998, Schumer has long been known for his political acumen — he was in charge of Democrats’ winning Senate efforts in 2006 and 2008 — and as a master communicator. But to his colleagues, the midterm election results are confirmation of his skills as a legislative leader as well. While he has been criticized by Republicans and some progressive groups for giving up some items on Democrats’ wish list, the party had accomplishments to point to in the election, and lawmakers say that gave them new momentum over the summer.

“It’s the year of Chuck Schumer,” said Sen. Chris Murphy, D-Conn., who spearheaded bipartisan negotiations on gun legislation. The election wins were “set up by a bunch of victories that ended up motivating both swing and base voters,” Murphy said, particularly the sweeping health, climate and economic package that Democrats passed after Schumer negotiated one-on-one with moderate Democrat Joe Manchin of West Virginia, who had singlehandedly killed an earlier version of the legislation.

Murphy said Schumer’s style is “totally unique, and it’s very well suited to a 50-50 Senate,” in that he knows when to micromanage and when to ease off. Murphy said he talked to Schumer several times a day while he was negotiating the gun bill, but he still let Murphy take the lead.

Schumer brags about his communication skills, noting he has every single Democratic senator on speed dial in his famous flip phone. And he knows many of their numbers by heart, he said.

“Every member calls me,” he said. “They don’t go through staff. They can talk to me directly, no email.”

Brian Fallon, a former Schumer aide who is now the executive director of Demand Justice, a liberal advocacy group that supports expanding the court, said Schumer has “come into his own in the last two years” in terms of legislative maneuvering. At no moment was that more evident than this summer, Fallon said, when Schumer unexpectedly announced the deal with Manchin on the sweeping package of bills and took angry Republicans by surprise.

The next two years won’t be easy, even if Warnock does win and give Democrats a crucial extra seat. “So where do we go from here?” Schumer asked. The Democratic leader said he intends to sit down with McConnell and try to find places to agree, even though the two men have traditionally had a frosty relationship.

“I’m going to make a real effort to do as much as we can,” Schumer said, echoing what he’s said since he took the top job two years ago. “We’ve got to focus on getting things done. That means we’re going to have to compromise.”