Area Social Security recipients will be among those nationwide to get an 8.7% boost in their benefits in 2023. 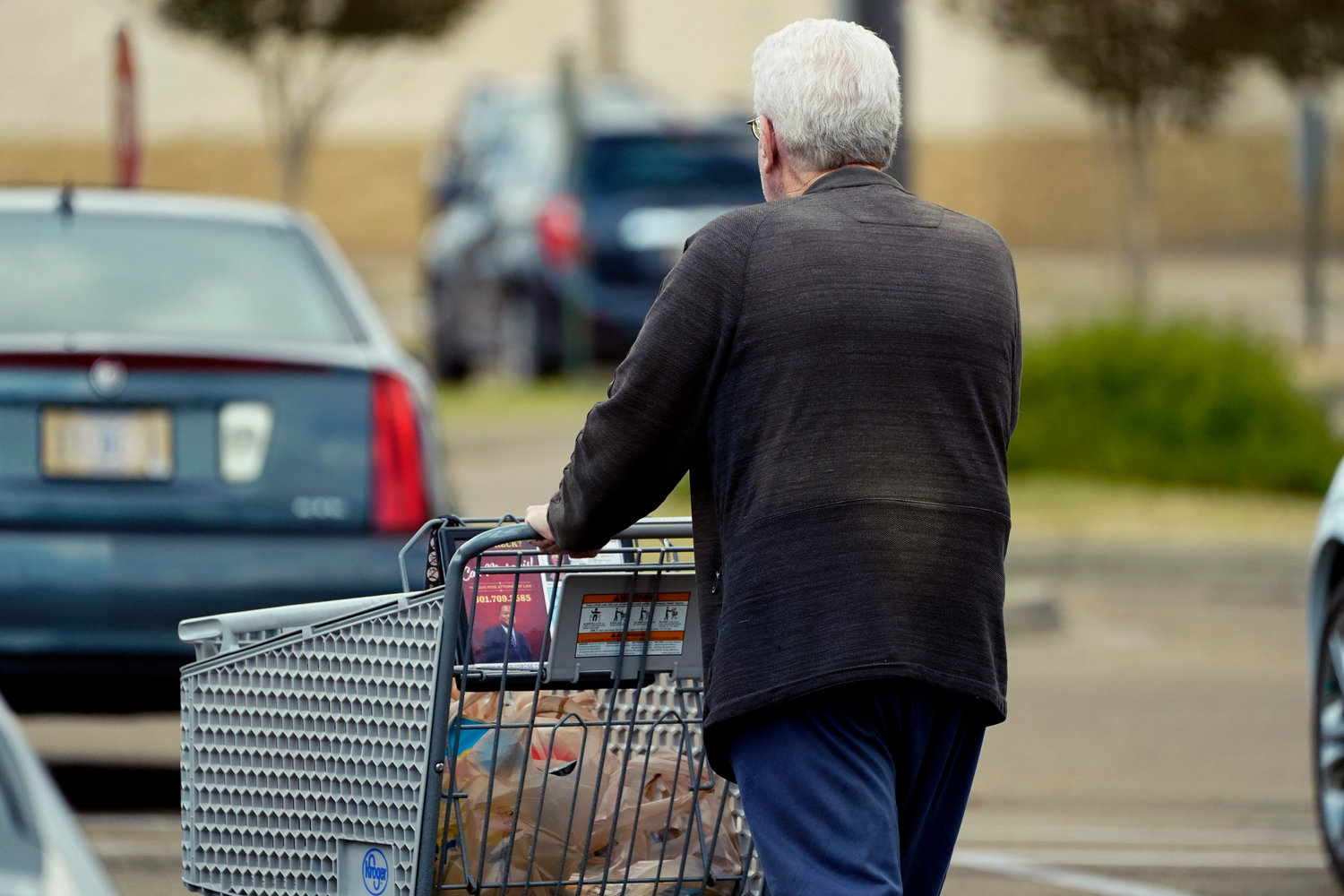 An older customer pushes his Kroger shopping cart laden with purchases in Jackson, Miss., Wednesday, Oct. 12, 2022. Millions of Social Security recipients will soon learn just how high a boost they‚Äôll get in their benefits next year. The increase will be announced Thursday morning.
(AP Photo/Rogelio V. Solis) 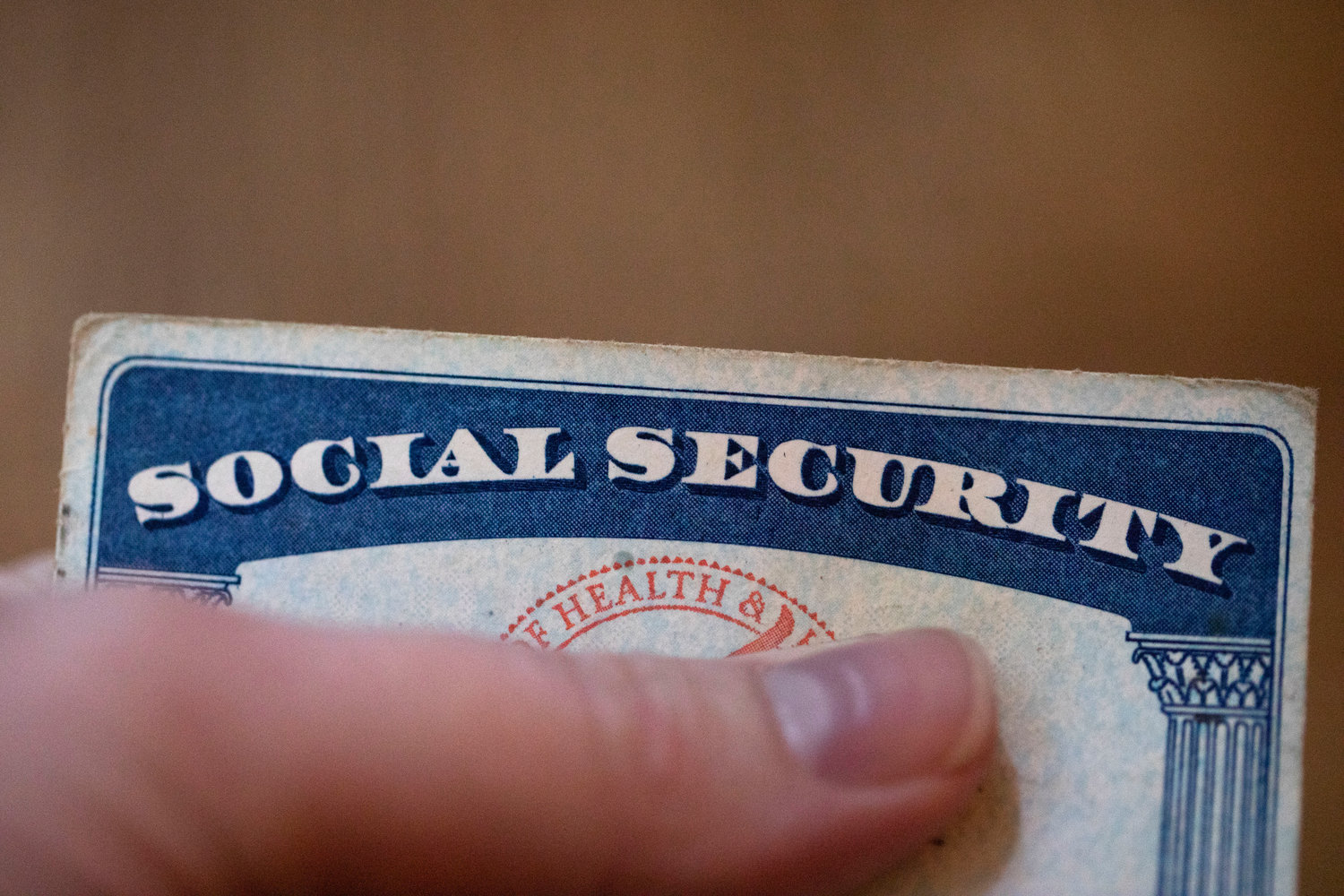 FILE - A Social Security card is displayed on Oct. 12, 2021, in Tigard, Ore. Millions of Social Security recipients will soon learn just how high a boost they'll get in their benefits next year. The increase to be announced on Thursday, Oct. 13, 2022, expected to be the highest in 40 years, is fueled by record high inflation and is meant to help cover the higher cost of food, fuel and other goods and services.
(AP Photo/Jenny Kane, File)
Previous Next
Posted Friday, October 14, 2022 11:20 am
Carly Stone
Staff writer
email / twitter

Area Social Security recipients will be among those nationwide to get an 8.7% boost in their benefits in 2023. That’s a historic increase and welcome news for American retirees and others — but it’s tempered by the fact that it’s fueled by high inflation that’s raised the cost of everyday living.

The cost-of-living adjustment means the average recipient will receive more than $140 extra a month beginning in January, according to estimates released Thursday by the Social Security Administration.

The boost in benefits, the biggest in 40 years, will be coupled with a 3% drop in Medicare Part B premiums, meaning retirees will get the full impact of the jump in Social Security benefits.

“Prior to 1975, social security increases were determined by Congress. Since then, the government has used a once-per-year cost of living adjustment based upon CPI (Consumer Price Index) inflation. This year’s increase of 8.7% is the largest since 1981 and the fourth largest on record. It will provide some relief for seniors and other Social Security beneficiaries, but it does nothing to solve the underlying problem of rampant inflation that has been plaguing our economy,” said Colgate University Professor of Economics Chad Sparber.

“We are always happy to see a decent increase provided to older adults’ Social Security benefit and, if it comes with a drop in Medicare Part B premiums, that’s an additional bonus. As always, we will continue our work at OFA advocating for and assisting the older population we serve to access available programs that help them stretch their income dollars,” stated Julie Harney, executive director of the Madison County Office for the Aging, Inc.

“The cost of living has gone up. Things like gasoline, food, heating, fuel, is dramatically increasing. So that 8.7% ... I think will be a bit of a help. Even if in a small way, it will help older residents, Medicare beneficiaries, meet their living costs,” shared Mike Romano, deputy commissioner of the Oneida County Department of Family and Community Services, which oversees the county office for the aging. The decrease in Medicare Part B premiums is also a benefit, he said.

Romano also noted that for many older retirees, Social Security is a huge chunk of their income, if not their only source of income.

“This year’s substantial Social Security cost-of-living adjustment is the first time in over a decade that Medicare premiums are not rising and shows that we can provide more support to older Americans who count on the benefits they have earned,” said Social Security Administration’s Acting Commissioner Kilolo Kijakaz.

However, a separate government report showed inflation newly accelerating, a trend eating into the Social Security gains for older people. The Consumer Price Index rose 0.4% for September after just 0.1% in August and is up 8.2% for the past 12 months. Jobless claims for unemployment benefits rose for the week.

President Joe Biden has pledged to protect both Social Security and Medicare. “I’ll make them stronger,” he said last month. “And I’ll lower your cost to be able to keep them.”

About 70 million people — including retirees, disabled people and children — receive Social Security benefits. This will be the biggest increase in benefits that baby boomers, those born between the years 1946 and 1964, have ever seen.

Willie Clark, 65, of Waukegan, Illinois, says his budget is “real tight” and the increase in his Social Security disability benefits could give him some breathing room to cover the cost of the household expenses he’s been holding off on.

Still, he doubts how much of the extra money will end up in his pocket. His rent in an apartment building subsidized by the U.S. Department of Housing and Urban Development is based on his income, so he expects that will rise, too.

The financing setup dates to the 1930s, the brainchild of President Franklin D. Roosevelt, who believed a payroll tax would foster among average Americans a sense of ownership that would protect the program from political interference.

Next year’s higher payout, without an accompanying increase in Social Security contributions, could put additional pressure on a system that’s facing a severe shortfall in coming years.

The annual Social Security and Medicare trustees report released in June says the program’s trust fund will be unable to pay full benefits beginning in 2035.

In January, a Pew Research Center poll showed 57% of U.S. adults saying that “taking steps to make the Social Security system financially sound” was a top priority for the president and Congress to address this year. Securing Social Security got bipartisan support, with 56% of Democrats and 58% of Republicans calling it a top priority.

Some solutions for reforming Social Security have been proposed — but none has moved forward in a sharply partisan Congress.

Earlier this year, Sen. Rick Scott, R-Fla., issued a detailed plan that would require Congress to come up with a proposal to adequately fund Social Security and Medicare or potentially phase them out.

Senate Minority Leader Mitch McConnell, R-Ky., publicly rebuked the plan and Biden has used Scott’s proposal as a political bludgeon against Republicans ahead of midterm elections.

“If Republicans in Congress have their way, seniors will pay more for prescription drugs and their Social Security benefits will never be secure,” Jean-Pierre said.