Execution has been key for the Whitestown Post baseball team. 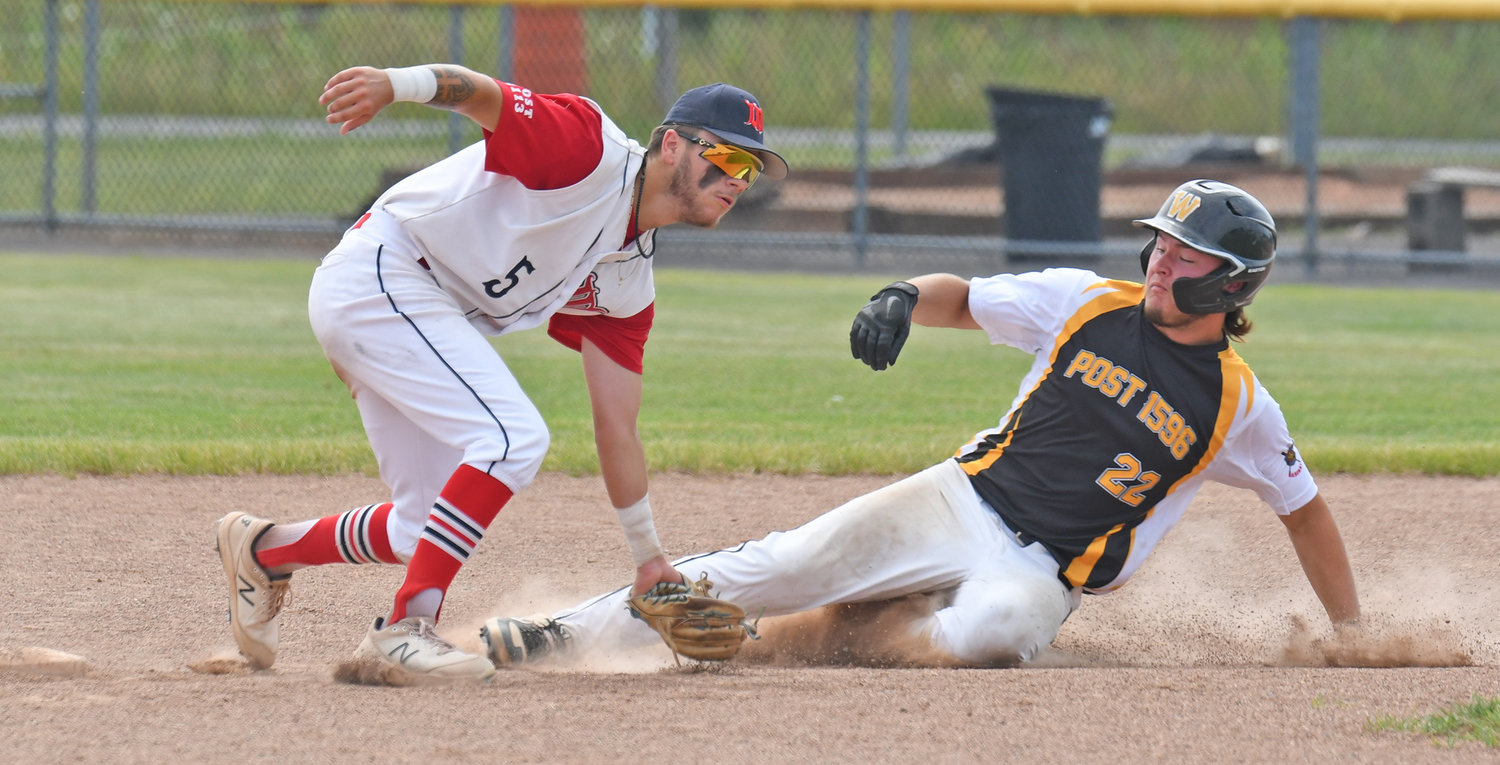 Whitestown Post's Dominic Bullis field a throw from the catcher as Harpursville's Jim Lindsley slides safely in to second Saturday at DeLutis Field in Rome. Whitestown Post won 4-3 to advance in the state Legion tournament. The team is scheduled to play at 10 a.m. Tuesday in Saugerties.
(Sentinel photo by John Clifford) 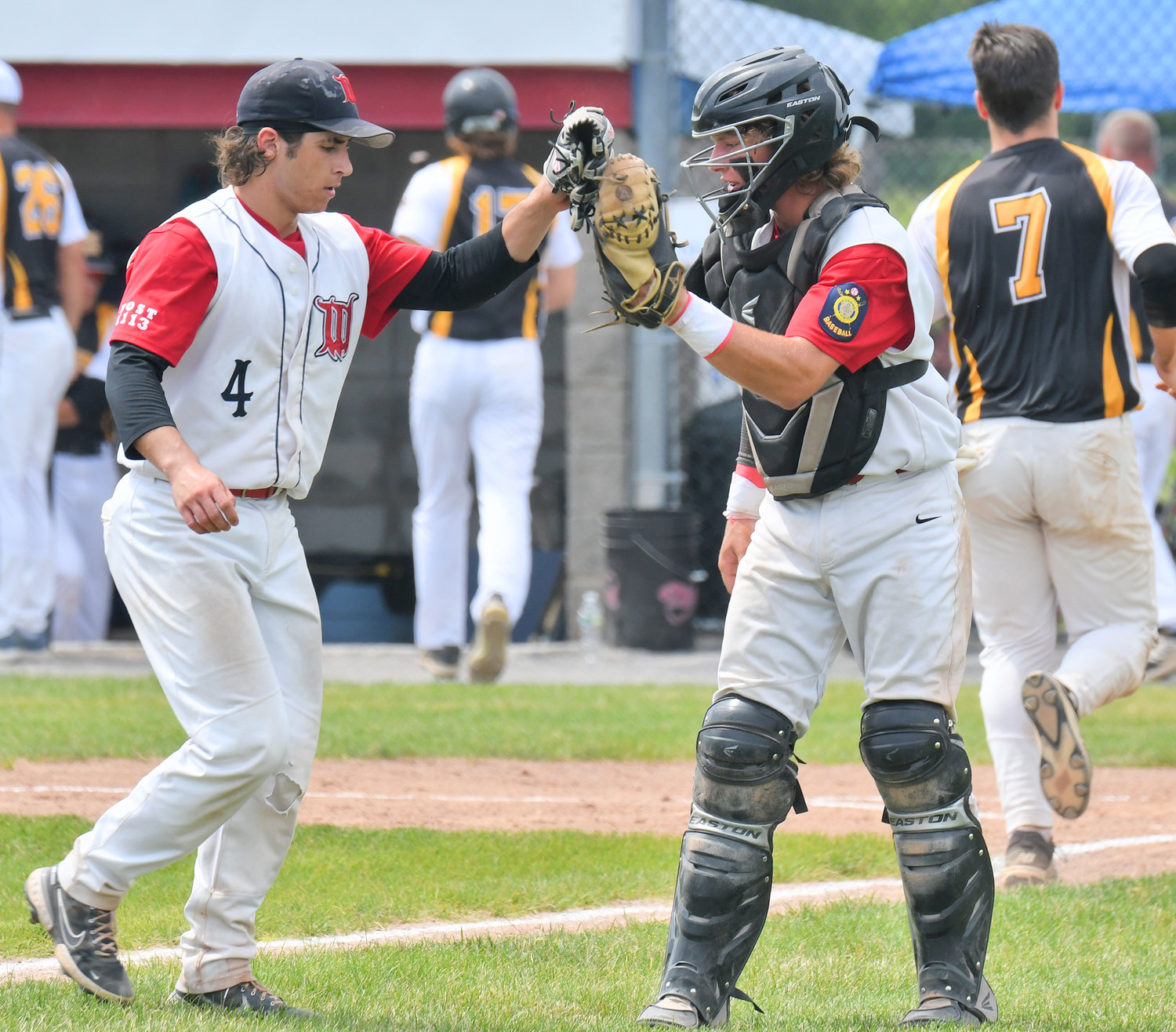 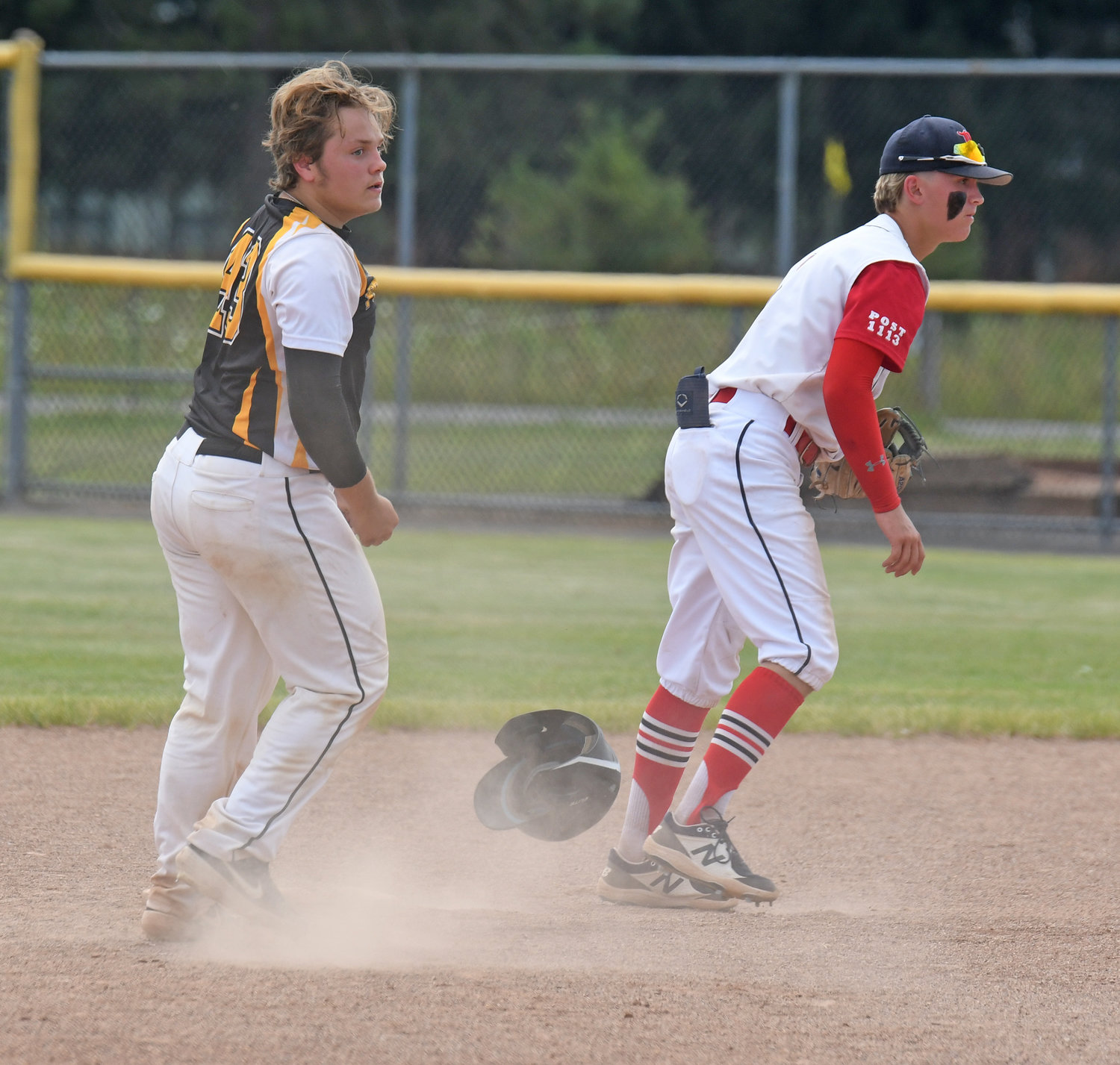 Harpursville's Dylan Decker slams his helmet after getting caught off base on a double play in the fifth inning Saturday in the state tournament Legion game at DeLutis Field in Rome. Harpursville's Chris Gross flew out to Ty Montrose, who quickly threw to Kody Czernastek at second to double off Decker. Whitestown won 4-3.
(Sentinel photo by John Clifford) 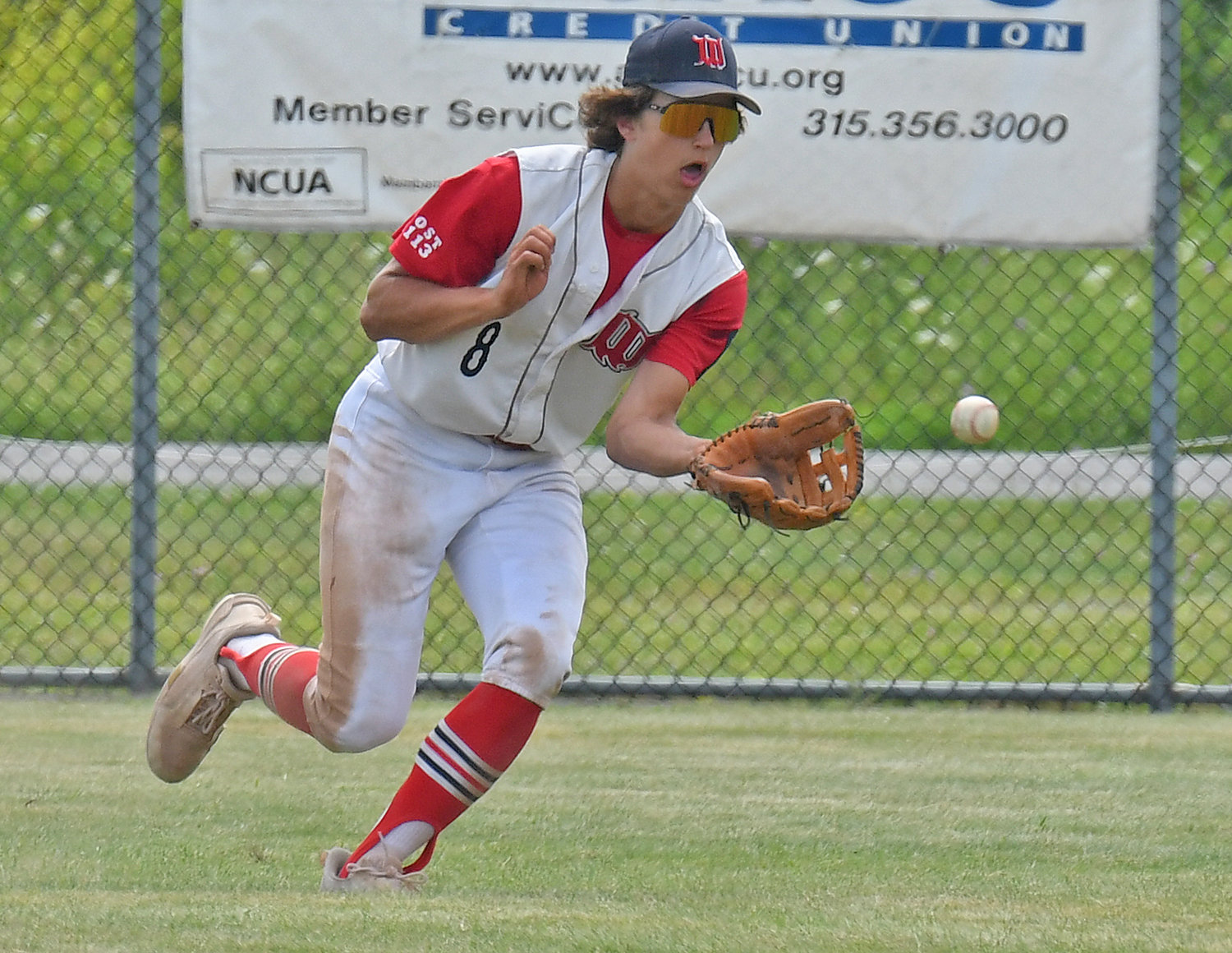 Whitestown outfielder Ty Montrose fields a ball in right field before throwing to first base to nearly get out Harpursville's Peyton Mosher in the bottom of the fourth inning Saturday at DeLutis Field of a state Legion baseball game. Montrose also had a single and later scored in the third inning in Whitestown's 4-3 win. Whitestown has won 15 consecutive games.
(Sentinel photo by John Clifford)
Previous Next
Posted Saturday, July 23, 2022 6:28 pm
Ben Birnell
Sports writer
email / twitter

ROME — Execution has been key for the Whitestown Post baseball team.

Kody Czternastek scored the go-ahead run on a sacrifice flyin the top of the seventh inning and combined with Caleb Miller to give Whitestown solid pitching performances to help the team earn a thrilling 4-3 victory over Harpursville Post in a first-round Legion tournament game on a hot afternoon at DeLutis Field.

“It feels great. I’ve been (with Whitestown) for about six years and being a leader for this team, I’m just trying to help my boys out,” said Czternastek, a shortstop who graduated from Whitesboro in 2021.

It is the 15th consecutive win for Whitestown, which earned a fifth overall District V Legion championship – and first since 2016 – on Tuesday after edging Smith Post 1-0.

Whitestown (21-2 overall) advances to play the Greece Post at 10 a.m. Tuesday at Saugerties’ Cantine Veterans Memorial Complex. Whitestown would also play later Tuesday, depending on the outcome. In a change in format, the tournament is double-elimination when four teams remain.

As the wise poet Robert Kelly Thomas said, “man, it is a hot one.”

On Saturday, Harpursville rallied tie the game in the bottom of the sixth. In the seventh, Czternastek led off with a single. Then, Dominic Bullis put down a quality bunt near the plate and beat out a throw to first while Czternastek advanced to third.
After Miller flew out to right field, Colin Skermont sent a ball to left field on the first pitch he faced. Czternastek broke for home, tumbling into home plate just ahead of a solid throw.
“I’m not a big sacrifice-bunt guy, but we’ve had to do it the last couple games. It has worked for us. We’ve gotten runs both times I’ve done it. It is just execution. Even though we’re not a big bunting team, we bunt every day in the batting cages,” said Whitestown coach Paul Englehart, who has 503 wins in 24 seasons leading the team. “I think we’re an above-average defensive team – one of the best I’ve had over the years – and we have confidence.”
Czternastek finished 2-for-2 with a walk and two runs for Whitestown, which is missing three key players for various reasons. Bullis was was 1-for-1 with two walks and two stolen bases. Ty Montrose had an RBI single and Brian Zbytniewski added a two-run single in the third when Whitestown built a 3-0.
Czternastek said the throw from the outfield on the winning run hit the back of his left cleat as he was a few feet from the plate.
“It was great because my teammates hit it to the outfield and that’s all we needed out of them to get a big, crucial winning run,” Czternastek said.
Miller – who started pitching a little bit last summer for Whitestown – turned in a solid six innings while throwing 93 pitches. He scattered six hits and had four strikeouts while issuing two walks. He had some trouble in the sixth when Caleb Walker hit an RBI double and then with the bases loaded hit Jim Lindsley with the 11th pitch of the at-bat to tie the game. Miller got a strikeout and groundout to end the threat in the sixth.
“Our team has no quit in us,” said Miller, who is 6-0 this season. “I thought it was a successful day on the mound. I have a great defense behind me.”
He said he’s happy with how things have gone on the mound. Engelhart said Miller – normally a catcher – does whatever it takes to win.
“The job’s not finished, so hopefully I get another game to pitch in the state tournament,” Miller said.
In the bottom of the seventh, Czternastek got a groundout, a strikeout and a flyout on 13 pitches to earn the save.
Englehart said Whitestown Post has “superior team chemistry” with a mix of players from Whitesboro and Westmoreland schools.
“You can’t coach team chemistry. Either you have it or you don’t,” he said. “We don’t panic."
District V Legion All-League team
Adrean Post 625 (9-7): Derek Baur, Mason Snell, Isaiah Zuchowski, Tyler Zyla.
Canastota Post 140 (1-15): Austin Ames, Culley Bellino.
Ilion Post 920 (11-5): Noah Carpenter, Nick Greene, Alan Meszler, Tanner Warren.
Moran Post 66 (8-8): Eli Ciani, Justin Critelli, Brian Gonzales.
New Hartford Post 1376 (6-10): Matt Greene, John Karwowski, Wyatt Young.
Oriskany Post 1448 (4-12): Kegan Kraeger, Andrew Pysnik.
Smith Post 24 (11-5): Damon Campanaro, Derrick Holmes, Marco Macri, Jacob Premo.
Utica Post 229 (8-8): Todd Abraham, Josh Duval, Parker Giruzzi.
Whitestown Post 1113 (14-2): Czternastek, Ty Kane, Miller, Montrose, Skermont.