If you asked the Whitestown Post players, to a man, they would say they expected to be right where they ended up Wednesday at Cantine Memorial Field ... 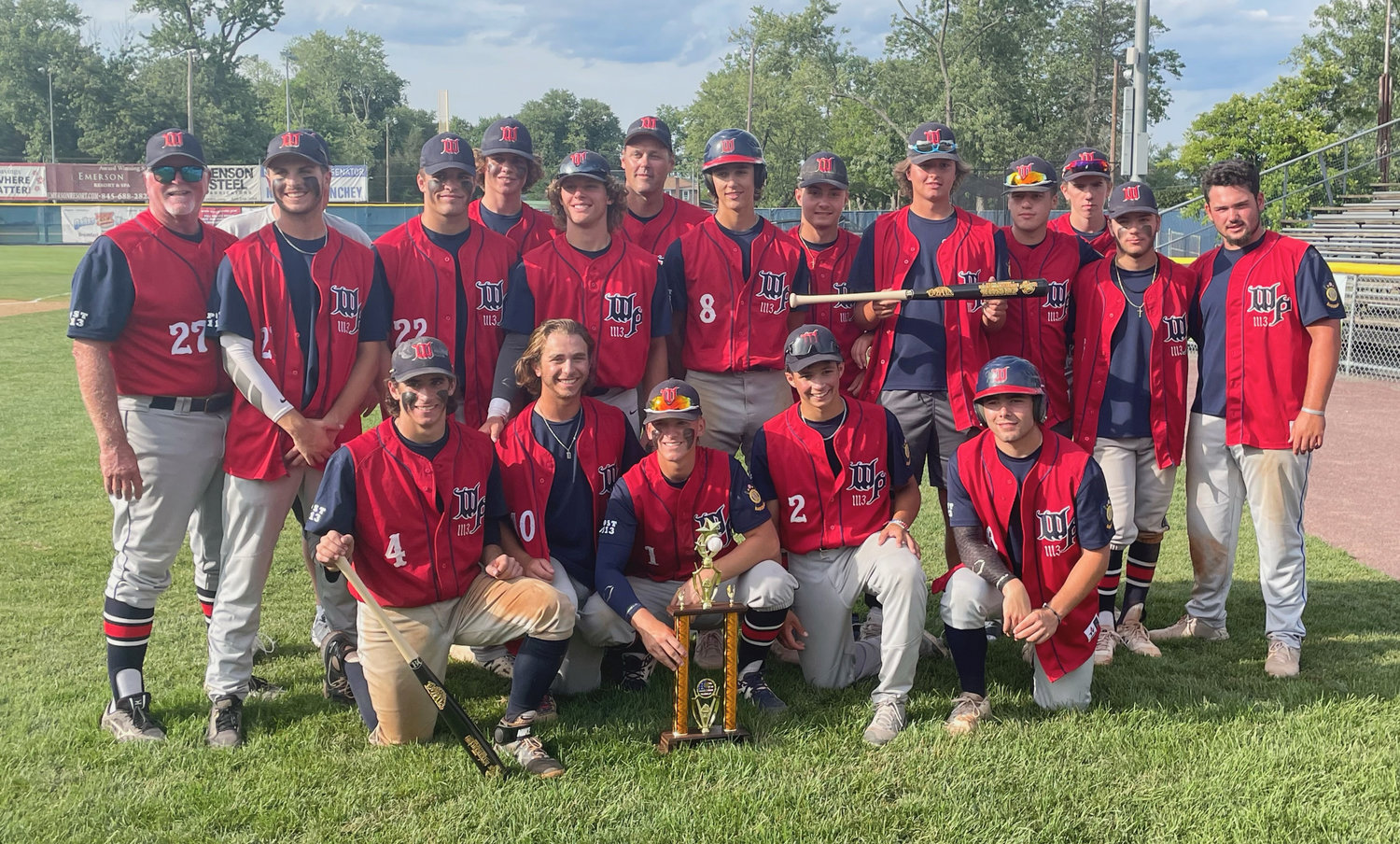 SAUGERTIES — If you asked the Whitestown Post players, to a man, they would say they expected to be right where they ended up Wednesday at Cantine Memorial Field — one of the final two teams left in the American Legion state baseball tournament.

And as injuries from a long season began to mount, it took all of them to make it to the championship game, where they fell to District VII champion Greece Post 5-2.

“It was an awesome run,” said Whitestown head coach Paul Engelhart. “We were running on fumes a little bit at the end. It was a long, hot two days with doubleheaders on both days.”

“We had a plan right from the first game today (a 6-4 win in the semifinal game) against Rockland, and we battled right until the last pitch of the second game,” Engelhart said, adding that as injuries and absences began to mount, the entire roster was needed to make it to the tournament’s final game.

Greece took a 1-0 lead in the bottom of the first inning in the championship game with Tanner DeGrasia, who walked, scoring on a double by James Capellupo.

Whitestown battled back in the top of the second inning to take a 2-1 lead. Owen Davison singled to open the inning and with two outs moved to second when Dominic Bullis walked. Caleb Miller then smashed a two-RBI single past third. The pair of runs were the only ones Greece allowed throughout their run through the state championship tournament.

Greece tied the game in the bottom of the second with Mike Salina scoring on a sacrifice fly by Jaden Madrid. Greece added another run in the third with DeGrasia slamming a triple and scoring on a single by Zack Allen. Greece added two more in the fourt inning to seal the contest with Tyler Stack, who singled, scoring on a double by Matt Salina and Salina latter scoring on an error.

Colin White took the loss for Whitestown while Drew Bateman picked up the win for Greece.

“It feels great to be the division champions and second in the state,” Bullis said. “We absolutely would have liked to have won but I feel really good about this group of guys and what we were able to accomplish.”

Despite having several guys go down at various points of the season, the district tournament and the state tournament, Bullis said the team just tried to keep grinding. “We have a lot of faith in each other and we all know that everybody on the team can play.”

“We have a lot of depth,” Miller added. “We got a lot of big performances from a lot of kids down here. Mike (Scalise), Anthony (Sawanec), Owen (Davison), Mitch (Holmes) and Josh all really performed great….Unfortunately, we came up a little short and it didn’t end the way we wanted it to.”

Miller, who finished the game with a pair of hits and walk, received the tournament’s Big Stick Award. Miller, who will play at Union College in the fall, batted .462 for the tournament with three doubles and three RBIs for the runner-up.

Whitestown advanced to the title game after improvising its way past the Rockland Pirates earlier in the day.

In that contest, Whitestown had jumped out to an early 1-0 lead with walks to Bullis, Miller and Ty Montrose. With the bases loaded, a groundout by Bryan Zbytniewski scored Bullis. Zbytniewski, who has struggled with injury all season, took the mound for Whitestown, gamely going two and third innings before being replaced by Bullis — a second baseman who has pitched only sporadically during his legion career.

Inheriting a 4-1 deficit, Bullis stymied the Pirates by spotting his fastball on both corners of the plate and keeping them off balance with an array of offspeed pitches.

“It felt great to come in,” Bullis said. “I’ve been telling coach all season that if he put me in I would just keep throwing strikes and getting people out,” he joked. “But it feels good to have delivered on that and to come through in that situation.”

Whitestown closed the gap to 4-3 in the fourth inning. After Holmes was hit by a pitch and Kody Czternastek singled, Miller pounded a two-RBI double off the wall in left.

Whitestown took the lead in the top of the sixth. Bullis singled to open the inning and moved to second on a walk by Colin Skermont. Both raced home on an RBI triple by Anthony Sawanec, who scored when a ball hit by Scalise couldn’t be fielded cleanly,