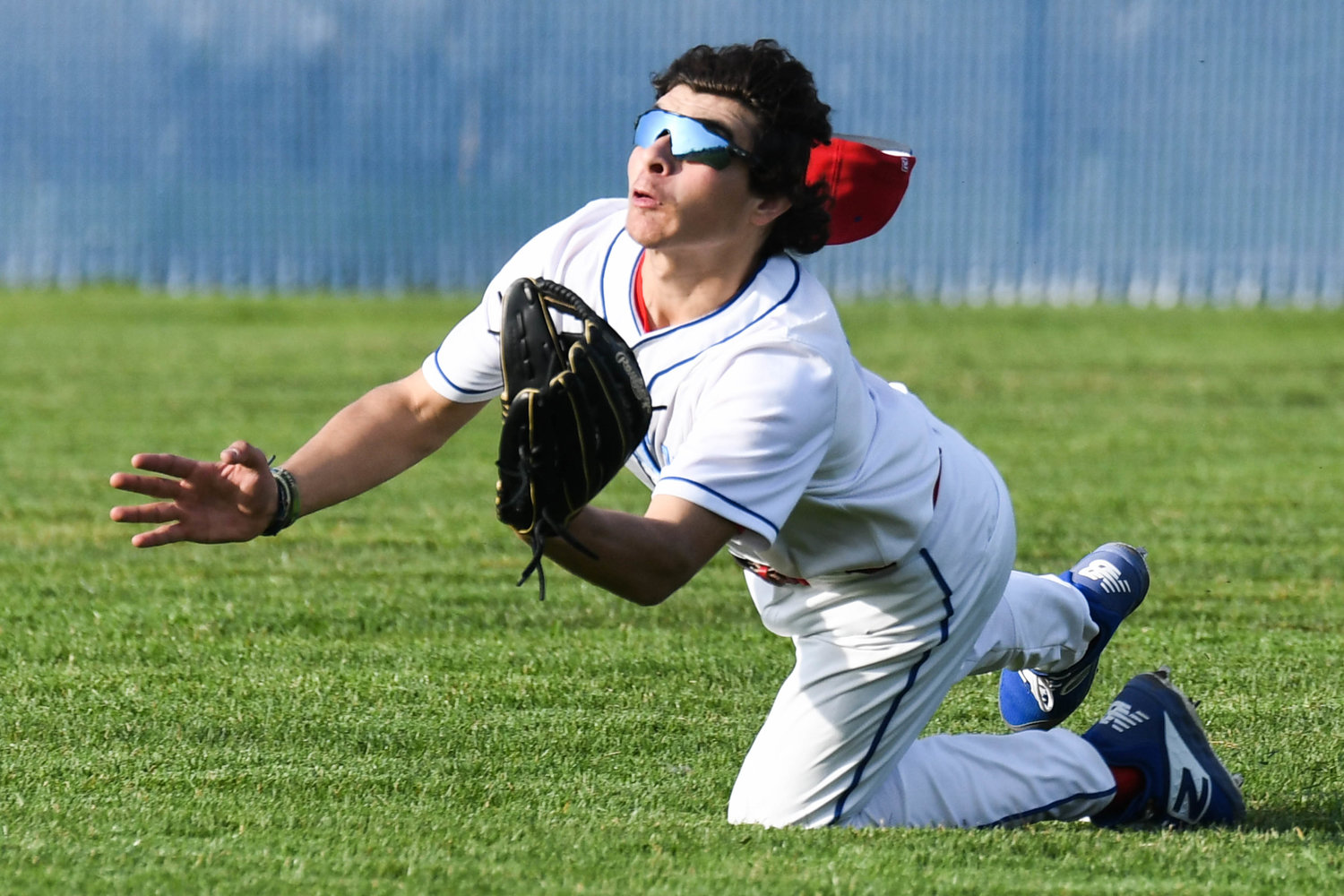 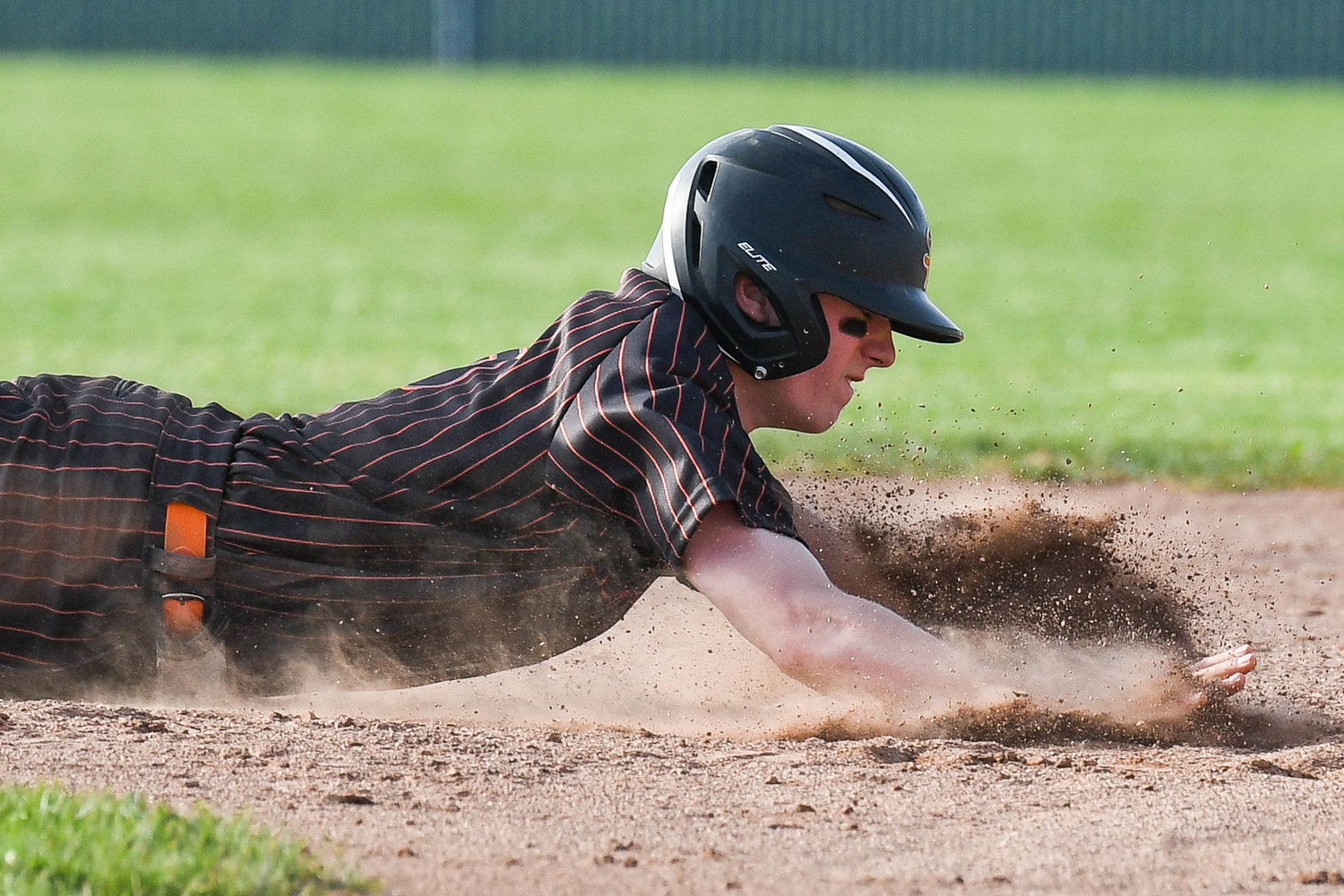 GET BACK — Rome Free Academy baserunner Jacob Premo slides safely back into second base during the game against New Hartford on Monday. Premo scored one of RFA's two runs but it wasn't quite enough, as the Spartans won 3-2. Premo went the distance on the mound for the Black Knights.
(Sentinel photo by Alex Cooper)
Previous Next
Posted Monday, April 25, 2022 9:08 pm

Colin Skermont tossed a no-hitter for Whitesboro in a 3-0 win at home Monday against Utica Proctor, the Warriors’ Tri-Valley League opener.

Skermont walked two and hit a batter but allowed no hits or runs in seven innings. He’s now 2-0 this season.

The Warriors scored one in the first, and it would be prove to be enough. They tacked on one in the fourth and another in the fifth. They did it with just two hits.

Ryan Cook had a hit, run and RBI for Whitesboro. Andy Pawloski had the other hit. Skermont and Dominic Bullis each scored a run.

Peyton Kimball took the loss on the mound.

Whitesboro and Camden each had a flury of late runs but the Warriors won 7-4 at the Oneida County Stop DWI Baseball Classic at Hamilton College Saturday.

Whitesboro built a 3-0 lead after four innings but Camden tied it 4-4 in the fifth and added a run to lead 4-3 in the middle of the sixth. The Warriors responded with four runs in the bottom of the sixth to take the lead again.

Cook improved to 2-0 on the season with the win.

Max Pawlowski had two hits including a triple for Whitesboro. He drove in two and scored two runs. DaShawn Hutchinson was 2-for-3 with two runs scored.

For Camden, Tyler Skinner had a single, double and two RBIs. Camden is 5-4 overall, 2-0 in the TVL. The Blue Devils were at Oneida in the TVL Monday. Results were not available at press time. They travel to league foe Utica Notre Dame at 5 p.m. Thursday.

RFA gets weekend walk-off win but fall to Spartans Monday

Two days after putting up 11 runs in a walk-off win, the Rome Free Academy offense was held to two hits and two runs in a 3-2 road loss against New Hartford in a Tri-Valley League matchup Monday.

New Hartford jumped on the Black Knights with three first inning runs off of starter Jake Premo. He settled down and went the distance with a complete game four-hitter. All three runs he allowed were unearned. He allowed four hits and struck out four.

But the Spartans’ pitching was up to the task. Starter Zach Philipkoski went five innings to earn the win. He gave up two runs, one unearned, on a hit and three walks with three strikeouts. Logan Clarey pitched 2/3 of an inning, allowing a hit and no runs. Matt Greene went the final 1 1/3 innings, allowing no hits or runs and striking out two.

The Rome Free Academy baseball team got a walk-off win 11-10 at home over Fayetteville-Manlius Saturday, in a see-saw game where the lead changed hands several times.

RFA led 3-1 after an inning. The Hornets tied the game 4-4 in the third then took an 8-4 lead an inning later. Down 9-4 in the bottom of the sixth, RFA scored six to lead 10-9. F-M scratched out a seventh inning run to tie it then the Black Knights answered with a run of their own to win.

Brandon Sharron started on the mound for RFA, going 3 1/3 innings and allowing six unearned runs on five hits and a walk. He struck out two. He got a no decision. Flint relieved him and picked up the win. He went 3 2/3 innings, allowing four runs, two of them earned. He allowed three hits and walked three while striking out four.

Maxwell Danaher took the lose on the mound, allowing an earned run on a hit and a walk in 1/3 of an inning.

Each team scored a first inning run but it was the Spartans who kept up the offensive pressure with three in the third and three more in the fifth. They added the eighth run in the sixth.

William Gall got the win on the mound, going five innings and allowing an earned run on three hits and walk. He struck out three. Collver and Greene each pitched a scoreless, hitless inning as well. Both struck out two and allowed one walk.

Statistics for Notre Dame were not submitted.

The Spartans play at NBT Stadium in Syracuse against Cicero-North Syracuse in non-league play at 7:30 p.m. Thursday.

The Jugglers host Camden at 5 p.m. Thursday in a TVL matchup.

On Friday in the Center State Conference, Little Falls scored three in the third to take a 5-1 lead, a lead the Mounties did not relinquish.

Matthew Prestopnik was the winning pitcher.

Alex McLaughlin took the loss on the mound for HP.

Luke Benedetto and Matthew Lux each had two hits for HP. McLaughlin had a hit and an RBI.

On Saturday, the Golden Knights tied the game at 2-2 with a run in the top of the seventh. They exploded for seven runs in the eighth to earn a 9-2 win in extra innings in non-league play.

Benedetto (1-0) got his first win on the season the mound.

Offensively for HP, Alex Hoole had three hits including a homerun, with three RBIs. Lux was 3-for-3 with 2 runs batter in. Andrew Jones was 2-for-4 with two RBIs.

Dawson Cole had a hit and two RBIs for Lowville.

HP is 4-4 overall, 2-1 in the league. The team traveled to Sherburne-Earlville Monday and will be at Canastota at 4:30 p.m. Wednesday. Both are league games.

In the Center State league game, the Bulldogs scored once in the first then pulled away with a six-run second inning. Westmoreland pounded out 15 hits on the day.

Miller also got the win on the mound, improving to 2-0. He went the distance, allowing two hits and a walk while striking out 13.

Devin Barnes and Nick Kosmoski had the two hits for Waterville.

On the mound, Kane Patterson took the loss, allowing 13 runs, nine of them earned, in four innings. He allowed 13 hits and walked two.

The Clinton baseball team scored all eight of its runs in the first three innings en route to an 8-2 win at Adirondack Friday.

Majka got the win for Clinton, going five innings while allowing one unearned run on two hits and two walks. He struck out nine. Matt King got the save, throwing two innings in relief while allowing an earned un on three hits and striking out three.

Colin White took the loss. He went 5 2/3 innings while allowing eight runs, three of them earned, on eight hits and four walks. He struck out seven.

Brett Sanford was 3-for-3 for the Wildcats, with a run scored.

Adirondack hosted Canastota Monday. Results were not available at press time. The Wildcats were at Carthage at 4:30 p.m. Tuesday.

Clinton lost 11-1 at Chittenango Saturday to fall to 2-3 on the season.

Clinton’s Jared Swift took the loss. He allowed eight runs, five of them earned, in 3 1/3 innings. He gave up seven hits and walked four while striking out five.

Majka and Soika each singled and doubled. Martino singled twice.

The Warriors hosted Mount Markham in the league Monday. Results were not available by press time. The team travels to Sherburne-Earlville for a 4:30 p.m. start Wednesday in the Center State.