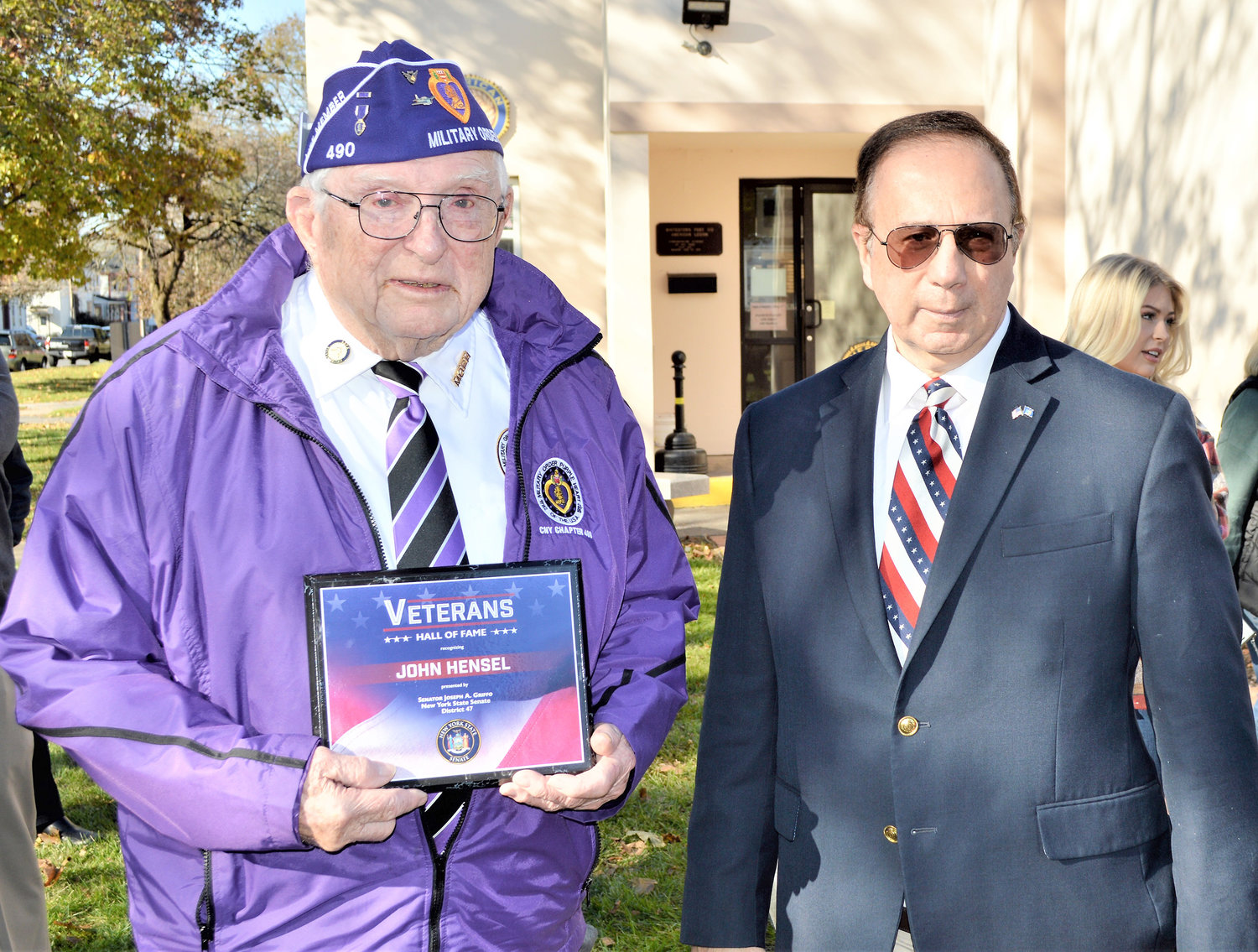 INDUCTED — John “Jack” Hensel, left, a Whitesboro resident and World War II veteran, receives a plaque from State Sen. Joseph A. Griffo, R-47, Rome, to commemorate Hensel’s induction into the New York State Senate Veterans’ Hall of Fame. The Hall of Fame was created to honor and recognize outstanding veterans from New York State who have distinguished themselves both in military and civilian life.
(Photo submitted)
Posted Friday, November 12, 2021 10:40 am

ALBANY — State Sen. Joseph A. Griffo, R-47, Rome, has announced that John “Jack” Hensel, a World War II veteran from Whitesboro, has been inducted into the New York State Senate Veterans’ Hall of Fame. The Hall of Fame was created to honor and recognize outstanding veterans from New York who have distinguished themselves both in military and civilian life.

Griffo recognized Hensel at a Veterans Day ceremony in Whitesboro. Hensel received a plaque, poster and book to commemorate his induction.

“It is an honor to recognize Jack and all the other men and women who are being inducted this year into the Senate’s Veterans’ Hall of Fame,” Griffo said.

“Jack selflessly served his nation in the Navy and has remained dedicated to helping other veterans and their families in the region. He is the epitome of the ‘Greatest Generation,’ and we are eternally grateful for all that he has done on our behalf,” Griffo added.

Hensel, 96, was drafted into the Navy on June 22, 1943, one day before receiving his high school diploma. While serving on the Navy Aircraft Carrier U.S.S. Franklin CV-13, which was nicknamed “Big Ben,” Hensel volunteered as an aircrewman and flew combat missions as an aerial gunner in a VT5 torpedo bomber.

During the U.S.S. Franklin’s launch operations on March 19, 1945, two 500-pound Japanese bombs hit the carrier without warning. The bombs exploded and ignited the gasoline lines lying on the carrier’s deck along with the remaining planes that were loaded with bombs and rockets. During the attack, Hensel, then 20 years old, time, was severely burned and blown off the carrier and into the ocean.

After regaining consciousness in the water, Hensel, who was still wearing all his clothing that included heavy shoes and a steel helmet strapped under his chin, struggled to stay afloat in the rough seas.

“I remember seeing the burning carrier going away from me,” he recalled years later. “I remember several sailors popping to the surface with me. They had a strange stare with no expression, and in my struggle they just seemed to disappear. I thought afterwards they must have been killed. For a few moments, I felt all alone in the wide ocean and scared,” He recalled.

Eventually finding a raft, Hensel and some other sailors were rescued by the U.S.S. Hickox and taken to a hospital ship to recover. Hensel was among the more than 400 wounded; another 800 crewman were killed in the attack.

Hensel is the recipient of several awards and honors, including the Purple Heart.

Jack married the late Mary Follett in 1949. The couple resided in Whitesboro and had six children: Richard, Jill, Mary-Lynn, Nancy, John and Mark. They also are the grandparents of 15 grandchildren and nine great-grandchildren.