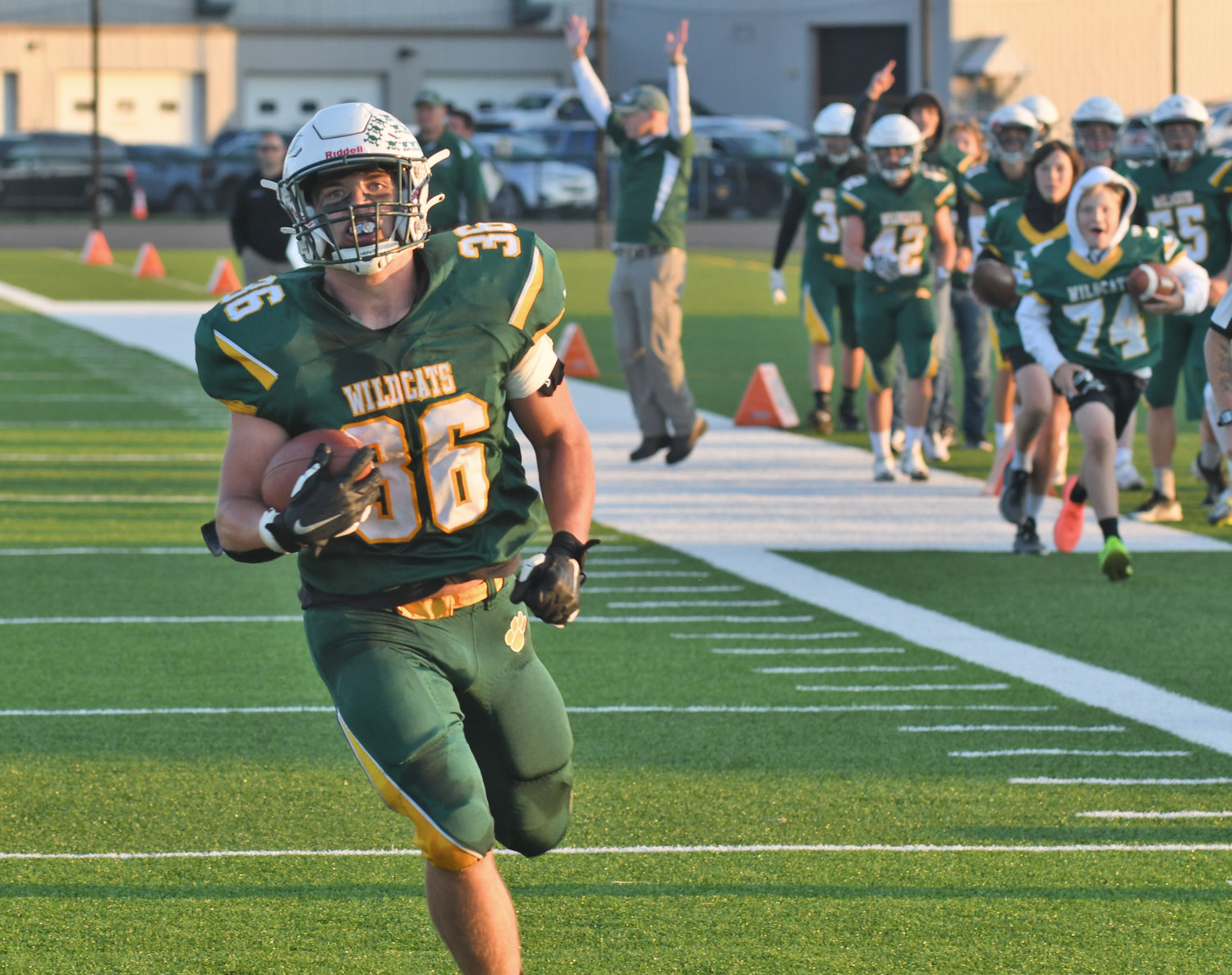 Adirondack senior running back Colin White scores his third of six touchdowns in Thursday night’s Class C-2 contest against visiting Vernon-Verona-Sherrill with a happy Wildcats’ sideline in the background. White rushed for 239 yards and a school-record six touchdowns in Adirondack’s 62-27 victory.
(Sentinel photo by John Clifford) 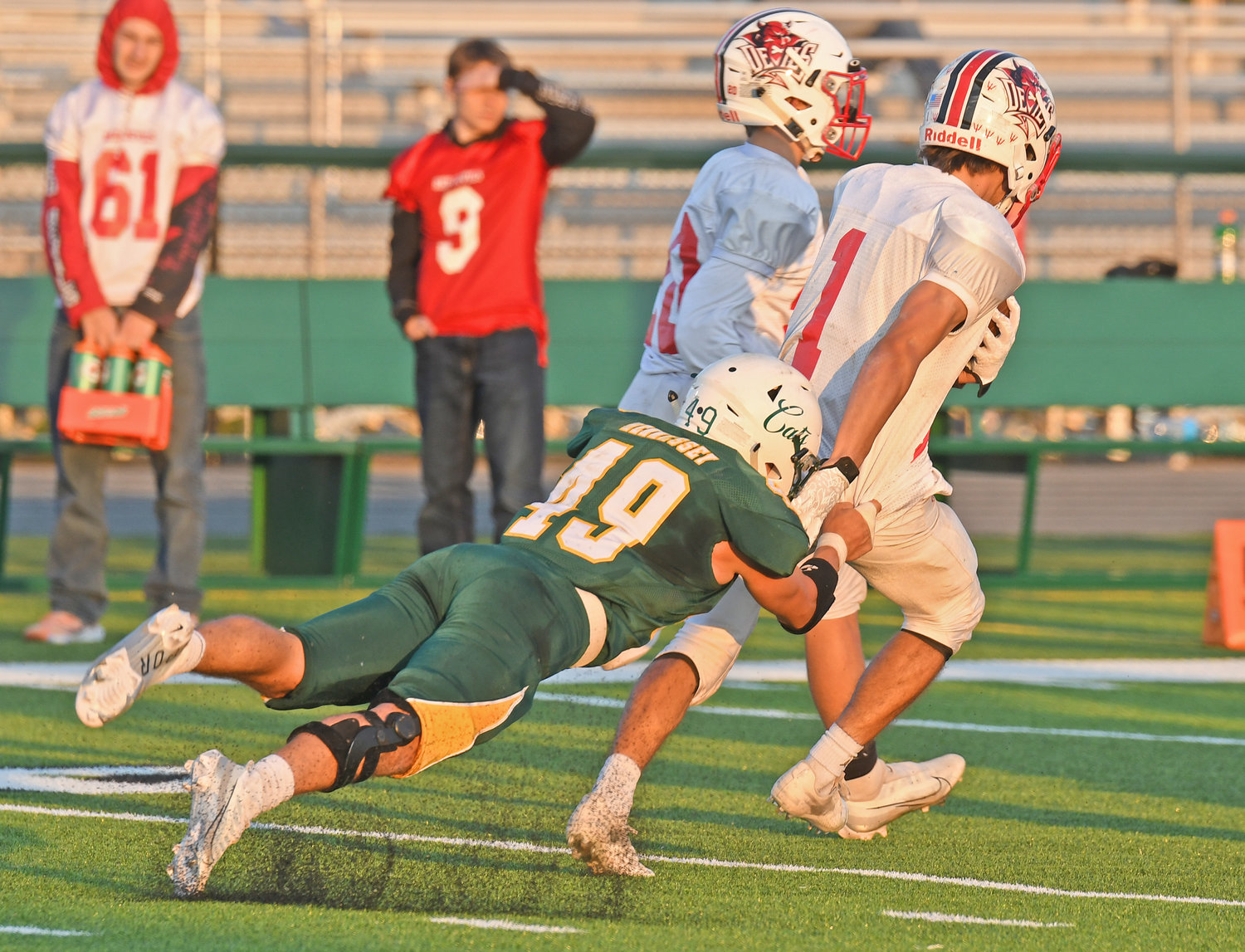 Adirondack’s Ray Hennessey gets ahold of Vernon-Verona-Sherrill’s James Wheeler IV and brings him down in the second quarter of Thursday night’s Class C-2 game in Boonville. Wheeler IV had a pair of rushing touchdowns and threw for another in the Red Devils’ 62-27 loss.
(Sentinel photo by John Clifford) 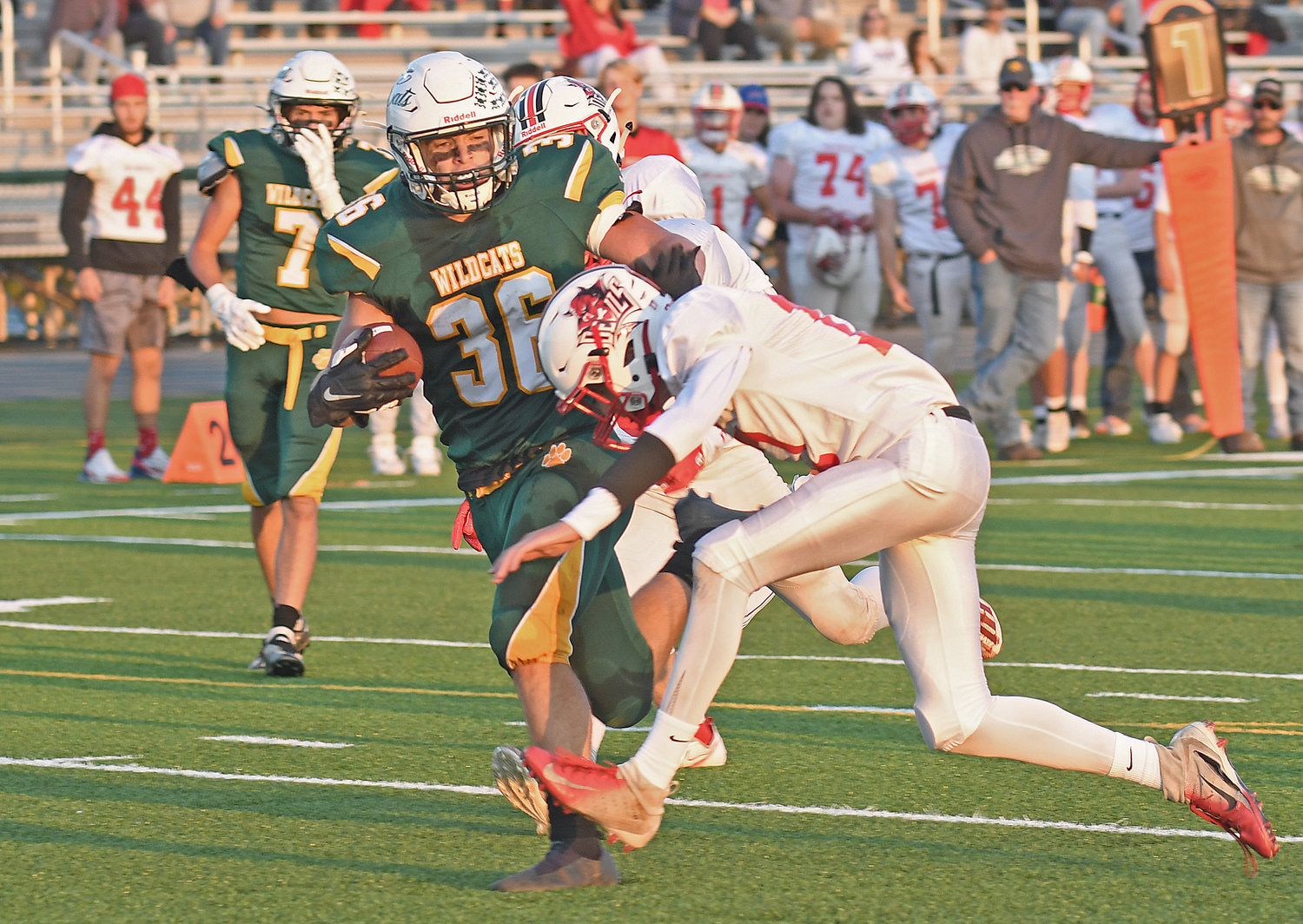 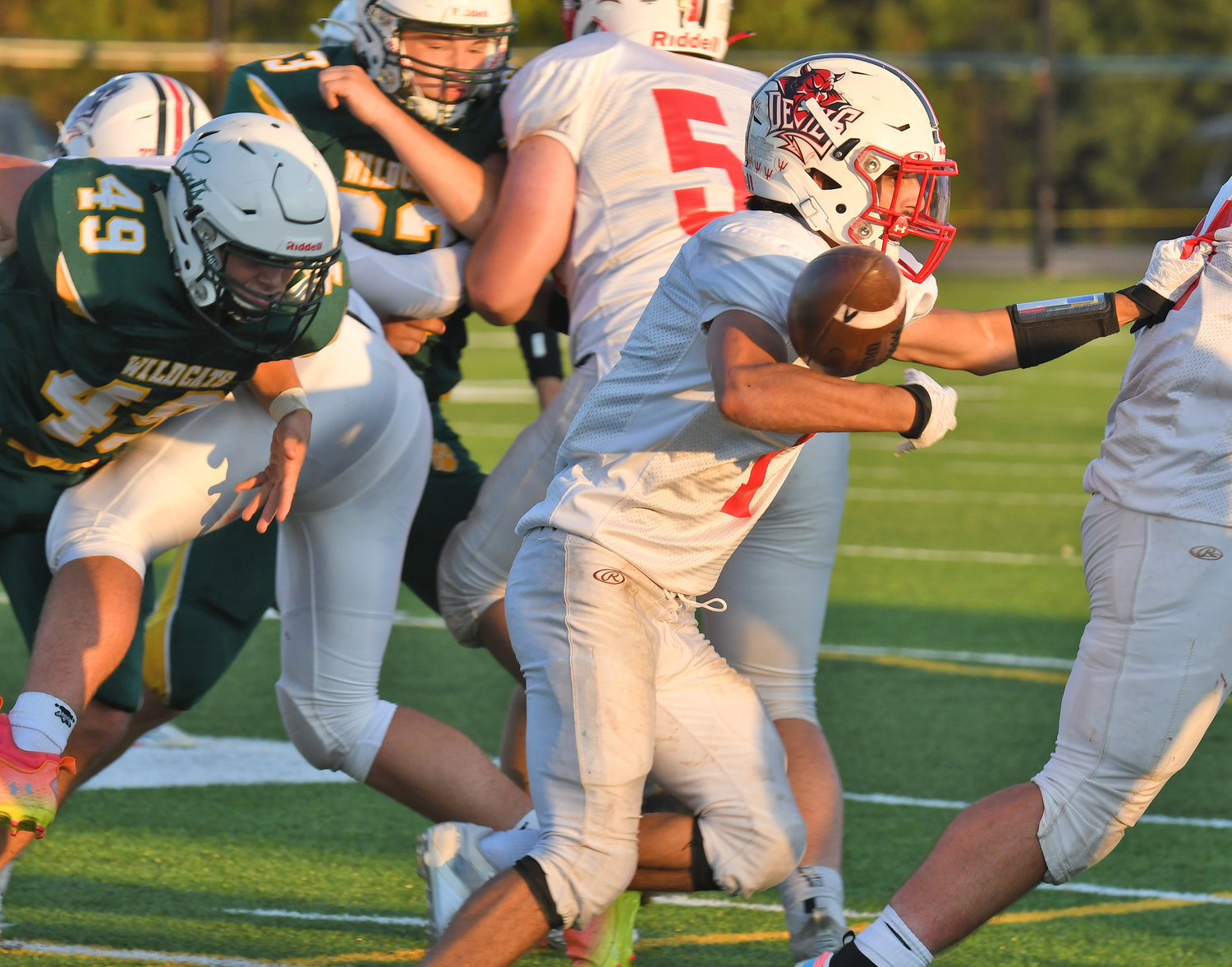 Vernon-Verona-Sherrill's James Wheeler IV loses the handle on the ball with Adirondack's Ray Hennessey zeroing in on the play and eventually recovering the fumble in the Class C-2 game on Thursday night in Boonville.
(Sentinel photo by John Clifford) 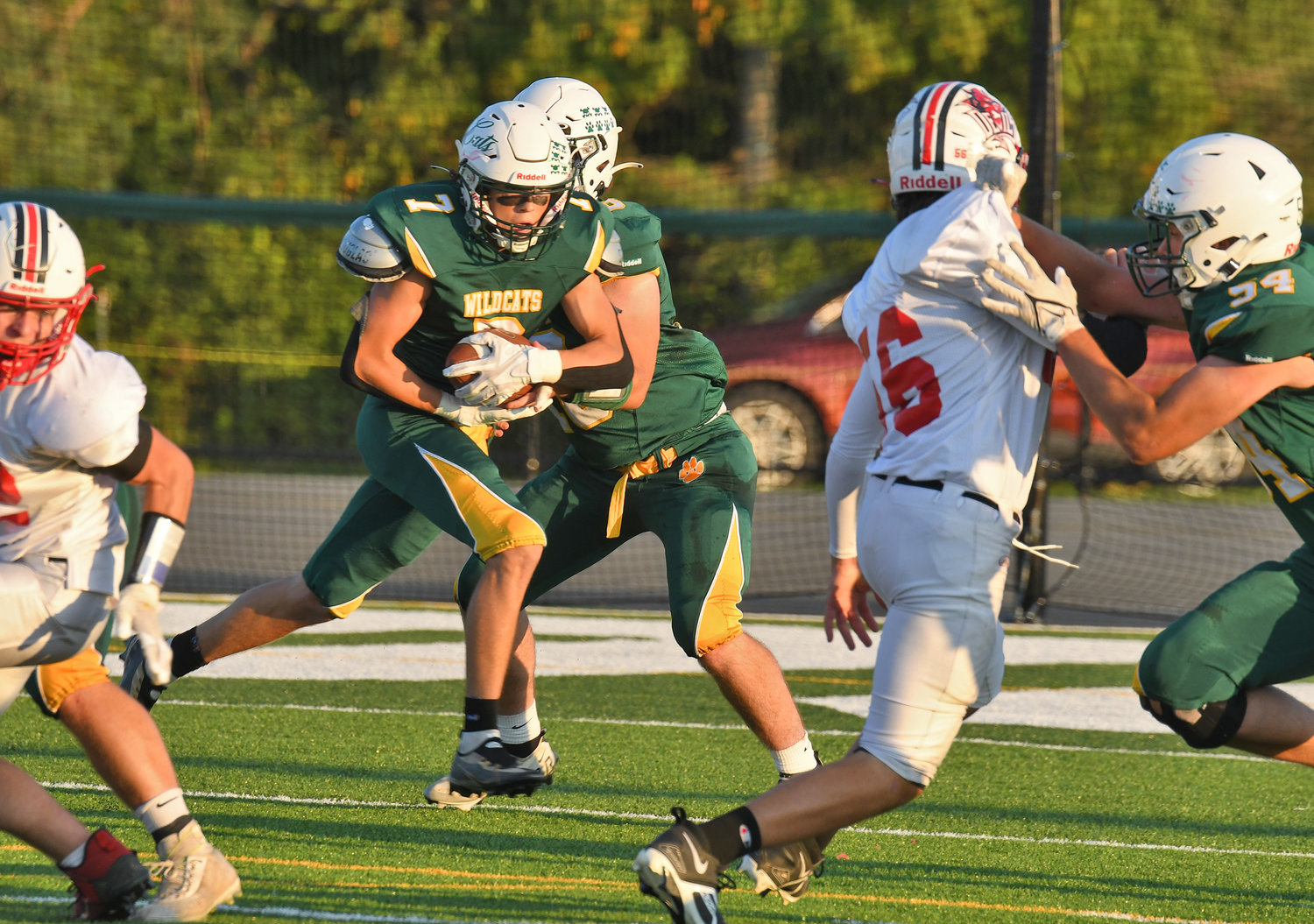 Adirondack's John Hennessey gets the hand off from Brett Sanford and rips off a run to get the offense going in the first quarter against VVS on Thursday night in Boonville.
(Sentinel photo by John Clifford)
Previous Next
Posted Friday, September 16, 2022 7:39 pm
Todd Dewan
Sports editor
email

White scored six touchdowns including five in the first half and converted a pair of two-point conversions for 40 points to break the previous school record of 39, held by Cody Hitt that he set in 2007. White’s six touchdowns broke the school record of four that was set by Mark Jenks and Rick Vernold during the 1970 season and matched more recently by Chad Bourgeois, who did it twice.

“That’s not just my record, it’s everyone’s record,” said the 6-foot, 210-pound White. “Everyone contributed to that.”

It was the first meeting between the two schools on the gridiron since 2003. Both teams are competing in Class C this season as Adirondack moved up from Class D and VVS dropped down from Class B. The Wildcats were the runner-up in Class D last season.

White rumbled for touchdown runs of 18, 46, 37 and 25 yards in the first half and punctuated a dominant first half by the Wildcats with a fifth touchdown, when he returned an interception 25 yards to pay dirt on the final play before halftime.

“Coach (Rob Hennessey) prepared us for that. It was a crossing pattern. I read it good and made a good play for it,” White said.

The Wildcats, who won their seventh straight home game and improved to 2-0 this season, led 38-7 at halftime even though the Red Devils scored the first touchdown of the game on the opening drive. Senior running back James Wheeler IV scored on an 18-yard touchdown run up the middle and freshman James Ward made the first of three point after touchdown kicks.

“They came out on us tough, we just had to get our mindset right,” White said.

White’s final touchdown came on the opening play from scrimmage in the second half as he sprinted 76 yards for a score on the only offensive play the Wildcats would run in the third quarter. White ended up with 239 yards rushing on just eight carries and scored two of the Wildcats’ seven successful two-point conversions, one rushing and one on a pass from senior quarterback Brett Sanford.

Adirondack scored twice more in the third quarter to close its scoring out as sophomore John Hennessey ran a punt back 75 yards for a touchdown and older brother Ray Hennessey, a senior, returned a kickoff 80 yards for the other score.

“I don’t know when we’ve had that in a game before,” said their father and Adirondack veteran coach Rob Hennessey, who is in his 23rd year with the program. “I haven’t seen it before; maybe in a JV game.”

“It’s a pretty good combination between Brett at quarterback, Ray and Colin at running back, John at jet and the other kids. It’s kind of pick your poison,” coach Hennessey said.

Senior Keagan Davenport led the Wildcats defensively with eight tackles, while Ray Hennessey had seven tackles and recovered a fumble.

Adirondack travels to Southern Hills at 7 p.m. on Friday, Sept. 23.

“We came out flat and had zero intensity. We responded well. I’m extremely happy,” coach Hennessey said. “We played defense, got stops and got a couple of turnovers. The hurry up offense got them on their heels and swung the momentum.”

“We’re heading in the right direction,” he added. “We have to refine some things and clean some things up. We just have to be ready to dictate on our terms and make people play Adirondack style of football, especially in the hitting aspect offensively and defensively.”

Camden exploded for a 35-0 halftime lead Thursday, winning 35-21 over visiting Cortland in Class B.

Noah Morse started the scoring with an early 41-yard touchdown run. He scored on a 15-yard run near the end of the first quarter after Trey Kimball’s eight-yard TD.

Cortland scored three short rushing TDs in the second half — Wyatt Tinker from 2, Danny Jackson from 3 and Ryan Kline from 1.

Dean was 4-for7 passing for 68 yards and the two scores. Morse led the team with 66 yards rushing. Kimball ran for 51 yards.