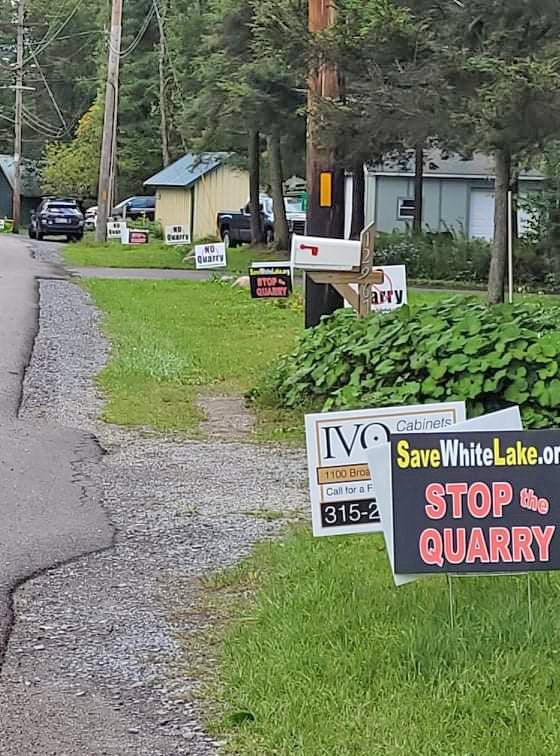 MAKING THEIR OPPOSITION KNOWN — Signs opposed to a proposed pink granite quarry near White Lake dot the lawns of residents in the Forestport community with several residents speaking against the project in this file photo from the summer of 2021.
(Sentinel photo by Megan Plete Postol)
Posted Wednesday, January 5, 2022 9:30 am
Megan Plete Postol
Staff Writer
email

The White Lake Quarry project application has been deemed complete and is now being considered by leaders of the Adirondack Park Agency and the New York State Department of Conservation.

“APA continues to coordinate with DEC on this project and anticipates bringing the proposal to the Agency Board for their consideration in 2022,” APA Public Information Officer Keith McKeever has confirmed.

The application originally filed in the spring of 2021 proposed to create a pink granite quarry on Stone Quarry Road in Woodgate.

The project has created significant turmoil among residents of the White Lake area.

Citizen activists have been busy working to convince decision makers to reject this application. A website was created and a petition was circulated that collected thousands of signatures against the quarry project.

The Adirondack White Lake Association, a group of landowners with the collective goal to protect the waters of White Lake from environmental threats, hired an outside expert to review the quarry application. That expert reported the application to be substantially lacking in crucial studies of the impact to adjoining wildlife populations, water quality, and more.

The APA board hosted a virtual board meeting in December in which the public was allowed to submit comments.

Thirteen residents signed up to deliver arguments against the project.

“I’ve been a resident of White Lake for 45 years and have done several projects and had to comply with the rules set by the APA and DEC,” Sheila J. Cuccaro, of Point Road, Woodgate, stated.

“While my projects have had direct impact on the shoreline, being construction of boathouses, nothing I’ve done has had a direct impact on the population, human or animal, much less the environment. We were made to follow the letter of the law but that doesn’t seem to apply to the Quarry project,” Cuccaro said.

“This project impacts, air, wetlands, (which were previously red tagged in his prior application) wildlife, flora, soil, noise, pollution and unsafe traffic and yet there has been no full Environmental Impact Study, no Noise Pollution Study and no Traffic Study. The word of the petitioner has not been questioned by either agency. A 25-year project with blasting within 1,000-feet of homes, 5.5 days a week, over 200 trucks a week (in and out of Stone Quarry Road) on a winding two lane road is a tragedy in the making — a liability the state cannot afford,” she said.

“This goes against the basic tenets of both the DEC and the APA,” Cuccaro said. “The rules are in place to protect the great park, the environment, the inhabitants… animal and human, and need to be strictly enforced to preserve the same. They are to be applied to all parties using the same gauge without favoritism. Therefore, I strongly urge your board to deny this application. It will have nothing but a detrimental effect on every aspect of life and environment in White Lake.”

The Adirondack White Lake Association and other White Lake property owners remain committed to their mission of fighting the project.

“During the course of the public sessions we have asked dozens of questions,” Ralph Cossa, of Old Ice House Road, Woodgate, stated during the meeting. “Has anyone read the mining experts’ report outlining the many application deficiencies? Has the APA done due diligence on Red Rock Quarry Associates? Have the APA and DEC standards changed since 2000 when a similar application was deemed incomplete? Where is the hydrology study? Where are the actual ambient noise measurements? To date, we have received no answers. All we hear is ‘thank you for your comments, who’s next?’ Our lawyers wrote to the DEC and APA asking that the Adirondack White Lake Association be granted party status regarding this application weeks ago; we have yet to receive the courtesy of a response. So I repeat, where is the transparency? Please answer our questions and tell us what’s going on and what comes next.

“Also,” Cossa questioned the APA, “You said an application would not be deemed complete by the staff if facts were missing so please explain why the 2021 White Lake Quarry application was deemed complete when information identified as lacking in their prior application in 2000 was still missing this time around?”

The FOIL documents on the APA’s website were last updated December 10, 2021. It is not yet been determined when the quarry application review will be complete.