Wheeler, defense key for VVS in win over rival Oneida

Wheeler, defense key for VVS in win over rival Oneida 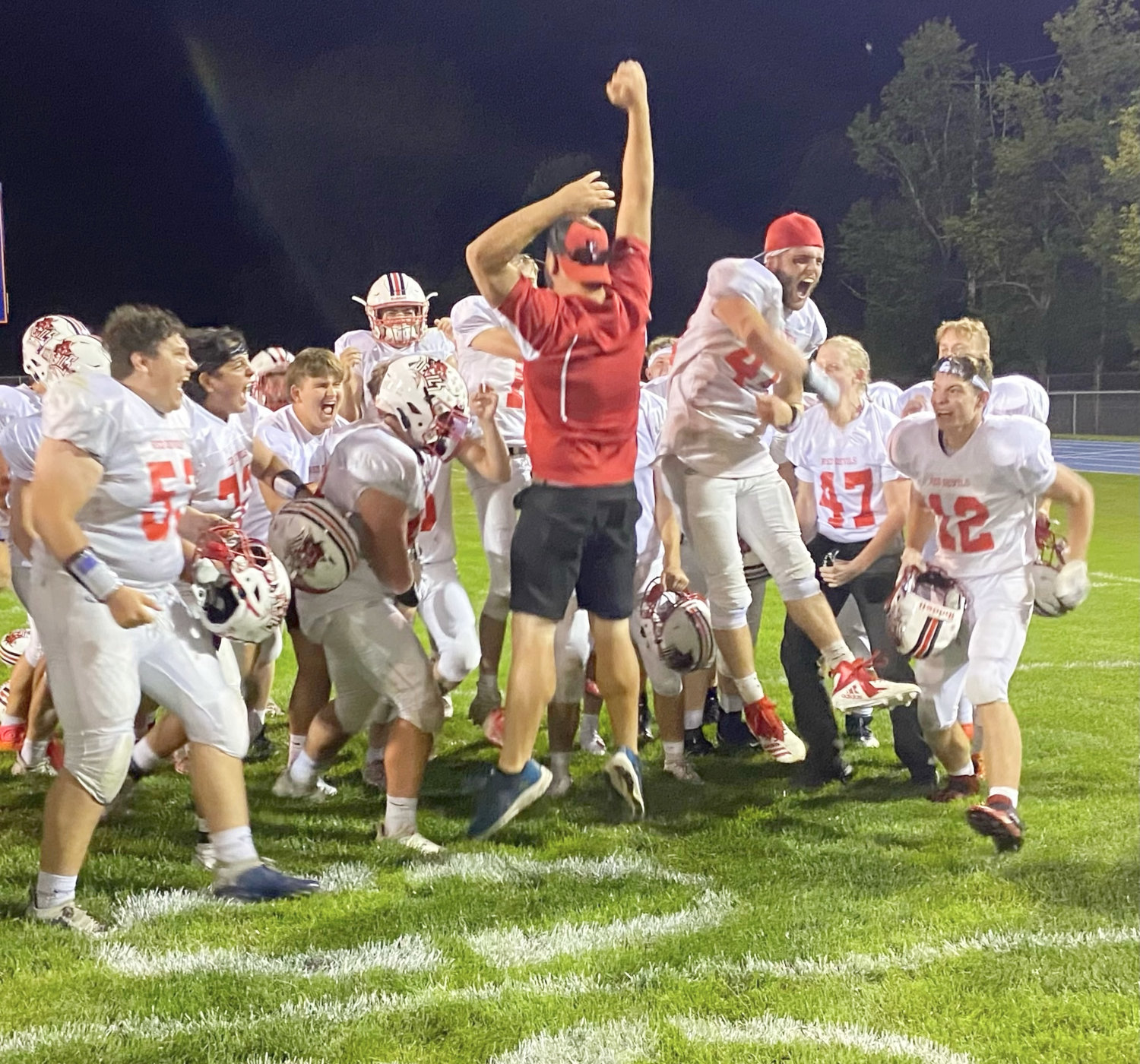 The Vernon-Vernona-Sherrill football team celebrates after a 14-0 victory over host Oneida on Friday. It was the 72nd meeting between the rivals.
Posted Friday, September 2, 2022 11:37 pm
Ben Birnell
Sports writer
email / twitter

The senior’s prize came as part of the rivalry game between VVS and Oneida, which is sponsored for the first time by Hood. Most Valuable Players on offense and defense were awarded following Friday’s Week 0 game between the rivals, who have met more than 70 times since 1951.

Wheeler was the easy selection after helping the re-loading Red Devils in the second half with more than 100 yards and an insurance touchdown late to help VVS score a 14-0 victory over Oneida on a picture-perfect evening in front of a packed crowd. The team also got timely stops from the defense.

That doesn’t mean Wheeler, a four-year starter with much quickness, wanted to keep the small trophy he received from officials post-game for himself.

“I wish there were more to give to the linemen. My success is nothing without them,” said Wheeler, who noted there were three new players on the offensive line including a freshman. “They did a great job opening up holes for me. Can’t be thankful enough for them.”

Wheeler finished with 153 yards rushing on 22 carries, capping a monster second half with a 43-yard scamper down the left side late in the fourth quarter to clinch the win. He also had two catches for 10 yards.

It was yet another big game for Wheeler, who finished with more than 1,300 yards and 18 touchdowns in the fall 2021 season. He was limited to just less than 30 yards at halftime Friday, but appeared to be taking a majority of the team’s wildcat formation snaps in the second half.

“We expected it to be successful,” said Gary Oliver, who is in his 19th year leading VVS. “James is one of the better backs in the area, I believe. … He just needs a little gap there and eventually he’s going to find it.”

The team had a handful of plays called back because of holding penalties.

VVS holds the all-time record against Oneida with a 35-33-4 mark. This season, Oneida is in Section III's Class B while VVS is in Class C.

For the record, senior linebacker Matt Rossi earned the defensive player of the game honors for a unit that limited Oneida to 111 total yards. VVS forced Oneida to punt on its first drive of the second half and got a turnover on downs on back-to-back drives after that.

“Our defense came together great,” Oliver said. “They came on very strong just in the last week of learning the defense. Trying to do everything in two weeks to play in Week 0 is very difficult.”

Both teams used the game as way to figure out some details. Oneida is now coached this season by Matt McCoy – a former VVS player under Oliver and standout at then-Utica College – and VVS is weighing its options after a majority of the offense graduated last spring.

“(Friday) was the whole offense. It wasn’t just me,” Wheeler said.

VVS took the lead on its first drive of the game, taking nearly nine minutes off the clock in the first quarter while going 74 yards. VVS converted on a fourth-and-long situation when junior Charles Foster – making his first varsity start – lofted up a ball to Tyler Wittmann for a 36-yard score.

“We didn’t really know what we had. So, this really helps the morale of the team,” Oliver said. “We need to keep improving."

Central Valley Academy jumped out to a 12-0 lead in the first half with help from a 45-yard touchdown run by Sam Jaquays and Connor Dempsey’s 40-yard touchdown catch.

However, Section II’s Fonda-Fultonville got a touchdown before the half.

The team took the lead on a five-yard run by Owen Hicks late in the fourth quarter to steal the win.

Jacquays finished with 88 yards on 19 carries. Braden Moreau had 74 yards passing and the touchdown.