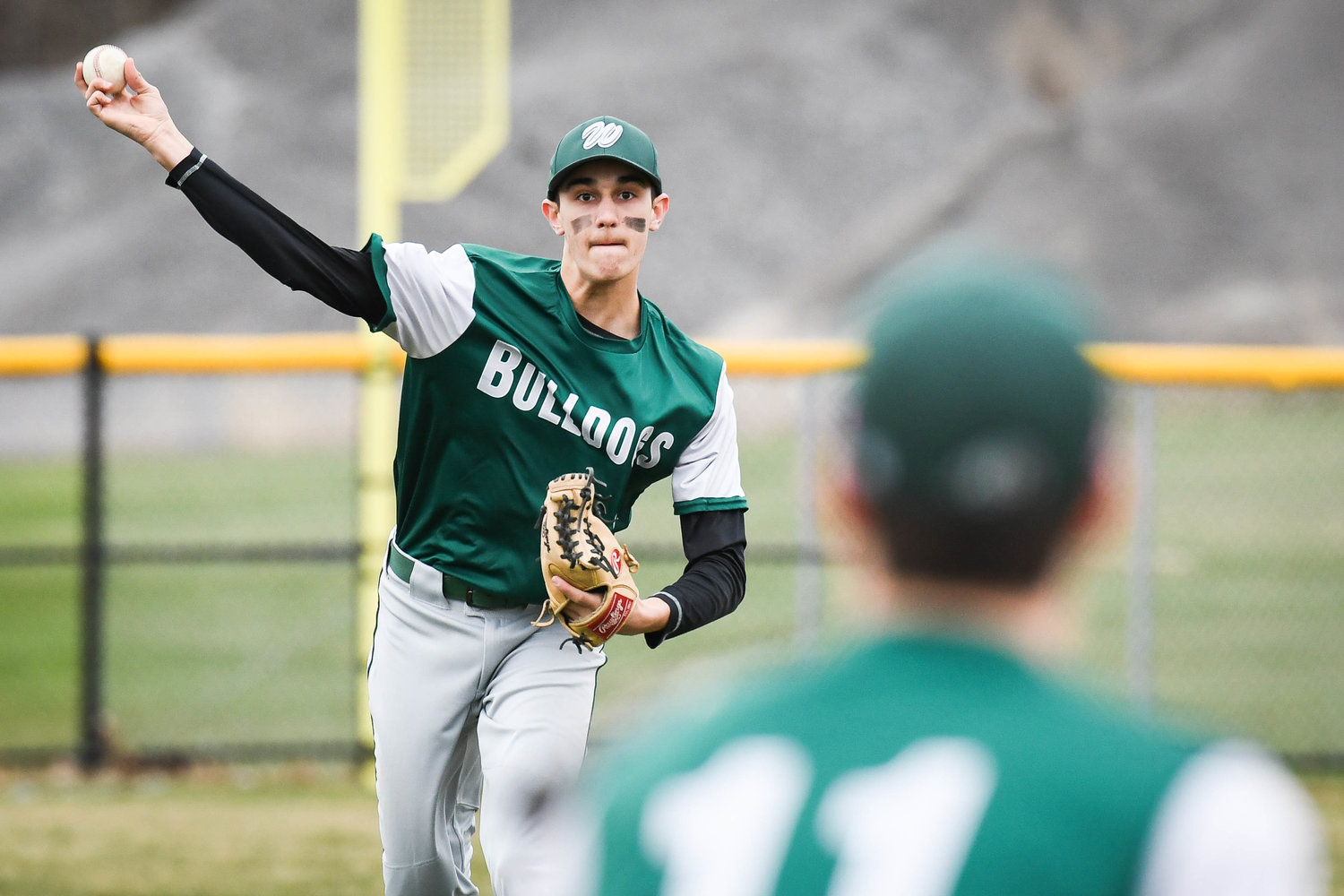 Westmoreland's Hunter Kierpiec throws to first base during the game against Adirondack on Monday. The Bulldogs won 11-0.
(Sentinel photo by Alex Cooper)
Posted Tuesday, April 19, 2022 8:28 pm 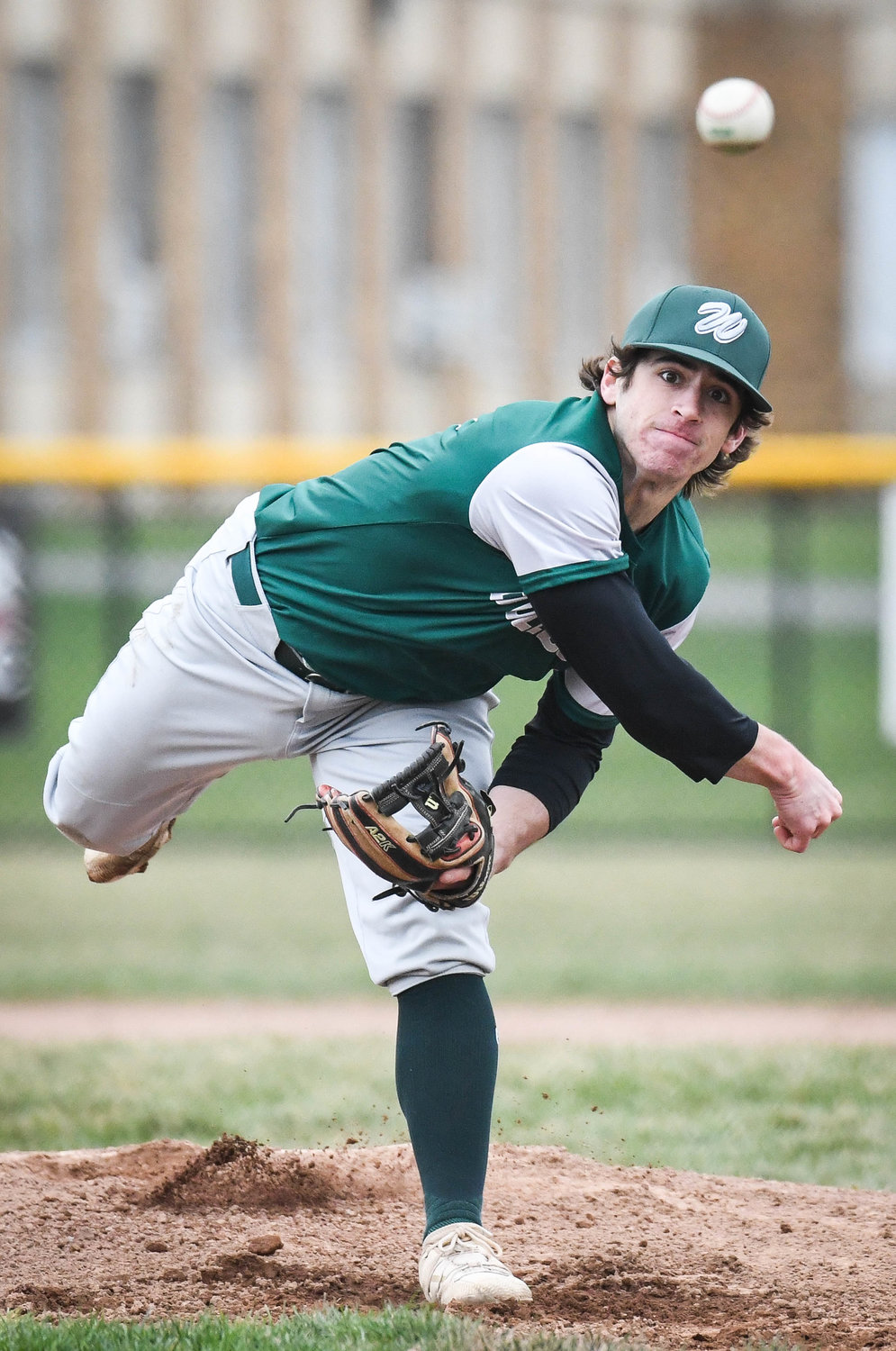 BULLDOG ON THE MOUND — Westmoreland pitcher Caleb Miller delivers a pitch during the game against Adirondack on Monday. Miller earned the win, going 6 2/3 innings while allowing three hits and walking one while striking out 11. The Bulldogs won 11-0.
(Sentinel photo by Alex Cooper) 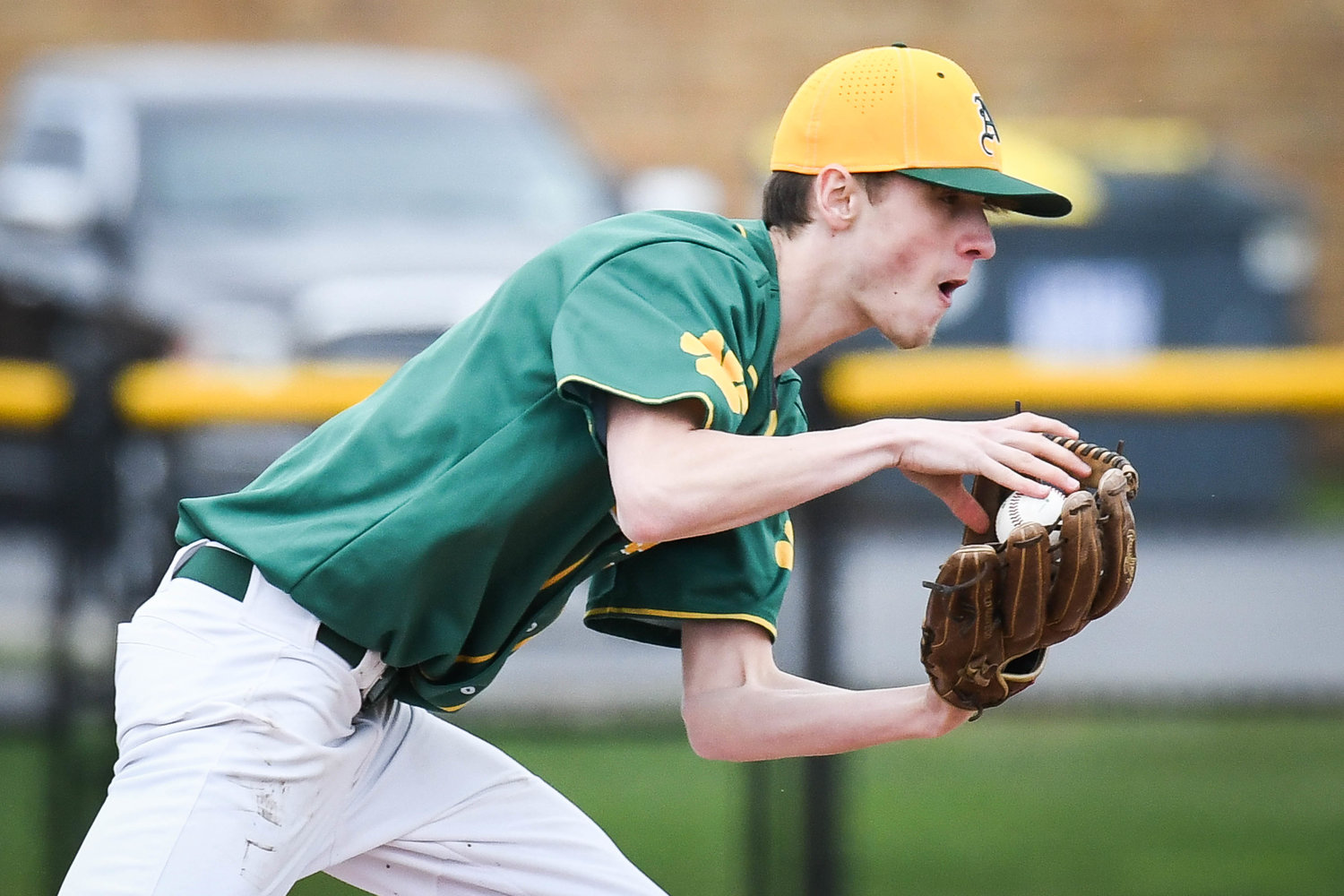 FIELD AND FIRE — Adirondack player Christopher Strobel fields a ground ball at shortstop during the game against Westmoreland on Monday. The Wildcats lost 11-0.
(Sentinel photo by Alex Cooper) 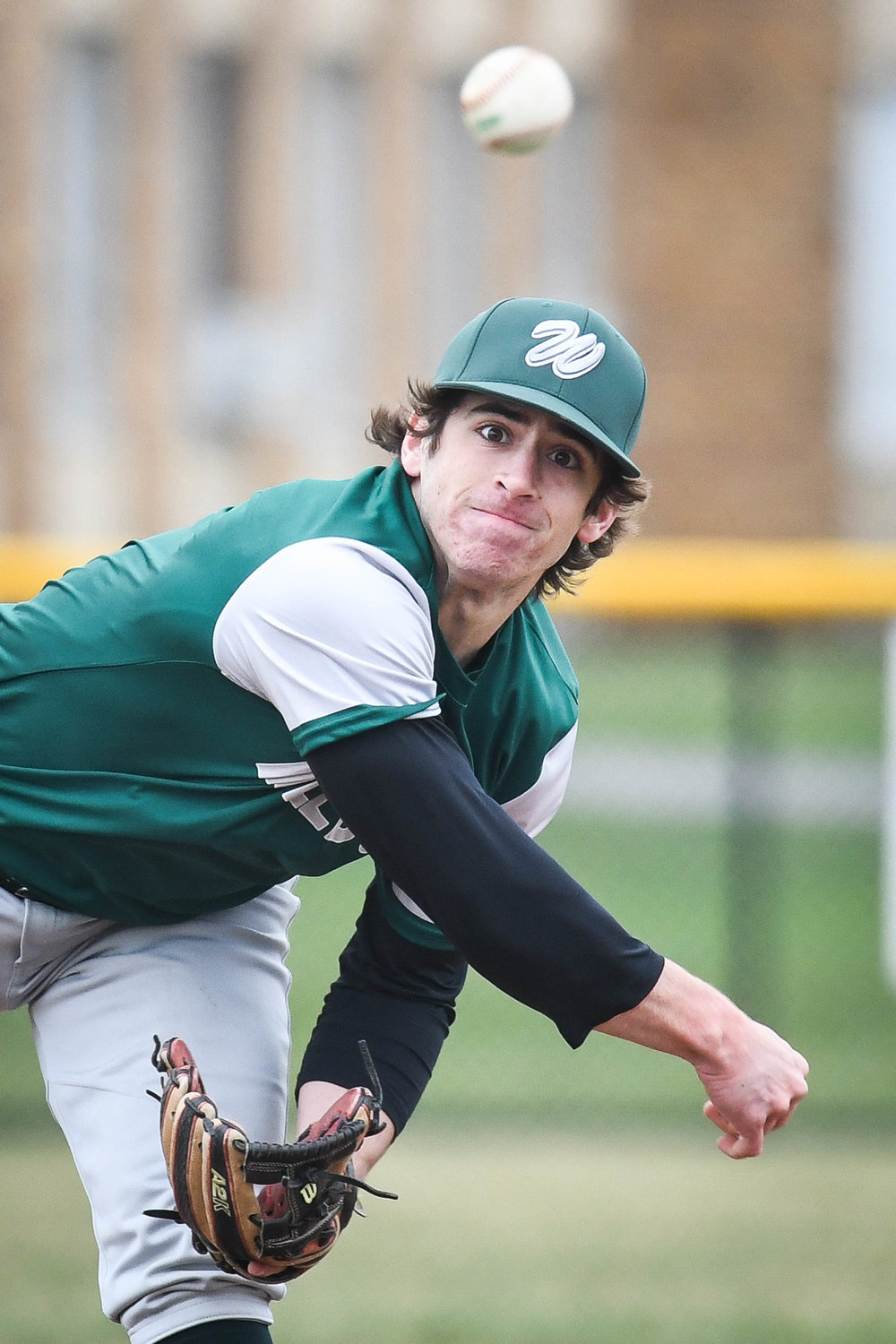 Westmoreland pitcher Caleb Miller delivers a pitch during the game against Adirondack on Monday.
(Sentinel photo by Alex Cooper) 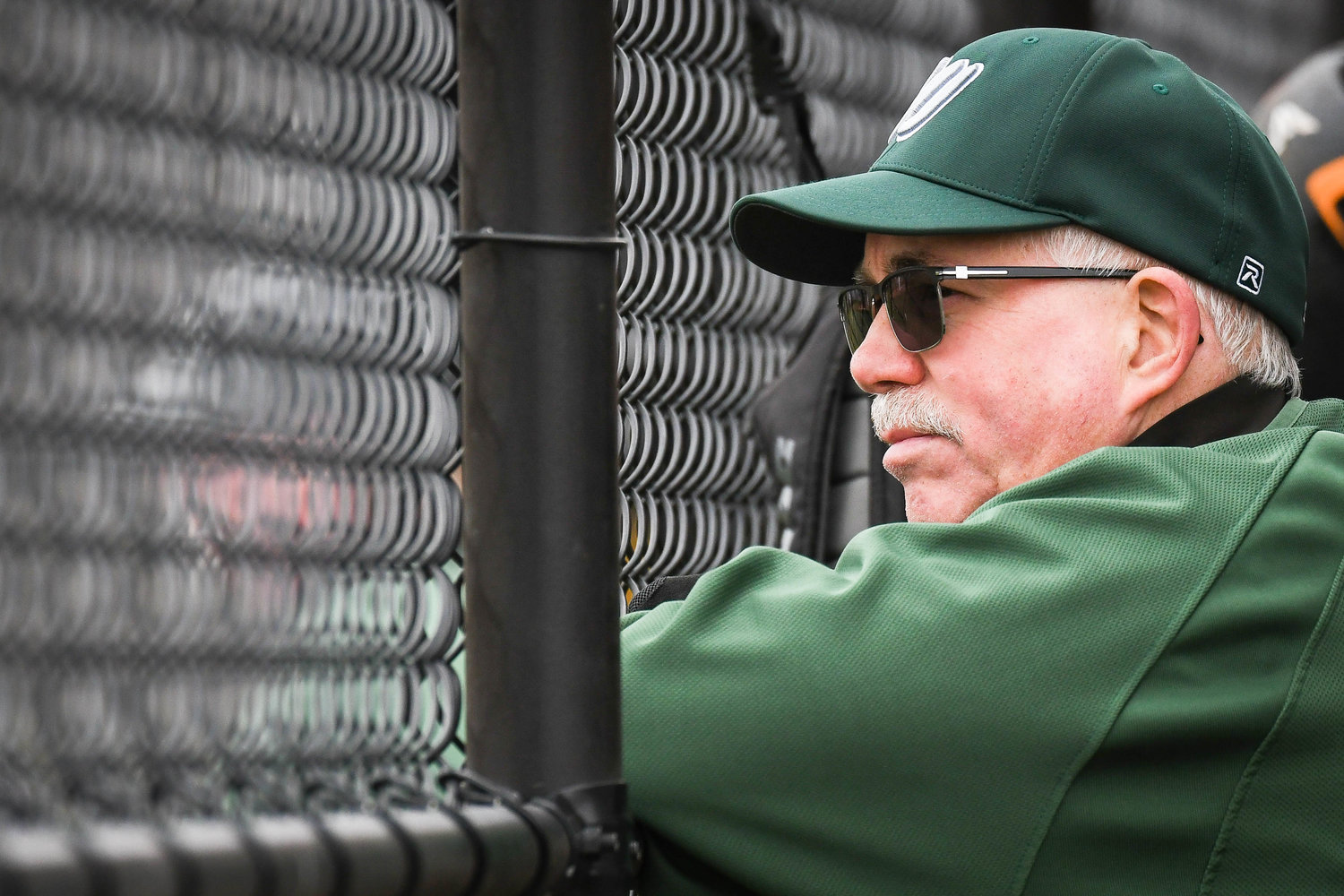 Westmoreland assistant coach Gerry Schaller looks on the field from the dugout during the game against Adirondack on Monday.
(Sentinel photo by Alex Cooper)

Westmoreland and Adirondack played four innings of scoreless baseball Monday, then the host Bulldogs scored five in the fifth and six more in the sixth to blow the doors open in an 11-0 non-league win.

Caleb Miller earned the win on the mound and is 1-0 on the season. He threw 6 2/3 innings, allowing three hits and walking one while striking out 11. Josh Suber retired the final batter, the lone batter he faced.

Mike Scalise led the Westmoreland offense with three singles and two runs scored. Mitchell Holmes had a hit, two walks, a run, an RBI and a stolen base. Jerry Fiorini doubled, walked twice and scored twice.

Oriskany scored a total of five runs in the fourth and fifth innings to overcome a slim lead by host Clinton Monday and won 6-4.

The teams traded a run each in the first then the host Warriors added a run in the second. But Oriskany took a 3-2 lead in the fourth and grew the lead to four with three more in the fifth. Clinton closed the gap to 6-4 with a pair of sixth inning runs but that’s how the score stayed until the end.

Alex Burrows got the win for Oriskany, going 5 2/3 innings with two unearned runs allowed on four hits and a walk. He struck out three. Christian Grant got the save, getting the final four outs while allowing two earned runs on five hits and a walk.

Grant had two hits, drove in a run and scored once as well. Ty Zizzi doubled and drove in one while Karsten Bates doubled and scored. Eddie Wright had a hit, two RBIs and two runs scored.

Connor Karwowski had two hits, three runs batted in and scored a run in New Hartford’s 7-1 win at home over Vernon-Verona-Sherrill in the Tri-Valley League Monday.

VVS got its lone run in the first but the Spartans grabbed the lead for good with a two-run second inning. They added four in the fourth to put the game out of reach.

Zach Philipkoski went 5 1/3 innings for the win on the mound. He allowed an earned run on four hits and a walk. He struck out seven.

New Hartford is set to host Whitesboro at 4:30 p.m. Thursday in the TVL.

VVS is slated to host Thomas R. Proctor at 4:30 p.m. Thursday in the league.

The Morrisville-Eaton baseball team scored seven runs in the first two innings to take a big lead en route to a 12-2 win at home over Sauquoit Valley Monday.