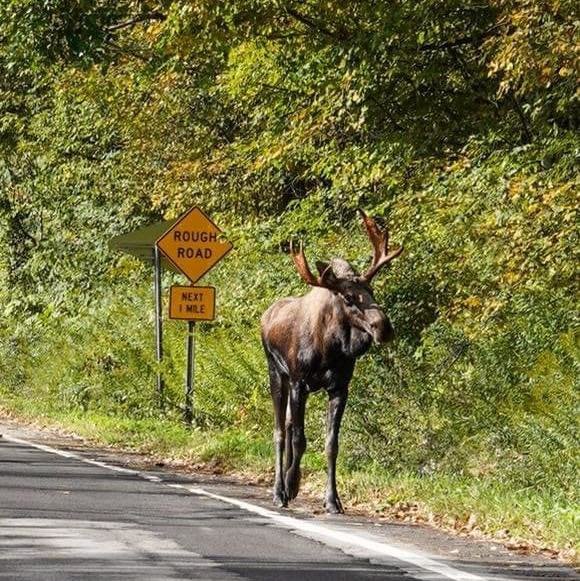 ENJOYING THE SCENERY — While a fall trip through “The Gorge” is typically picturesque because of the changing leaves, a bull moose is a sight to behold as it makes its way along Route 46 in Boonville in this photo from the Boonville community Facebook page. The state Department of Environmental Conservation advises drivers to exercise caution while traveling through parts of the Adirondacks — and other locations where moose have been spotted — as the moose mating season approaches and males start wandering.
(Photo courtesy Boonville Community Facebook page/Lauren Breedlove)
Posted Wednesday, September 29, 2021 9:00 am

BOONVILLE — A bull moose has been sighted in the Boonville area, and residents are urged to practice caution.

The bull moose was seen traveling down Route 46, known as “The Gorge,” on Sunday morning.

“With September nearly over and October fast approaching, moose will be starting their rutting season,” said Kevin Frazier, a representative of the New York State Department of Environmental Conservation. “Bull moose, in particular, will begin wandering the landscape looking for females.”

The DEC urges motorists to be aware when traveling through the Adirondacks — and other locations where moose have been spotted — during these months, as a moose could cross a highway almost anywhere.

“Moose can be difficult to see in low-light conditions,” Frazier said. “Wildlife-vehicle collisions with these large animals can result in personal injuries and can even be fatal.”

The DEC gives the following advice for those traveling where moose are present:

Moose are most active at dawn and dusk;

Slow down during times of reduced visibility; and

Do not approach moose along roadways.

The moose sighting is just the latest in a series of unusual animal spottings in the region over the past two weeks. Bear sightings have been reported in Steuben, Floyd and Whitesboro, where a video of the creature was captured on a trail camera ambling across a lawn in a residential area.

For more information about moose or bears, go online to www.dec.ny.gov.