Higher-hitting temperatures over the past week have resulted in a snow-melt that's impacting activities like snowmobiling and skiing. Some industries are being hit more than others. 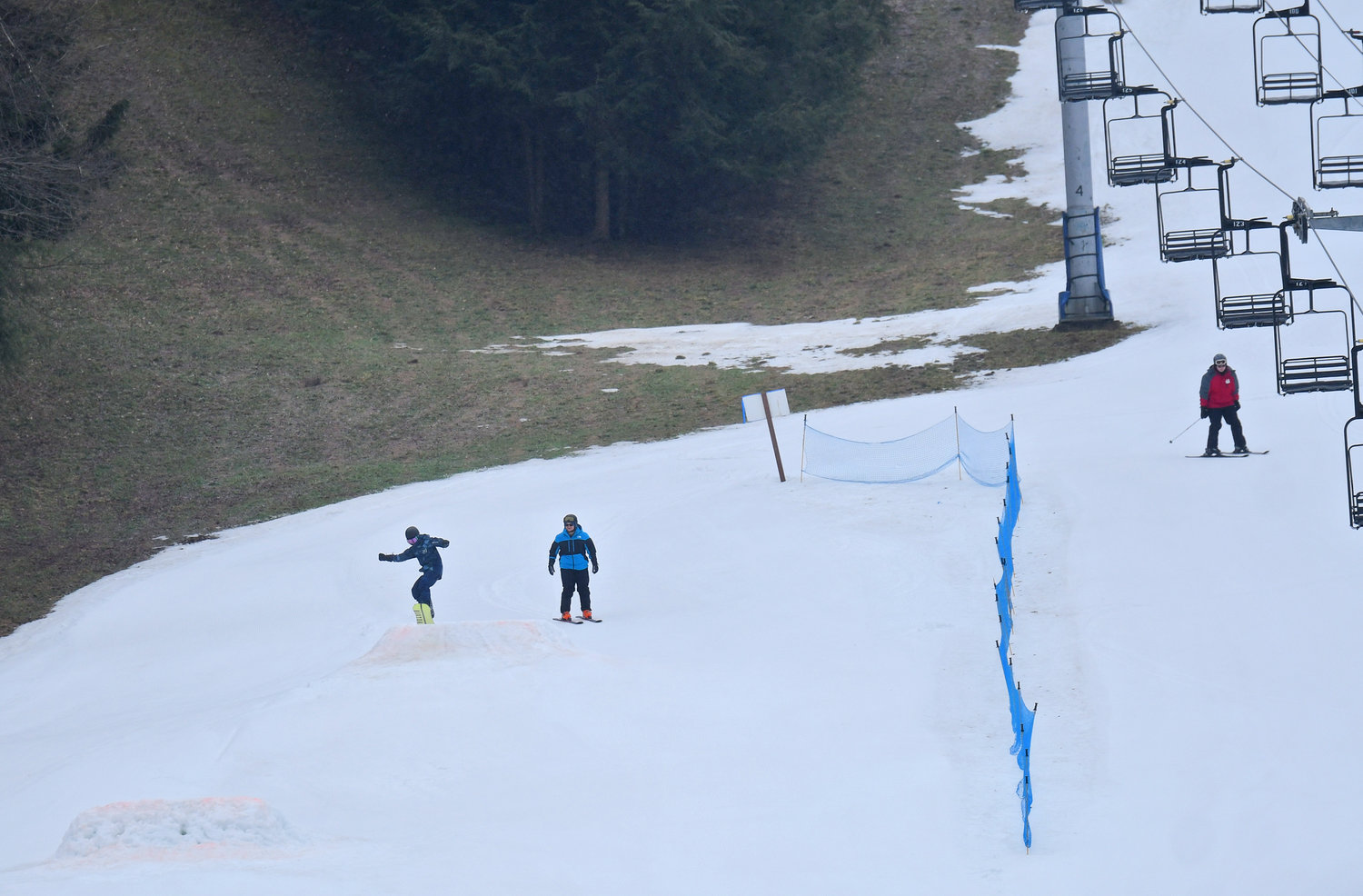 Skiers at Woods Valley enjoy the snow on Friday, January 6, 2023, despite being surrounded by grass on other sides.
(Sentinel photo by John Clifford) 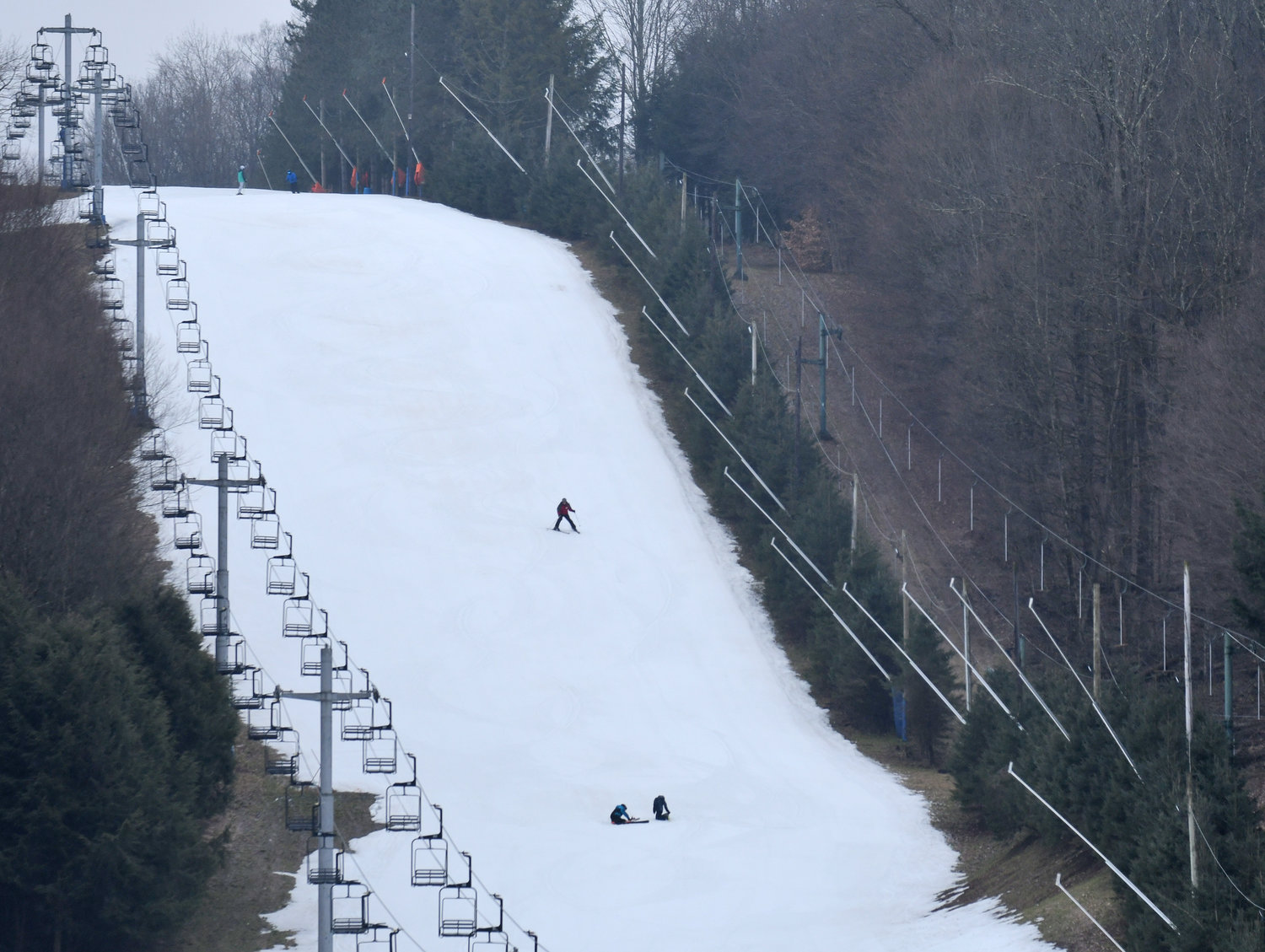 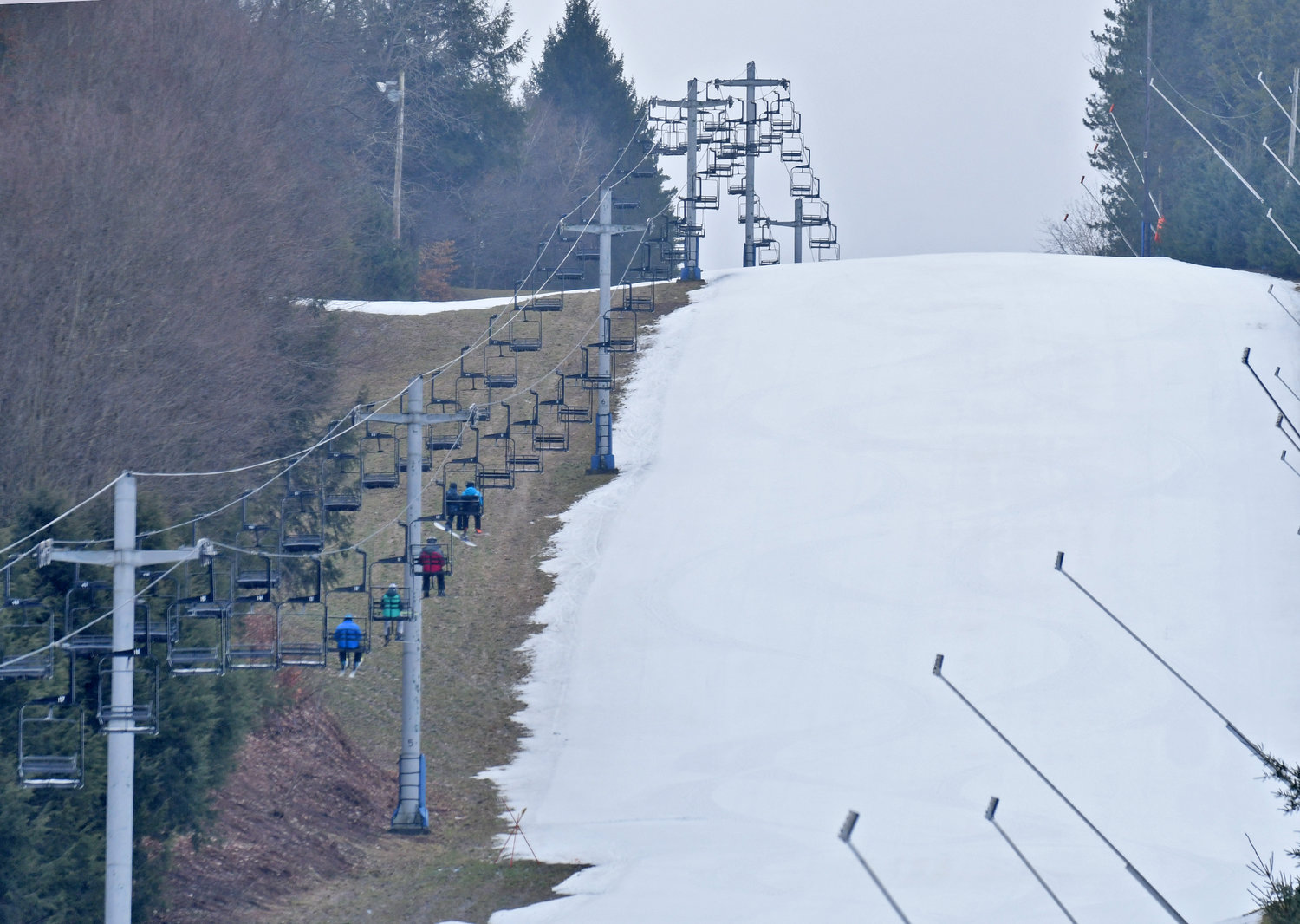 Skiers ride a lift up at Woods Valley next to the "Copy Cat" run on Friday, January 6, 2023. Warmer weather conditions leave the trails surrounded by grass.
(Sentinel photo by John Clifford) 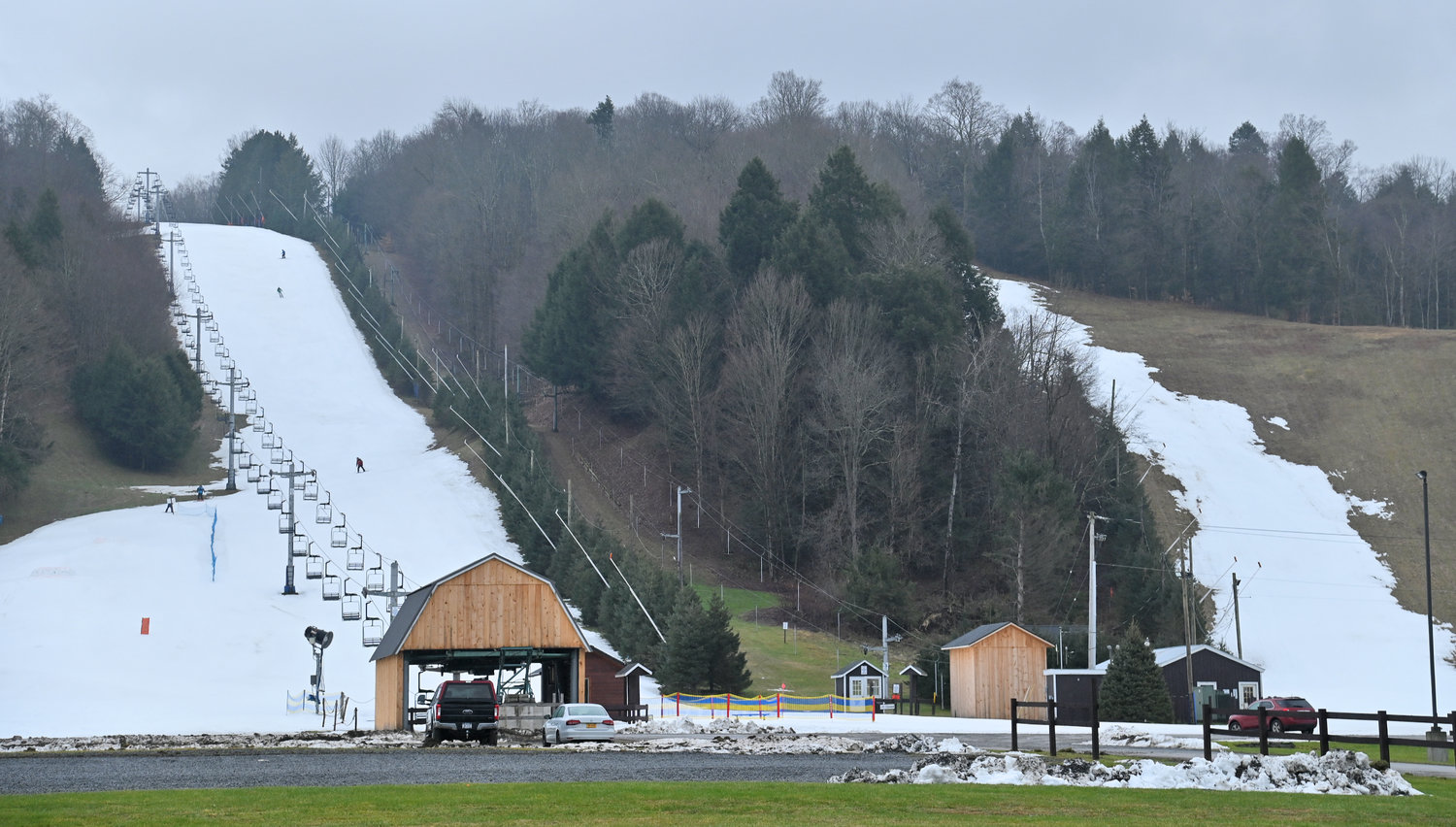 The Boonville Fair track with no ice on the racing surface. Boonville Snow Festival II has plans to have its winter festival, which focuses on snowmobile racing, at the end of January.
(Sentinel photo by John Clifford)

The Boonville Fairground track first turn with the grandstand in the background with no ice on the racing surface Friday, January 6, 2023. Boonville Snow Festival II is currently planning to have snowmobile races here at the end of January.
(Sentinel photo by John Clifford)
Previous Next
Posted Sunday, January 8, 2023 10:30 am
Carly Stone
Staff writer
email / twitter

“Would it just snow already?”

That’s what many winter-recreation enthusiasts in the Mohawk Valley are saying as higher-hitting temperatures over the past week have resulted in a snow-melt that's impacting activities like snowmobiling and skiing. Some industries are being hit more than others.

“The current weather and lack of snow is having a heavy, negative impact on our economy in Old Forge and the Town of Webb,” said Mike Farmer, tourism director for the Town of Webb.

“Ours is a 100% tourism-based economy,” Farmer explained. “Snowmobiling and skiing top the list of snow-related activities supporting our winter tourism industry. We had great snow during the Christmas—New Year’s holiday week, and that is an important bonus we haven’t had in recent years.”

He continued, “Fortunately, McCauley Mountain is still open, with very limited terrain. We’re hoping to get a few nights with temperatures low enough for snowmaking while we wait for much needed snowfall.”

Relying on built-up snow, Woods Valley Ski Area in Westernville is also up and running with a decent skier turnout, according to Tim Woods, owner of Woods Valley, with trails currently encased in white next to grassy off-trail areas.

“We have coverage on most of our acreage and attendance has been strong. We completed about 175 hours of snowmaking between late November and December and with the return of
cold this weekend we will resume snowmaking operations," Woods said on Friday, January 6.

Warmer weather is more of a perception issue when it comes to skiing in the northeast, he said. If there’s no snow in your backyard, there can still be snow up on a hill. Avid skiers know that on warmer days, they can lose a few layers and still hit the slopes.

Woods has invested in snowmaking since he and his wife purchased the business in 2011. They’ve nearly doubled the size of their snowmaking system, which can now make twice the snow in half the time with half the energy, Woods said.

“We’re able to take better advantage of shorter windows of opportunity — basically what this winter’s been all about,” he remarked.

If the trend is for winters to be shorter or more sporadic, then adjusting to this reality is key for business.

Woods Valley has nearly completed a $3 million renovation to its lodge to be active year-round. The facility’s square footage has increased by nearly 120%, and now includes a patio, an area for food and bar service, and expanded seating to host banquets, weddings, and other large events. Other improvements include an elevator, air conditioning, prep kitchen, and interior design. It’s essentially a new building, Woods said.

“It allows us to generate revenue year-round. It allows us to keep key employees year-round, building a strong staff with good continuity. It’s better utilization of the property all the way
around,” Woods said.

The capital project is expected to be fully complete by summer of 2023.

Snowmobiling is a sport more hard hit by the temperature fluctuations.

“This is the third time since November that we have restarted our winter season,” Farmer said of the weather impact. “We have built a reputation for maintaining our snowmobile trails, making the most of whatever snowfall we get. We usually have the best trail conditions in the North Country, but now we’re back at zero with everyone else. This is especially hard on our visitors, who have purchased snowmobiles and trail permits, and many have rented accommodations.”

Steve Sharpless, a representative from the Lost Trails Snowmobile Club, agreed that the conditions have affected the economy in Boonville and surrounding areas, “everything from vacancies at hotels, to the restaurant industry, and fuel stations,” he said.

This also impacts the club directly, as it relies on the activity for its fundraising and social gatherings, like poker runs and chicken BBQs along the trail.

The fate of the Boonville Snow Festival, which brings a large number of snowmobilers together for Adirondack Cup Racing, is hanging in the balance if conditions don’t improve. The half-mile ice track currently has no ice. The event is scheduled for Jan 27 - 29.

Anything can change, though, and snowmobilers are focusing on the positive.

“The up-side is [being able to complete] the trail work to be done due to the wet and heavy snow we had in December. There were a lot of trees and brush that needed and still need to be cleared, so the volunteers are able to get to these tasks without wading through deep snow. But...we'd still rather have the snow!” Sharpless said.

“We know there is nothing we can do about the weather, so we focus on what else can be done. People are still coming to the Old Forge area. Many are hiking the trails they enjoy during the summer. Those and others are finding retail therapy in the unique Adirondack shops and galleries, and they have their favorite restaurants and taverns. If people feel bad about winter conditions, they’d rather be here, where they don’t feel so bad. We want to provide alternatives and serve those people who visit and support us," Farmer said.