Waitress can’t recall when husband, deceased’s sister were at diner 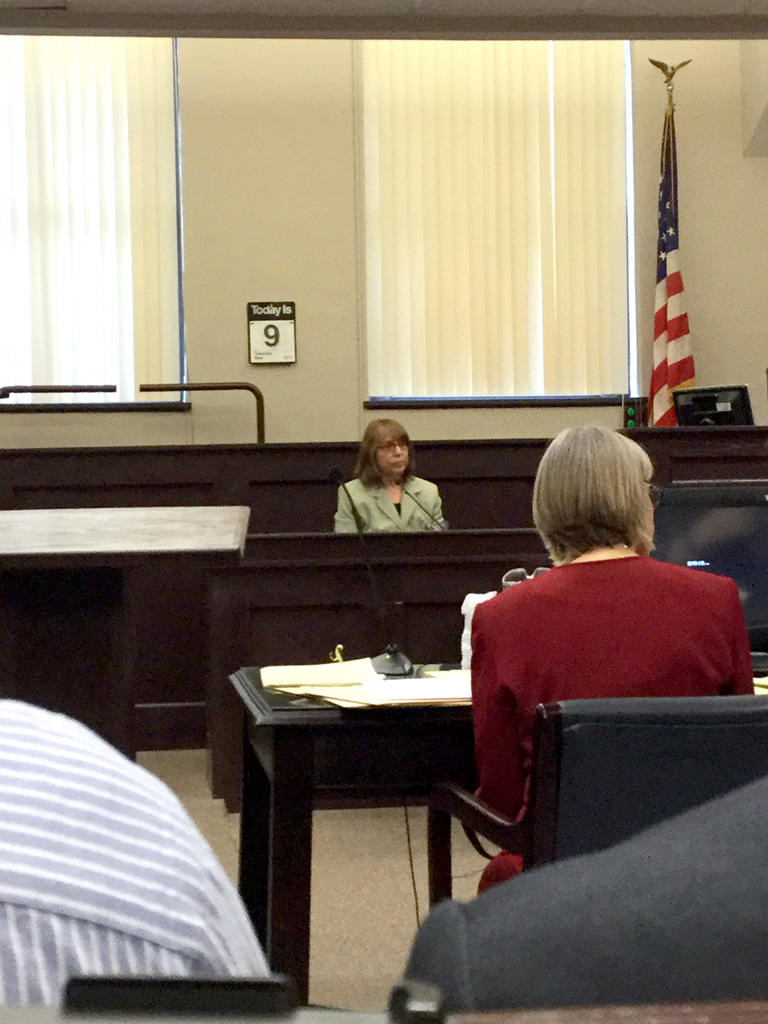 NEW BOYFRIEND — Kathleen Richmond, sister to murder victim Mary L. Yoder, testified on Tuesday about her new relationship with Yoder’s husband. She told the jury that the relationship did not start until two months after Yoder’s death. 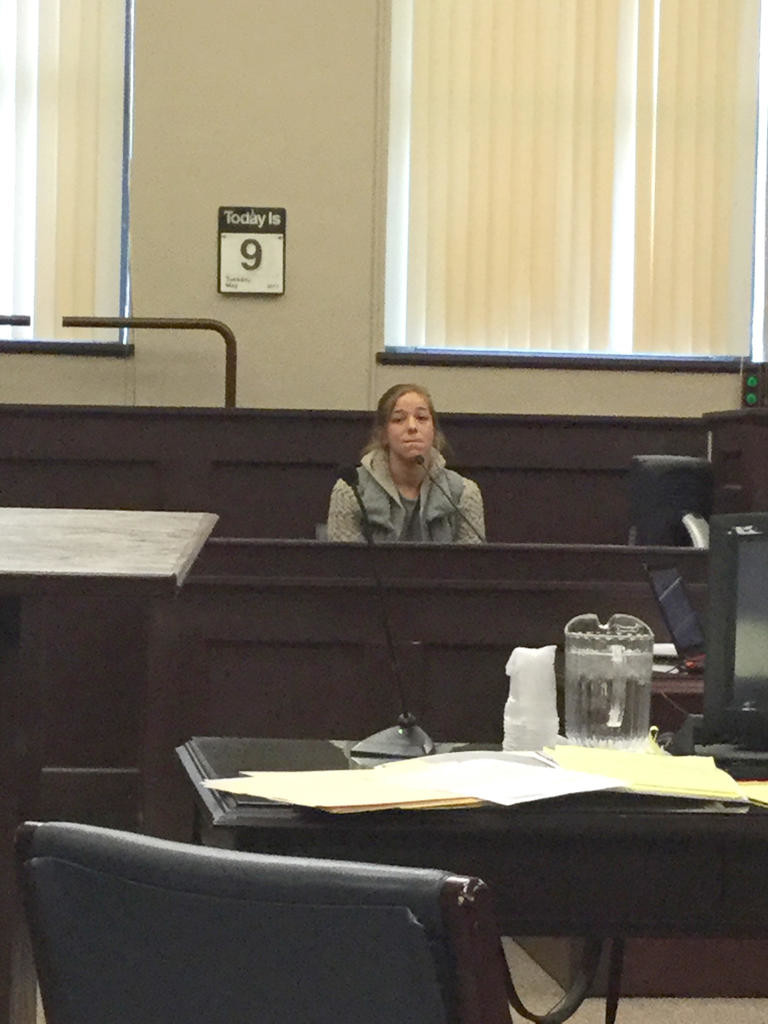 WAITRESS CAN’T REMEMBER — Mallory Clark, a waitress at Dave’s Diner in Cazenovia, testifies Tuesday. The defense claims that Clark told investigators she saw the victim’s husband at the diner with another woman prior to his wife’s death, but on Tuesday, Clark said she could no longer remember when. 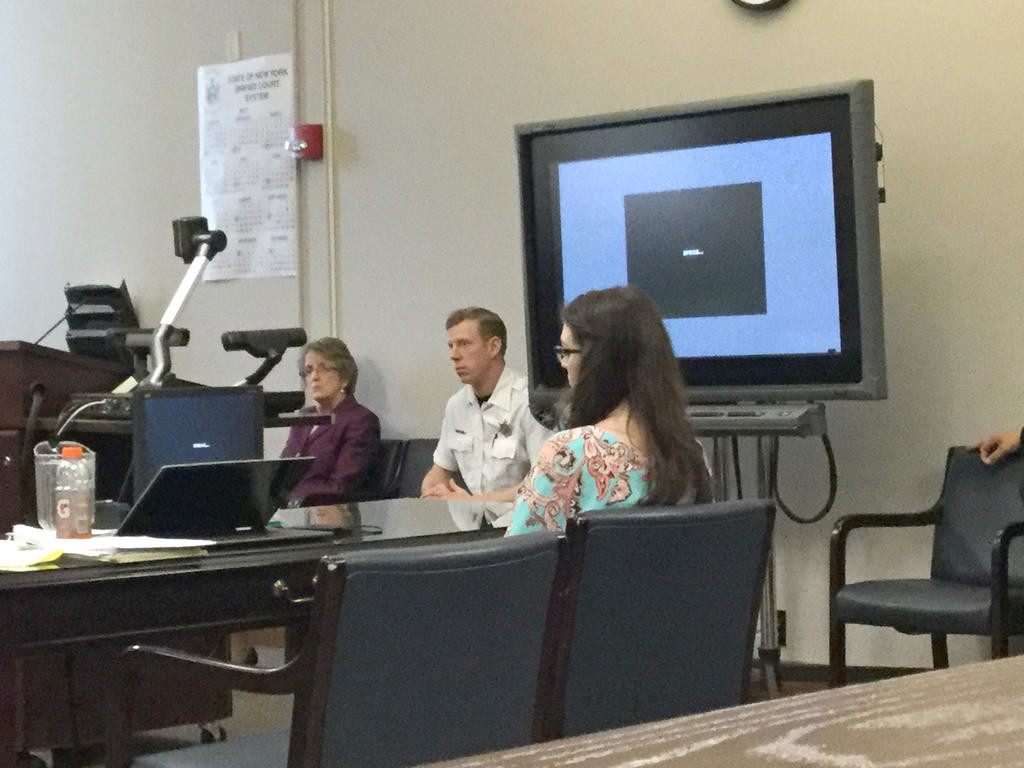 NEARING TRIAL’S END — Accused killer Kaitlyn A. Conley sits at the defense table on Tuesday. Closing statements are expected in the case on Thursday, after which the jury will begin deliberations. (Sentinel photos by Sean I. Mills)
Previous Next
Posted Tuesday, May 9, 2017 4:49 pm
Sean I. Mills
Staff writer
email • twitter

A diner waitress who apparently once told investigators that she saw with her own eyes that William Yoder was having an affair instead changed her story when she took the stand Tuesday afternoon.

Mallory Clark, of Dave’s Diner in Cazenovia, testified that she could no longer remember when she saw Yoder on a date with his dead wife’s older sister, let alone whether or not it occurred prior to Mary Yoder’s death.

“There’s no way that I can tell when I waited on these people,” Clark told the jury.

Clark was one of the first witnesses called by the defense in the murder trial of Kaitlyn A. Conley. The 24-year-old Sauquoit woman is accused of poisoning her boss, Dr. Mary L. Yoder, with the deadly toxin colchicine.

The defense is trying to argue that Yoder’s husband, William, is the real killer, based, in part, on the idea that he had been having an affair with his wife’s older sister, Kathleen Richmond.

Clark testified that she knew both Yoder and Richmond and had waited on them at Dave’s Diner, but when she took the stand Tuesday afternoon, she could no longer recall when exactly she had seen them together. Clark fidgeted on the stand and appeared uncomfortable at times.

Pelli pointed out that Clark had once given investigators a signed statement that she had seen Yoder and Richmond together at the diner in February 2015, but Clark said she didn’t remember putting that date in the statement, and didn’t particularly give that statement much attention to begin with.

“I didn’t want to deal with that,” Clark said about the statement. She testified that she was leaving on vacation soon after giving the statement, so she only gave it a cursory glance.

“I really wish that I didn’t sign it,” she told Pelli and the jury.

Richmond was called to take the stand on Tuesday, where she told the jury that her relationship with William Yoder did not begin until September 2015, about two months after Mary Yoder died. Richmond testified that she had lost a husband in August 2014, and so she and Yoder bonded over their shared grief.

“We were grieving together and we gravitated towards each other,” Richmond testified. “And that’s when the more intimate relationship began.”

Richmond testified that she was only ever “just friends” with her brother-in-law Yoder prior to Mary Yoder’s death and that there was no affair.

The defense also called the last of the three Yoder children to take the stand, Tamaryn Yoder.

According to Tamaryn Yoder, she and her father had a conversation several months after her mother died where her father said he had enough money to retire. William Yoder had received a sizable inheritance from his own father’s passing, according to prior testimony.

“He did not want us to worry about him financially. He said he did have an inheritance and he believed if he did have to retire he would be able to survive,” Tamaryn testified on Tuesday.

“He mentioned that it might not have been enough for two to live indefinitely off of it,” Tamaryn stated.

David King, the nephew of Mary Yoder, took the stand Wednesday morning to testify about the time he lived with his cousin, Adam Yoder. They lived together in Utica and Frankfort after Mary Yoder died, until Adam abruptly moved out and left his property behind in December 2015.

King testified that Adam Yoder left behind several supplement pills, as well as some documents that contained computer IP addresses and remote desktop access applications. King admitted that he did not know where or when the documents came from, but he recognized Adam Yoder's handwriting.

Another defense witness, Janine King, one of Mary Yoder's sisters, testified that she did not believe law enforcement's theory that Kaitlyn Conley would have acted alone.

"They really didn't want to hear anything that I might have offered at that time," King told the jury.

Closing statements are scheduled for Thursday, which is when the jury will likely begin deliberations.

Conley is charged with one count each of second-degree murder and second-degree forgery, as well as two counts each of first-degree falsifying business records and petty larceny. She faces a maximum of 25 years to life in prison if convicted.