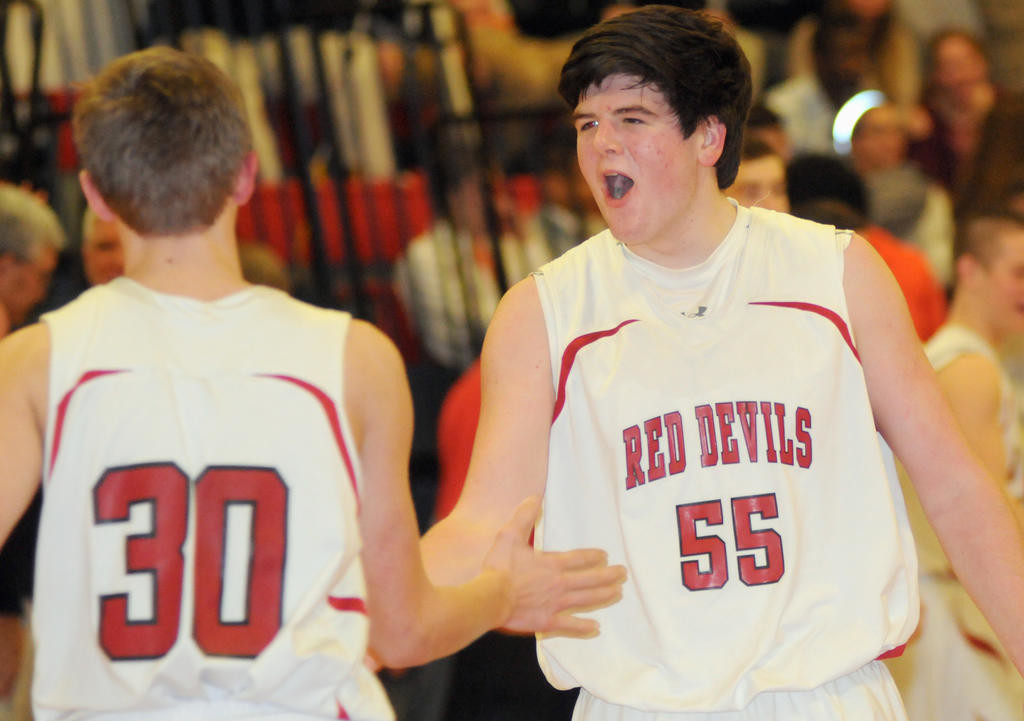 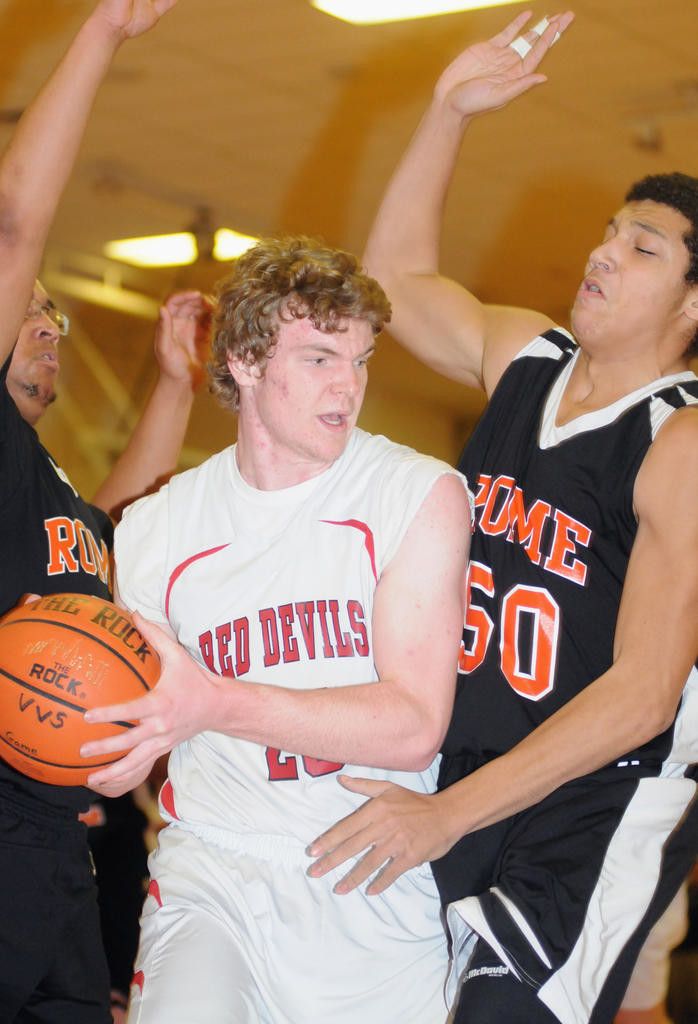 LOOKING FOR HELP — Vernon-Verona-Sherrill’s Davey Moffett looks to get out of trouble while being double teamed by Rome Free Academy’s Lindell Reed, left, and Gavin Mosher during a non-league contest in Verona on Tuesday night. VVS won 64-61 in overtime. (Sentinel photo by Makenzi Enos) 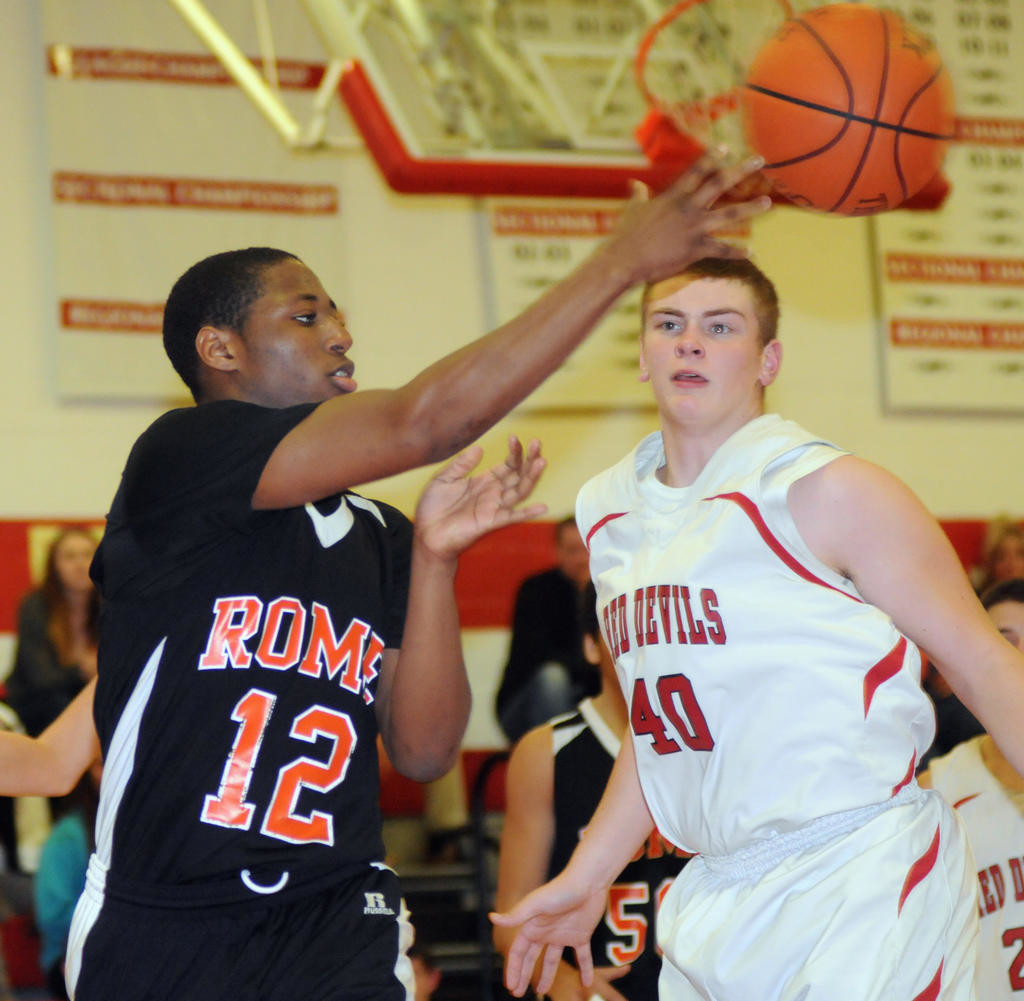 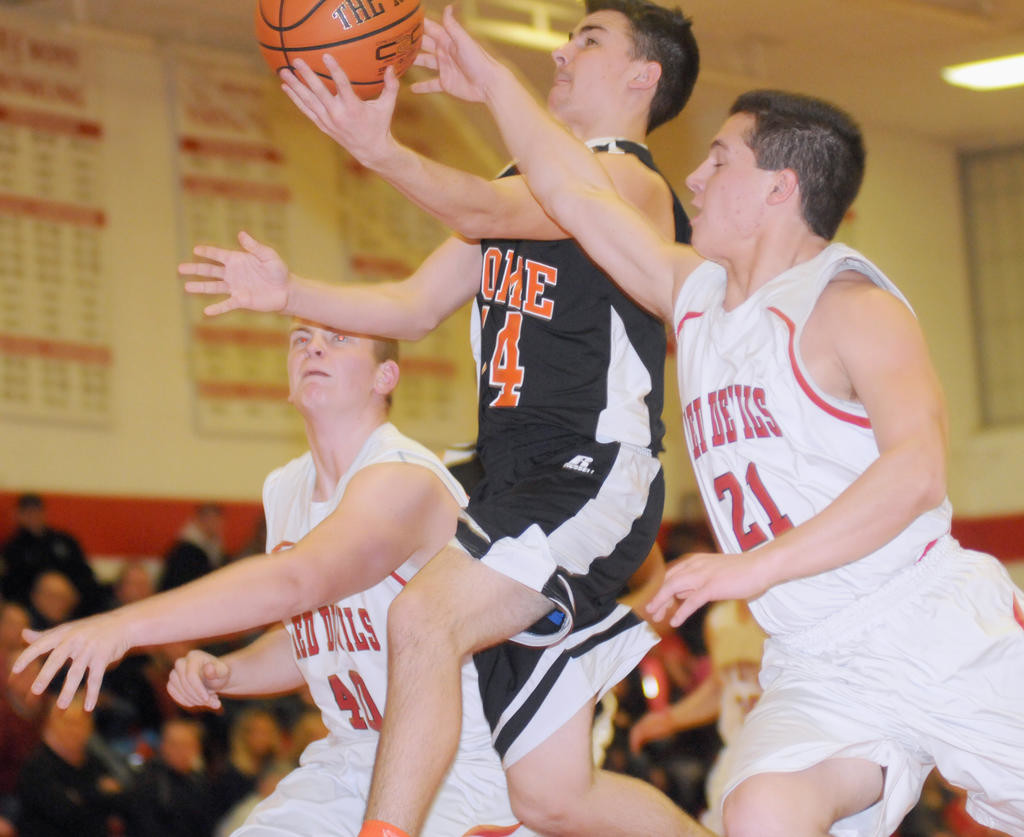 That has been the story of the Rome Free Academy boys basketball team throughout the season. Tuesday night’s contest was no different, as the Black Knights fell to Vernon-Verona-Sherrill 64-61 in overtime.

The 5-10 Black Knights got off to a quick start in the non-league game, literally right off the opening tip. Gavin Mosher won the jump ball to TJ Behlin, who found a cutting Ethan Powell for a layup, good for the game’s first basket while the game wasn’t even 15 seconds old.

The next three minutes would belong to the Black Knights as they would stretch their lead to 10-1, six points on back to back possessions thanks to a pair of three-pointers by Powell that found the bottom of the net. Powell had eight of his 10 points all within the first four minutes of the game.

“We’ve done that the past four games,” VVS coach Andy Cossette said of his 13-4 team after the game. “We’ve found ourselves digging out of a hole to start the game. That’s why I called that quick timeout so we could get into our shorts a little bit.”

“My teammates just kept feeding me the ball, so I wanted to reward them with assists,” Moffett commented on his big first quarter. “I just play my game, and my team does a great job.”

Moffett picked up in the second quarter right where he left off in the first; getting inside on the Black Knights, and getting a layup to go. RFA then had a little 7-0 run all coming off the hands of Isaiah Harris, who had a team-high 17 points for the Black Knights. As soon as Rome had came back to take a 23-19 lead, senior guard Ryan Palmer buried his first of five three-pointers to bring the Red Devils within one. Two possessions later, Palmer connected again from deep, getting six of his 17 points in the span of a minute.

As more back and forth action ensued throughout the remainder of the half, Noah Rodriguez nailed a three to give the Black Knights the 30-26 advantage going into the break.

After a sluggish start for both teams in the third, RFA started getting out on the break by making two steals for layups to push their lead to four. After a Moffett layup, and Lindell Reed splitting a pair from the free throw line, Palmer hit a three-pointer to tie the game at 35 with 2:45 to go in the third quarter.

Trailing by two going into the final period of regulation, the Black Knights got hot from the floor as they went on a 7-0 run to begin the fourth. VVS however would not go away. The Red Devils came back with a three-pointer from Palmer with three minutes to go, and then both teams would make it a free throw shooting contest.

Harris was sent to the line with 45.9 seconds to go in regulation, and he made his first free throw, giving the Black Knights a 57-54 lead.

For his fifth make from behind the arc, Palmer buried the game tying three with 30 seconds left, that would ultimately send the contest into overtime tied at 57.

“I thought that Ryan (Palmer) making his three to force overtime was the turning point of the game,” Cossette said. “He’s my senior leader, and I expect that from him.”

Palmer added, “I was shooting the ball well all game, so when I got the ball, I took the shot.”

Once overtime began, Dewey Roden would be the one who did all the scoring for the Red Devils from the foul line. Roden went 7-for-8 from the free throw line in the overtime period. RFA only scored four points in the extra frame.

“Very disappointing,” RFA head coach Nick Medicis said after the game. “We missed free throws and our layups. These are mistakes that a team at this stage cannot make.”

The Black Knights shot 6-for-18 from charity stripe.

“We played hard,” senior guard Isaiah Harris added. “We’re a very young team, and I trust every single one of them. It’s very, very frustrating, but tomorrow’s a new day, and we’ll be looking for the win.”

Both squads will be back in action tonight. RFA will play host to West Genesee in a game that was supposed to be played last week, but was postponed. Tip-off is scheduled for 7 p.m. at Strough Middle School.

VVS will take to the road to square off against Little Falls. The Red Devils tip off at 7:30.