Voters have say in races for court posts, local offices 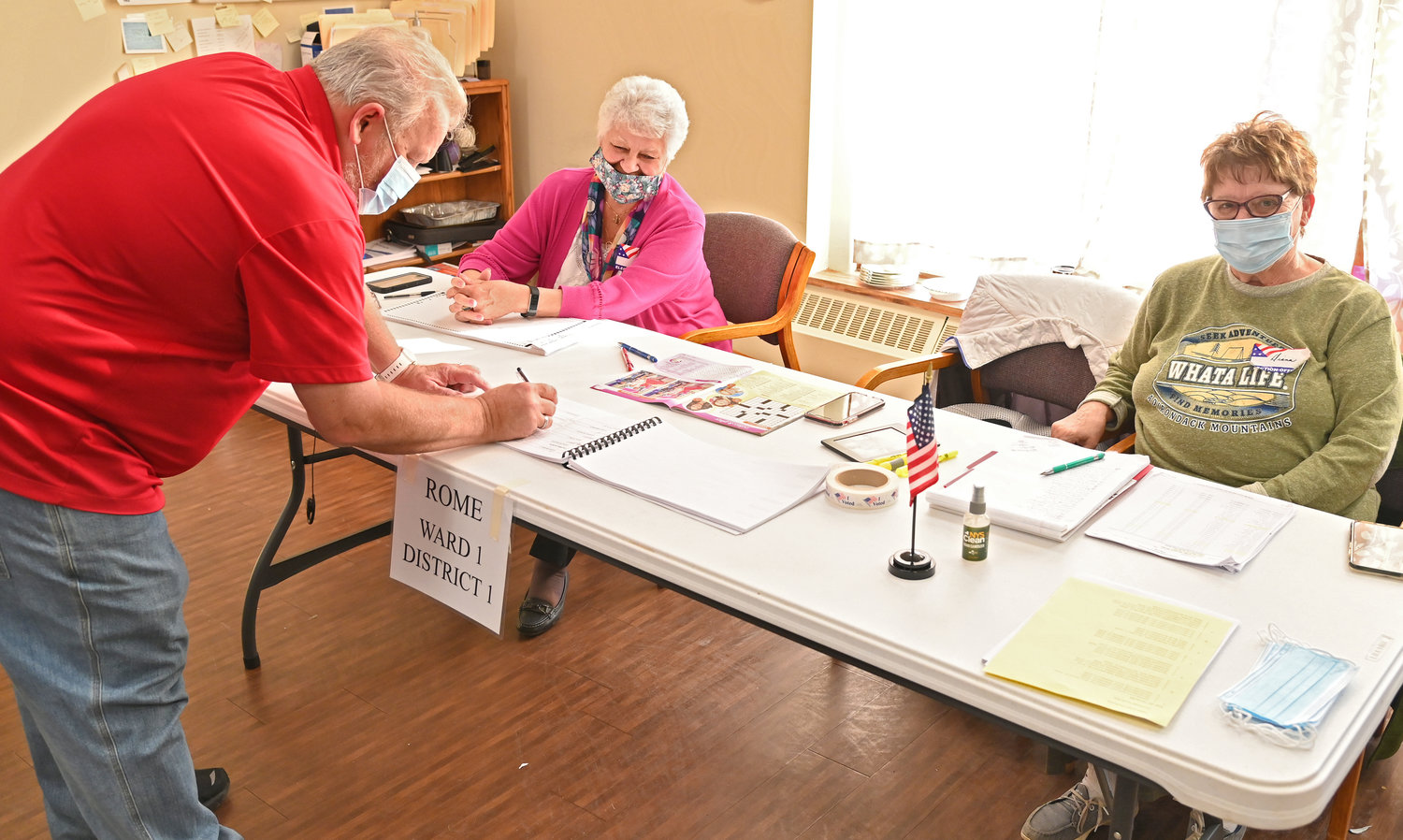 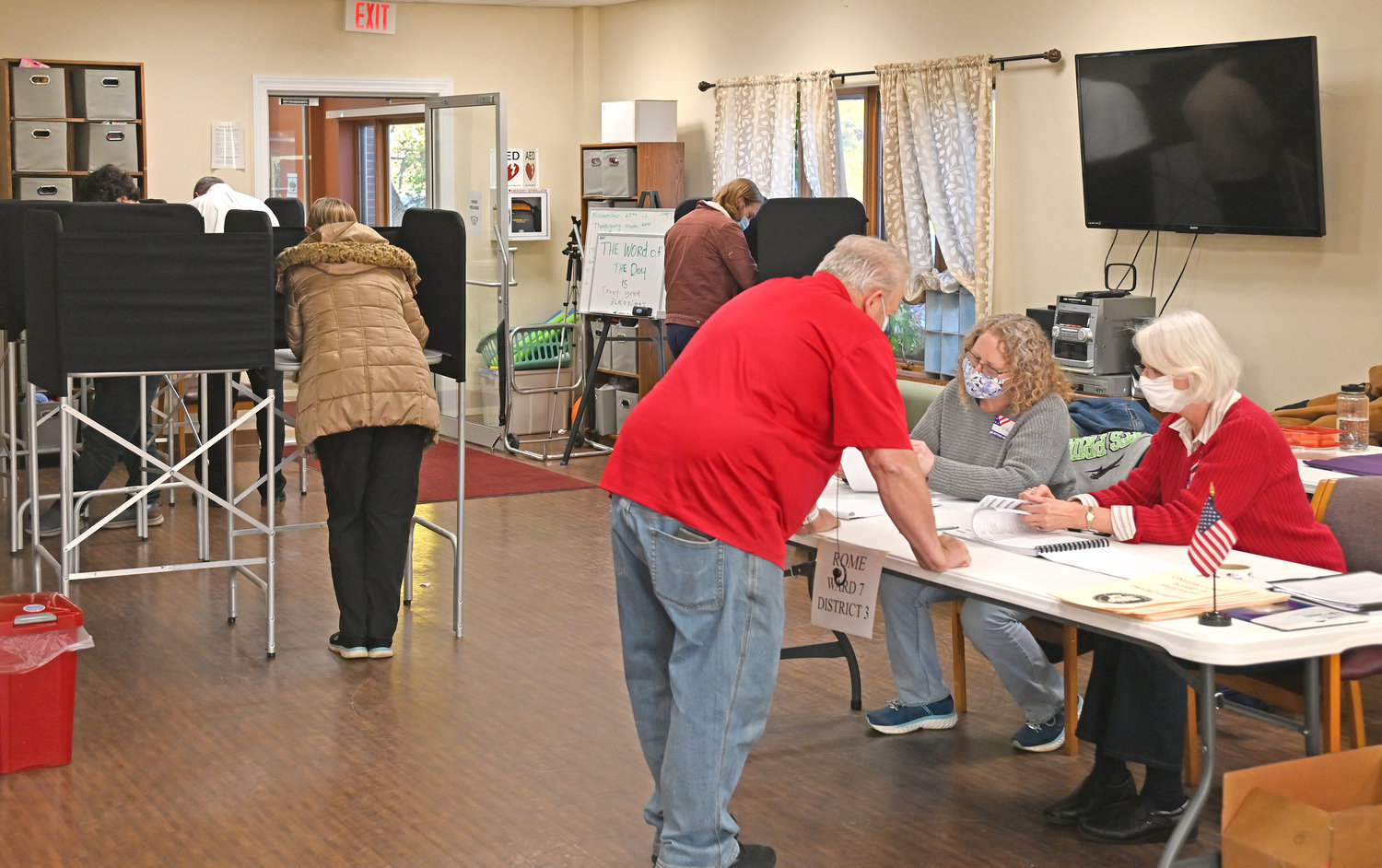 BUSTLING — The voting was brisk at the Copper City Community Connection, 305 E. Locust St., with a steady stream of voters casting their ballots on local races as well as several statewide propositions which were also on the ballot.
(Sentinel photo by John Clifford) 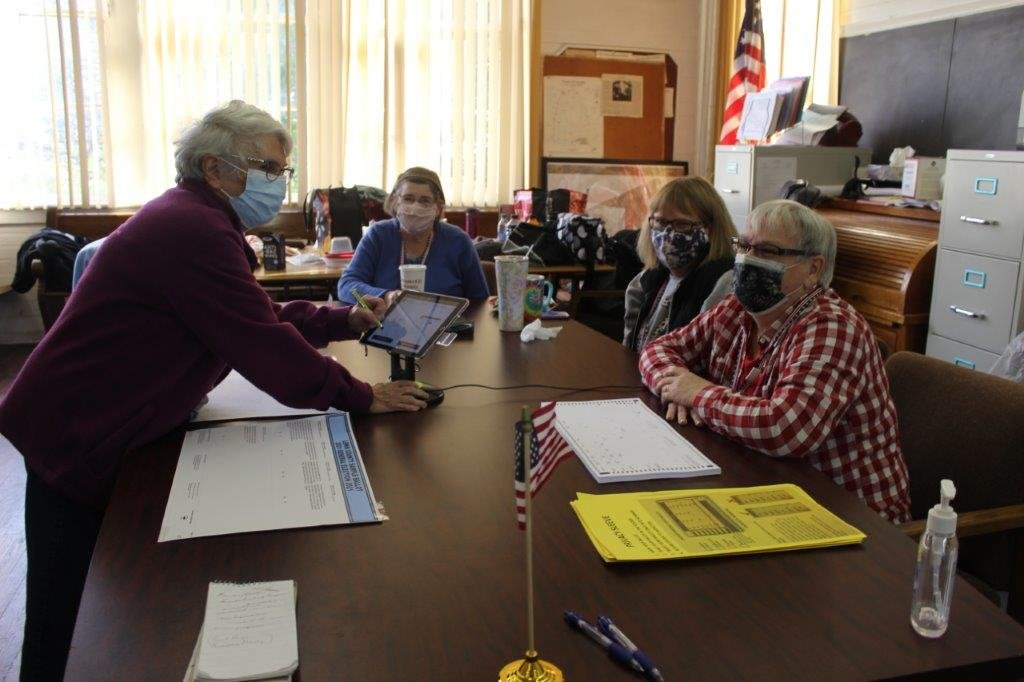 CASTING HER BALLOT — Louise Wilson signs in to register so she can cast her vote as inspectors Shelly Krug, Lorna Weber, and Yvonne Albertson stand at the ready to help in Leyden on Tuesday.
(Photo courtesy of Elizabeth Haig)
Previous Next
Posted Tuesday, November 2, 2021 11:13 pm
Jolene Cleaver
Staff writer
email

This election season, voters were able to select their choices in a number of state and local races.

Among them were the contests for State Supreme Court Justice in the Fifth Judicial District and the Oneida County Family Court Judge position. Running for the seat is Anthony Brindisi, a Democrat, and Danielle Fogel, a Republican.

As of 10:35 p.m. Tuesday night, unofficial results from the New York State Board of Elections showed 448 of 894 poll sites reporting and Fogel had secured 57,195 votes with Brindisi getting 47,633.

As the votes were tallied, Fogel was observing and noted that there was still a lot of work to do, before a winner could be called.

“I am very encouraged. We ran a really strong campaign, and I think the voters got it,” she said.

Leading up to the election, the candidates weighed in on what they hoped to achieve as a justice as well as why they chose to run.

Fogel said in a portion of a previous statement to an election feature by the Daily Sentinel, “...I am running because becoming a judge is something that I have worked for my entire career. I am excited to transition to a judicial role where I can use the skills that I have gained as a trial lawyer during my nearly two decades of practicing law to serve the community and help people resolve their legal
disputes in a fair and just manner.”

In the same feature, Brindisi responded to the Daily Sentinel, “I have been honored to represent our area in the state Assembly and the House of Representatives. Now, I’m working hard to take another step and serve this community as a State Supreme Court Judge ... When voting for a judge, the right mix of experience is what counts. I’m running to use my experience as a lawyer and lawmaker to continue my service to our community…”

As of 10:35 p.m. Tuesday night, unofficial vote totals from the Oneida County Board of Elections showed Flemma with 24,813 votes and Stanislaus with 12,711.

In a recent question and answer feature posed by the Daily Sentinel, when asked why he was running for the seat, Flemma wrote, “For the past six years, I’ve had the honor of serving as Court Attorney to Family Court Judge Julia Brouillette. Working in Oneida County Family Court each and every day, I’ve seen firsthand the positive difference that can be made in the lives of children and families…”

To the same question, his opponent, Stanislaus, wrote, “...The reason is that I am a Court Attorney Referee appointed by the Chief Administrative Judge to hear and make final binding judicial decisions in the areas of domestic violence, custody, parenting time and grandparent visitation. In this capacity I have presided over thousands of cases and have an impeccable Appellate record…”

Democrat Eric Adams has been elected New York City mayor, defeating Republican Curtis Sliwa on Tuesday in a contest far easier than his next task: steering a damaged city through its recovery from the coronavirus pandemic.

Adams, a former New York City police captain, will become the second Black mayor of the nation’s most populous city. David Dinkins, who served from 1990 to 1993, was the first.

“Tonight, New York has chosen one of you -- one of our own. I am you. I am you,” Adams told a jubilant crowd at his victory party. “After years of praying and hoping and struggling and working, we are headed to City Hall.”

Adams’ victory seemed all but assured after he emerged as the winner from a crowded Democratic primary this summer in a city where Democrats outnumber Republicans 7 to 1.

“Tonight is not just a victory over adversity, it is a vindication of faith. It is the proof that the people of this city will love you if you love them,” Adams said.

Adams finished his victory speech and then introduced Gov. Kathy Hochul, who pledged “a new day dawning and a whole new era of cooperation where the only thing the city of New York and the state of New York are fighting about is fighting to make your lives better.”

“We will fight for you, not fight each other anymore,” she said, a reference to the contentious relationship between city and state in previous administrations.