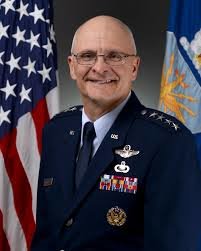 The visit was reviewed in an announcement Tuesday by the Air Force Research Laboratory (AFRL), which is part of AFMC; both have headquarters at Wright-Patterson Air Force Base in Ohio. Rome Lab, at Griffiss park, is formally known as the AFRL Information Directorate.

The announcement humorously said Bunch “knew there were risks in coming to Rome in the winter and made a valiant effort to ‘not appear wimpy’ in the eyes of Mayor Jacqueline M. Izzo, who challenged the general to a visit to Rome during the coldest time of year in upstate New York.” His plane was unable to land in Rome and was rerouted to Hanscom Air Force Base in Massachusetts.

During the visit, Bunch received updates on programs, facilities, and milestones since his last visit to Rome Lab in 2020. Bunch said he was impressed and reiterated to the lab team to “keep doing the great things you’re doing,” according to the announcement.

Rome Lab is undergoing construction of a perimeter security project, ongoing telework improvements, and has efforts within a Diversity and Inclusion program, the announcement said. Bunch commented, “the fact that RI [Information Directorate] is willing to have the difficult conversations regarding diversity and inclusion, thank you for that.”

Bunch spent a portion of his virtual visit with the directorate’s Junior Force, which includes employees within the lab with less than 10 years of service. It was “rewarding for all parties sharing questions, comments, concerns and lessons,” the announcement said.

“This visit is the epitome of what RI (Information Directorate) can provide to the Air Force and nation,” Lawrence observed. “Senior leaders had to divert and we still got the mission done by turning on a dime. So proud of the team for what they were able to do to further the mission.”

Lawrence also met Congresswoman Claudia Tenney, R-22, New Hartford, for the first time and Joe Nehme of U.S. Sen. Charles Schumer’s office, updating them on Rome Lab’s mission and accomplishments, the announcement said. They were among several area officials who had gathered Monday in anticipation of Bunch’s landing before the shift to a virtual visit. The group met with Tenney and Nehme, said Wright-Patterson spokesman Bryan Ripple.

Rome Lab’s lab employment for fiscal 2020 has been reported as 838 civilian and military employees, plus 372 on-site contractors under Air Force contracts. The lab “leads the Air Force and nation in Command, Control, Communications, Computers, and Intelligence (C4I) and Cyber science, technology, research, and development,” according to the AFRL.