Village Planning Board members voted Tuesday to apply for a $2 million Restore NY grant to help demolish and restore portions of the historic Waterbury Felt Mill. 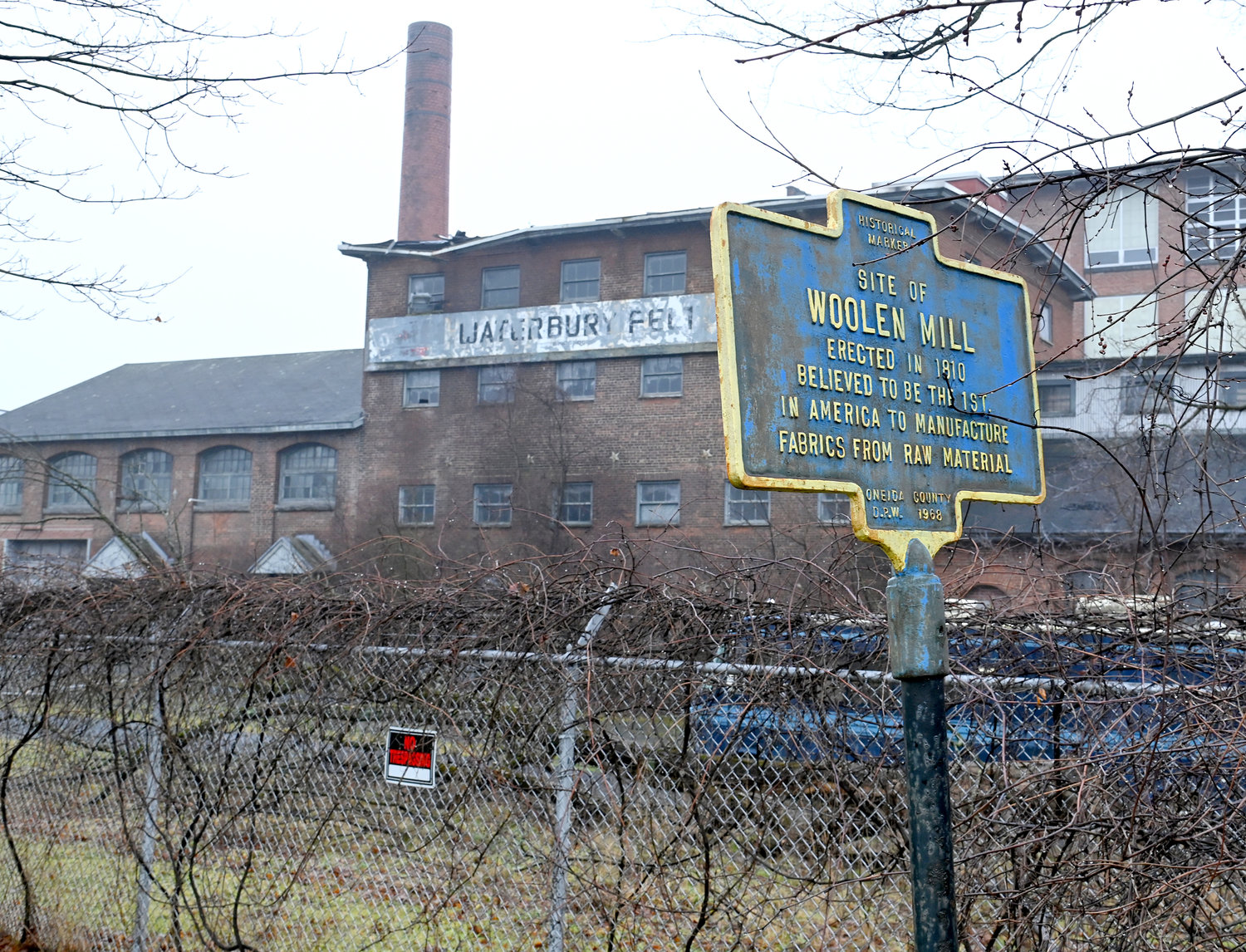 A state historic marker denotes the rich past of the former Waterbury Felt Mill in Oriskany Wednesday, Jan. 4. The marker, visible from Route 69/Erie Boulevard, proclaims “the site of the Woolen Mill, erected in 1810 (and) believed to be the first in America to manufacture fabrics from raw material.”
(Sentinel photo by John Clifford)

Plans are moving forward for the former Waterbury Felt Mill in Oriskany to have portions demolished and other sections restored for future use at the site, located at the corner of Route 69 and River Street.
(Sentinel photo by John Clifford) 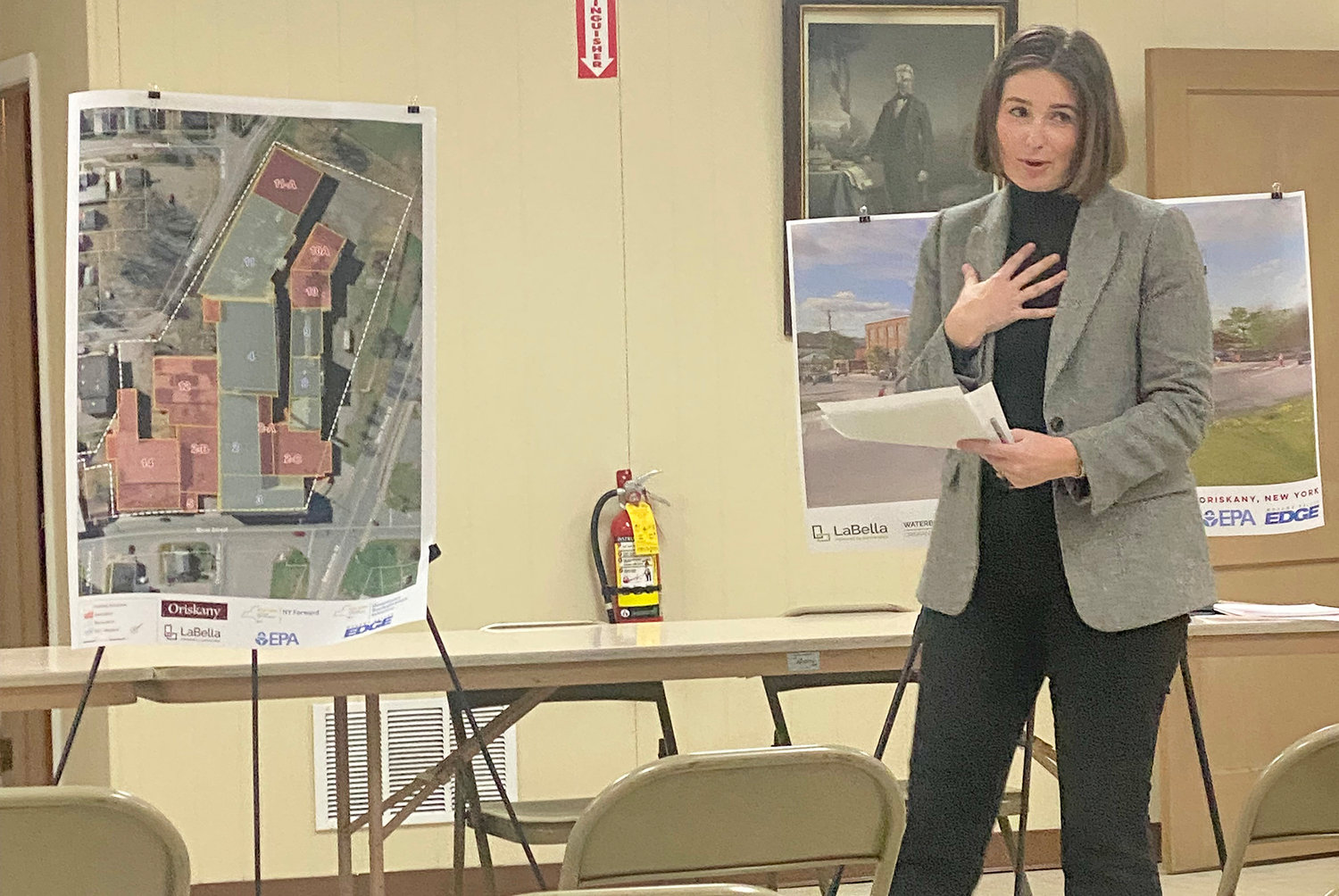 A representative of LaBella Associates, of Rochester, discusses the possibilities for the future of the old Waterbury Felt Mill in Oriskany during a meeting of the village Planning Board on Tuesday.
(Sentinel photo by Eileen Pierson)

The former Waterbury Felt Mill in Oriskany is shown from Route 69 in the village on Wednesday, Jan. 4.
(Sentinel photo by John Clifford)

Collapsed portion of the Mill in Oriskany on River St. that still hasn't been taken down Wednesday, January 4, 2023.
(Sentinel photo by John Clifford)
Previous Next
Posted Saturday, January 14, 2023 6:40 am
Nicole A. Hawley
Staff writer
email / twitter

Restore NY is a grant program offered by Empire State Development, which provides up to $2 million per project to transform abandoned and neglected properties into modern 21st century buildings. Eligible projects include work to demolish, deconstruct, rehabilitate and reconstruct vacant, abandoned, condemned or surplus properties.

If received, the grant monies would be used toward both demolition and restoration work being planned for the site. Total project cost is estimated at $5 million, village officials said.

According to a presentation given by LaBella Associates, of Rochester, Oriskany has no liability for the program, which stays with the developer — Adam Kernan of Swift Rescue, LLC.

Village officials, Mohawk Valley EDGE and LaBella Associates held informational and public feedback sessions on the remediation process for the mill property back in September during the Wednesday Oriskany Farmers Market at Trinkaus Park.

At the time, EDGE announced it had received $300,000 from the Environmental Protection Agency (EPA) to develop remediation plans for brownfield sites across Oneida County, and the former felt mill site had been selected for use of the funding.

Located at 107 River St., the former Waterbury Felt Mill site has a two-century history in the village. The first textile mill on the site, Oriskany Manufacturing Company, was incorporated in 1811.

Village Clerk Alexis Albright said plans are to clean out portions of the site and see which parts of the mill can be restored for viable use.

“There are a couple newer additions put on later in the 20th century that are more sturdy than the original building,” said Albright. “They have surveyed the site and decided that the healthiest structures they’d try to rehabilitate. The portion that collapsed on River Street, by pub (Stockdale’s), is marked for demolition. Right now they’re finishing the environmental survey on the site, and making sure everything is good to go on that.”

LaBella Associates has provided renderings of what the rehabilitated mill would look like, including portions with new windows and landscaping.

Plans are “to preserve as much of the building as we can,” Albright said.

As part of the grant application, according to LaBella, the project will be required to be architecturally consistent with nearby properties and be consistent with the village’s local revitalization or urban development plan. The State Historic Preservation Office (SHPO) must also sign off on all projects to ensure that state grant funds do not go toward any projects that do not maintain the historic character of the buildings.

“As an established business in Oriskany, we’re all for progress,” Moulton said.