It is a “nightmare.” That is how the family of murder victim Bianca Devins has described life since the brutal killing of the Utica teenager. Not just from the loss of their loved one, but also … 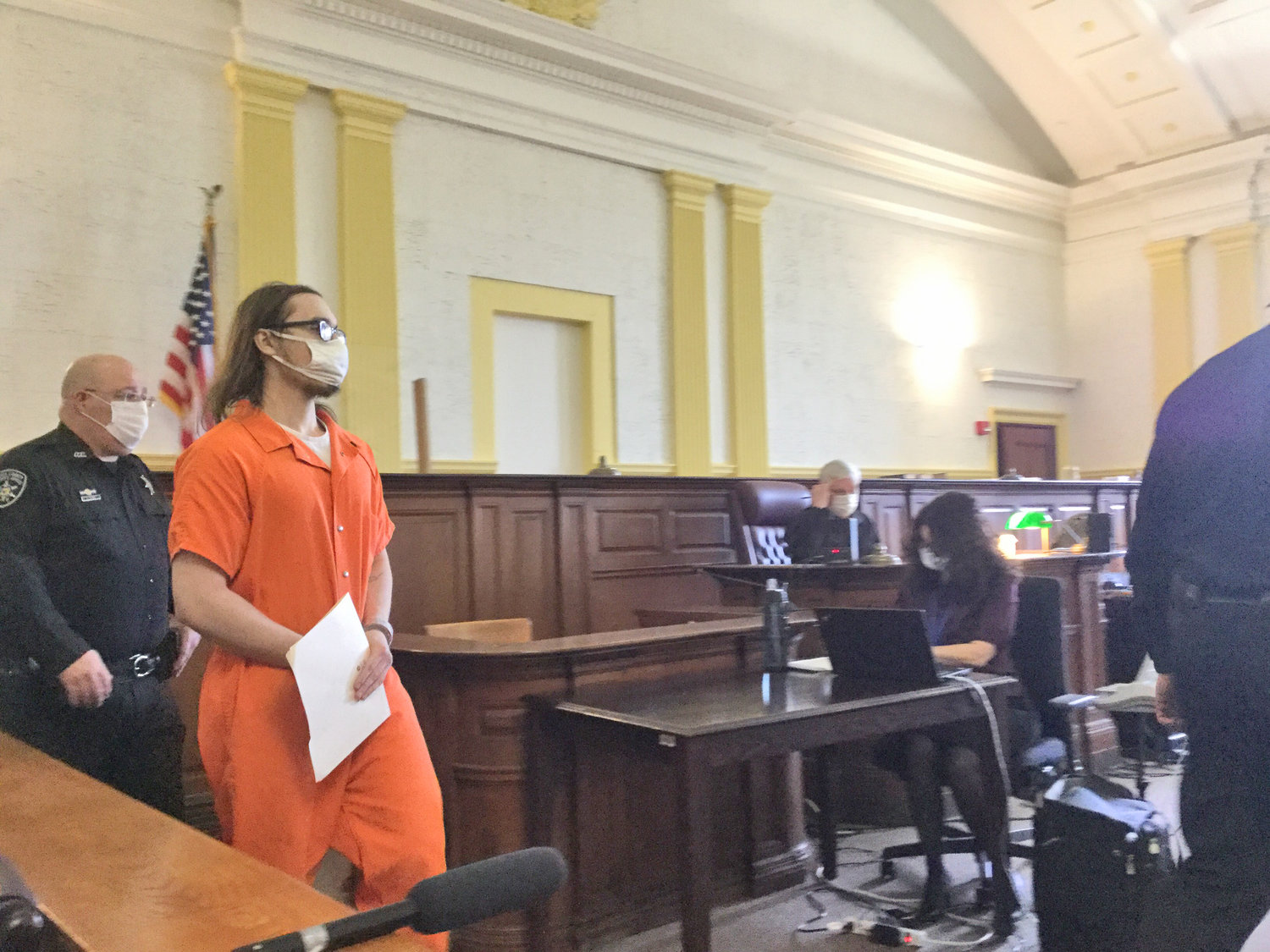 CLARK ENTERS THE COURT — Convicted killer Brandon A. Clark arrived in court Tuesday morning, nearly one year after his original sentencing date. That date was delayed due to the pandemic. Clark expressed disgust at his actions for killing 17-year-old Bianca Devins in Utica in July 2019, and uploading pictures of her body onto the internet.
(Sentinel photo by Sean I. Mills) 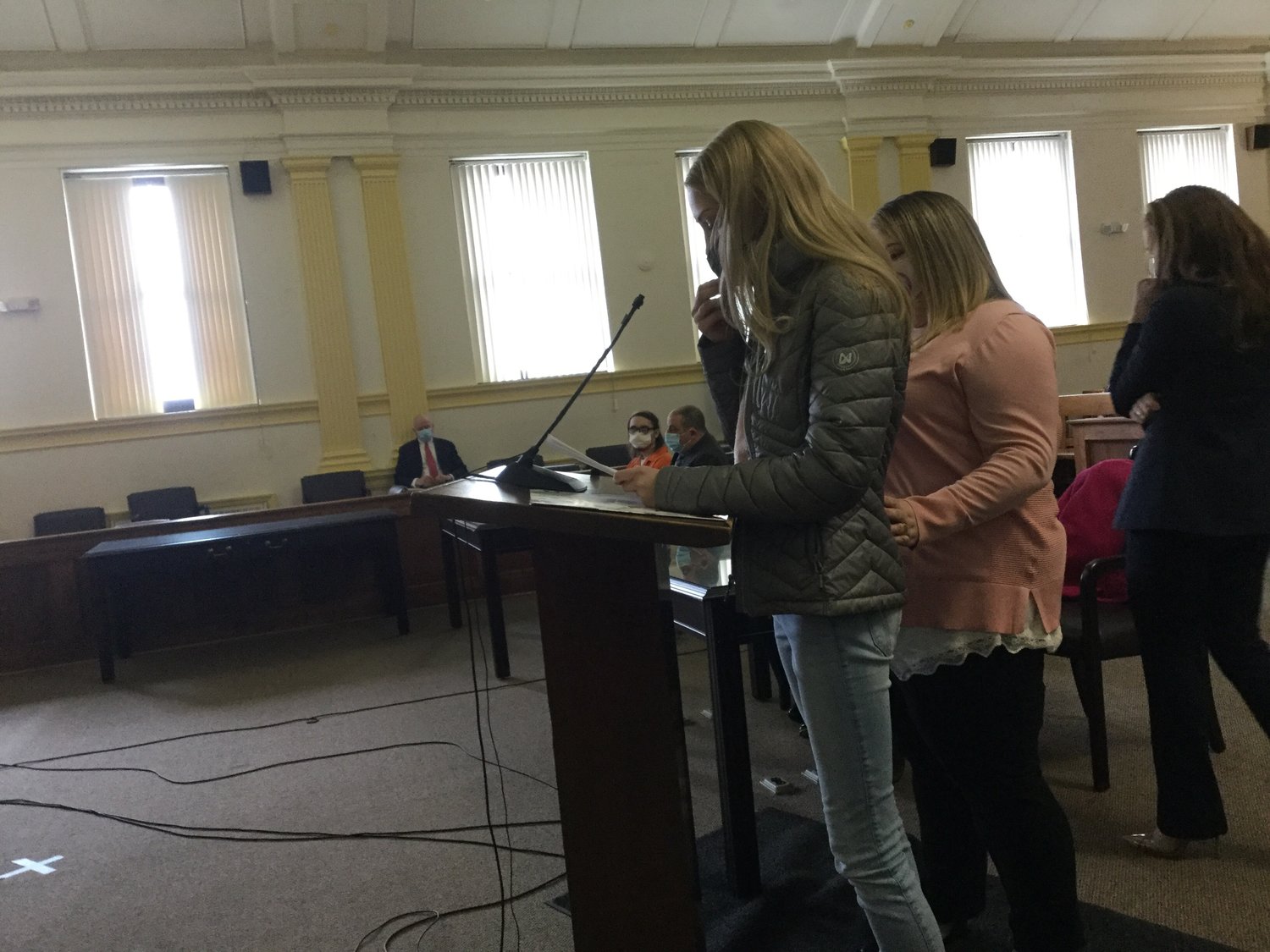 A SISTER WEEPS — Oliver Devins, younger sister to the slain Bianca, cried in court as she read her statement to the judge and the gathered friends and family. Olivia shared happy memories of her sister, but also spoke of the terror of having pictures of sister’s dead body sent to her by anonymous internet users still to this day.
(Sentinel photo by Sean I. Mills) 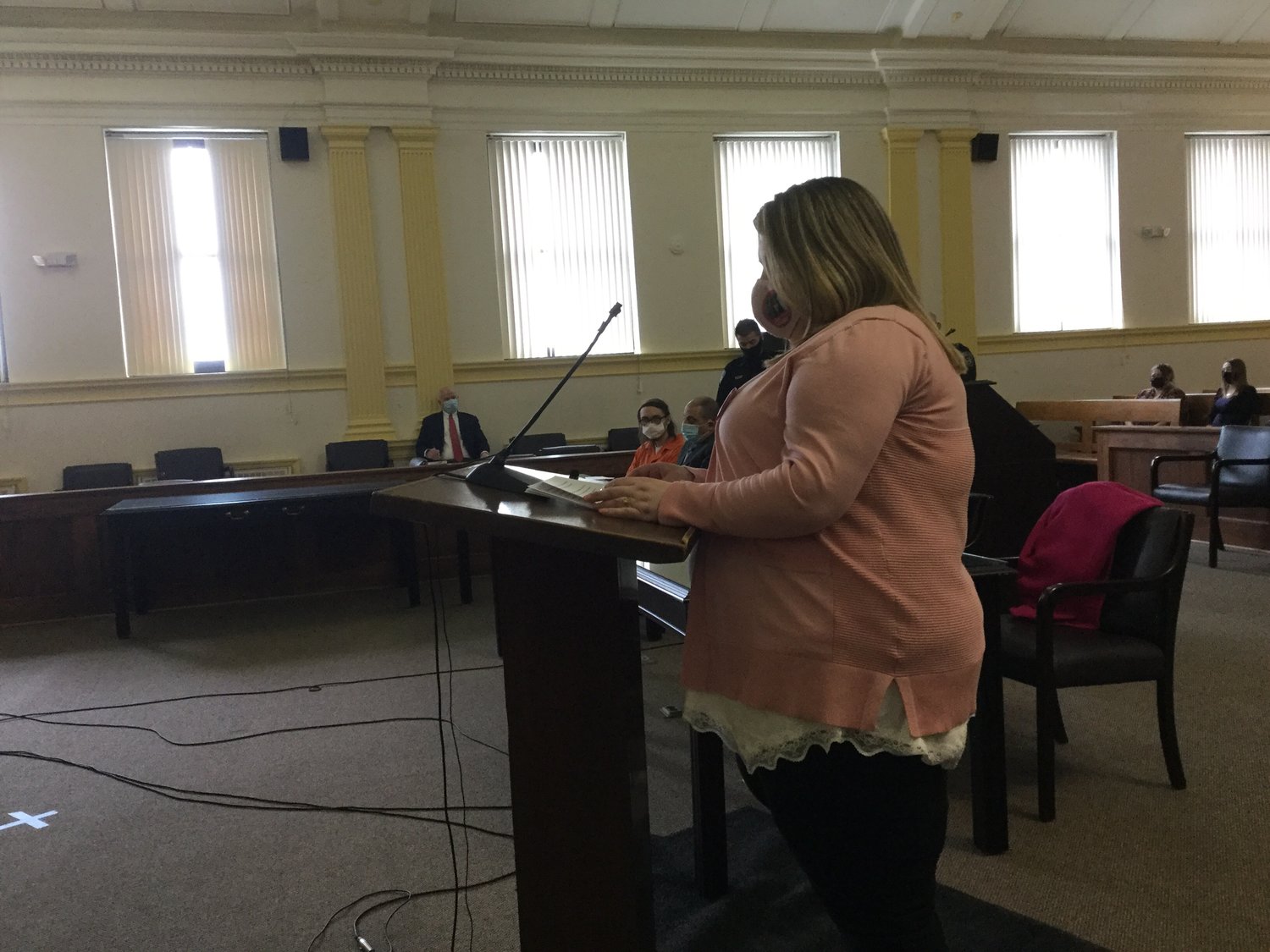 A MOTHER REMEMBERS — Kim Devins, mother to Bianca, also spoke in court Tuesday morning. She recalled happy car rides with Bianca, and spoke of her daughter’s desire to help others. Devins said she is living a “nightmare” as the death and the photos still haunt her.
(Sentinel photo by Sean I. Mills) 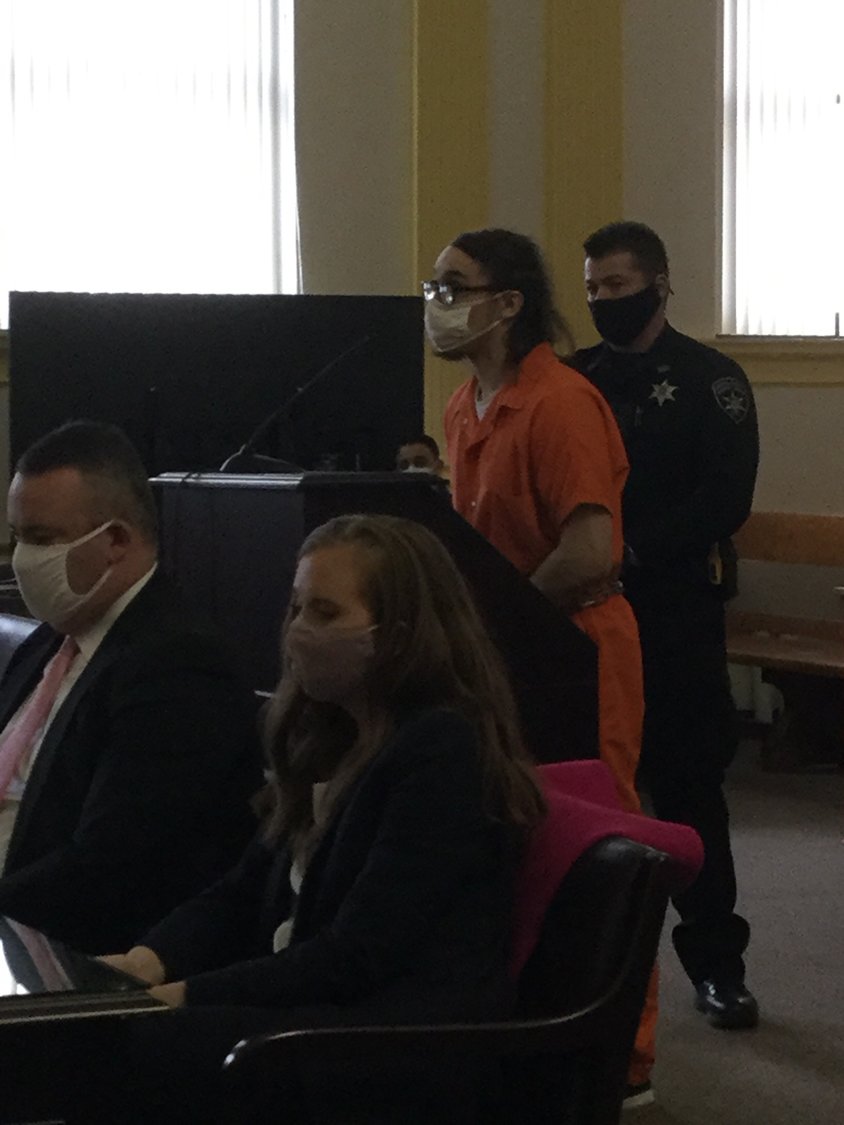 CLARK SPEAKS — Brandon Clark, age 22, expressed his regret and sorrow in court Tuesday for killing Devins. He said he no longer recognizes the person he was on that day, and he wants to use his experience to help others suffering from mental health issues.
(Sentinel photo by Sean I. Mills)
Previous Next
Posted Tuesday, March 16, 2021 6:25 pm
Sean I. Mills
Staff writer
email / twitter

It is a “nightmare.”

That is how the family of murder victim Bianca Devins has described life since the brutal killing of the Utica teenager. Not just from the loss of their loved one, but also from the fact that pictures of her mutilated body are still circulating on the internet, ready to “torture” them all over again.

“The picture, to this day, continues to be sent to me. This is something I know I will have to live with for the rest of my life” said a tearful younger sister, Olivia Devins, in County Court Tuesday morning.

“I have to live the rest of my life saying goodbye to my sister in a funeral home. And I don’t even know if she heard me.”

Olivia spoke at the sentencing of Brandon A. Clark, age 22, Tuesday morning, where he received 25 years to life in state prison on a charge of second-degree murder.

Clark pleaded guilty in February 2020 to not only killing Devins by slashing her throat on Poe Street in Utica on July 14, 2019, but also of uploading pictures of her butchered body on social media shortly thereafter. Those pictures were downloaded by anonymous strangers from across the world, strangers who have repeatedly used those pictures on their own social media or have sent copies directly to Devins’ family members, according to the family.

Devins was 17 at the time of her murder — the same age Olivia is now.

Olivia Devins said Tuesday morning that one day she logged onto Instagram, like teenagers do, and found that several people had changed their profile picture to the photo of Bianca’s death and then invaded her Instagram page. Olivia said she threw down her phone. She has since had to shut down all of her social media.

She said she still sees the picture when she closes her eyes, and wakes up from vivid nightmares when she’s sleeping alone.

“Tears from grief are not normal tears. It is a sensation that consumes you,” Olivia said in court. She shared happy memories of her sister as well, from trips to the bookstore to Bianca’s refound confidence after getting help with mental health issues. But Olivia’s statement was overcome with the trauma she still suffers.

“This is no longer a nightmare, this is my life,” she told the courtroom, which was filled with friends and family of Bianca. They all wore pink in solidarity.

At his guilty plea in February, Clark admitted to not only killing and photographing Devins, but also recording the murder on a cell phone he had set up. Prosecutors said Clark researched how to kill someone in the weeks leading up to the murder. Prosecutors said Clark had picked out a final song and started playing it on speakers on Poe Street. Prosecutors said he wrapped Devins’ body in his childhood blanket and spray-painted a message on the pavement before slashing his own throat, intending to kill himself.

Clark was saved by responding police and rescue personnel.

“Bianca’s beauty radiated from the inside out. Bianca brought joy to all those who knew her,” said Kim Devins, Bianca’s mother, in the courtroom. “Without her, I don’t know who I am. With the death of your child comes unimaginable, indescribable pain.”

Kim Devins spoke about her daughter’s desire to become a psychologist and help other struggling teens. She spoke about happy car rides and a loving daughter. But she also spoke about the fear.

“I now live my worst nightmare every day,” Kim Devins stated. She said she fears that Bianca’s younger siblings, when they are old enough to use social media, will also be “tortured” by people sending them the photos. “I am haunted every day by the images of my precious daughter being murdered.”

When it was his turn to speak, Clark expressed remorse for Devins’ death and his own shock at how he could have done this horrible deed.

“I hate myself for what I did to her. I don’t know why. I don’t know who I was that day. It disgusts me,” Clark said in court. “It’s like a nightmare. Every day I wish I could wake up and it not be real, it not be me. I have to live with the guilt and the shame. She didn’t deserve that.”

Judge Michael L. Dwyer asked Clark why, if he was so apologetic at his guilty plea and so apologetic now, did he spend last summer trying to take back his plea and go to trial. Clark said he didn’t fully understand the criminal justice system and he thought he would be “doing myself a disservice” by accepting the maximum sentence.

Clark said he wanted the court to fully explore his mental health so that he could possibly help others in the future. That’s why he wanted to write a book about his experience, Clark stated.

After the sentencing, Devins’ grandfather, Frank Williams, said Clark’s apology “rings hollow”. He said forgiveness will be up to a higher power than the Devins family, and they will be at all future parole hearings to keep Clark in prison for as long as they can. Williams also said the family will be continuing a scholarship in Devins’ honor. They are still working with local legislators to try and make it a crime to save and share victim photos on the internet.

“This sentence will serve as justice for Bianca and also protect our community from a cruel murderer,” Williams said. 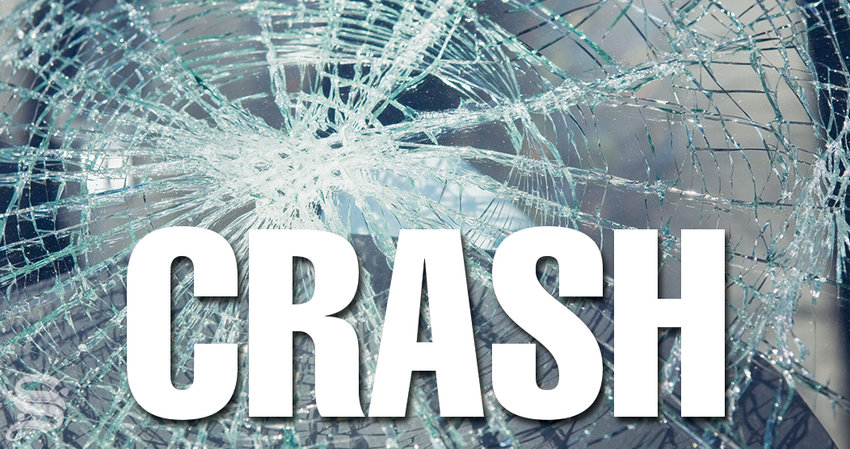