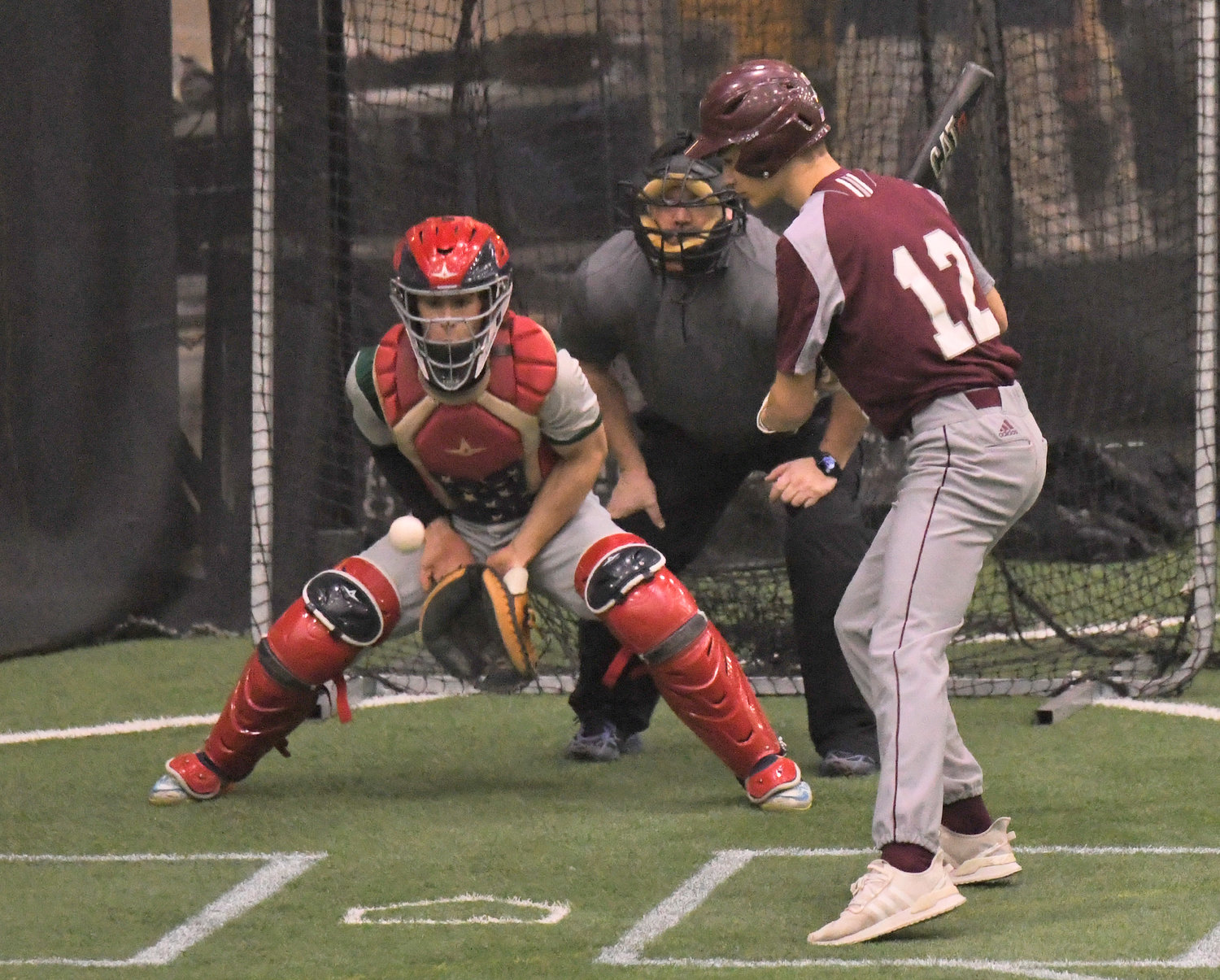 VETERAN BACKSTOP — Westmoreland catcher Caleb Miller blocks an errant pitch during a four-team scrimmage Tuesday at Accelerate Sports in Whitesboro. Miller, a senior co-captain and five-year starter, will be the team's number one starting pitcher and catch when he's not on the mound. At the plate is Oriskany's Karsten Bates.
(Sentinel photo by John Clifford) 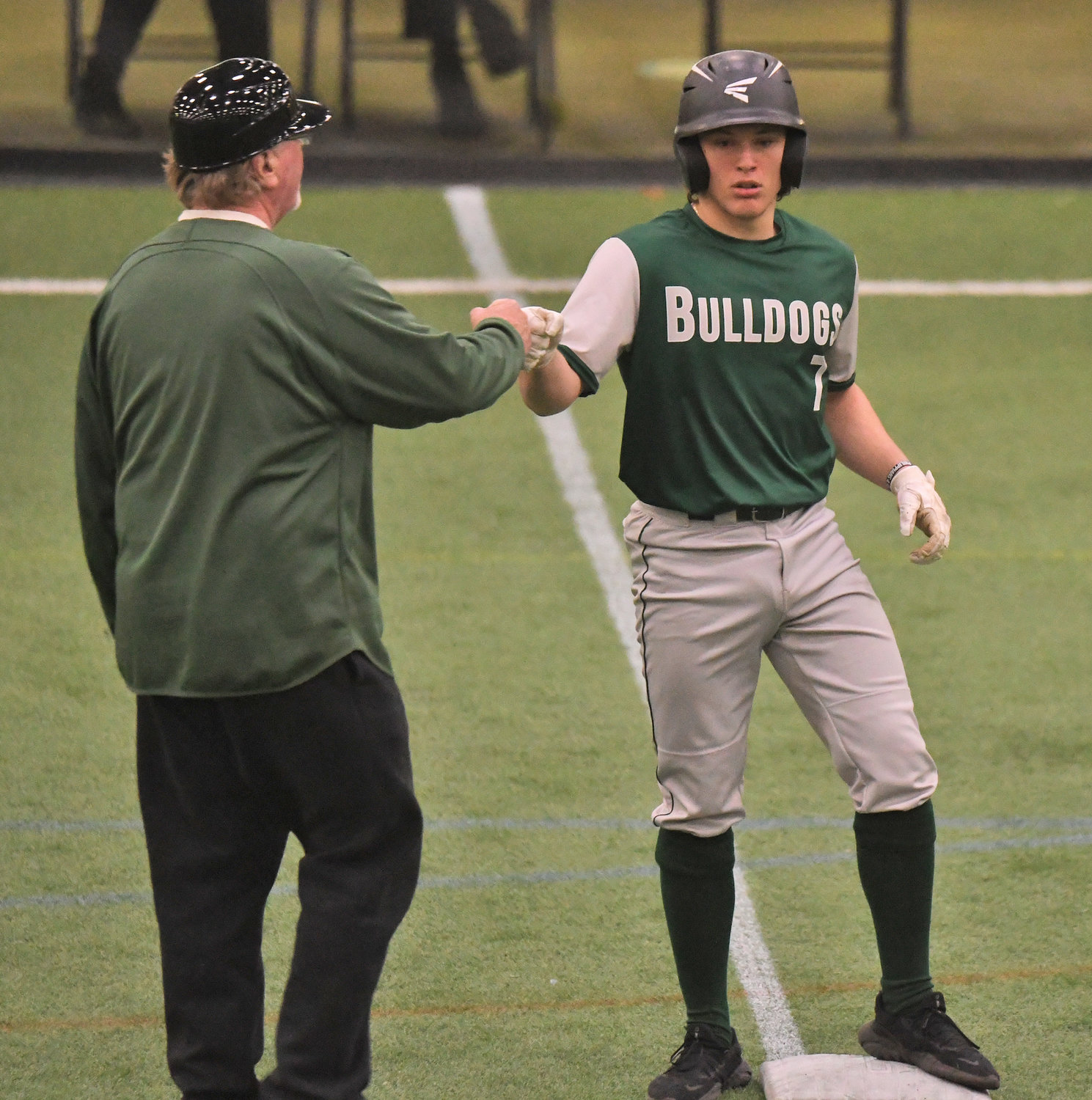 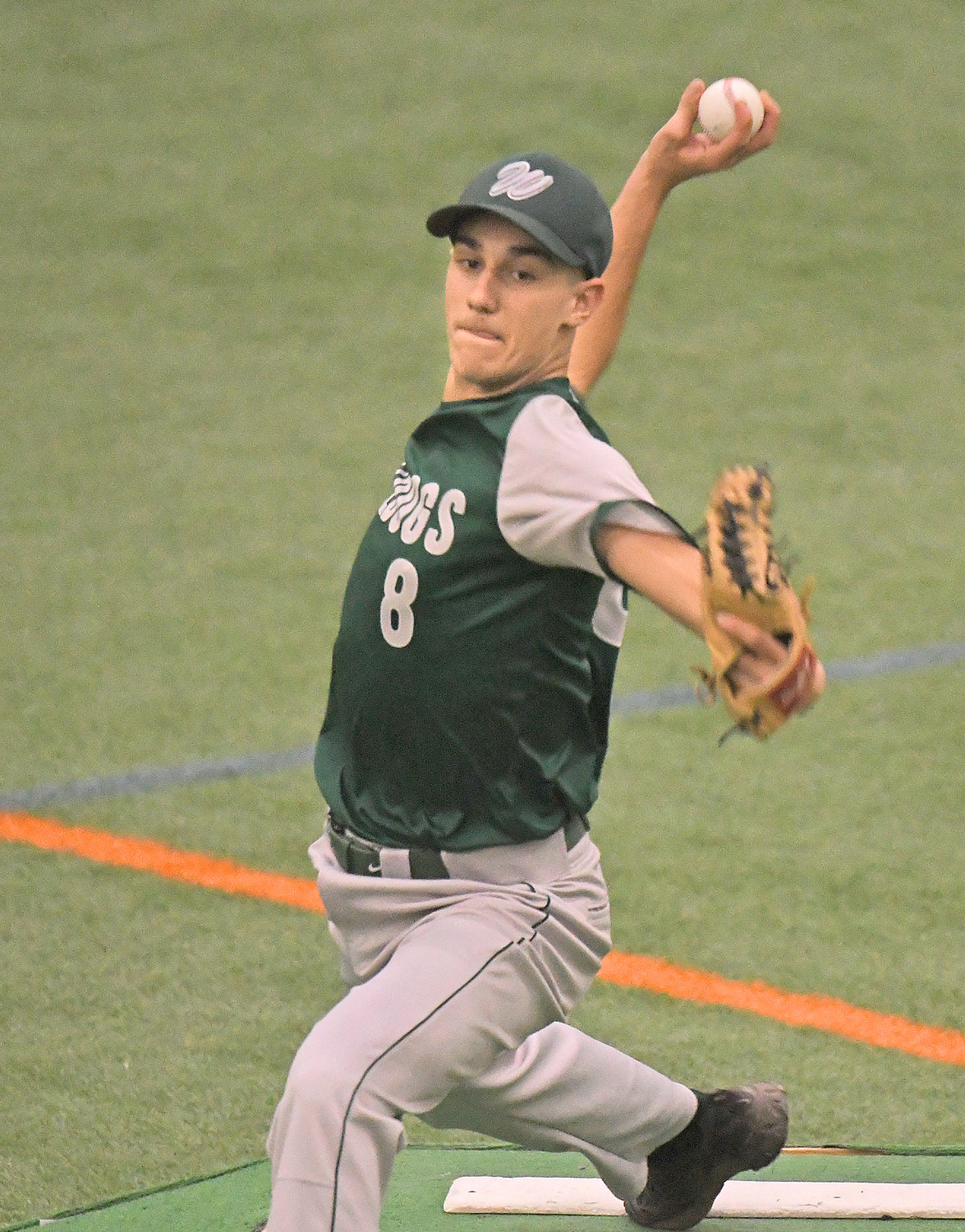 BULLDOG HURLER — Westmoreland sophomore Hunter Kierpiec delivers a pitch against Oriskany at a four-team scrimmage at Accelerate Sports in Whitesboro Tuesday. The first-year varsity player will be the team's number two starter on the mound and will play shortstop as well.
(Sentinel photo by John Clifford)
Previous Next
Posted Friday, April 1, 2022 8:00 am
Steve Jones
Sports writer
email / twitter

The Bulldogs open the season hosting Clinton in non-league play today 4:30 p.m. The team was supposed to open at Adirondack Wednesday but it was postponed.

Engelhart, now in his 10th season as head coach, has compiled a career record of 71-77. The team was 6-7 last season, with a 1-0 loss to South Lewis in the first round of the Section III Class C-1 playoffs.

"I am very excited about this year's squad. We have a nucleus of experienced returning varsity players, including a solid pitching staff. They are very focused and have worked extremely hard since we started," Engelhart said.

Two senior co-captains will lead the way for the Bulldogs. fifth-year starter Caleb Miller is behind the plate but is also the team's top pitcher. He batted .574 last season with 20 RBIs. Pitcher-outfielder Josh Suber is in his fourth year on varsity.

Suber has been the team's leadoff hitter every season his been on varsity, and that won't change. Miller will bat second again. "We got a ton of speed at the top of the lineup, which is always an asset in sports, especially baseball," Engelhart said. After those two hitters will be three middle-of-the-lineup batters — junior Michael Scalise, senior Carson Nestved and junior Owen Davison. Then it will usually be sophomore Hunter Kierpiec, 6-foot-2 junior Mitchell Holmes, sophomore Anthony Sawanec and sophomore Tyler Szarek in one combination or another. Senior Jerry Fiorini will also start, the coach said.

"We've got some kids that can go gap to gap. And because of our speed we're going to be thinking two. If we can take the extra base we're gonna go for it. We are going to steal a ton of bases," the coach said.

"Defensively we have kids up the middle," said Engelhart of the team's strength from catcher to second base and shortstop to centerfield. "We're strong up the middle." When Miller pitches, Fiorini will likely catch. Kierpiec is the primary shortstop when he's not on the mound. Scalise will play second and shortstop. Sawanec is also a second baseman, as is senior Trevor Nelson. Junior Phillip Davies is a third baseman as well. Szarek can play most infield and outfield spots.

Nestved will be at third base. Davison plays first along with senior Matt Doyle and junior Jonathon Klar. In the outfield along with Suber will be Fiorini, Holmes, Sawanec and Szarek. The coach called Sawanec a "super utility guy."

On the mound, after Miller will be Kierpiec. The team has several others capable of being the team's third starter: Fiorini, Scalise, Davison, Kierpiec and Sawanec. Suber is the team's closer. Also available to pitch are Davies and Doyle. "We're deeper than normal, especially for a Class C schools," the coach said. "That's definitely one of our assets, the depth of our pitching."

The team is "very focused this year," the coach said. "Our goal is to come out from the first pitch and compete every game." He continued, "It's easy to say but I think these guys can put wins and loses behind them and focus on the game that day."

The long-term goal is to secure a home game or two in Sectionals. "This is the year I circled when they'd be seniors," Engelhart said of this year's group. "We're working hard but we're still having fun. We have the team chemistry that you can't manufacture."

The team plays in the Center State Conference, which has gone back down to three divisions after being at four last season. As always, the team is in a division with Waterville and West Canada Valley, but this year it shares a division with Cooperstown (defending sectional champion), Herkimer, Frankfort-Schuyler and Sauquoit Valley. It also means the schedule will go from having six league games to 12. "A great division, very competitive," Engelhart said.