VERNON — Fresh and clean water is coming down the pipeline soon as the town of Vernon gears up for a water project after receiving $3 million from the federal omnibus funding bill. On Friday, Rep. …

FUNDING ON TAP — Vernon Supervisor Randy Watson speaks with Congresswoman Claudia Tenney about the town of Vernon, thanking her for her efforts to help secure $3 million in funding for the town’s water project.
(Sentinel photo by Charles Pritchard) 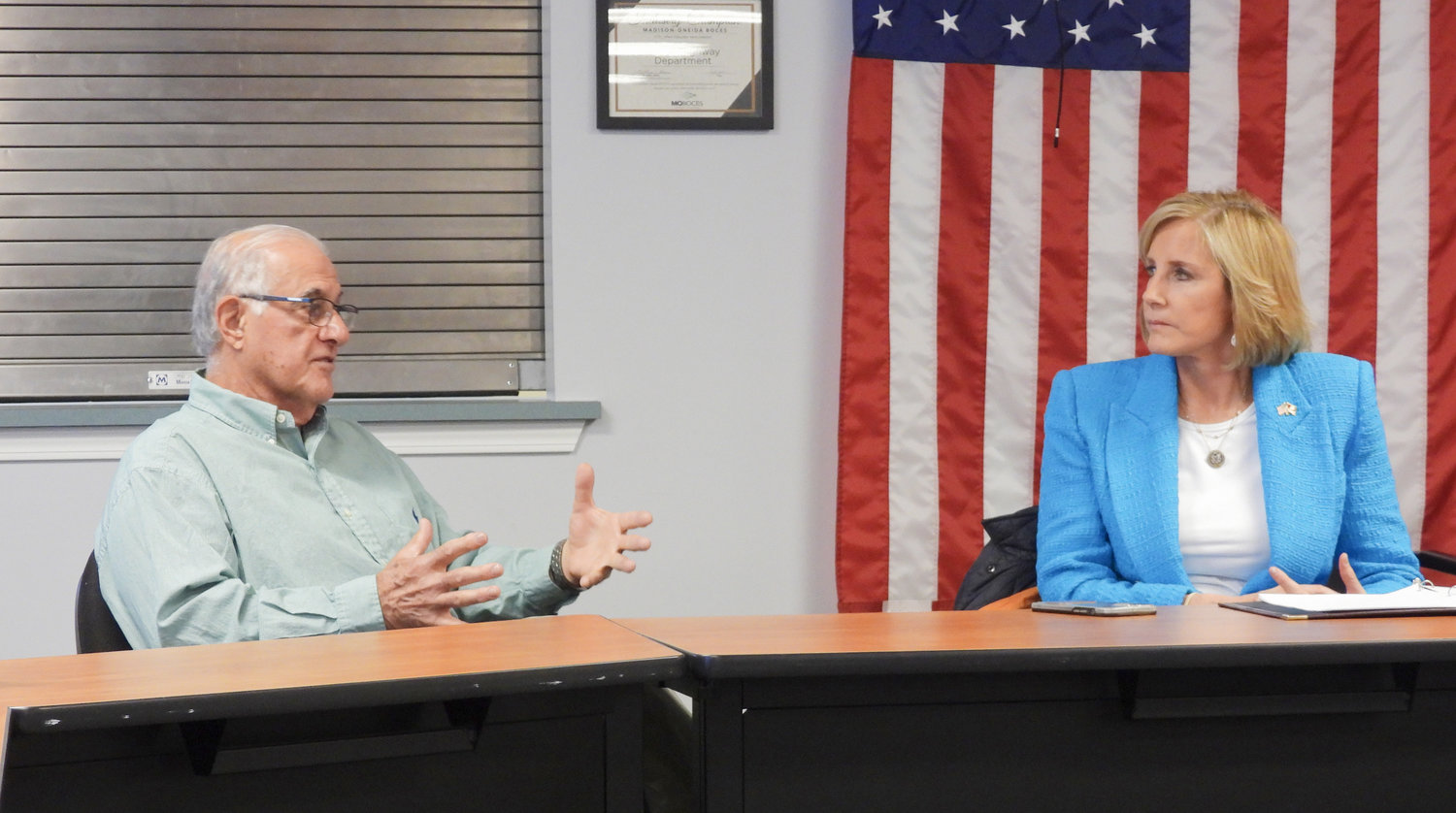 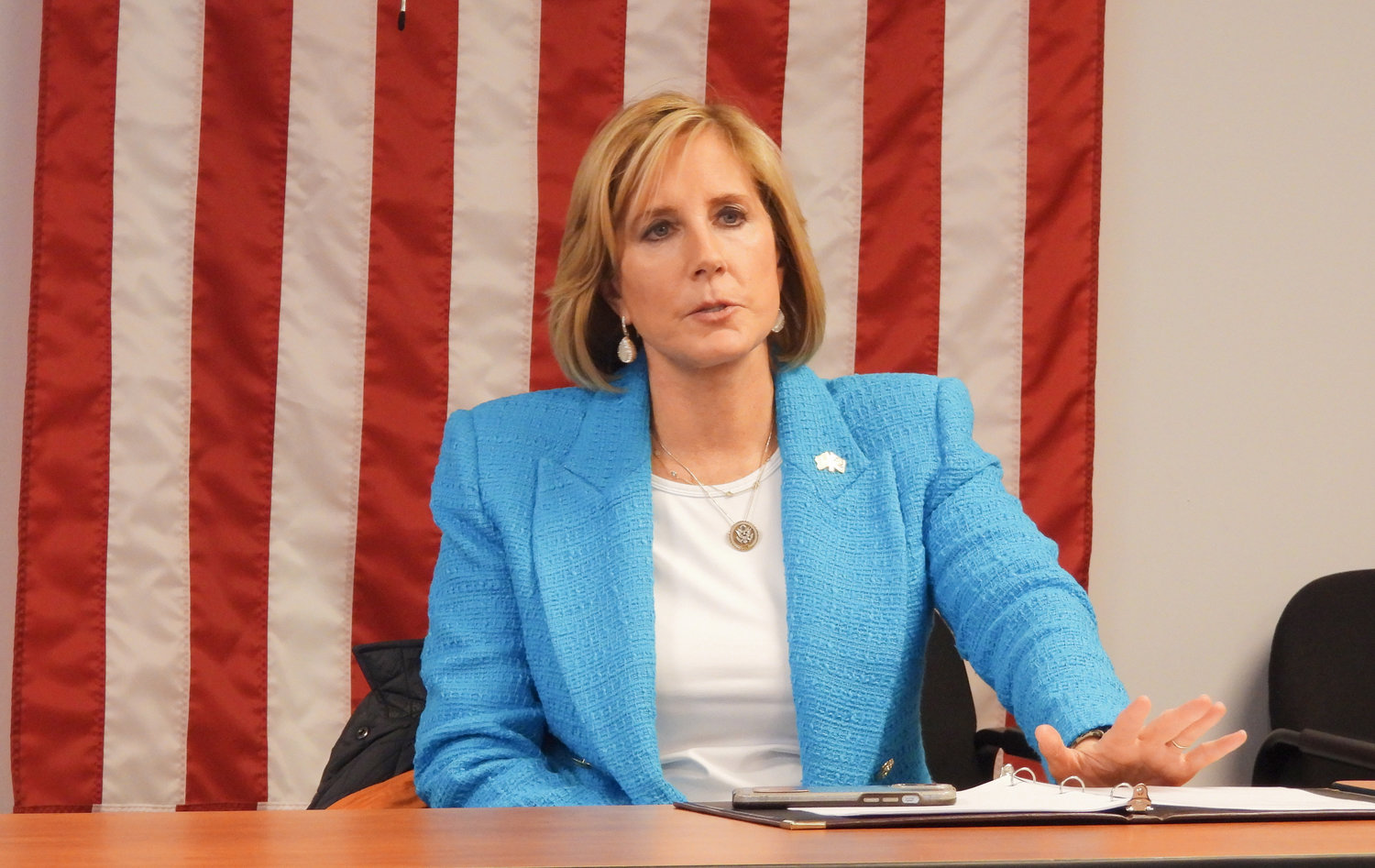 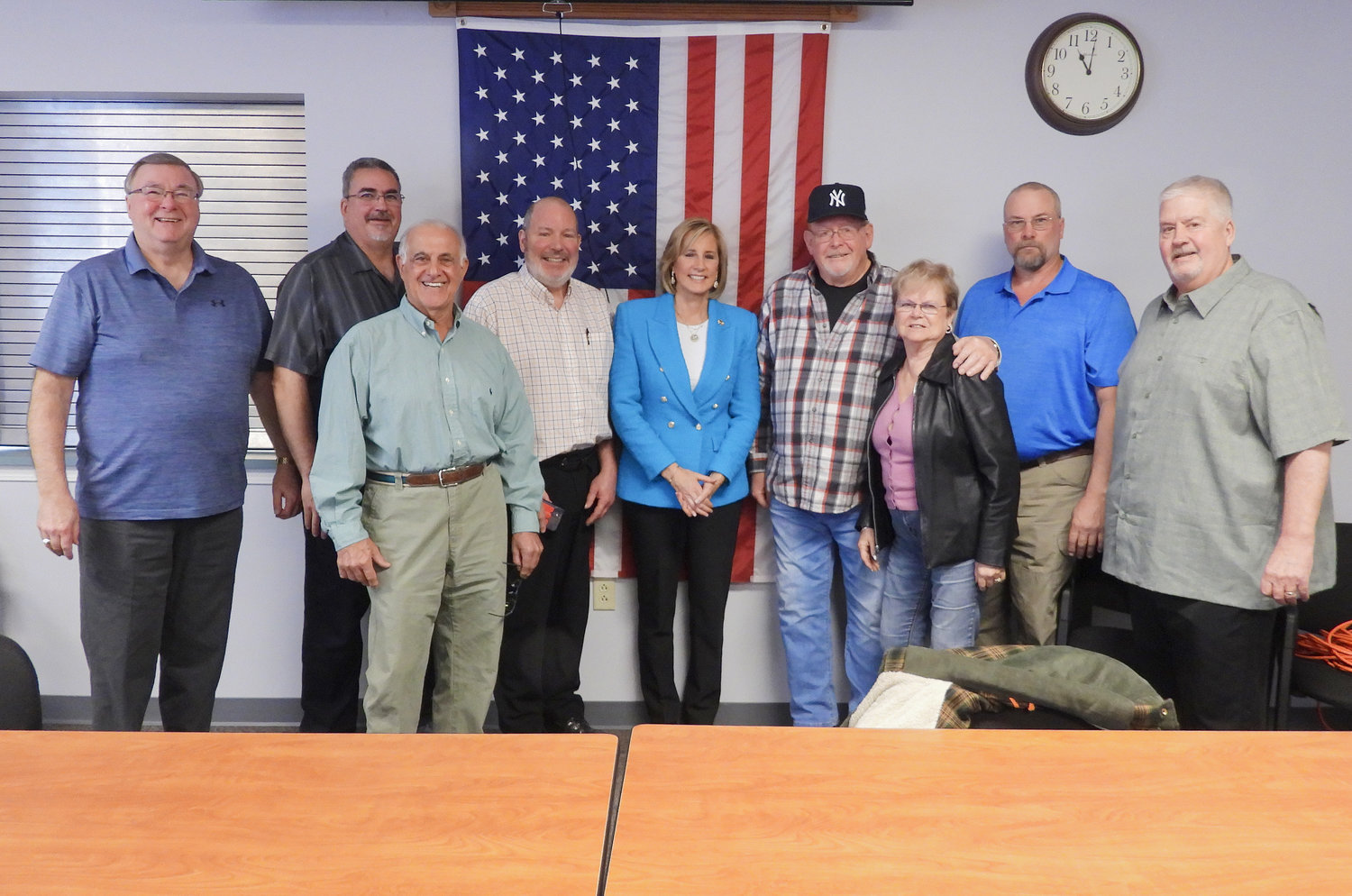 VERNON — Fresh and clean water is coming down the pipeline soon as the town of Vernon gears up for a water project after receiving $3 million from the federal omnibus funding bill.

On Friday, Rep. Claudia L. Tenney, R-22, New Hartford, visited Vernon to congratulate Vernon town officials on receiving the funding, which was included in the omnibus funding bill for the remainder of the Fiscal Year 2022.

Areas in Vernon and Vernon Center have seen steep declines in water quality over the recent years. Residents have reported hard, salty water from wells that destroy fixtures and ruin clothes. Engineering firm Barton and Loguidice Engineers tested water in the Vernon center back in January of 2020 and found contaminated wells on 11 different properties.

Tenney visited a property before meeting with town officials and was shocked to see what the water was doing and how many times residents were changing out pipes and fixtures. “It’s really a public health hazard that needs to be corrected,” she said.

“This has been a problem plaguing Vernon for a long time,” Tenney said. “Last year, we started Community Funding Projects, but some people call it pork. But I call it an opportunity for people and representatives to steer money to problems that would otherwise not be done.”

“We’re so glad this got approved,” she continued. “It took a lot of time. There were about 150 projects. They were vetted and went through the appropriations process. Some were rejected, some were accepted, we had to amend others, and it was an arduous situation to get this in the budget. But we got it in, and we got it passed. And the town of Vernon deserves this.”

Tenney thanked Vernon town officials for their hard work, but they thanked Tenney in turn for her activism for Vernon.

“You thanked us, but we really need to thank you for your efforts,” Vernon Deputy Supervisor Gene Bennati said. “This is really huge for us.”

“Thank you so much, Tenney. We needed your support, and this would be a dead project if you didn’t step in,” Vernon Supervisor Randy Watson said.

“What’s stamped in my mind was when [Tenney] came out and toured, going to homes and seeing the water sample from one of the homes. You could uncap it and smell it,” Oneida County Legislator Keith Schiebel said. “Thank you, Tenney, for taking the time to visit. For the people that live there, this is critical... Thank you for seeing this through.”

The Town of Vernon currently has $6.1 million total, not counting approved loans, and a project cost looking to be around $8.7 million.

Watson said this money helps the town of Vernon fund the project without relying entirely on loans. Loans would still be used but can be paid back with funding and grants. Without this funding, Watson said the town of Vernon would be over the allowable rate per household. “This funding will keep us under that,” he added. “Tenney is the reason this water project is coming.”

Watson followed this up by saying the town of Vernon applied for another grant that could award around $3 million if they’re accepted. Watson said the town of Vernon is pursuing every avenue to fund the Vernon water project to bring the water rate down as much as possible for the upwards 240 people who will be serviced.

The congresswoman lamented how many times money like this is focused on major metropolitan areas such as New York City and Albany, and smaller towns and villages are left with little to nothing.

“Small towns are where we need [funding] the most,” Tenney said. “We know the town of Vernon will do a good job, spend it in the right way, and do right by the taxpayers.”

The town of Vernon has authorized Delta to commence project work and has made the final application to the New York State Department of Transportation for the conveyance of land for the construction of the Vernon Center Water District water tower.

Councilor John Peters said in the past, he reached out to Delta to do engineering work as they were local but couldn’t at the time due to a lack of engineers and had to turn it down. But now, years later, Delta is overseeing the project.

The local engineering firm based in Vernon and right down the road from the Vernon Town Hall has scheduled survey fieldwork to start on April 18 for the water project.