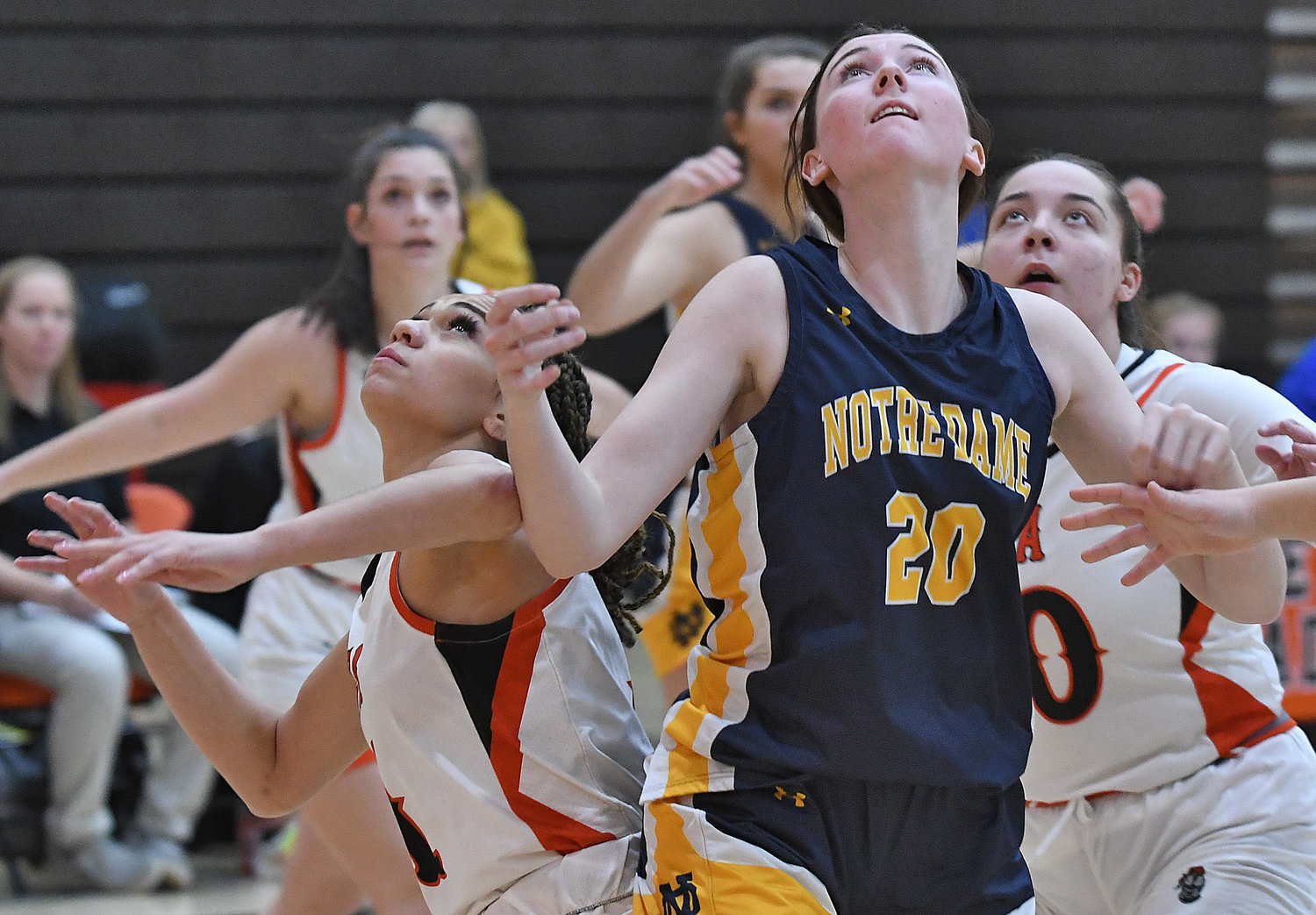 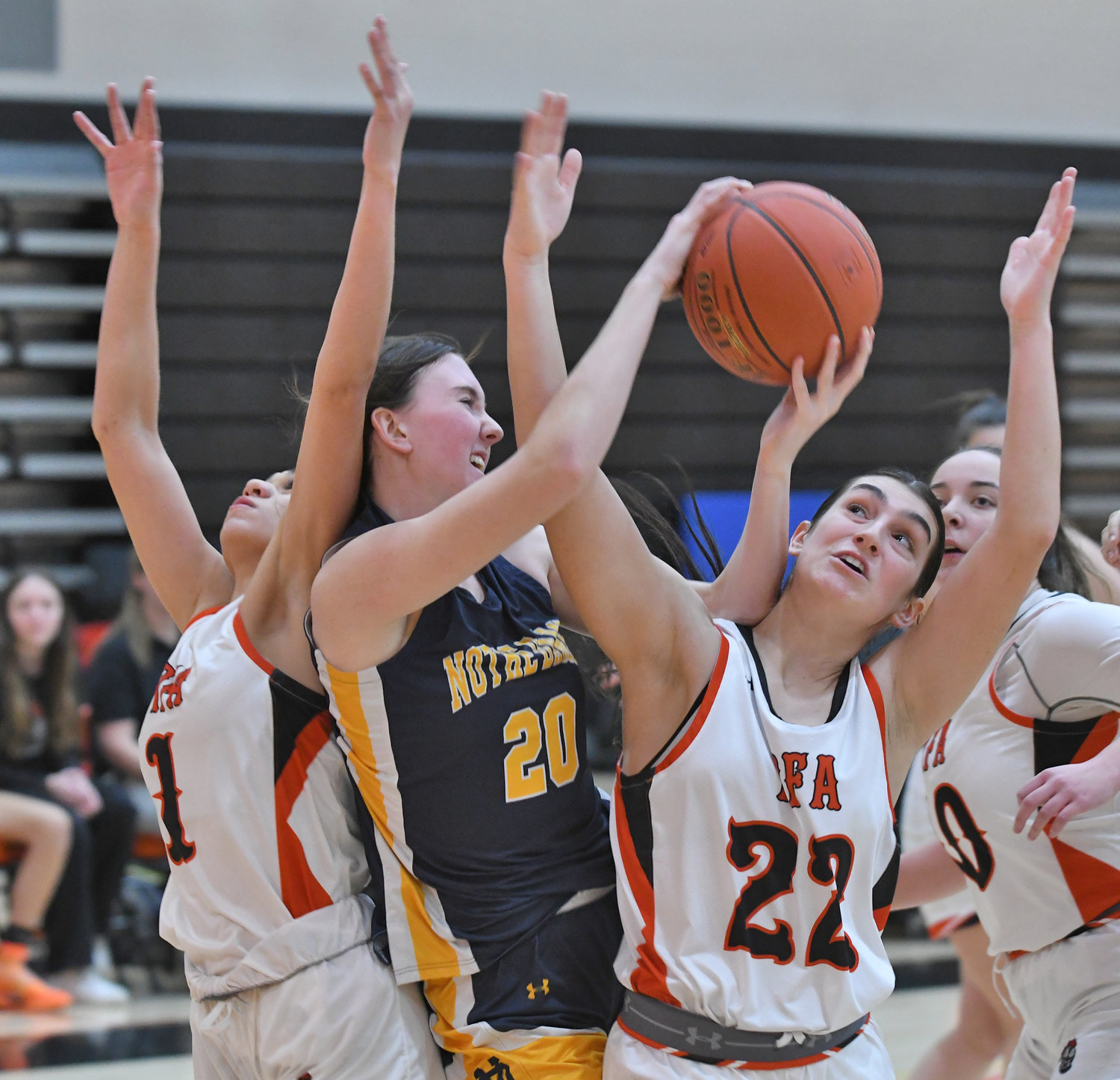 Alysa Jackson, left, and Mia Mirabelli of Rome Free Academy surround Utica-Notre Dame’s Ella Trinkaus in a battle for the ball Tuesday at RFA. Trinkaus led the Jugglers with 24 points but RFA won 62-54. Jackson and Mirabelli scored 10 each.
(Sentinel photo by John Clifford) 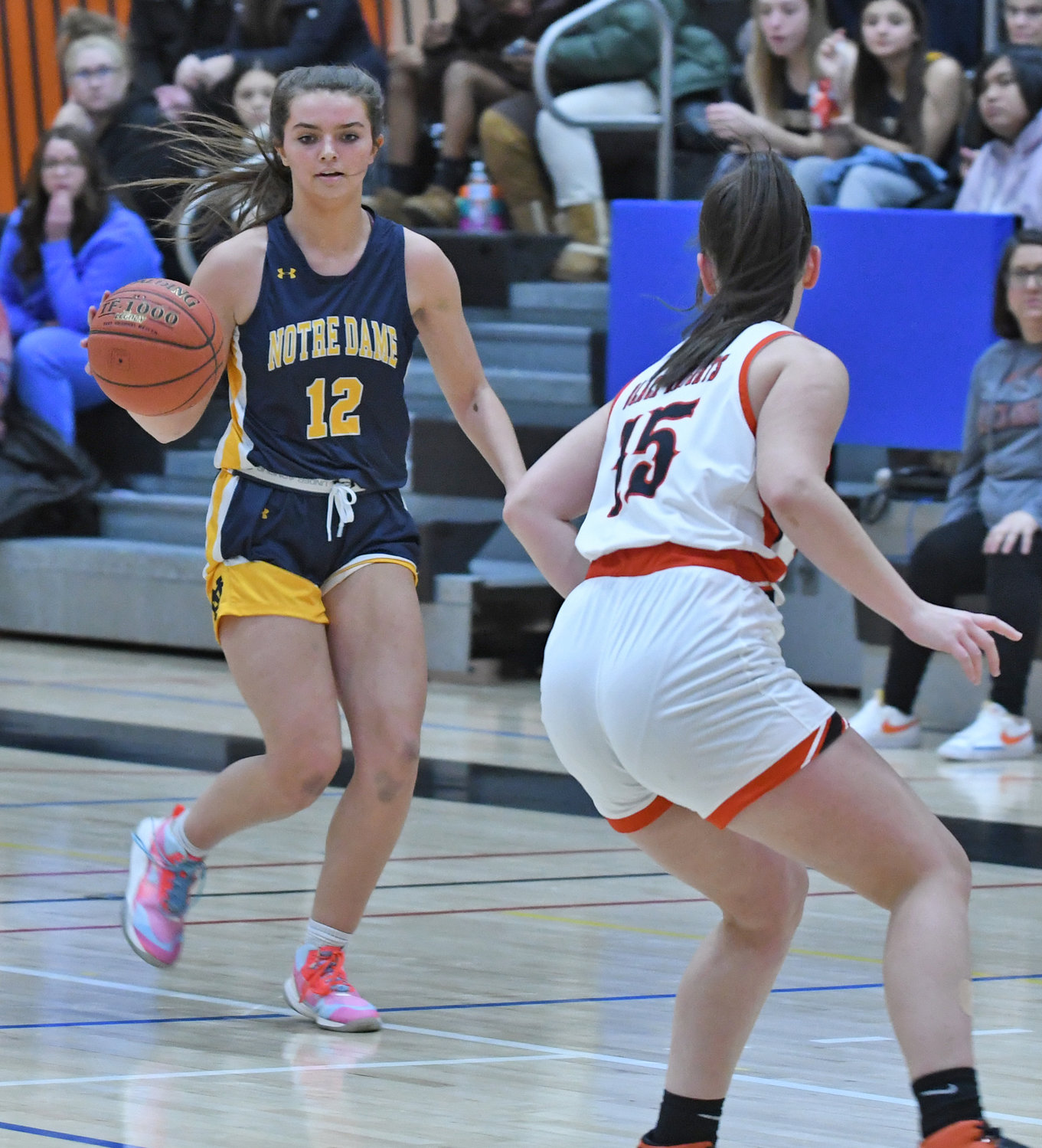 Notre Dame's Sydney Sehring brings the ball up the court with Rome Free Academy's Emma Wright guarding Tuesday at RFA. The Black Knights won 62-54 in a matchup of the teams at the top of the two Tri-Valley League divisions.
(Sentinel photo by John Clifford) 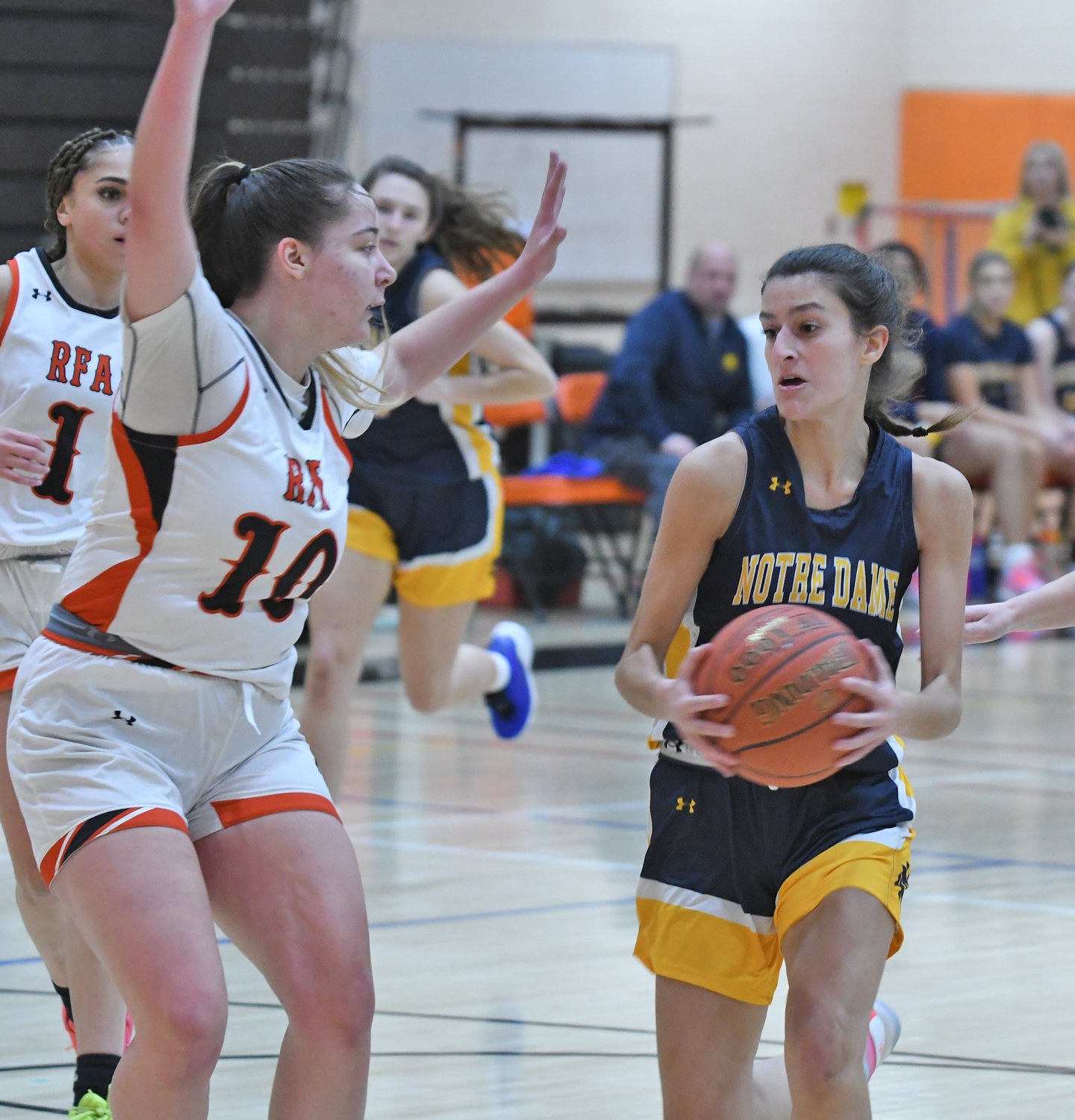 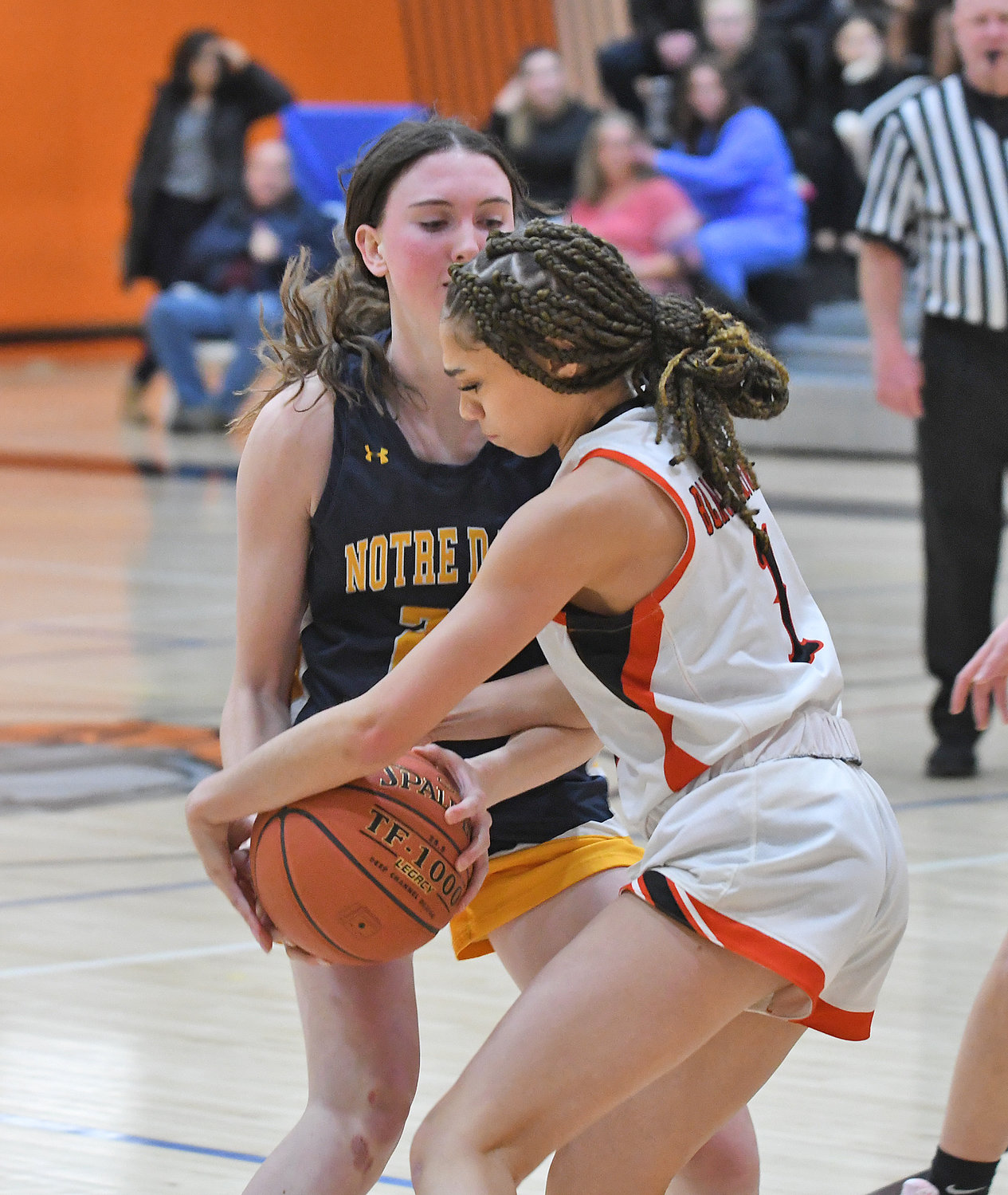 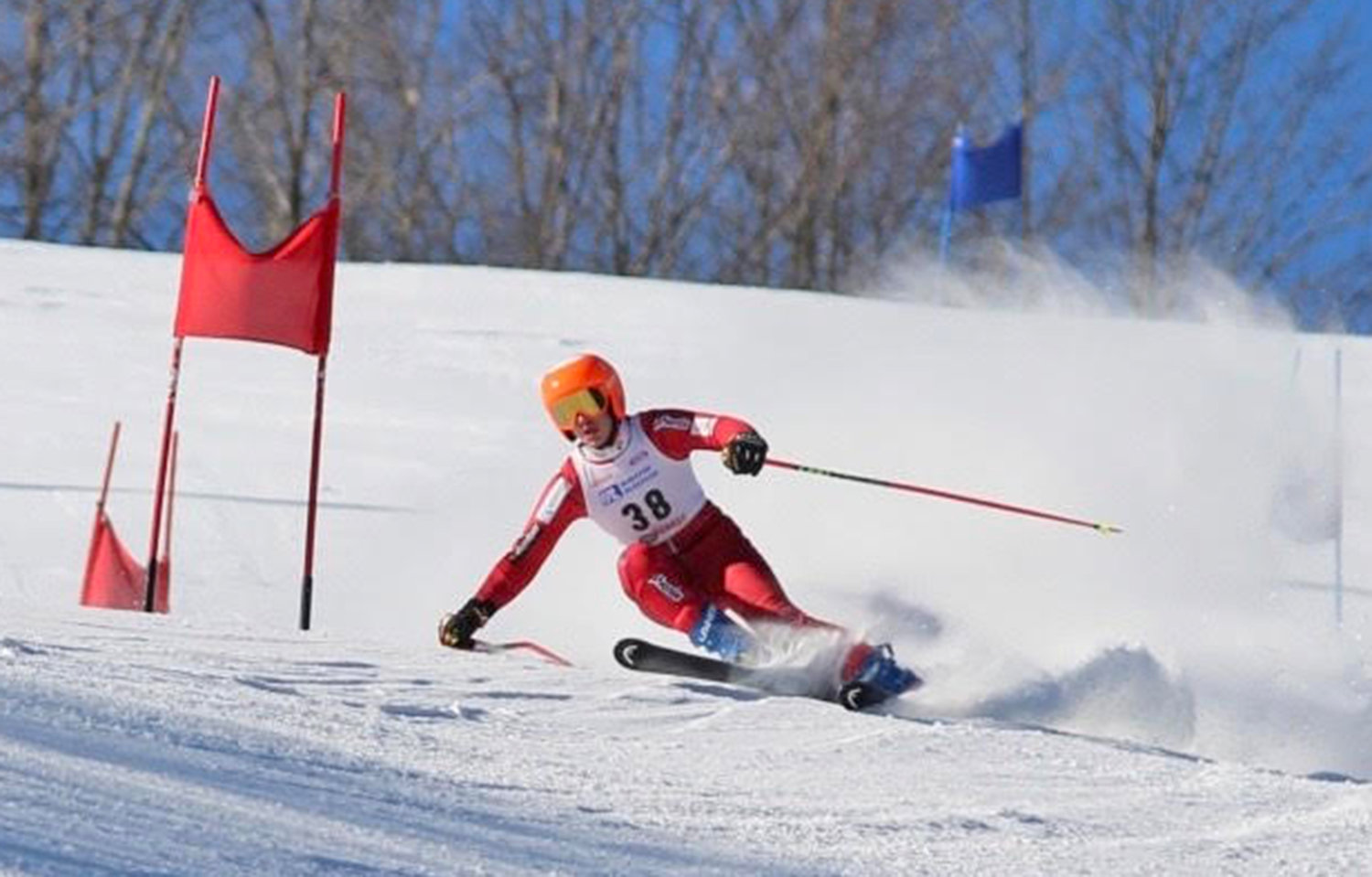 Billy Bernabe of Camden had two race wins in the alpine team's first competion of the season Monday at Snow Ridge.
(Photo submitted) 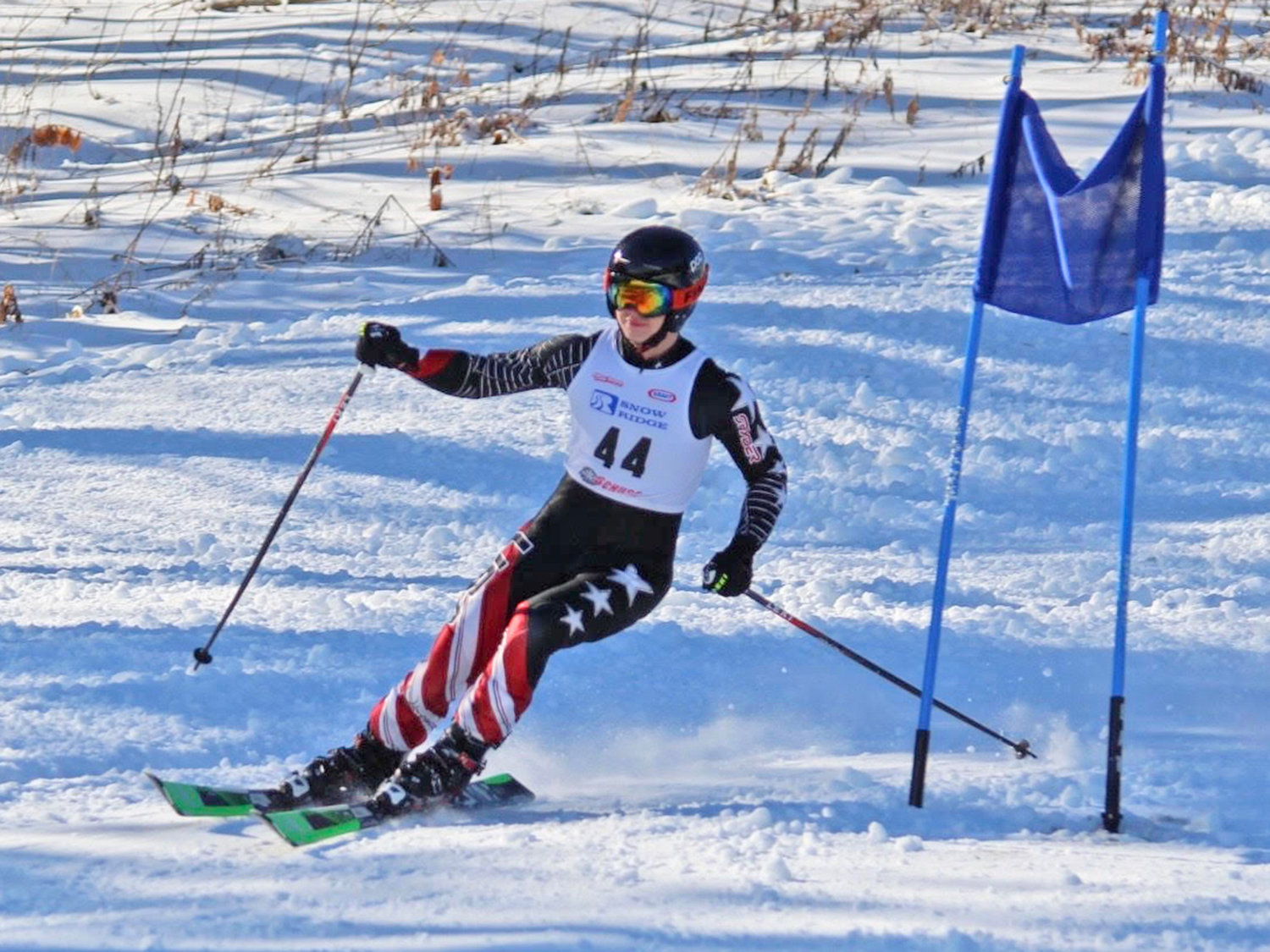 Alysa Jackson and Mia Mirabelli contributed 10 points each for the Black Knights in the win.

The Knights led 12-11 after a quarter and built a 29-23 halftime advantage. Outscoring the Jugglers 20-10 in the third gave RFA a 16-point cushion.

Notre Dame is the leader in the Pioneer Division at 6-1 (7-6 overall). The Jugglers host Holland Patent at 7 p.m. Friday in the league.

Trailing 23-15 at the half, the Thomas R. Proctor girls basketball team shut out host Holland Patent in the third quarter to get back in the game. The Raiders eventually won 42-39 in overtime for a TVL win Tuesday.

The Raiders outscored the Golden Knights 4-1 in overtime.

Proctor (6-4) hosts Whitesboro in the league at 7 p.m. Thursday.

Waterville used a 20-2 third quarter to run away from host Frankfort-Schuyler in girls basketball Tuesday. Waterville won 55-36 in the Center State Conference matchup.

Waterville led 27-19 at the half then blew the game open.

Natalee Collins led the way with a game-high 20 points and had 14 rebounds for a double-double. Teammate Valorie Ford also had a double-double, with 16 points and 16 boards. Adrienne Neff contributed 12 points.

Waterville (5-6) hosts Clinton at 7 tonight in the league.

Reese Fellows scored 14 and had 17 rebounds for a double-double in the win. Analyce Grabowski and Erin Gorinshek had 13 points each and Hanna Burdick scored 11.

Dolgeville’s Payton Comstock had a double-double with a game-high 17 points and 11 rebounds.

West Canada is now 13-0 and will play at Adirondack at 6 tonight in the league.

Dolgeville (8-4) plays at Frankfort-Schuyler at 7 p.m. Monday in the league.

The Central Valley Academy boys basketball team defeated host New Hartford 72-65 Tuesday in a clash of teams at the top of the two TVL divisions. The Thunder’s win pushes the team’s record to 12-0.

CVA led 18-11 after a quarter and 30-25 at the half. The Thunder then outscored the Spartans by nine in the third to extend the lead. New Hartford rallied in the fourth but couldn’t get the game tied.

Zach Philipkoski of New Hartford had a game-high 36 to push the career total of the program’s leading scorer over 1,500. He also had 13 rebounds for a double-double. Colton Suriano had a double-double as well, with 12 points and 11 boards.

CVA remains atop the Pioneer Division and will play at Camden at 6:30 p.m. Friday in the league.

New Hartford (7-6) leads the Colonial Division and will host RFA at 7 p.m. Friday.

Casey Clausen had 33 saves in the win.

Oswego had goals by Mia Fierro and Alaina Diblasi while Jordan Caroccio picked up an assist. Goaltenders Nyah Dawson and Chelsea Storms combined for 20 saves for the Buccaneers.

The Warriors improve to 8-2 on the season while Oswego falls to 5-5. Clinton plays next against South Glens Falls at 7:15 p.m. Friday at home at the Nexus Center in Utica.

The Whitesboro hockey team needed a three-goal third period to come from behind in a 6-4 win at home over Oswego Tuesday.

Oswego led the Division 2 league game 4-3 after two periods. But the Warriors scored three in the third to turn a deficit into a lead.

Kris Matthews got the win in net, stopping 18 shots for Whitesboro.

Oswego’s Ian Cady had two goals and Brayden Miller had the other. Goalie Riley Wallace made 29 saves in the loss, allowing five goals. Whitesboro also scored an empty net goal.

Whitesboro (5-10) plays at Cortland/Homer at 7 tonight in the league.

New Hartford trailed 2-1 after two periods on the road against Christian Brothers Academy/Jamesville-Dewitt. The Spartans scored two goals in the third for a 3-2 comback win in Division 2.

Gabriel Syrotynski scored and had an assist for New Hartford. Rowan Gall and Chad Hull also scored. Derek Defazio, Anthony Falvo and Charles Gaetano each had an assist.

Michael Vetter made 16 saves to earn the win.

Billy Bernabe had two wins in the Camden alphine ski teams first competition of the season Monday at Snow Ridge.

The next race is at McCauley Mountain on Monday.

Proctor (2-9) visits New Hartford at 7 tonight in the TVL.

For Cincinnatus, Eli Cree had three kills and six digs.

Cincinnatus (0-3) hosts Sauquoit Valley in the league at 5:30 tonight.