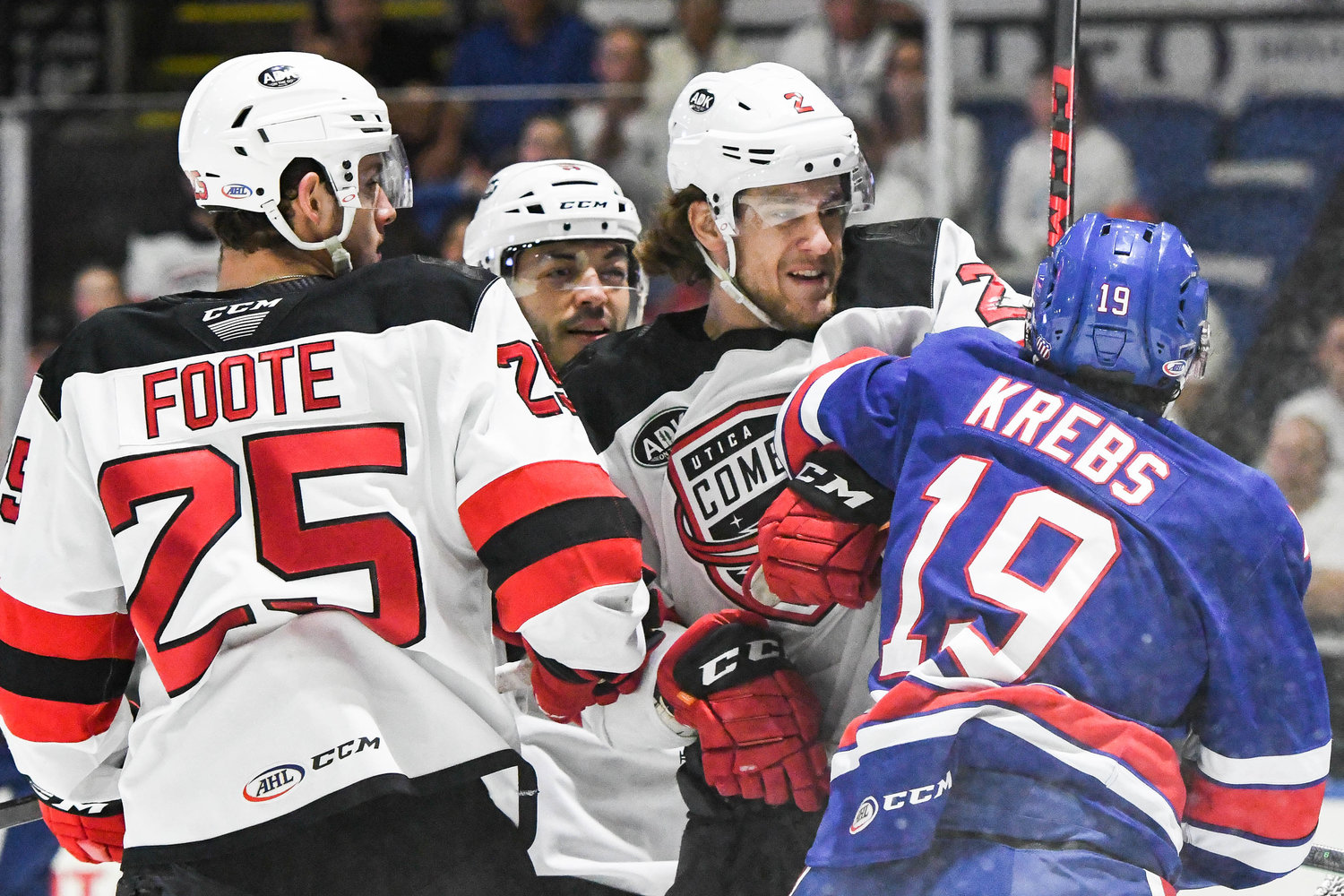 UTICA — The first postseason meeting between the Utica Comets and Rochester Americans has featured a little bit of everything.

So, of course, the battle between the American Hockey League’s North Division rivals culminated in a deciding Game 5 on Thursday in Utica.

The teams got to this point with Utica answering “the bell” in Game 4 – as captain Ryan Schmzler said the Comets needed to do – to secure a victory in Rochester and force another elimination game.

“Elimination games don’t come along very often. So, you get an opportunity to put yourself to the test. We’ve talked about it with our players that your play really speaks for itself when the game is for keeps,” Comets coach Kevin Dineen said. “No matter the situation, there’s a lot of work that goes into it. There’s a lot of preparation.… These are the moments that you get excited about. They don’t come along often. So, it is an exciting time.”

Rochester was playing in its first winner-take-all game since 2014, which ended in a loss to Chicago, according to the AHL.

The winner of the series was set to advance to the division finals to meet the Laval Rocket, which edged Syracuse earlier this week in five games.

Here’s three observations from the series:

Okhotiuk has stood out

Nikita Okhtokiuk has been key for Utica. That’s not to say the Comets other defensemen haven’t also had solid efforts.

The physical defenseman, who made his NHL debut with New Jersey this season, has three assists in four games.

Most notably, he helped provide a little bit of energy for the Comets in Game 4 in a fight against Casey Fitzgerald, who is the son of Devils’ General Manager Tom Fitzgerald.

Casey Fitzgerald and Okhotiuk got into it as Fitzgerald was sticking up for a teammate after Utica’s defenseman knocked him down.

Dineen said Okhotiuk has played an “extremely solid brand of hockey.” He noted that he’s been a mentor to New Jersey prospect Shakir Mukhamadullin. The 20th overall pick in the 2020 NHL draft recently joined Utica after playing in Russia.

“He’s made sure he knows how to get an ATM card, where to have a bite to eat and communicated for our staff,” Dineen said. “You have a teammate right next to you, there’s a lot of little things you bounce off. So, he has shown maturity beyond his years.”

The Comets have been at their best rolling four lines and everyone is contributing.

That hasn’t necessarily happened for the Comets in the series. Dineen noted that there have been “spits and starts of really good hockey” in the first three games. All 19 players contributed in Game 4.

Dineen said there are different ways to have conversations with players in an effort to get them on the same page.

“I’ve seen it many times: Over the course of a playoff run, there’s going to be stretches. I think a lot of times, the longer you go there’s a better chance of your game showcasing what kind of player you are. I think that’s certainly the case that a lot of guys might have been a little quiet in the first couple games, but have really come on,” Dineen said. “Sometimes those things don’t show up on the scoresheet but noticed by us as a staff and noticed by teammates.”

Dineen noted the fan base might have provided some extra juice for the team to get back to Utica in Game 5.

While it hasn’t been all sunshines and rainbows between the team’s fan bases – there’s been a lot of chatter on social media between them and some less-than-stellar moments in the crowd during games – the games have drawn attendance.

Utica players have talked about their appreciation for the enthusiastic fans while playing their first season in Utica. “You get excited to get another game in Utica,” Dineen said. “The atmosphere has been really electric.”