Utica Post’s Joey Gentile throws to first base during the District V game against Ilion Post on Wednesday. Gentile’s sacrifice fly with one out in the top of the eighth inning that gave Utica the go-ahead run in the eventual 12-10 win.
(Sentinel photo by Alex Cooper) 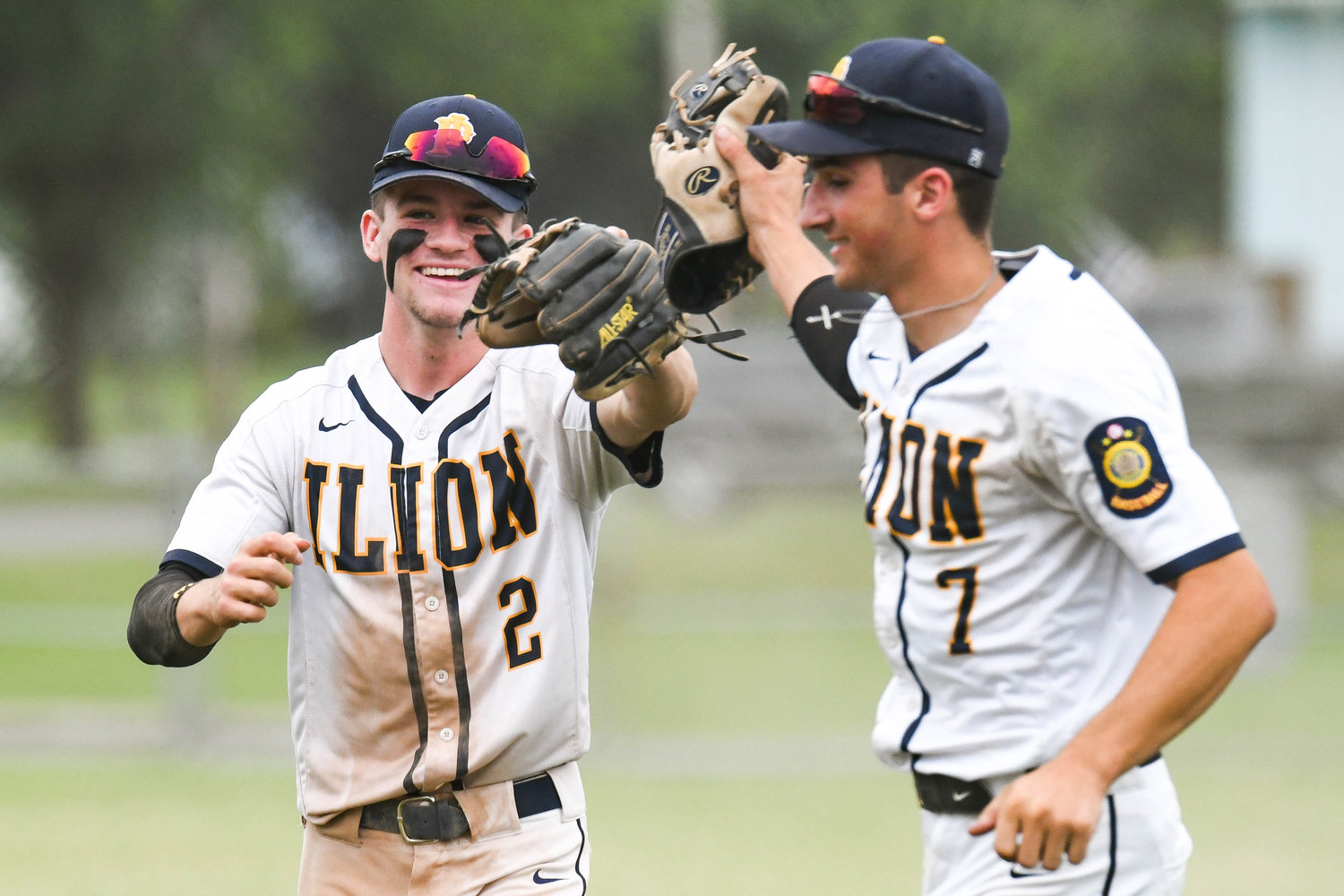 Ilion Post’s Tanner Warren (2) and Alan Meszler (7) celebrate after making an out during the game against Utica Post on Wednesday at Central Valley Academy in Ilion. Utica Post won 12-10 in eight innings.
(Sentinel photo by Alex Cooper) 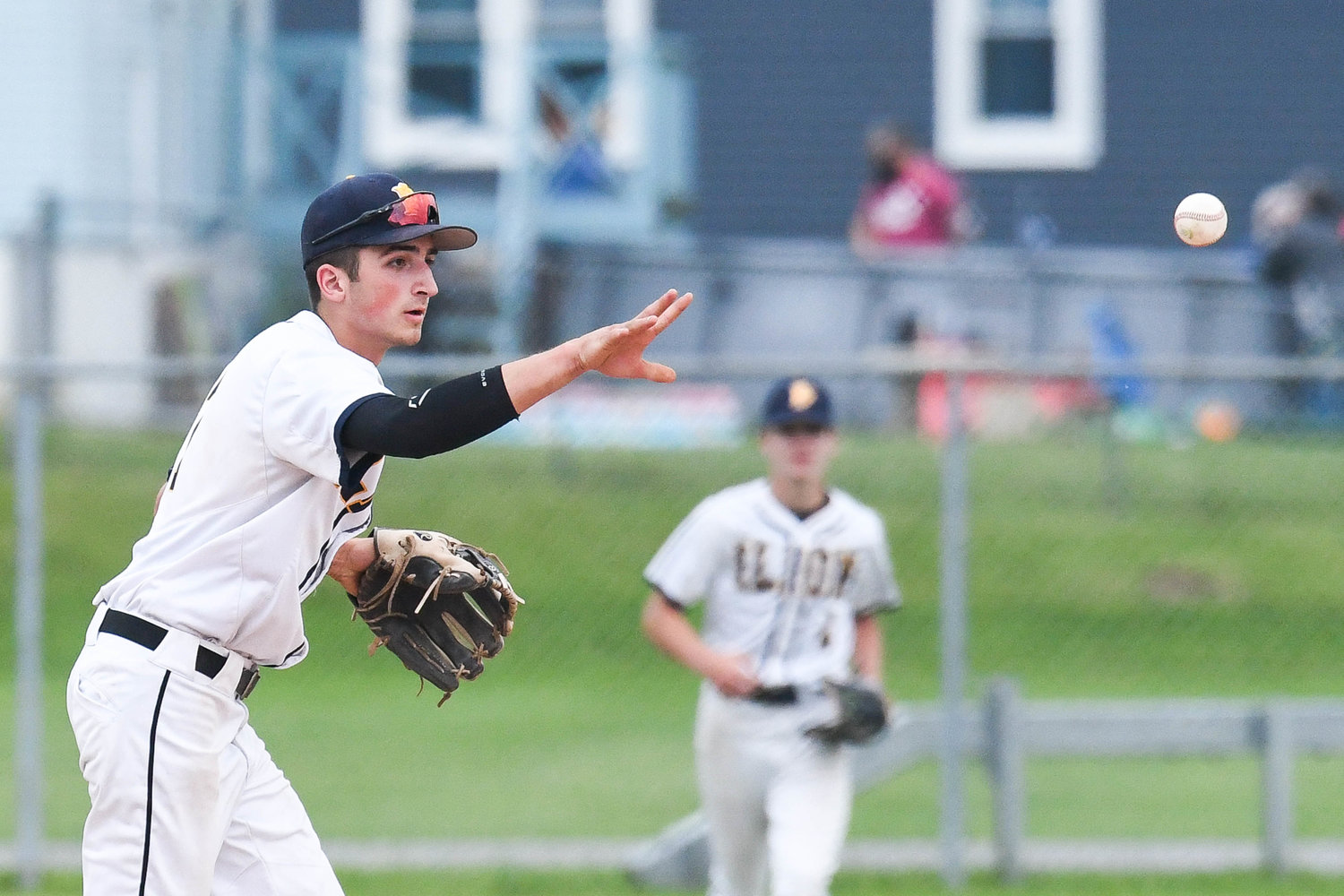 Ilion Post's Alan Meszler (7) tosses the ball to second base against Utica Post 229 on Wednesday.
(Sentinel photo by Alex Cooper) 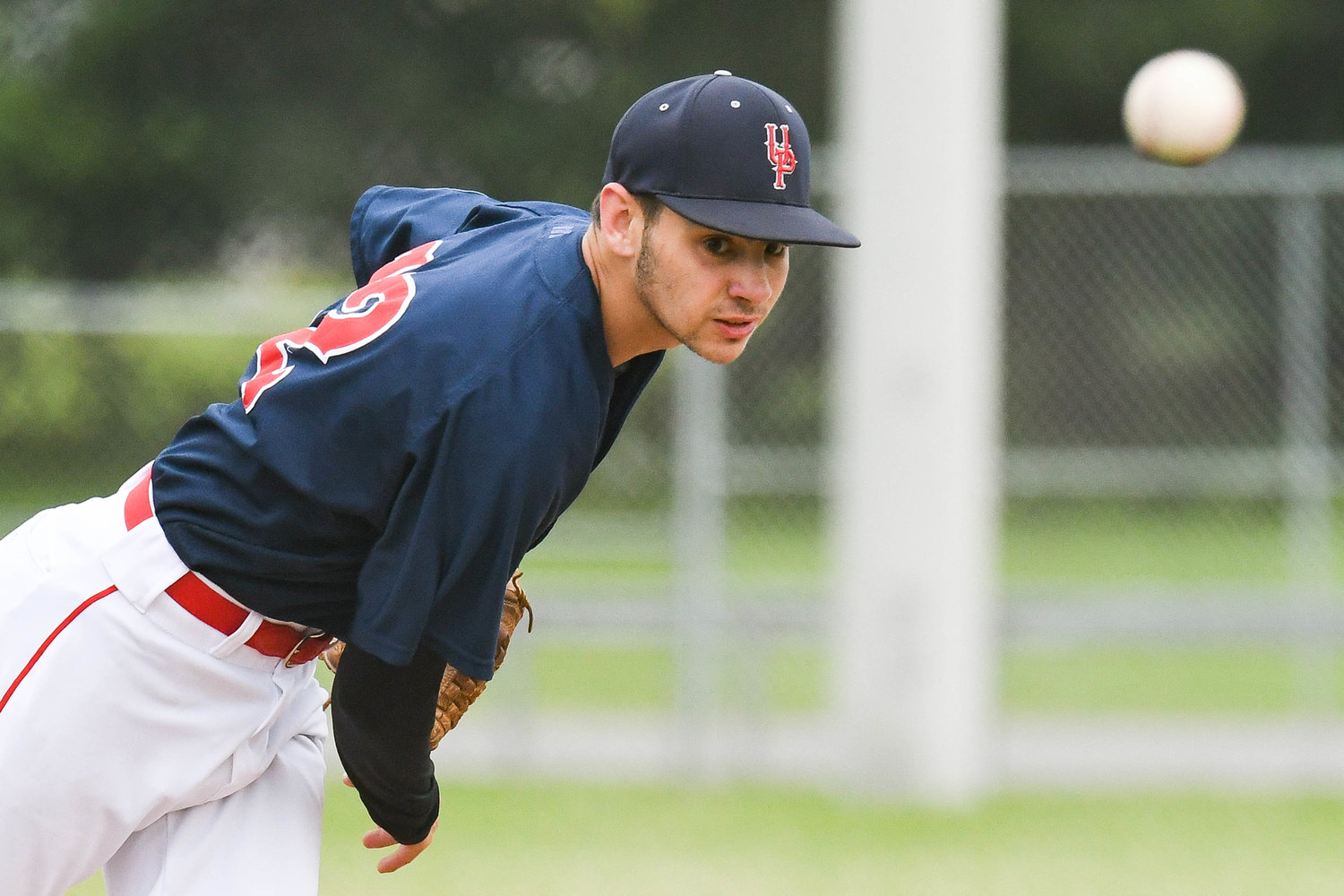 Joey Gentile’s sacrifice fly with one out in the top of the eighth inning put Utica Post ahead for good Wednesday and Martin Learnard scored on a bases loaded walk as part of a 12-10 District V American Legion baseball victory over Ilion Post at Central Valley Academy.

Ilion rallied to tie the game at 10 with four runs in the bottom of the sixth inning. As part of the rally, Alan Meszler had an RBI single, Tanner Warren scored on a Chase Regan sac fly, Nick Greene scores on wild pitch with one out. Meszler scored on a sac fly to cap the rally.

The teams combined for 21 hits and seven errors.

Ty Bonner led Utica, going 4-for-4 with a walk, two RBI and three runs. Todd Abraham went 0-for-2 with a walk, but had three RBI. Gentile was for 2-for-4 with three RBI and a run. He also added a walk. Mike DeFazio had two RBI to go with two walks. Utica totaled nine walks.

Ilion Post — which had eight hits — was helped by Ayden Miner and Regan, who each had two RBI. Brayton Langdon and Jeff DeSarro each had an RBI.

Ilion led 6-5 after four innings but Utica grabbed a one-run lead in the top of the fifth on a two-run double by Gentile with two outs.

Utica was scheduled to play Whitestown Post on Thursday at Murnane Field. Statistics were not available at press time.

Ilion (5-3 overall) is scheduled to take on Oriskany Post at 6 p.m. Sunday at DeLutis Field 2 in Rome.

Jacob Premo and Jack Lawless each had two RBI as Smith Post cruised to a 9-2 win over Adrean Post on Wednesday at RFA field.

Smith — which improved to 6-6 overall — totaled 11 hits in the victory.

Damon Campanaro finished 3-for-3 with three runs, while also earning the win on the mound with a complete game effort. His line was not provided.

Marco Macri and Derek Holmes each had an RBI for Smith.

Smith was set to play Thursday at New Hartford. Statistics were not available at press time.

Adrean was scheduled to take on Oriskany Post on Thursday at DeLutis Field.

Statistics were not available at press time.

Moran Post collected four hits in the bottom of the ninth to earn a 1-0 win over previously undefeated Whitestown Post on Wednesday at Camden Yards.

Each of the hits were against Whitestown pitcher Colin White, who took his first loss of the season. Kody Czternastek totaled nine strikeouts and allowed seven hits over 8 1/3 innings while taking the no decision.

No individual statistics were available for Moran Post, which is 3-3. The team totaled 11 hits.

Whitestown (6-1 overall) was shutout for the first time this season. The team has scored nine or more runs four times this season.

Ty Montrose was 2-for-4 for Whitestown, which had five hits. Brian Zbytniewski had a double and a stolen base.