The city of Utica released a draft of the Utica Housing Study, an extensive analysis of the city’s housing market... 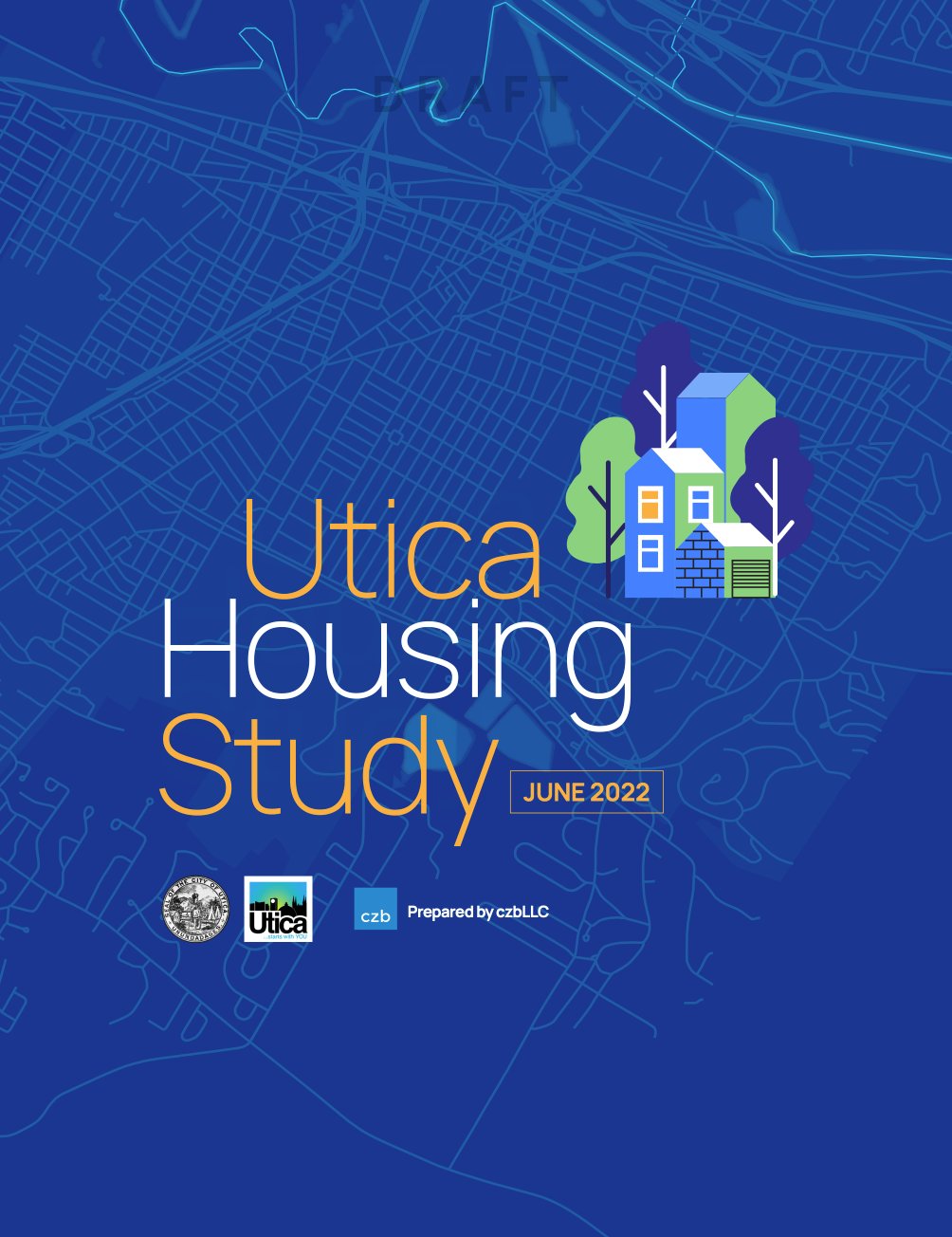 UTICA — The city of Utica released a draft of the Utica Housing Study, an extensive analysis of the city’s housing market that also provides potential opportunities to address the needs of the community.

The study was brought on by the Utica Prosperity Initiative as it entered its second phase to continue investing resources and funding to improve the city. The approximately $20 million allocated to the initiative’s second phase utilizes funds from community investments and the American Rescue Plan Act.

The Utica Housing Study, conducted between March and June 2022 by national planning and housing consultant czbLLC, is divided into three parts:

The study goes in-depth on a variety of subjects, such as the needs and demands of the local housing market, what Utica can do to address concerns, what opportunities the city can take and how the city can establish a more competitive housing market.

“Population growth, a proliferation of new downtown housing, and persistent affordability problems are among the housing trends and issues that most Uticans are aware of from the past decade or two,” the study says.

“The consequences of population loss and the resulting drop in demand for housing — on vacancy rates, property conditions, home values, reinvestment levels, and Utica’s tax base — were, and continue to be, dramatic,” the study reports. “Now, for two consecutive Census periods, the city’s population has grown. Not only has it grown, it has grown at a faster pace (7.6%) than New York State as a whole, faster than any other city in upstate New York with more than 40,000 people — and it has grown while the remainder of the county has declined.”

“But the impact of population growth on the Utica housing market is not clear-cut,” the study adds. “For one thing, the total number of households in Utica has actually declined by more than 10% since 2000 due, in part, to growth in household sizes and an expansion of large households—a trend that runs counter to the continued shrinking of households in the rest of the U.S. This can be tied directly to Utica’s status as a major refugee family resettlement center—by far the largest factor in the city’s population growth.”

The report adds that there is a significant gap in housing availability and options based on income. Households that make $35,000 or less face few options for quality, affordable housing while those households that earn $50,000 or more have a fairly wide variety of housing options available, the study says. Those between $35,000 and $50,000 may struggle to find quality housing but have more options and require less assistance than those earning $35,000 or less, the study adds. Nearly 30% of Utica’s households fall below the $35,000 earnings threshold with 26% of households falling below the $20,000 earnings mark. According to the study, just over 40% of households in the city are in the $50,000 or higher earnings category.

The income differences are mirrored in the types and availability of housing available — with neighborhoods having a higher concentration of families in poverty having fewer options and housing in more affluent neighborhoods providing more desired options for residents.

“Like poverty, housing needs in Utica are highly concentrated and far outstrip current interventions or resources,” the study adds.

“Needs and challenges in Utica’s housing market far outweigh the resources available to address them all. This much is clear from analysis performed for the Utica Housing Study,” the report says.

“It is also clear that Utica has real strengths and momentum to leverage today—more than it did 10 or 20 years ago. A downtown that is increasingly vibrant and populated, parks that are receiving an infusion of new resources, new investments in health care, major strides in regional economic development, and growing recognition of the city’s diversity and international perspective—all are assets that should have a positive and lasting impact on housing conditions and opportunities in Utica,” the study adds. “Making the most of these strengths and their potential impact on housing while working under Utica’s financial and capacity constraints will require resourcefulness. That means doing as much as possible—and having the biggest possible impact—with each dollar and each ounce of civic energy.”

The study encourages a coordinated effort on housing that not only incorporates housing but other amenities and factors to improve neighborhoods and sections of the city, including:

“It’s been quite some time since the city had anybody look at our current housing needs at all levels of income for all demographic groups,” Crossman said. “We wanted to get a sense of where we are today, what were some of the trends in the last 20 years and what we can think about doing in the future to build off of the economic development that’s been happening in Utica.”

The study presents many opportunities that the city can take to become more competitive, such as improving the infrastructure to revitalize the neighborhoods, investing and preserving affordable housing units.

The study provides examples for both housing and neighborhood development, such as:

Among the options that could studied and potentially pursued, the study says, is to demolish the St. Elizabeth Medical Center and to redevelop the land for rental units and single family housing. Use of the St. Elizabeth’s Medical Center is expected to phase out with the completion of the Wynn Hospital in downtown Utica. As of today, Mohawk Valley Health System has not made an official decision regarding the fate of the current area hospitals.

The city is encouraging its residents to review the study and to submit any questions or feedback. The form to submit public input will be open until June 30. Once the public input period closes and the final draft is finished, the city will determine how they will utilize the study.

To review the Utica Housing Study and to provide any questions or feedback, visit: uticahousingstudy.org