Utica honors those lost on 9/11 in remembrance ceremony

Almost 21 years have passed since the tragic events of 9/11 and the lives of those lost during the terrorist attacks continue to be honored.

Utica honors those lost on 9/11 in remembrance ceremony 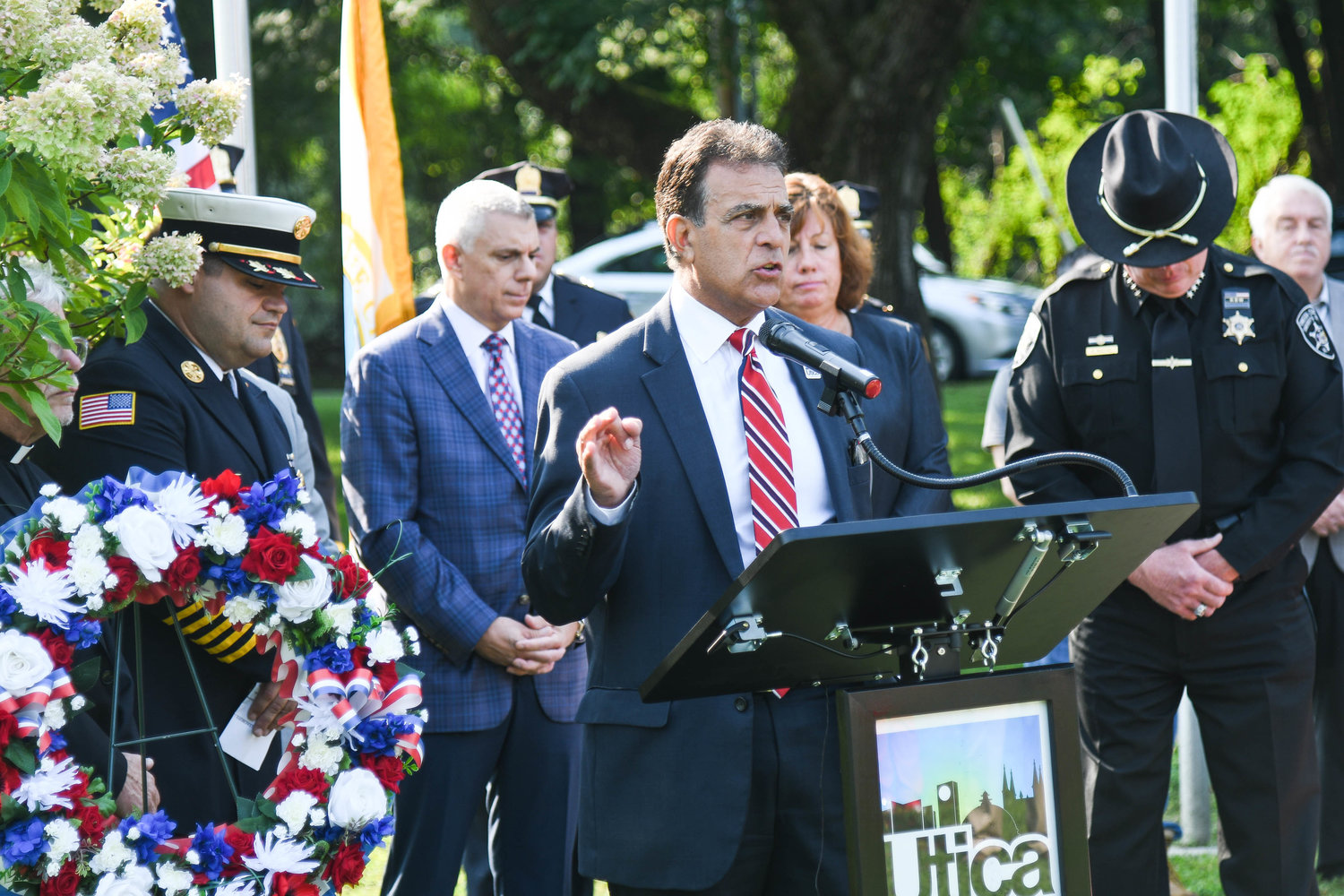 Utica Mayor Robert Palmieri speaks during the annual 9/11 Remembrance Ceremony on Friday morning at the 9/11 Memorial in Utica.
(Sentinel photo by Alex Cooper) 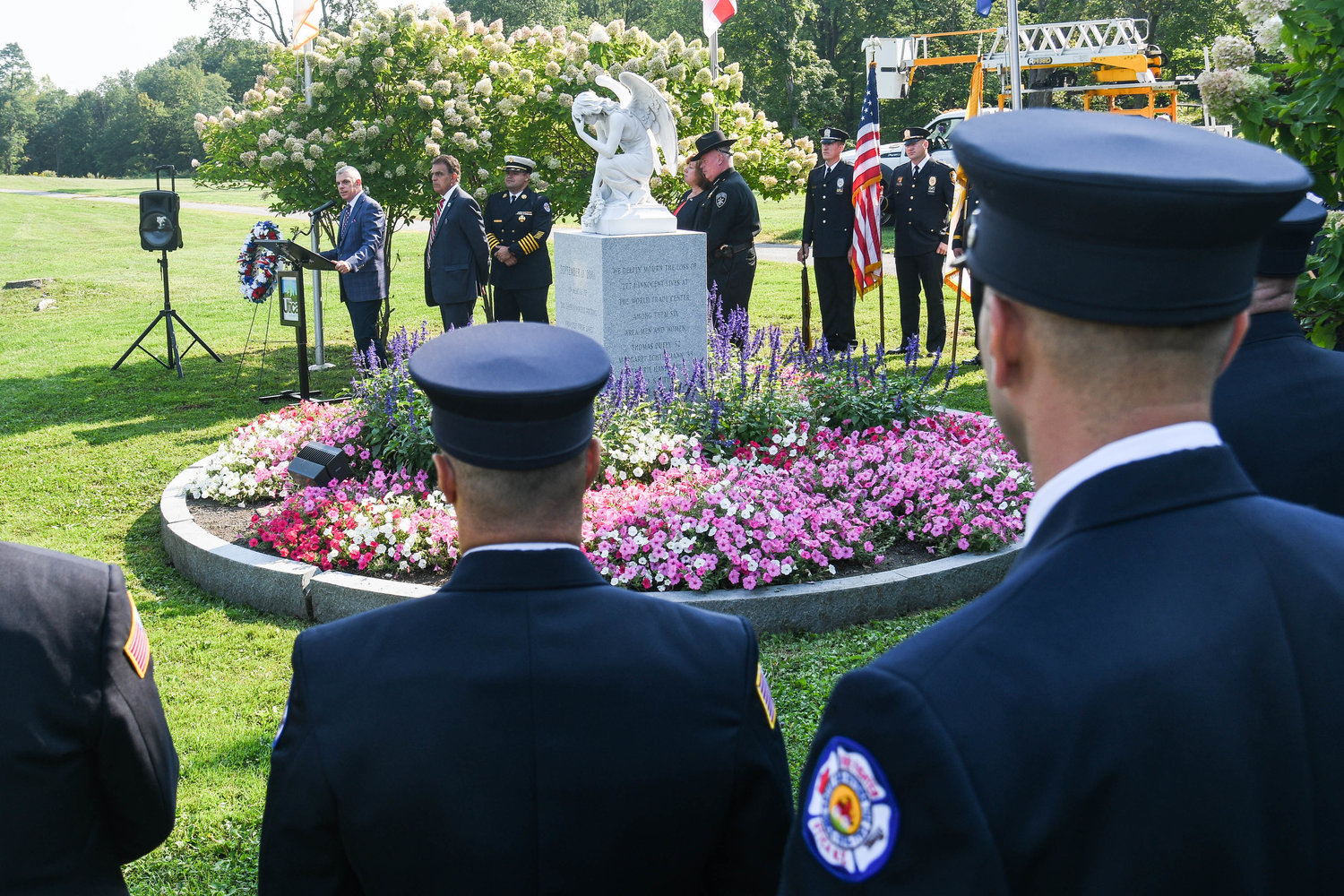 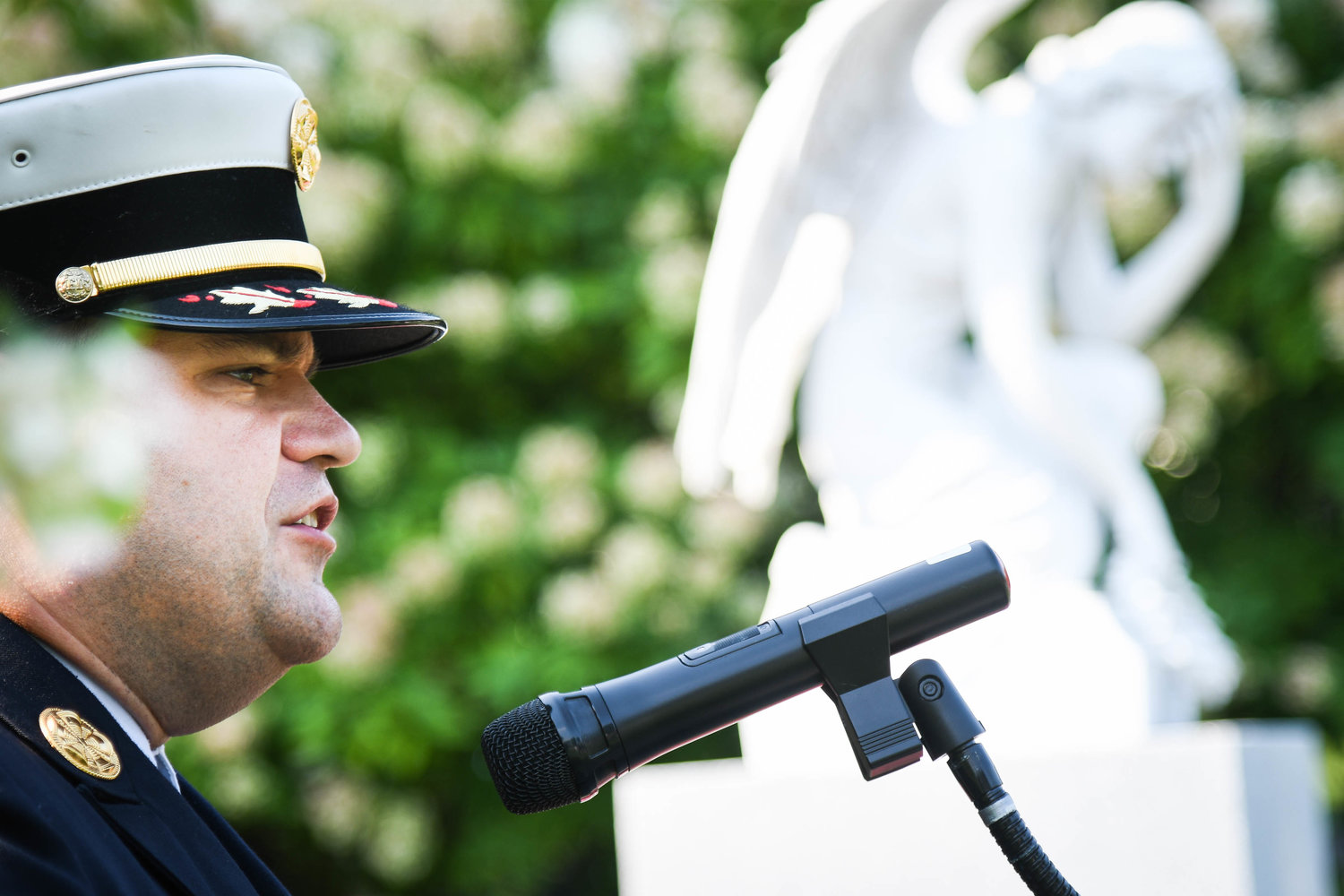 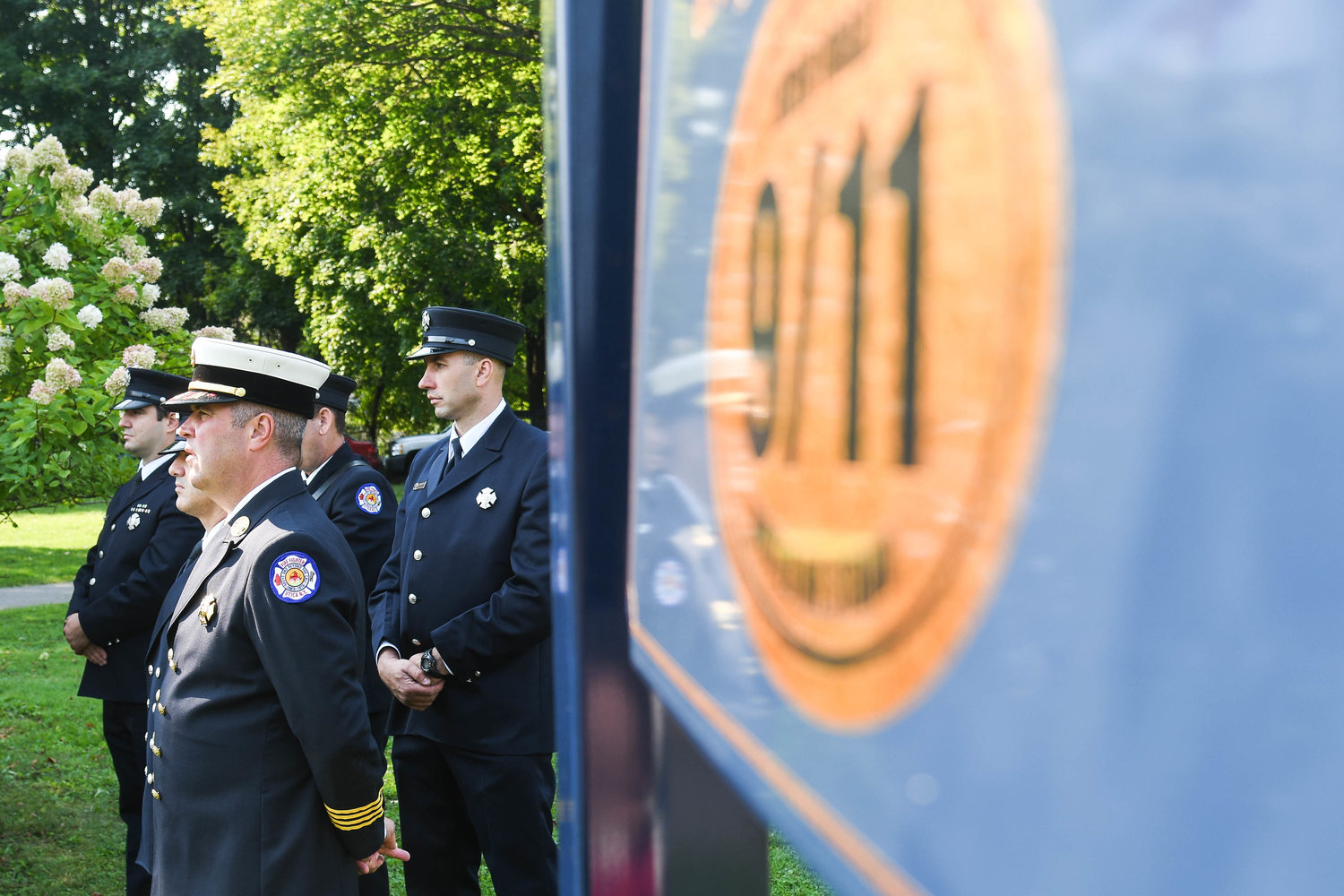 Utica firefighters attend the annual 9/11 Remembrance Ceremony on Friday morning at the 9/11 Memorial in Utica.
(Sentinel photo by Alex Cooper) 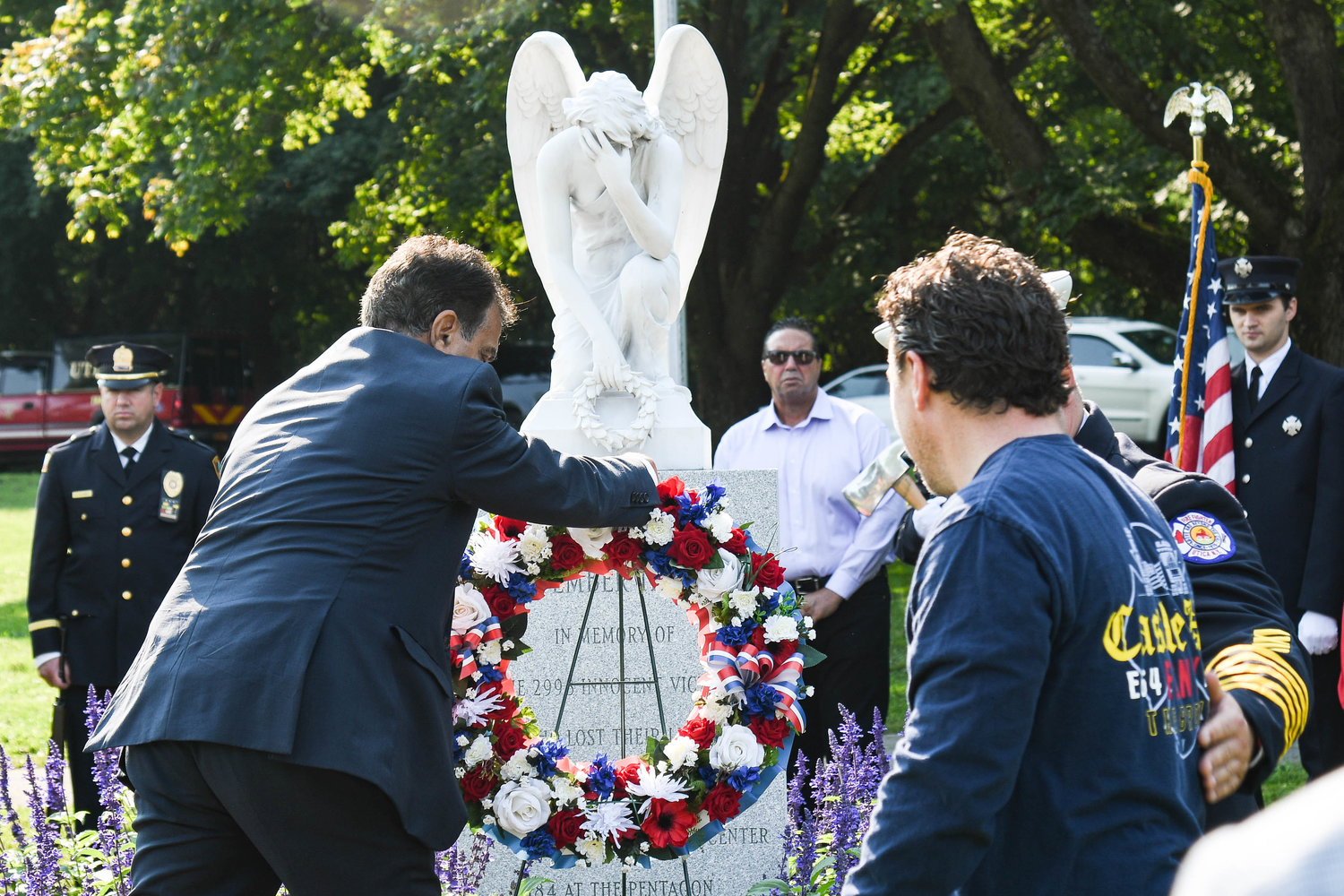 A wreath is placed during the annual 9/11 Remembrance Ceremony on Friday morning at the 9/11 Memorial in Utica.
(Sentinel photo by Alex Cooper)
Previous Next
Posted Saturday, September 10, 2022 10:30 am
Thomas Caputo
Staff writer
email

UTICA — Almost 21 years have passed since the tragic events of 9/11 and the lives of those lost during the terrorist attacks continue to be honored.

Closing out the weekend before the upcoming 21st anniversary, elected officials and first responders came together for the traditional remembrance ceremony at Utica’s 9/11 memorial, located at the intersection of Memorial Parkway and Sherman Drive.

Noting the decades that have passed, Utica Mayor Robert Palmieri mentioned that there is now a generation of people who were born after 9/11 and he conveyed the importance of remembering our country’s history.

“I think it’s really incumbent upon us that we never lose sight of [9/11] and we never forget the pain, the anguish that we all have gone through and for all the lives that have been lost,” Palmieri said.

While the United States continues to experience significant political divisions, Palmieri brought up how tragedies like 9/11 have unified Americans in the past.

“As we move forward and we say we shall never forget, one thing that 9/11 taught us is we all came together as a nation,” the mayor added. “We dropped the party lines, we dropped all of our anger against each other. It didn’t make a difference, if nothing else, we have learned as a country is to come together. Let’s not wait for another tragedy of this magnitude to come together as a country. Let us use this, as what happened in the past, as we plan our future.”

“We need to keep that indomitable spirit alive in the face of our adversaries and the challenges that we face here domestically,” said Sen. Joseph A. Griffo, R-47, Rome. “On this day, not only does this give us an opportunity and a chance to reflect, to remember and also to memorialize all those who lost their lives and those who served this great nation as first responders and in our military, but also to rekindle that spirit so that we continue to remain united.”

Closing out the remembrance ceremony, Palmieri was joined by Utica Fire Chief Scott Ingersoll and Patrick Carey, a first responder with the New York City Fire Department during 9/11, as they placed a wreath at the monument in commemoration of the lives lost.