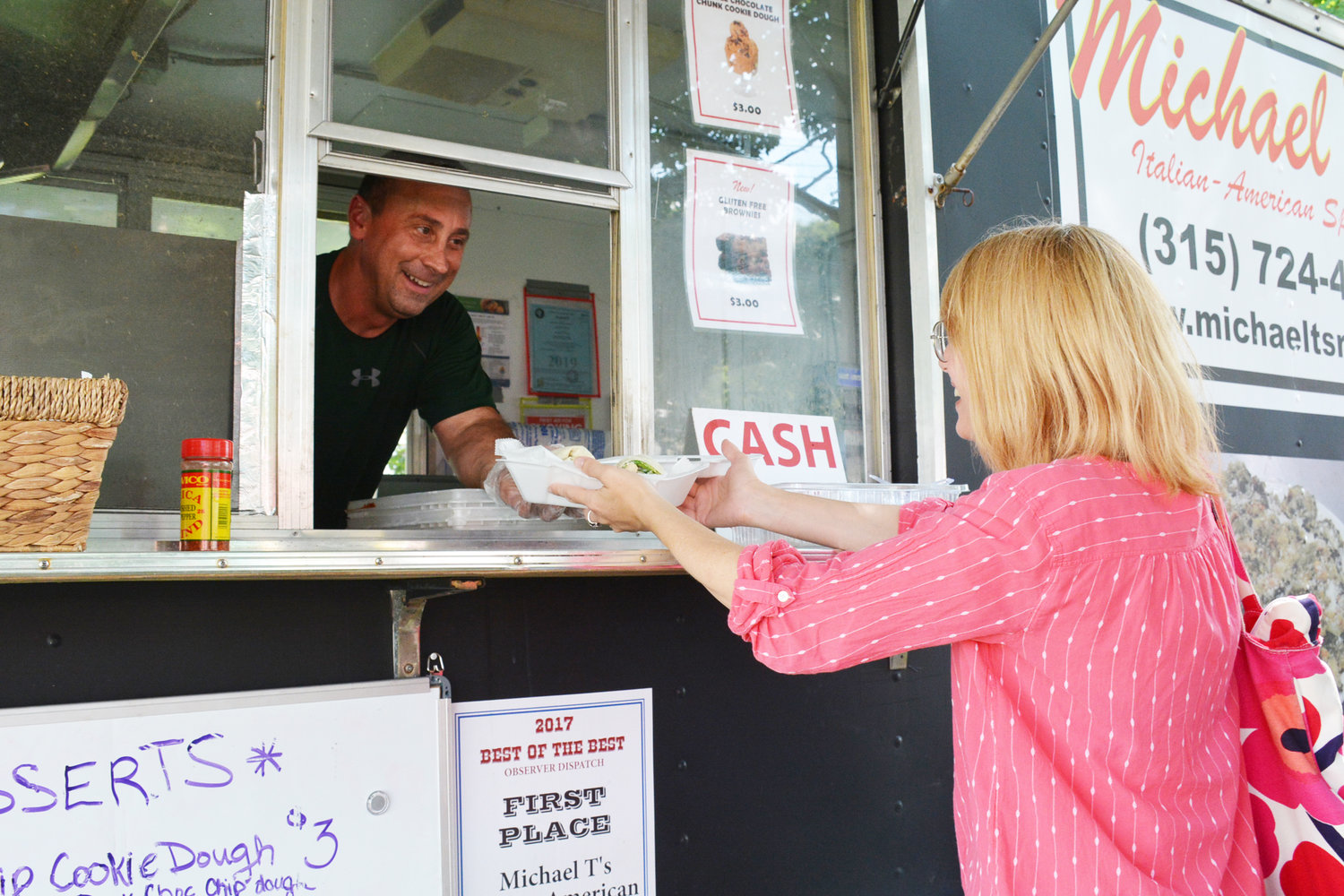 GREENS TO GO — Michael Trunfio, owner of Michael T’s food truck hands customer Nicolle Child an order at the Farmer’s Market on the Clinton Green, Thursday, Aug. 8. The Clinton resident has been operating the food truck in the village market for the past three years, but said this is his busiest year to date.
(Clinton Record photo by Thomas M. Baker) 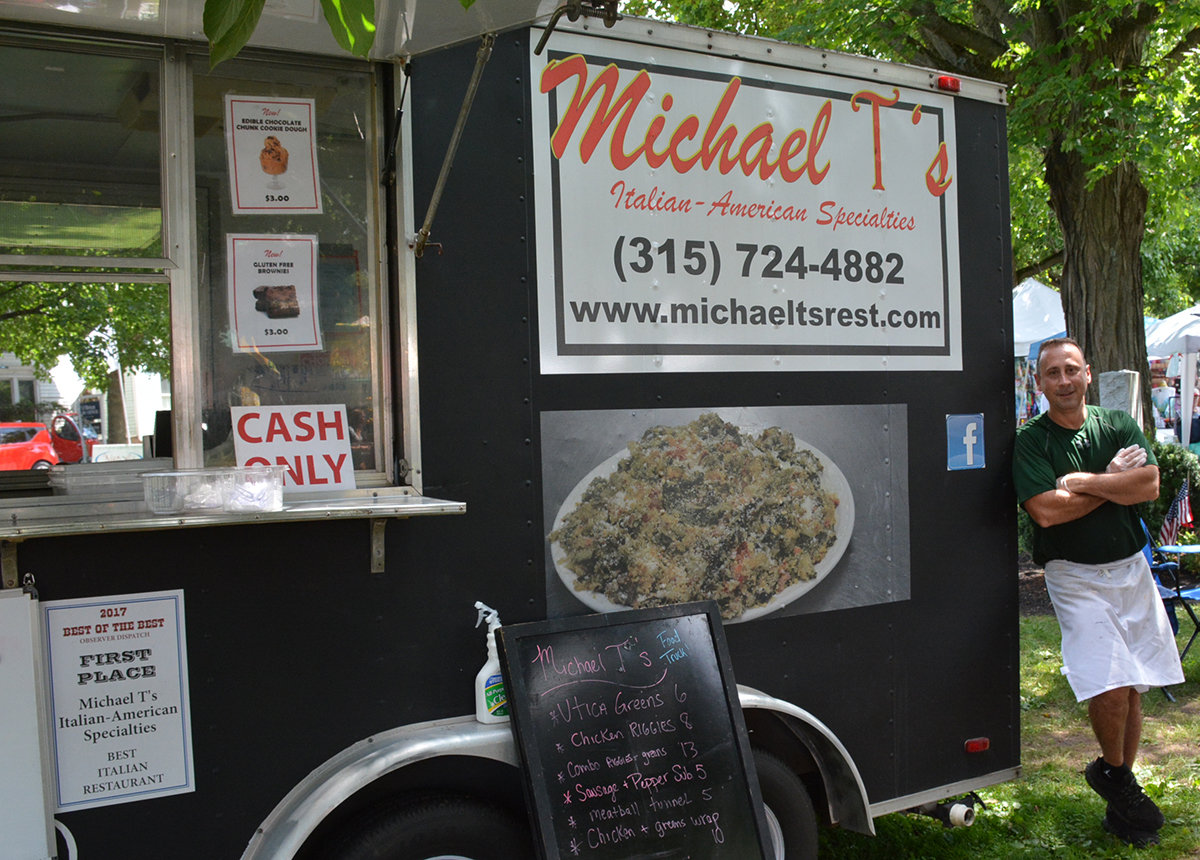 A ROLLING RESTAURANT — Known to his friends as Mike, or Mickey, Trunfio and his wife, Karen have a popular eatery at 8390 Seneca Turnpike in New Hartford, but the food truck gives them a chance to bring their menu to those who live in all parts of Utica. The Clinton residents serve North and East Utica, plus the suburbs at different area events.
(Clinton Record photo by Thomas M. Baker)
Previous Next
Posted Thursday, August 15, 2019 12:00 pm
Thomas M. Baker
Staff writer
email

CLINTON — Food trucks, traditionally, have a reputation for serving hot dogs, hamburgers, french fries, coffee and doughnuts. But Michael and Karen Trunfio of Clinton, owners of Michael T’s Italian-American Specialties in New Hartford, are upgrading their menu and bringing it to the Clinton Farmers Market, and for a reason.

“I think this is the best market around,” Trunfio said. “Nice people, nice venue, nice atmosphere, perfect location, the whole nine yards. And my kids go to school in Clinton so I get to keep an eye on them too.”

The menu includes, sausage and pepper subs, chicken riggies, meatball tunnels, chicken cesar wrap sandwiches, ravioli and a local favorite, Utica greens. Michael T’s was awarded “Best Italian-American Restaurant” in Utica by the Observer-Dispatch best of the best poll in 2017, “Best Caterer” in 2018 and came in the top two for best greens in 2019.

But, maybe not surprising when you learn Trunfio comes from a family with a long line of men in the kitchen, his father and grandfather before him were both successful restauranteurs.

“My grandfather had a restaurant in East Utica named the Albany Square Restaurant from the turn of the century to the 1950s. My father started his own kitchen at the Roselawn restaurant on Main Street in New York Mills,” Trunfio explained.

“He leased the building from the F.X. Matt family. Then later he opened Trunfio’s on Commercial Drive with his brother, Dan Trunfio, lots of pizza came out of that place. In 1983 he opened Michael T’s, where we are now and I took it over in 1996 when he retired.”

Trunfio said the old restaurant building on Commercial Drive is still there, across from Symeon’s restaurant, albeit the car dealer it is now added on to it and it looks nothing like it did when his family name was over the door in the 1970’s.

Trunfio graduated from New York Mills Jr. Sr. High School and attended Utica College where he graduated with a degree in Business Administration in 1987. He then embarked on a 26-year career with the United States Postal Service rising to the position of Postmaster in the Deansboro office. When he retired a few years ago he started thinking about ways to supplement his income with the restaurant and the food truck idea was born.

“I was driving by one, one day and the thought just occurred to me out of the blue,” Trunfio said.

The customers on the Green must be glad he did based on the comments they made about the food.

Nancy Laino of Utica said it was super.

Laino said she had many favorites off the Michael T’s menu.

“I guess I like his fish the best,’” she said. “He has a variety of fish dinners that are wonderful. Today I got the greens.”

Trunfio said he keeps his menu easy and straightforward on the truck.

“This is a different setting than the restaurant and it’s important to keep the line moving, so I keep the menu on the truck simple,” he said. “Nobody appreciates having to wait on line especially in the summer sun. Nobody waits in line- in and out.”

People from out of town were really very impressed as well. People like Noelle Child and her twin teenage daughters Gweneth and Phoebe from Yardley, Pa. who were in the village on a break from interviews with Hamilton College admission advisors.

“The meatball tunnel was very good,” she said. It was a little messy, but still very good quality meatballs. I liked it.”

Child is not the only one who likes the wraps.

“That’s my most popular seller now, the chicken caesar wraps,” Trunfio said. “Also, I sell a lot of combinations- greens and chicken riggies.”

Trunfio said the wraps go best in the summer, but once fall hits he’ll change up his menu as the weather gets cooler. The market doesn’t end until first week in October.

“I’ll do pumpkin ravolis,” he said. “Plus, I’ll do some soups, and maybe some pasta and beans, something like that.”

Trunfio said that even though the market ends in October he’ll still be around the Clinton area. And he’s always open to anyone or any event he’s invited to.

“The high school has a home coming event in late September,” he said. “There’s a bunch of food trucks that benefit the Clinton Booster Association, so I’ll be part of that.”