The Utica Comets have been helped by solid goaltending early in the 2022-23 season. Prospects Nico Daws and Akira Schmid have both had good outings with the Comets while alternating starts through … 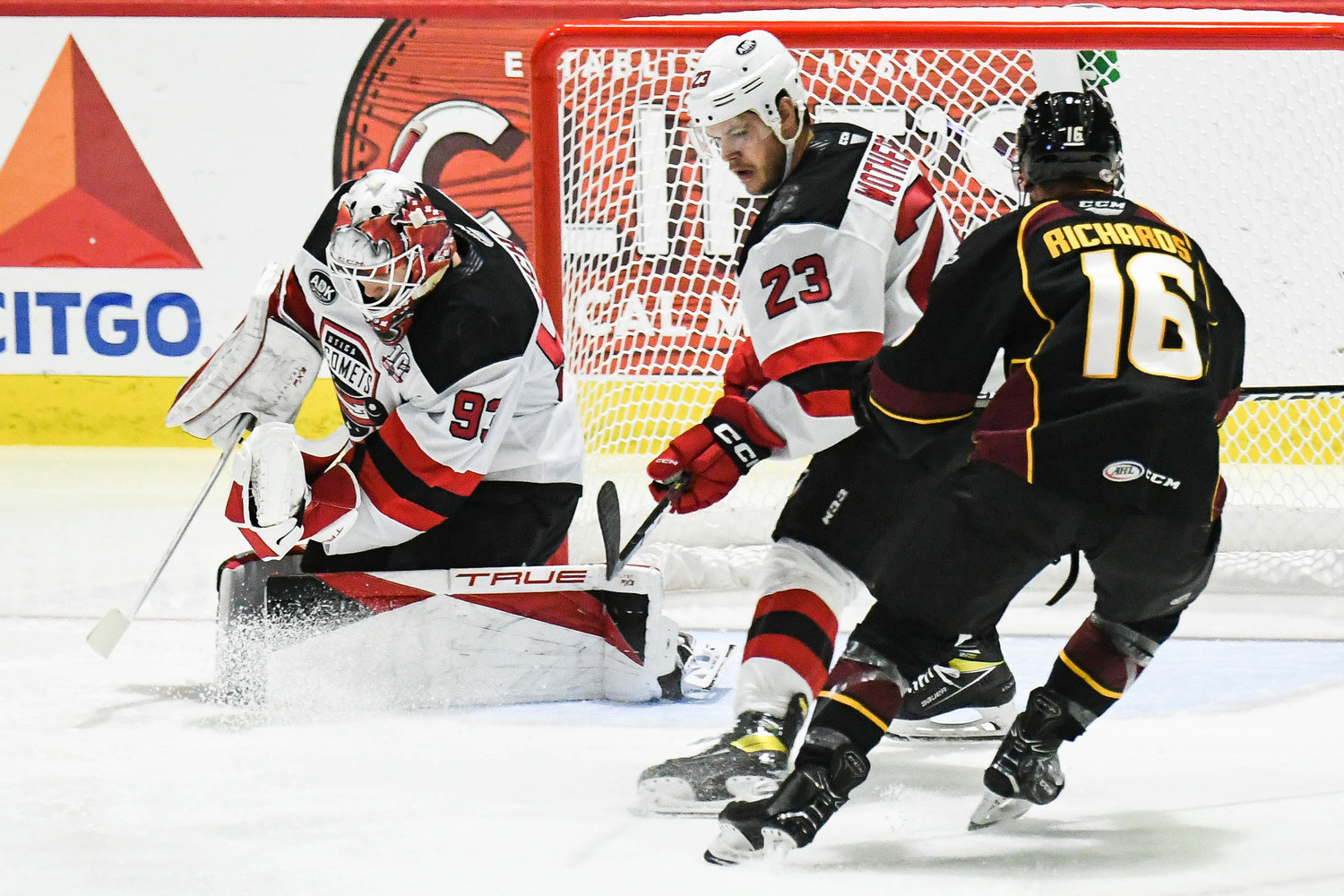 Comets goalie Akira Schmid makes a save during a recent game. He has been part of the Utica Comets’ tandem in early games this season.
(Sentinel photo by Alex Cooper)
Posted Saturday, November 5, 2022 10:58 am
Ben Birnell
Sports writer
email / twitter

The Utica Comets have been helped by solid goaltending early in the 2022-23 season.

Prospects Nico Daws and Akira Schmid have both had good outings with the Comets while alternating starts through the team’s opening six games of the season.

Entering Friday’s game opening a home-and-home series against Rochester, the 21-year-old Daws — the New Jersey Devils’ third-round draft pick in 2020 — had a 1.94 goals-against average and a 0.934 save percentage. However, he had an 0-2-0 record.

The 22-year-old Schmid — New Jersey’s fifth round pick in 2018 — had a 1.97 GAA with a .918 save percentage to go along with 2-1-1 record following Utica’s shootout loss to the Providence Bruins on Wednesday.

Utica Comets coach Kevin Dineen had praised the play of both goaltenders through their early starts to this season.

Both have started this season as the Devils have used a tandem of Mackenzie Blackwood and Vitek Vanecek. Both Daws and Schmid spent time in the NHL last season after injury struggles with the parent club.

There was a new wrinkle Friday: The Comets announced before Friday’s game that Brandon Kasel — who spent time with the team last season on a tryout — had been signed to Utica.

Daws started in goal for the Comets on Friday night, with Kasel backing him up. It was unclear what Schmid’s status Friday as the Devils hadn't officially announced any call-up. New Jersey finally announced Saturday Schmid had been called up.

The Comets’ change at goalie comes after Blackwood left the the Devils’ win over the Edmonton Oilers on Thursday. The goaltender made a save and fell awkwardly during an Oilers power play in the second period.

The team said Blackwood was absent from practice in Calgary with Vanecek and Jonathan Bernier — who started the season on long-term injury reserve — in net for the Devils. The Devils did not update Blackwood's status on Firday.

The Comets also have Isaac Poulter and Mareks Mitens signed to AHL contracts, though ECHL Adirondack was playing games Friday and Saturday in Quebec.

Poulter is a rookie, who has a 3.72 goals-against average with an .876 save percentage. He's 0-2-1 this season after making 40 saves for Adirondack in a 4-3 overtime loss on Friday night to the Trois-Rivières Lions.

Mitens — who played 17 games with Utica last season and posted a 3.31 goals-against average — was recently listed on ECHL reserve.

WHAT TO KNOW: Rochester has lost three of its four road games this season. ... Both teams had 6-5-1-0 records against each other in the regular-season during 2021-22. Rochester claimed a playoff series in five games last spring. ... Standout Jack Quinn, who had 14 points against Utica last season, is up with parent Buffalo Sabres. ... Comets defenseman Reilly Walsh is the Comets’ top returning scorer against Rochester last season. He had two goals and 10 assists in 11 games. .... Comets forward Jack Dugan, who is in his third season, is a Rochester native. The former McQuaid Jesuit standout played with AHL Henderson the last two season and didn’t play against Rochester until this season.

Utica Comets give up lead at Rochester