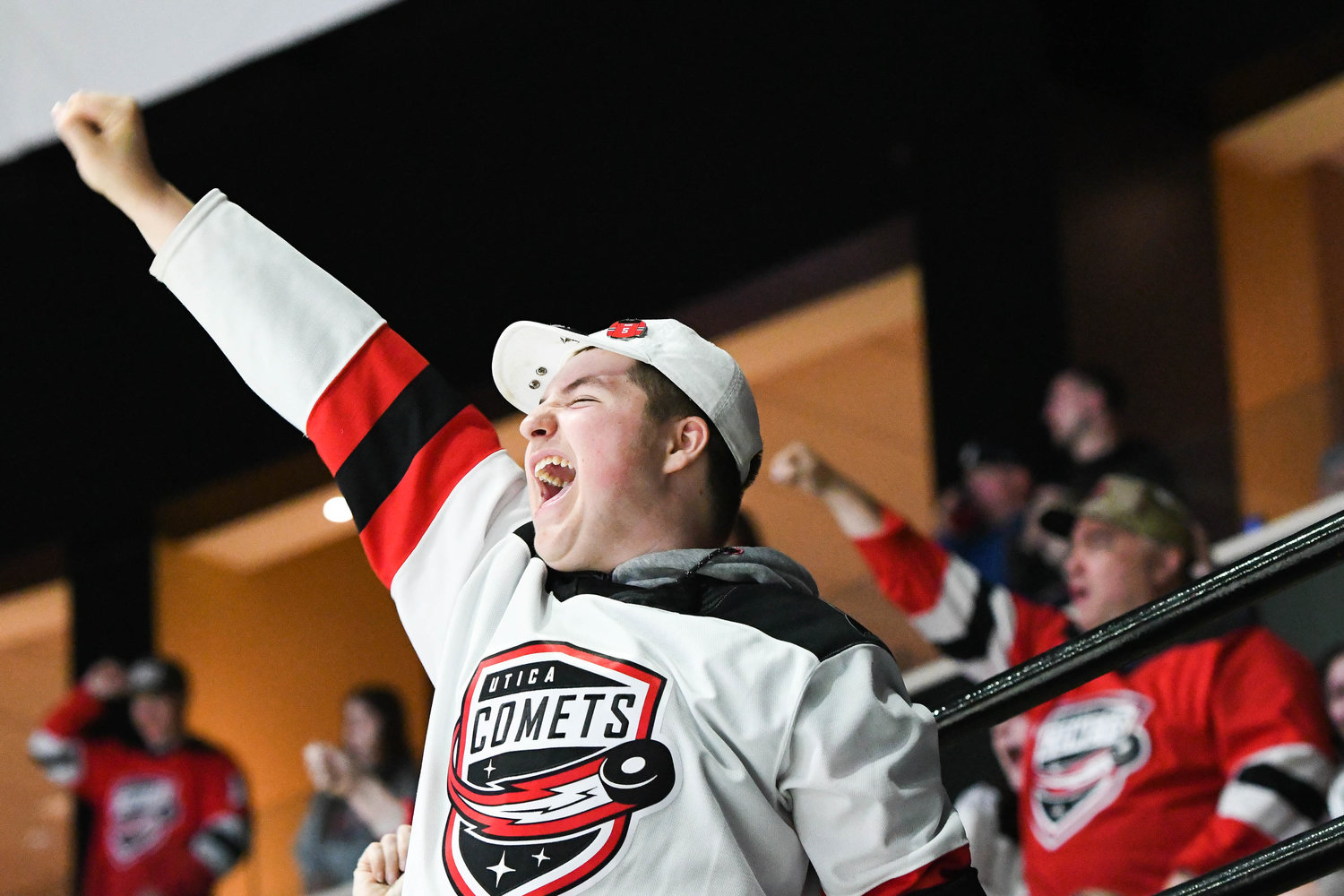 Patrick Klein celebrates a Utica Comets goal during a recent game. The Comets -- who claimed the North Division championship and had the Eastern Conference’s best record -- are set to open their North Division Semifinals on Tuesday in Utica. They will play the winner of best-of-three series between Rochester and Belleville.
(Sentinel photo by Alex Cooper)
Posted Monday, May 2, 2022 8:51 pm
Ben Birnell
Sports writer
email / twitter

The regular-season had yet to end and the Utica Comets were already looking forward to their playoff games.

Well, the regular-season is over – Utica closed the schedule with a 4-2 win Saturday at Providence with help from two goals from Chase De Leo – and the Comets finished with a 43-20-8-1 overall record and 0.660 points percentage. The team had already locked up top spot in the North Division as well as the best record in the Eastern Conference, giving the team home-ice advantage through the conference rounds should they advance.

Now, the record-setting Comets – in addition to that 13-0 start to the season, the team’s 246 goals shattered the previous mark – will have to wait just a little bit for their playoff series to begin.

As the top seed in the North Division, Utica earned a bye into the best-of-five division semifinals.

“We’re all really, really fired up for this playoff run,” said defenseman Reilly Walsh, who scored the game-winner in overtime April 22 to close the home portion of the schedule. “We saw some of the videos about the white-outs and the crowd (from past playoffs). We couldn’t be more excited about what the fans are going to bring for us this postseason.”

Walsh said forward Patrick McGrath has been talking about the white-outs, which are set to return for the home playoff games. The team is giving out white T-shirts at the first home playoff game.

The playoff appearance is welcomed for the players after playing home games during a shortened 2021 season at parent New Jersey’s practice rink in Newark.

“(The fans) make a huge difference,” said Walsh, who played 33 AHL games in 2021. “To have the atmosphere like this makes it such an advantage and helps us with energy when we’re tired. I think they brought it all year.”

While the Comets have to wait to play again, fans do have an idea when the team will hit the ice again:

Game 3’s date is to be determined as is Game 4, if it is necessary.

Game 5, if necessary, would be Thursday, May 19 in Utica.

Utica will take on the winner of a best-of-three series between No. 5 seed Rochester and No. 4. Belleville. Rochester claimed the final spot on the last day of the regular-season Saturday when Toronto lost to Belleville.

No. 2 Syracuse is set to meet No. 3 Laval in the other North semifinals series that is scheduled to begin Friday.

This season will be the fourth overall playoff appearance – and first since 2018 – for Utica since AHL hockey returned to the Mohawk Valley in 2013 as Vancouver’s affiliate.

New Jersey’s AHL affiliate last made a playoff appearance in 2017, losing in the first round.

There were no playoff formats in the Eastern Conference in 2020 or 2021 due to COVID-19 challenges.

With time to prepare, the parent New Jersey Devils helped fortify the Comets’ roster for the postseason. As expected, New Jersey returned defensemen Kevin Bahl, Nikita Okhotiuk and Walsh and forwards Nolan Foote, Alexander Holtz and Fabian Zetterlund to the Comets. All were eligible to return after getting opportunities with the Devils before the regular-season ended.

It is an opportunity to learn the pro level for Chase Stillman, who is the son of longtime NHL forward Cory Stillman.

Chase Stillman is coming off a season in the Ontario Hockey League when he posted 49 points in 59 games with Sudbury and Peterborough.