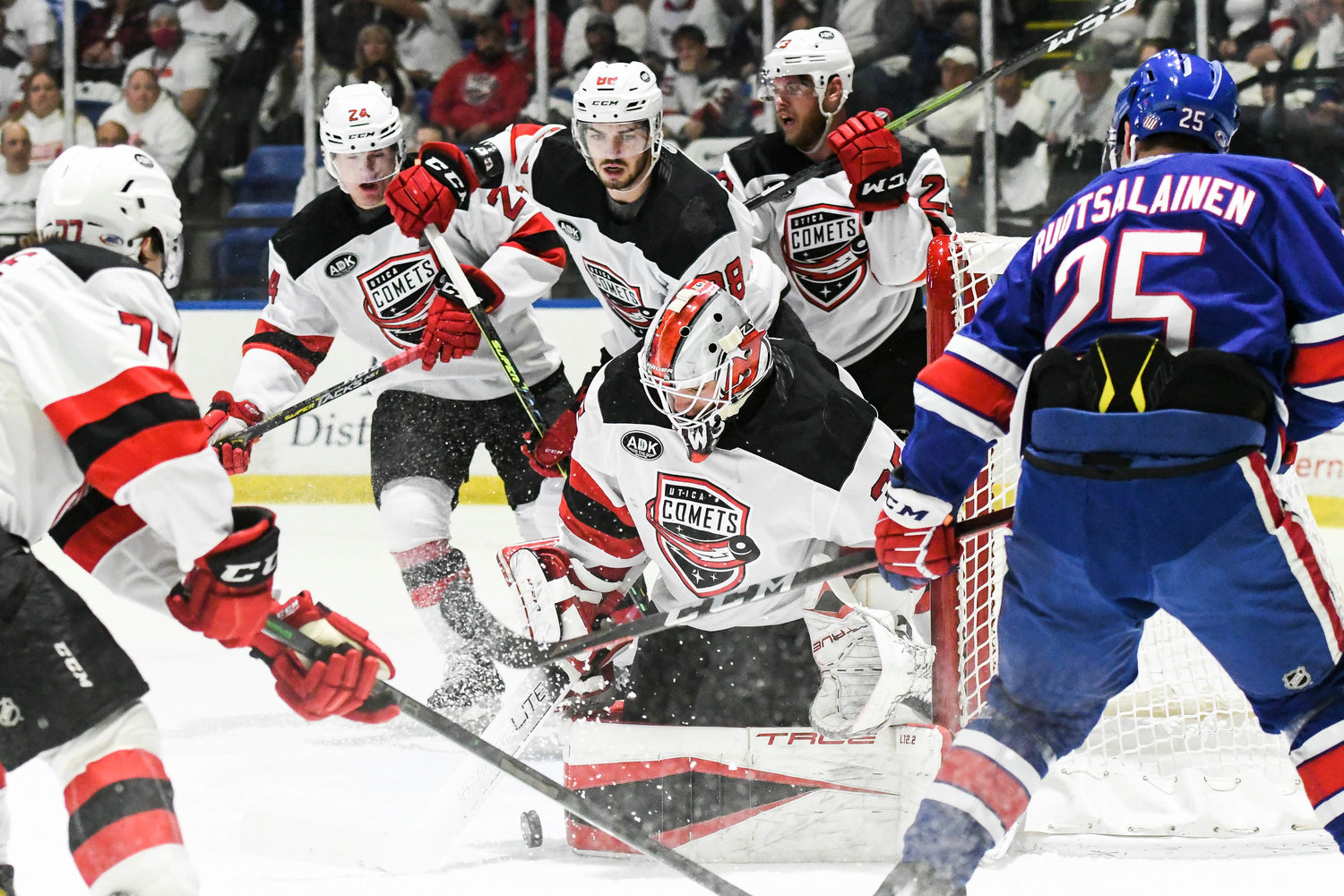 Goaltender Nico Daws and a slew of Utica Comets players try to clear a puck last spring against Rochester. It is possible Daws will play a big role for the Comets again in the 2022-23 season.
(Sentinel photo by Alex Cooper)
Posted Thursday, August 4, 2022 9:10 am
Ben Birnell
Sports writer
email / twitter

The Utica Comets’ exit from the American Hockey League playoffs last spring was earlier than expected – the record 13-0 start stirred lofty expectations – in the team’s first season as the New Jersey Devils’ affiliate.

The second-round loss to Rochester left a feeling that there was more to accomplish for a group that had a mix of prospects and more veteran players, according to Comets General Manager and New Jersey Assistant GM Dan MacKinnon.

There are roster changes to AHL teams after each season – Utica is no exception – though it is likely many of the same players from last season will be back under coach Kevin Dineen. Decisions with regard to players on NHL contracts will get sorted by Devils officials during training camp in September.

“I talked to Kevin Dineen about this: While development is still the No. 1 priority for our NHL prospects, we’re insulated enough with quality guys beyond the leaders that are there,” MacKinnon said in an interview with the Sentinel. “I do think the expectations are high for the group. But, it won’t be easy.”

The Comets’ 10th season is set to begin Oct. 15 at Hershey before Utica’s home opener two days later against Wilkes-Barre/Scranton.

MacKinnon noted the leaders include Ryan Schmelzer – who could miss the first few weeks of the season following shoulder surgery in the spring – as well as Joe Gambardella and steady defensemen Robbie Russo and Tyler Wotherspoon, who was signed to a two-year NHL deal.

“I just think (Wotherspoon) and Robbie Russo are great mentors for those young defensemen” who will be in Utica, MacKinnon said.

Defensive prospects such as Reilly Walsh, Kevin Bahl and Nikita Okhotiuk could vie for a spot with New Jersey. It is possible 2022 second overall NHL draft pick Simon Nemec’s could start with Utica, MacKinnon said.

There’s some added depth for Utica with 14 total players signed to AHL deals, including former Comets in defenseman Dylan Blujus – who will help on the right side – and forward Nolan Stevens. MacKinnon said at least a few of the players on AHL deals will start with ECHL Adirondack. MacKinnon isn’t looking to add any more on AHL deals.

“I think we’re going to be competitive again. I like the depth we have coming in,” MacKinnon said. “I think the overall depth, quality and competitiveness of the team will be equal, if not better, to be honest.”

He did acknowledge things will be different offensively with standouts A.J. Greer and Chase De Leo signing with other organizations. Both were offensive leaders with each accumulating more than 50 points. And, it is possible skilled forwards and friends Alex Holtz and Fabian Zetterlund could snag spots with New Jersey.

Replacing the top four scorers on a team that put up a team-record 246 goals could be tough.

“We have probably lost a little bit of pure offense in straight point-production just with guys moving on,” said MacKinnon, who noted Utica is “14 or 15 deep” players at forward.

“I think some of our young guys saw how tough it can get down the stretch,” said MacKinnon, who believes the Comets’ North Division is the toughest in the AHL. “Down the stretch (last spring), I would have loved some of the younger guys to keep that high level at the beginning of the year. But, that’s part of the learning experience.”

The plan remains for young goaltending prospects Nico Daws and Akira Schmid to get experience with Utica. Both got unexpected NHL experience last season with New Jersey’s goaltending situation in flux.

“In net, we’re going to have way more continuity than we had this past year,” MacKinnon said.

Clinton grad Josh Gagnon returns as the Comets’ video coach after a season away from the role.

He had been the Comets’ video coach since the team begin play in 2013.

“We’re super excited to have him,” MacKinnon said. “I think he’ll be able to work well and support Kevin and understand the intensity and competitiveness that Kevin fosters on a day-to-day basis.”

Eight things to know about the Utica Comets 22-23 schedule 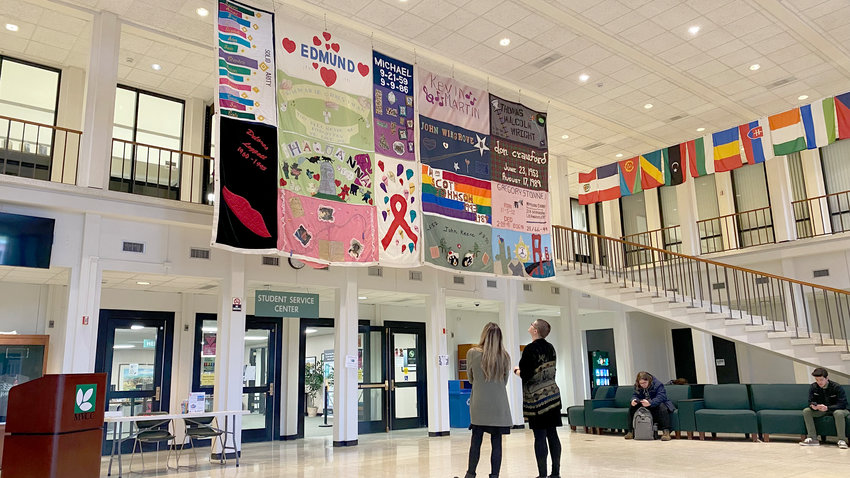