The Utica Comets continue to look for answers against the Syracuse Crunch. 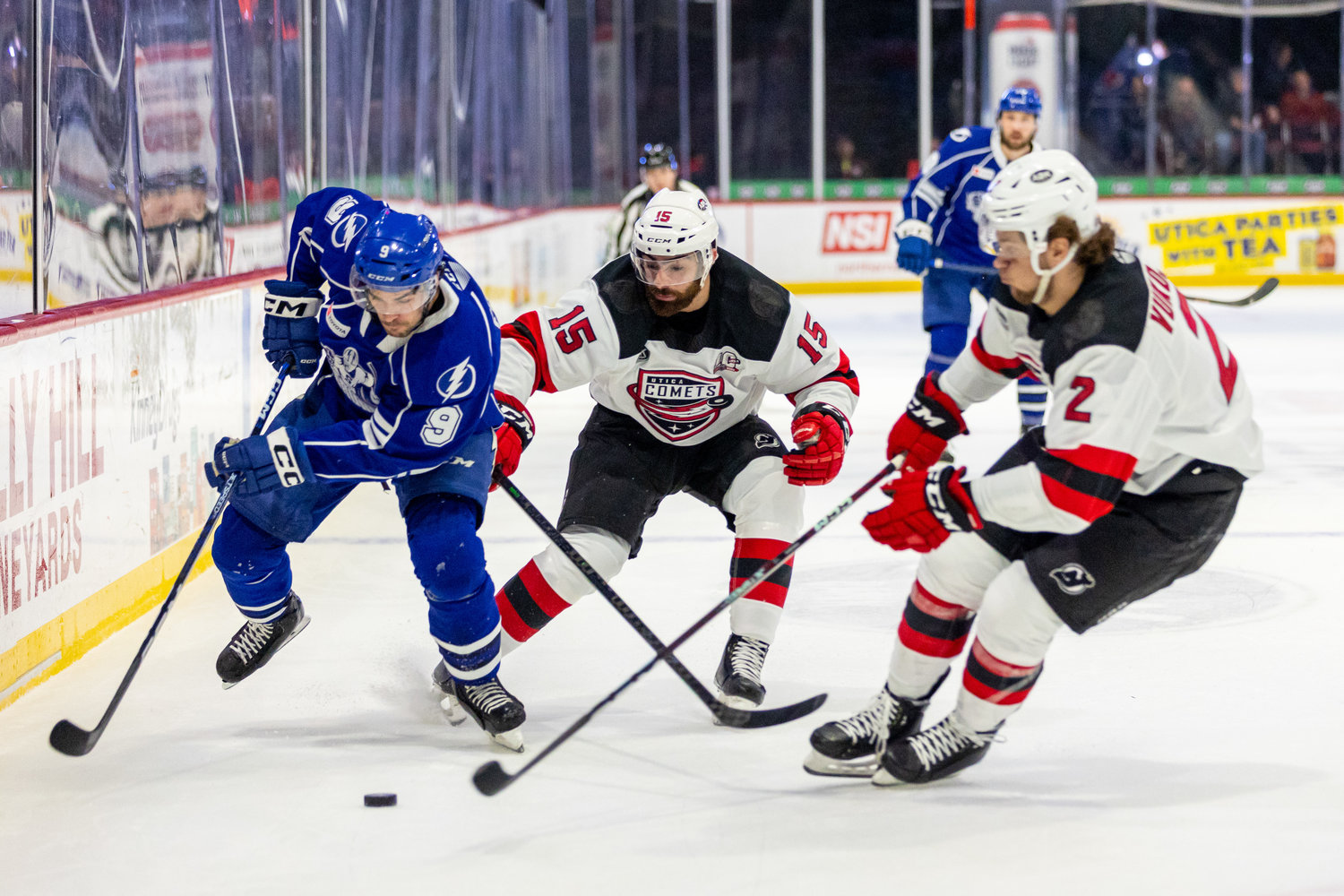 UTICA – The Utica Comets continue to look for answers against the Syracuse Crunch.

While Akira Schmid turned in a solid performance, the Crunch got their own quality effort from Max Lagace and new all-time points holder Alex Barre-Boulet factored into both goals to hand the Comets a 2-0 setback Friday in the first meeting this season in Utica before an announced capacity crowd of 3,719.
The Comets are now 0-4-0-0 against Syracuse in the 14-game series between the teams. Utica won 11 of 14 during the team’s first season in 2021-22 as the New Jersey Devils’ affiliate.

“They play a hard game and have some big bodies,” Comets captain Ryan Schmelzer said. “We just have to find a way as a group. I thought (Friday) was a better effort than we’ve had in the past (against them this season). We’re still coming up short. We have to find a way.”

Lagace finished with 25 saves, including 10 in the final period when Utica added an extra attacker late.

Schmid, who was making his first start this season against Syracuse after compiling a 6-0-1 mark against the Crunch as a rookie, finished with 20 saves. He made some impressive stops throughout the game, including a highlight-worthy effort with about five minutes left in the second period. After making an initial stop, he turned to his right to twist and stop Ilya Usau’s open look.

“I thought Akira was great,” Dineen said. “I thought he played a real solid game for us and gave us an opportunity.”

Oh, we got some VIGILANTE SCHMID as he dives to keep this out.
Oh wow pic.twitter.com/i0jjRtND7d

Syracuse has controlled the series this season, outscoring Utica 20-5 combined with Monday's 5-1 result.

This is part of a stretch in which Utica meets Syracuse a total of five times over eight games when factoring in the remainder of the contest to be played Tuesday against Wilkes-Barre/Scranton.

It is part of an important stretch for the Comets (19-12-5-1, 44 points), who sit in second place in the North Division as the mathematical second half of the 72-game schedule gets rolling. Utica is 1-3-0-0 in the last four games.

With the result and Rochester’s overtime loss Friday, Utica is three points ahead of both the Amerks and surging Syracuse (18-13-2-3 overall), which has won five consecutive games. The Amerks have completed two fewer games than Utica, while Syracuse has played one less.

Friday is the first time this season that the Comets were held without a goal in a game. Comets coach Kevin Dineen felt the team lacked urgency on offense at times Friday.

“I think there has to be a mixture of composure and desperation,” he said. “It is understanding that we’re a lot better with the puck in their zone. And, how we have to get it there is something we’re trying to work through and continue to get better at specifically when we’re along the boards.”

Graeme Clarke, who had a team-best four shots, had one of the Comets’ best chances with about 12 minutes remaining in the second period after catching up to a rolling puck, but Lagace was able to make a stop on the wrister from the right circle.

On that goal, Trevor Carrick grabbed a loose puck and his shot from the left point bounced off traffic in front to Barre-Boulet, who quickly passed to Gabriel Dumont. The Crunch captain put a shot from the slot and it glanced off Schmid and in with 2:58 left in the period. The assist was Barre-Boulet’s 242nd point, which is a Syracuse record.

Utica made a push in the third, but Syracuse got a breakaway goal in with 7:09 to play to put the game out of reach.

“There’s ebbs and flows in the game. In the second period, we kind of lost our mojo,” Schmelzer said. “As we were down, we got desperate and could feel it. … It was just one of those games that didn’t go our way.”