The Utica Comets needed some added insurance in the crease this season. 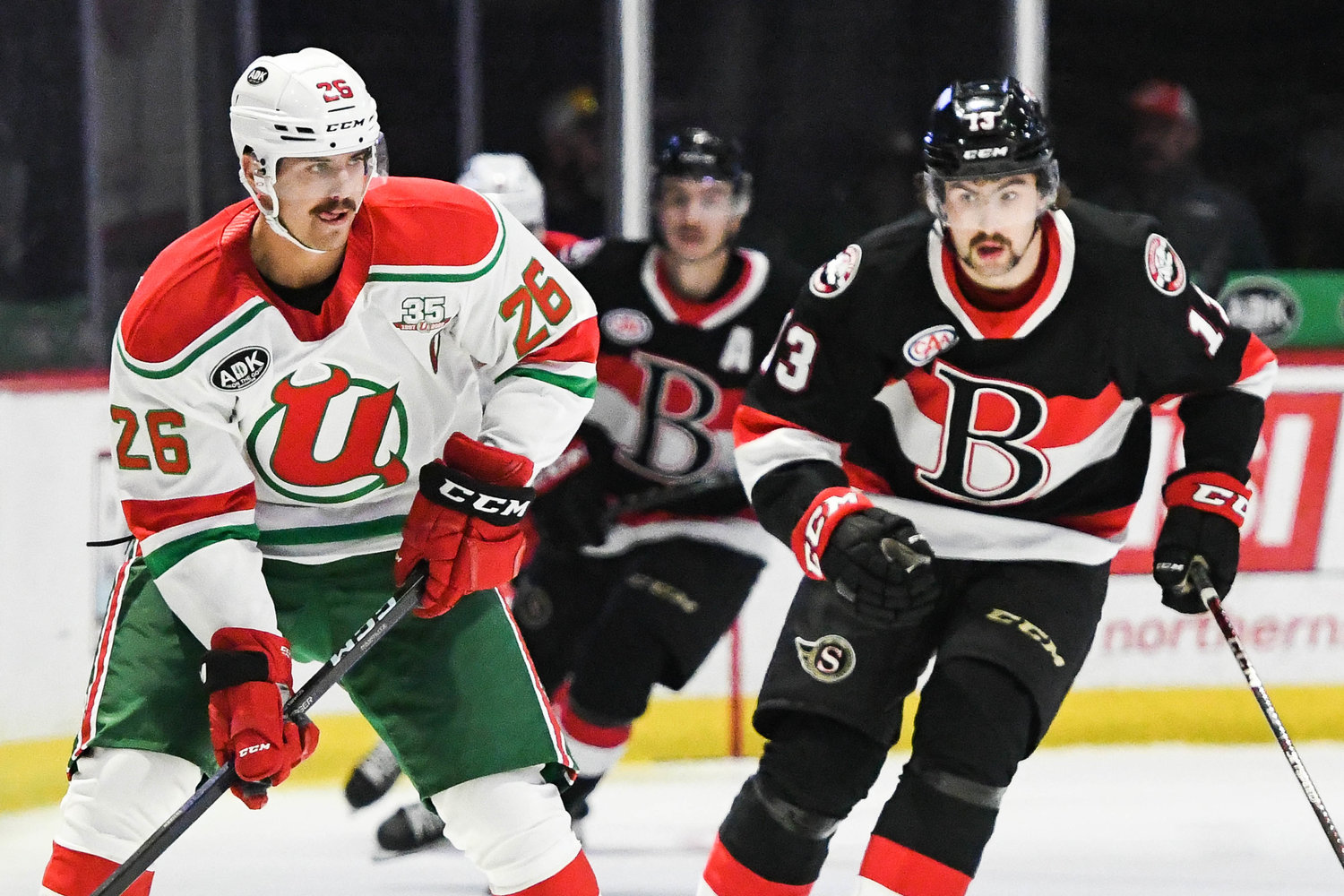 UTICA — The Utica Comets needed some added insurance in the crease this season.

The Comets and parent club New Jersey Devils have had to navigate through some goalie issues again this season.

The situation has been influx — not nearly to the extent it was during the 2021-22 season when Nico Daws and Akira Schmid were unexpectedly thrust into NHL duty — most recently following New Jersey goaltender Mackenzie Blackwood missing time with a knee injury. Jonathan Bernier also remains out following offseason surgery.

And, while Schmid has been on recall from the Comets since early November, the Devils were forced to recall fellow second-year prospect Daws when Schmid was reportedly ill this week.

That left rookie Isaac Poulter as the remaining option to handle the goaltending duties for the Comets. Mareks Mitens is also signed to an AHL deal, though has been out of action since early November with a lower-body injury.

With the Comets in need Wednesday, the team pulled Jake Theut up from ECHL affiliate Adirondack in Glens Falls on a professional tryout contract. The 29-year-old, who has Southern Professional Hockey League and ECHL experience after playing in college at Northeastern and Alabama-Huntsville, served as the Comets’ backup in Wednesday’s 3-2 loss to Laval.

With Daws being returned to Utica by New Jersey on Thursday, Theut was released from his professional tryout contract with the Comets and assigned back to Adirondack.

That’s not the end of the story with Utica and Theut, though.

Comets General Manager Dan MacKinnon confirmed Friday that Theut has been signed to a two-way American Hockey League deal for the rest of the 2022-23 season. He remains with Adirondack.

Signing Theut provides some depth and insurance to the organization’s goalie ranks, MacKinnon confirmed. Should a need arise at the NHL level, Theut could return to the Comets. Signing him restricts another AHL team from calling him up.

He’s needed in the system as it is possible Mitens could miss the rest of the 22-23 season. He’s expected to have surgery next week, MacKinnon acknowledged.

Ahead of the Friday’s North Division clash against Toronto, the Comets’ goaltending duo remained Daws and Poulter. The team is set to head to Belleville to take on the Senators at 7:05 p.m. Saturday in Ontario.

Both Daws and Poulter have provided the Comets’ with solid efforts over the last week. Included is Poulter’s standout effort against Laval when he made several timely saves.

In four starts, Poulter has a 4.35 goals-against average with a 1-1-2 record. He earned his first pro win last weekend at Charlotte.

Daws is trying to become the seventh goaltender to reach 20 career wins with the Comets. He had 17 entering Friday. A total of 25 goalies have played in a game with the Comets since 2013.

In a team-best nine starts this season entering Friday, Daws has a 2.46 goals-against average. That was eighth-best in the AHL entering Friday. He also has a .906 save percentage.

Late Friday, the Devils announced Andreas Johnsson was recalled from the Comets.

The move was needed as New Jersey didn’t have an extra healthy forward with Nathan Bastian injured.

WHAT TO KNOW: Entering Friday’s home against Syracuse, Belleville was 2-3-0-0 in the last five games. Belleville picked up a 4-1 win over Laval on Nov. 26. ... Belleville was 6-5-0-0 at home this season entering Friday’s game. ... Belleville features former Comets players Cole Cassels and Cory Conacher. Though, the latter hasn’t played since Nov. 2 due to an undisclosed reason. ... Graeme Clarke (goal, assist) and Ryan Schmelzer (two assists) lead Utica in points against Belleville this season. Reilly Walsh (three goals, assist) and Robbie Russo (goal, three assists) led the team in points last season against Belleville. Both appeared in six games. ... The game is the first of three consecutive on the road. Utica has earned five out of a possible six points in the last three games (2-0-1-0). The team is 2-4-1-0 on the road this season.

Upcoming games: Friday, Dec. 9 at Rochester and Saturday, Dec. 10 at Syracuse. Both games are set for 7 p.m. starts.