The Utica Comets' 10th season home opener will certainly be a memorable one. The Comets were holding a 2-1 lead against the Wilkes-Barre/Scranton Penguins on Monday at the Adirondack Bank … 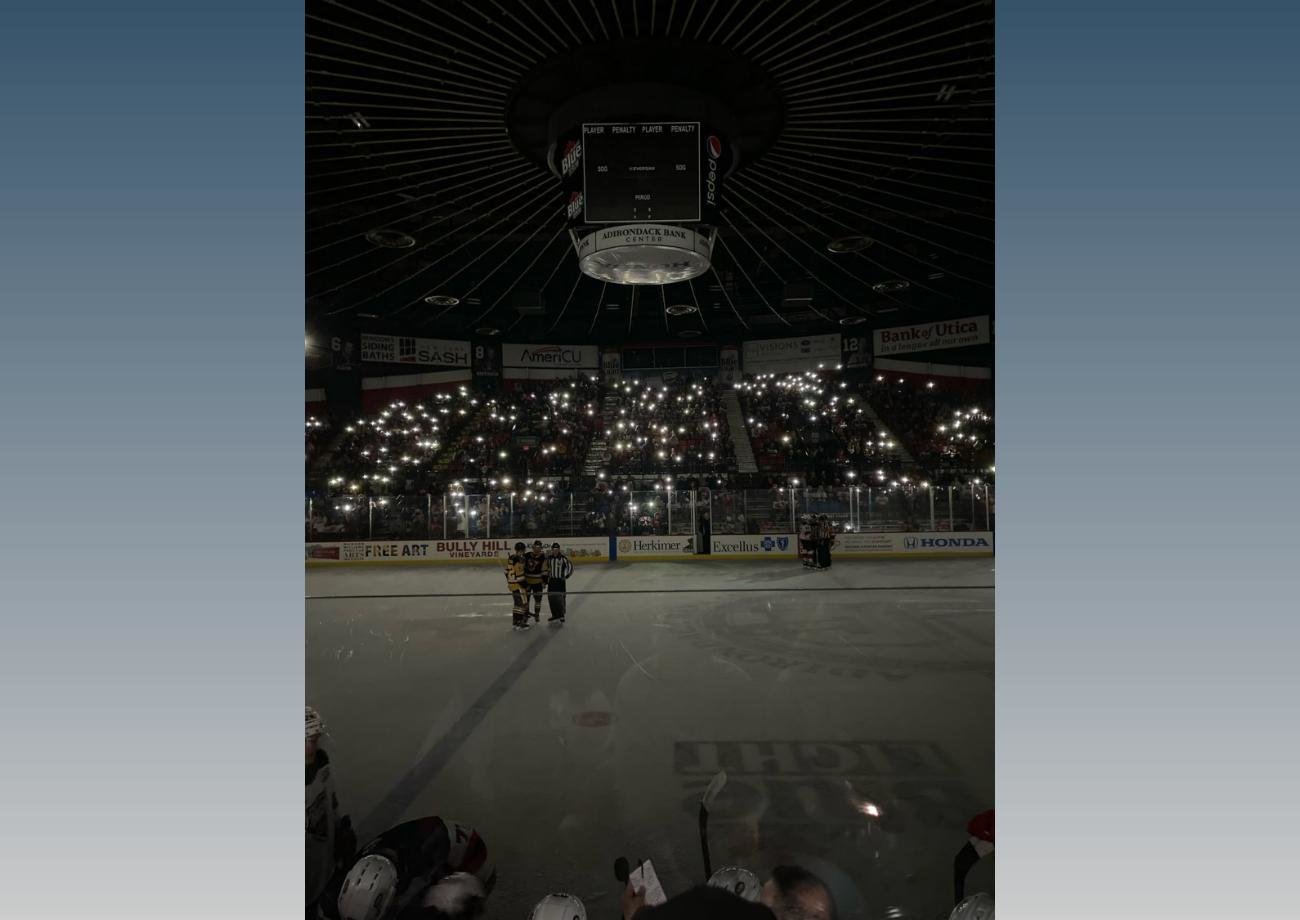 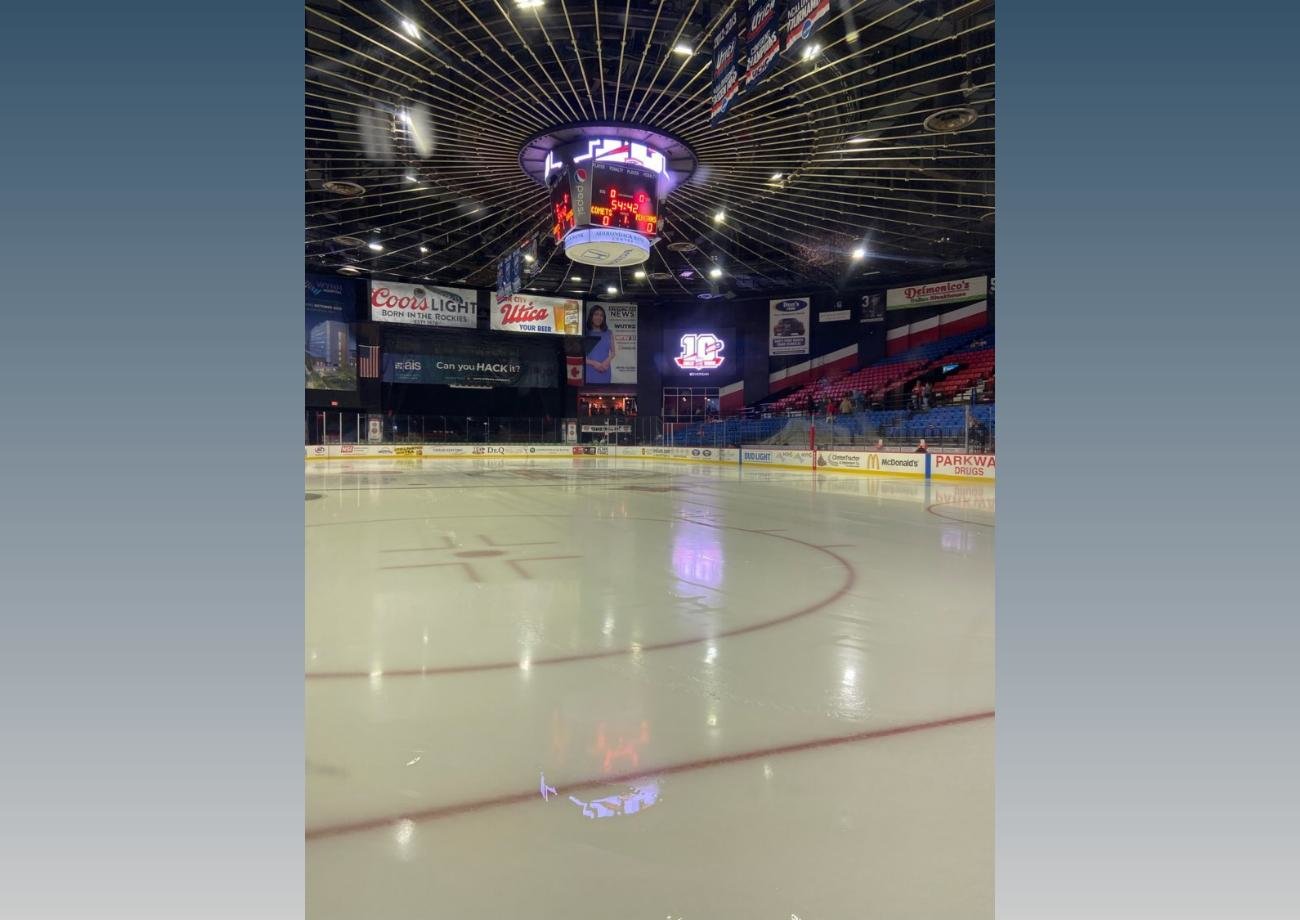 The Adirondack Bank Center is shown before Monday's game. The game was postponed late in the second period after the power went out.
(Sentinel photo by Ben Birnell)
Previous Next
Posted Monday, October 17, 2022 11:36 pm
Ben Birnell
Sports writer
email / twitter

UTICA — The Utica Comets' 10th season home opener will certainly be a memorable one.

The Comets held a 2-1 lead late in the second period against the Wilkes-Barre/Scranton Penguins on Monday in front of a jam-packed crowd of more than 3,000 people at the Adirondack Bank Center at Utica Memorial Auditorium.

With a stoppage in play as the officials sorted out penalties following a kerfuffle between the Comets and Penguins with 2:43 left in the second frame, the arena suddenly was eveloped in darkness following a complete power outage.

Fans quickly turned on their cell phone lights to illuminate the building. There were a few chants from the crowd.

Players and officials stayed on the ice for a few minutes before heading to their respective dressing rooms. The power outage happened at 8:32 p.m. and there was announcement for people to remain in their seats, though there was appeared to be some unhappiness among fans.

By about 8:52 p.m., there was an announcement that the game was postponed and fans were told to exit the building. Fans left with help from ushers, building staff and Utica Police Department officers.

"This is a new one for sure," Comets Vice President Adam Pawlick said as crews worked to address the issue. "We'll find the answers and get to the bottom of (the outage)."

There were reports that emergency lights didn't illuminate after the outage, which coincides with the completely dark feel. Pawlick wasn't sure Monday night why those lights didn't turn on.

Pawlick, a former pro hockey player who has been Comets VP since November 2017, said he's been in buildings where the power has gone out and it just clicked back on. That didn't happen this time, though there was hope the game could have resumed Monday.

He gave credit to Mohawk Valley Garden Chief Operating Officer Rick Redmond and his crew quickly trying to figure out the issue.

"I give credit to the entire fan base. Everyone's phone was out and everyone followed directions. Everyone evacuated smoothly when we said the game was postponed," Pawlick said. "I give everybody involved credit."

The game was meant as a way to honor the 35th anniversary of the Utica Devils' first American Hockey League home game as the New Jersey Devils' affiliate. The Comets are in their second season as New Jersey's affiliate after eight seasons partnering with the Vancouver Canucks.

A National Grid spokesperson said in an email statement to the Daily Sentinel at 10:40 p.m.: "National Grid is aware of an electric outage at the Utica Memorial Auditorium. Crews are currently investigating the cause and will work with arena management to restore service as safely and quickly as possible."

It is the first time in memory that full power to building— which opened in 1960 and has undergone updates and upgrades in recent years — has gone out during an event. The occurrence appeared to be confined to the arena as there was power in the surrounding area.

A Daily Sentinel reporter witnessed National Grid employees working outside of the building on Whitesboro Street not long after the outage.

Around 10 p.m., some of the lights in the building's concourse appeared to be back on. The team said in a social media post just after 11 p.m. officials were still navigating the situation.

By around 11:45 p.m. most lights appeared to be back on on the outside of the building. There was no update from National Grid later Monday.

The downtown arena has been used countless times in recent months for various events. The Comets played a preseason game in the building in early October.

On Monday, lights at the Nexus Center, which is under construction next to the arena, remained on. However, that is powered by a generator, according to officials.

The WBS bus with players and staff pulled out of the Aud parking lot about 9:55 p.m. Monday to return to Pennsylvania.

The AHL said Monday the game "will be completed at a later date."

On Tuesday afternoon, the team announced that later date when the game will be resumed. The game will pick up where they left off at 7 p.m. Tuesday, Jan. 24.

That works logistically as Wilkes-Barre/Scranton is scheduled to play at Rochester the next night. Utica also has a home game Jan. 25 against Charlotte.

The team said "all ticket purchasers from Monday's game "will recieve a free ticket to the rescheduled date." More information will be available "at a later date," the team said.

The Comets next home game is scheduled for 7:05 p.m. Friday against Cleveland.