UTICA - Tuition will not go up, new hoodies are on the way and the large stone entrance signs bearing the old name will get replaced eventually as Utica College transitions to Utica University in the … 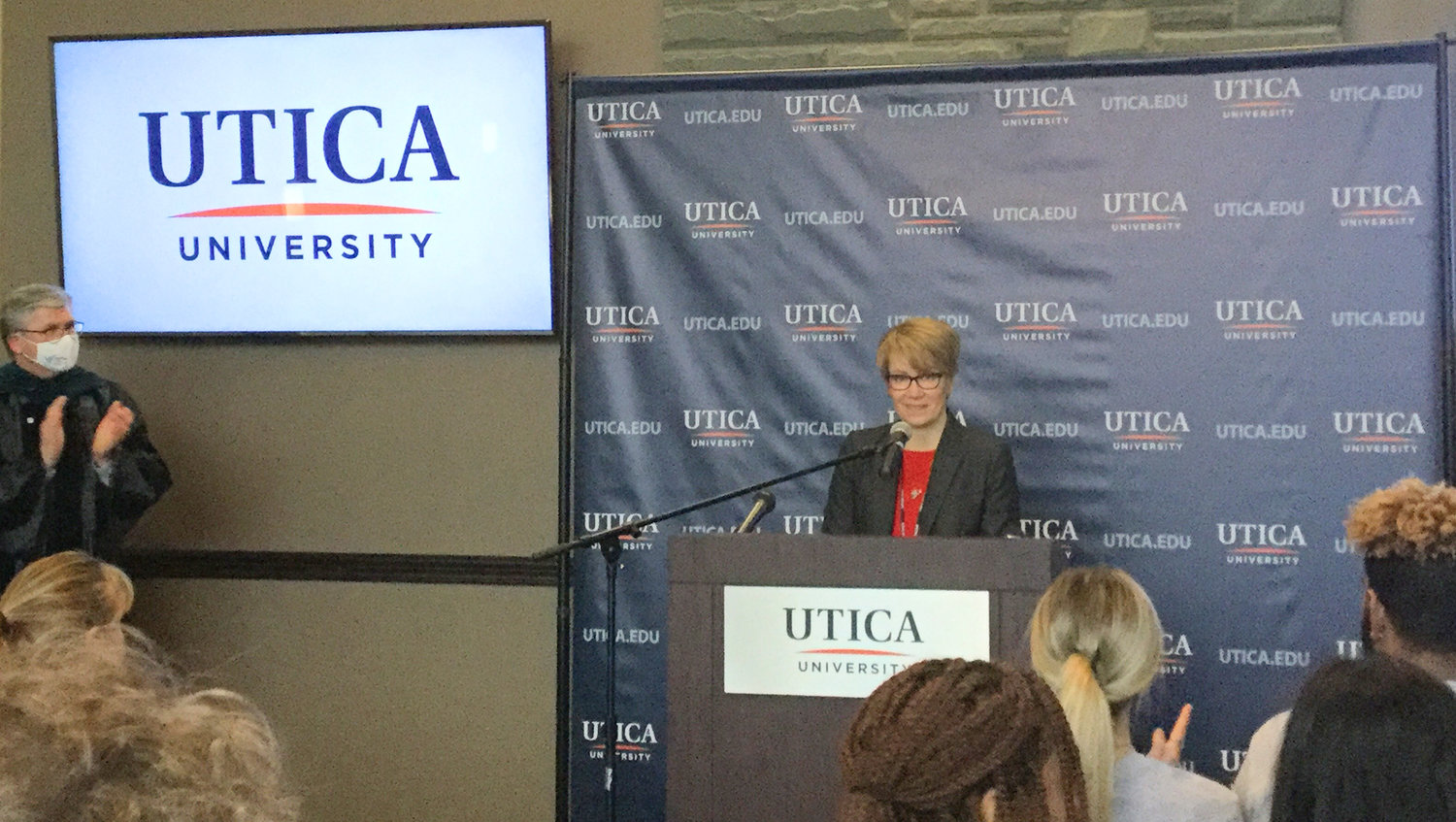 UTICA UNIVERSITY — Dr. Laura Casamento, president of Utica University, made the official announcement of the name change on campus Thursday morning. Casamento said there would not be a rise in tuition, and the new name would help with both recruitment and with graduates entering the workforce.
(Sentinel photo by Sean I. Mills) 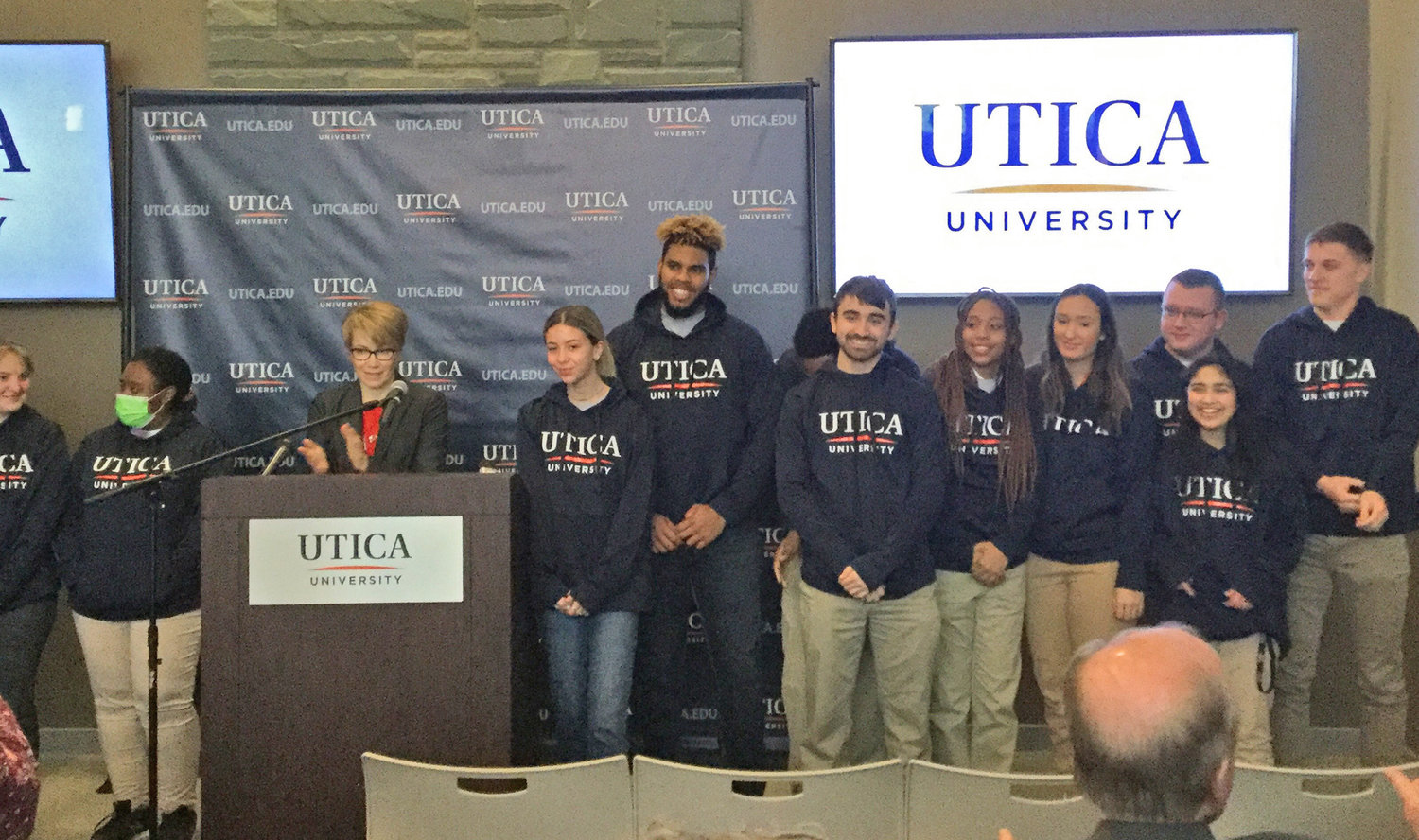 NEW HOODIES — Several Utica University students show off the first batch of branded school hoodies on Thursday. School President Laura Casamento said she was told by several students that the new change wouldn't be real until it was on a hoodie.
(Sentinel photo by Sean I. Mills)
Previous Next
Posted Thursday, February 17, 2022 1:41 pm
Sean I. Mills
Staff writer
email / twitter

UTICA - Tuition will not go up, new hoodies are on the way and the large stone entrance signs bearing the old name will get replaced eventually as Utica College transitions to Utica University in the coming weeks, according to university officials.

"For the record, we are not going to go by 'UU'. We are 'Utica'," said Dr. Laura Casamento, the university's  president, at the official unveiling Thursday morning.

Casamento broke the news about the name change and new designation in a letter to students and faculty on Wednesday. The change to Utica University was then officially announced at a ceremony on campus Thursday morning, attended by students, faculty, board members and other local dignitaries.

"We're seeing generations of hard work come to fruition. This is what our founders ultimately intended. We're a university and we are super proud of it."

Casamento continued, "This day is not about a name change. It represents the culmination of decades-long commitment to strategic growth, academic excellence through innovative programs and curricula, and an unwavering belief in providing incredible, life-changing opportunities to all students through higher education."

She added that such a name change is only really official when it shows up on school hoodies, and she was joined by a dozen Utica University students wearing the first branded hoodies of the new era.

Utica College was founded in 1946 as an extension of Syracuse University, then went on to achieve independence in the 1990s and 2000s. Casamento said the school has been operating as a university for years, and have been trying to change their name for at least the past 15 years.

It was a recent definition change by the New York State Department of Education Board of Regents that helped them clear the final hurdle, she said. The board changed the definition of a "university" in New York in January, and Utica College immediately petitioned to change their charter. The change was granted on Tuesday.

Utica University currently has more than 3,300 undergraduate students enrolled, more than 1,300 graduate students, and is offering more than 40 majors and 40 minors, along with other pre-professional and special programs and certifications.

"in terms of the breadth and depth of our programs, this change is a true reflection of who we are today as an institution," Casamento stated.

"This exciting news will strengthen our ability to recruit students and faculty internationally and from other parts of the country."

Casamento noted that the word 'college' is often associated with high school in other parts of the world, so being a university should help with recruitment. She added that the new name will help graduating students when they look for work in the job market. And a program is being set up for alumni to request a new diploma with the changed name.

When asked if the new name will lead to a raise in tuition costs, Casamento firmly denied any such blow to student pocketbooks.

"Nothing about how we're operating today changes, as far as the financial model," the president stated.