Drivers got an unwelcome economics lesson last night while they were sleeping — gas prices, apparently, never rest as global markets continue to wrestle with the cost of oil following the Russian … 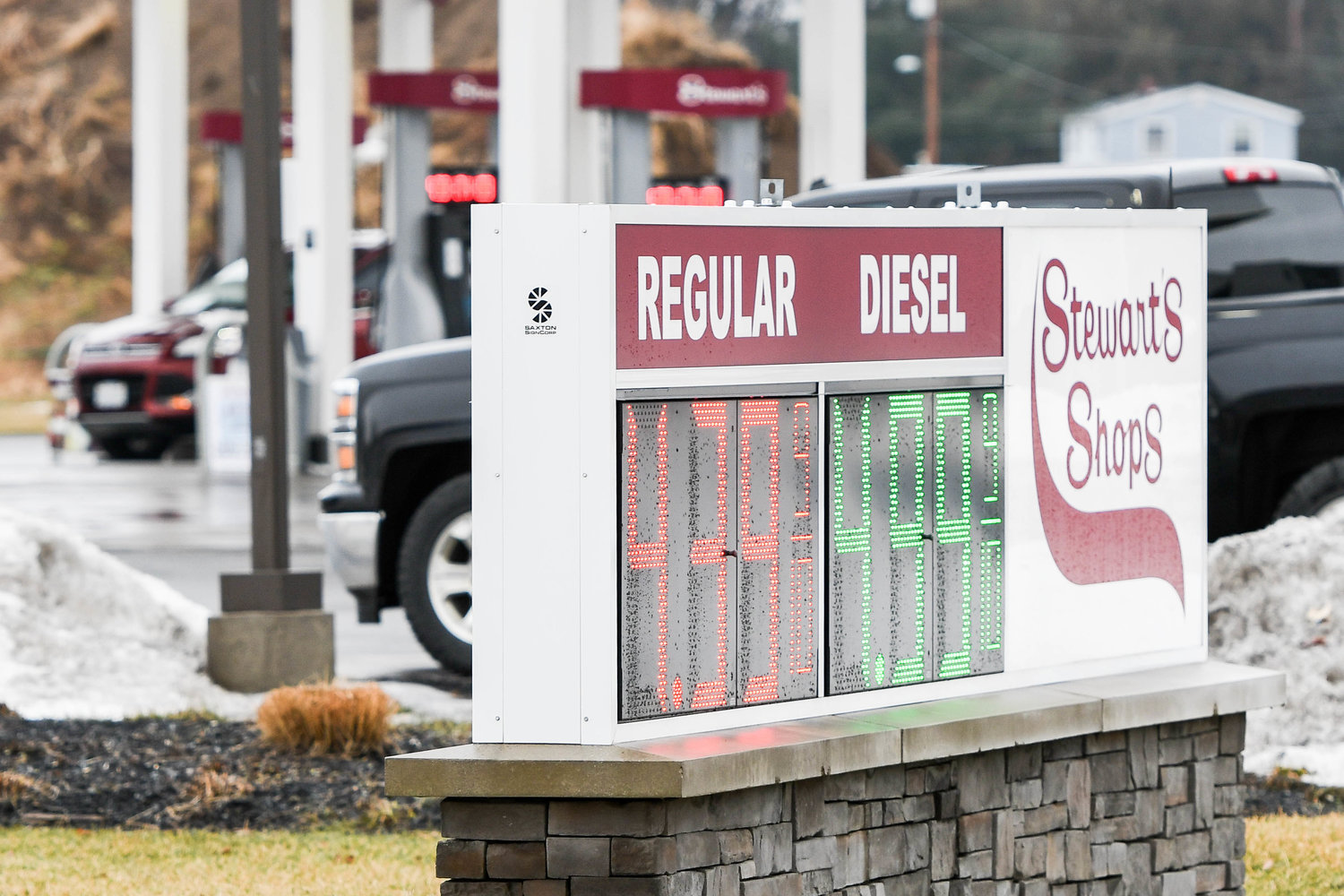 BAD NEWS AT PUMP — Gas prices are listed outside of Stewart’s Shops on Floyd Avenue in Rome. Prices are now well over $4 per gallon across the state — and industry experts warn the increases may eventually top $5.
(Sentinel photo by Alex Cooper)
Posted Wednesday, March 9, 2022 6:30 am
Staff and wire reports

Drivers got an unwelcome economics lesson last night while they were sleeping — gas prices, apparently, never rest as global markets continue to wrestle with the cost of oil following the Russian invasion of the Ukraine.

The cost of an average gallon of regular gasoline rose 10 cents overnight, reaching the state’s highest average all-time price, according to industry observers at AAA.

When most motorists went to bed Monday, the cost of a gallon of gas was $4.26 per gallon in New York. As of Tuesday morning, gas prices had risen to $4.36 per gallon. That price was above the national average of $4.17 per gallon as well as the cost in the neighboring states of Massachusetts ($4.24 per gallon) and Connecticut ($4.24 per gallon).

The cost is expected to continue to rise, following the announcement by President Joe Biden that the U.S. will ban the import of Russian energy products as a result of that nation’s invasion of the Ukraine.

The amount of U.S. gasoline in storage fell last week as demand starts to tick higher with summer approaching. The increase in gas demand and with inventories trending lower is contributing to rising prices at the pump, but skyrocketing oil prices are playing an increasingly large role as the conflict in Ukraine escalates.

The price of benchmark U.S. crude jumped 8% Tuesday to more than $129 per barrel.

Americans can expect the current trend at the pump to continue as long as crude prices climb, the AAA said.

Rising gas prices come as President Joe Biden has decided to ban Russian oil imports, toughening the toll on Russia’s economy in retaliation for its invasion of Ukraine.

“We will not be part of subsidizing Putin’s war,” Biden declared, calling the new action a “powerful blow” against Russia’s ability to fund the ongoing offensive.

The U.S. imports about 100,000 barrels a day from Russia, only about 5% of Russia’s crude oil exports, according to Rystad Energy. Last year, roughly 8% of U.S. imports of oil and petroleum products came from Russia.

Curbs on Russian oil exports will likely send already soaring oil and gasoline prices higher in both the U.S. and Europe and further squeeze consumers, businesses, financial markets and the global economy.

Energy analysts warn that crude oil prices could go as high to $160 or even $200 a barrel due to oil sanctions imposed by the West or if buyers continue shunning Russian crude — oil prices that high could send an average gallon of U.S. gasoline past $5 a gallon, according to industry experts.

The U.S. energy sanctions wasn’t the only bad news for the Russian economy on Tuesday. Global companies, facing a torrent of complaints on social media, continue to close stores and disassociate with Russia. McDonald’s on Tuesday afternoon announced it was closing its nearly 850 restaurants at least temporarily. The burger giant said it will continue paying its 62,000 employees in Russia.

McDonald’s President and CEO Chris Kempckinski said closing those stores for now is the right thing to do. “Our values mean we cannot ignore the needless human suffering unfolding in Ukraine,” Kempczinski said, adding it’s impossible to know when the company will be able to reopen its stores.