Two undefeated local teams — Class A Whitesboro and Class C Westmoreland — earned top seeds for the Section III baseball postseason. In Class AA, the quarterfinals are at 5 p.m. Tuesday at the … 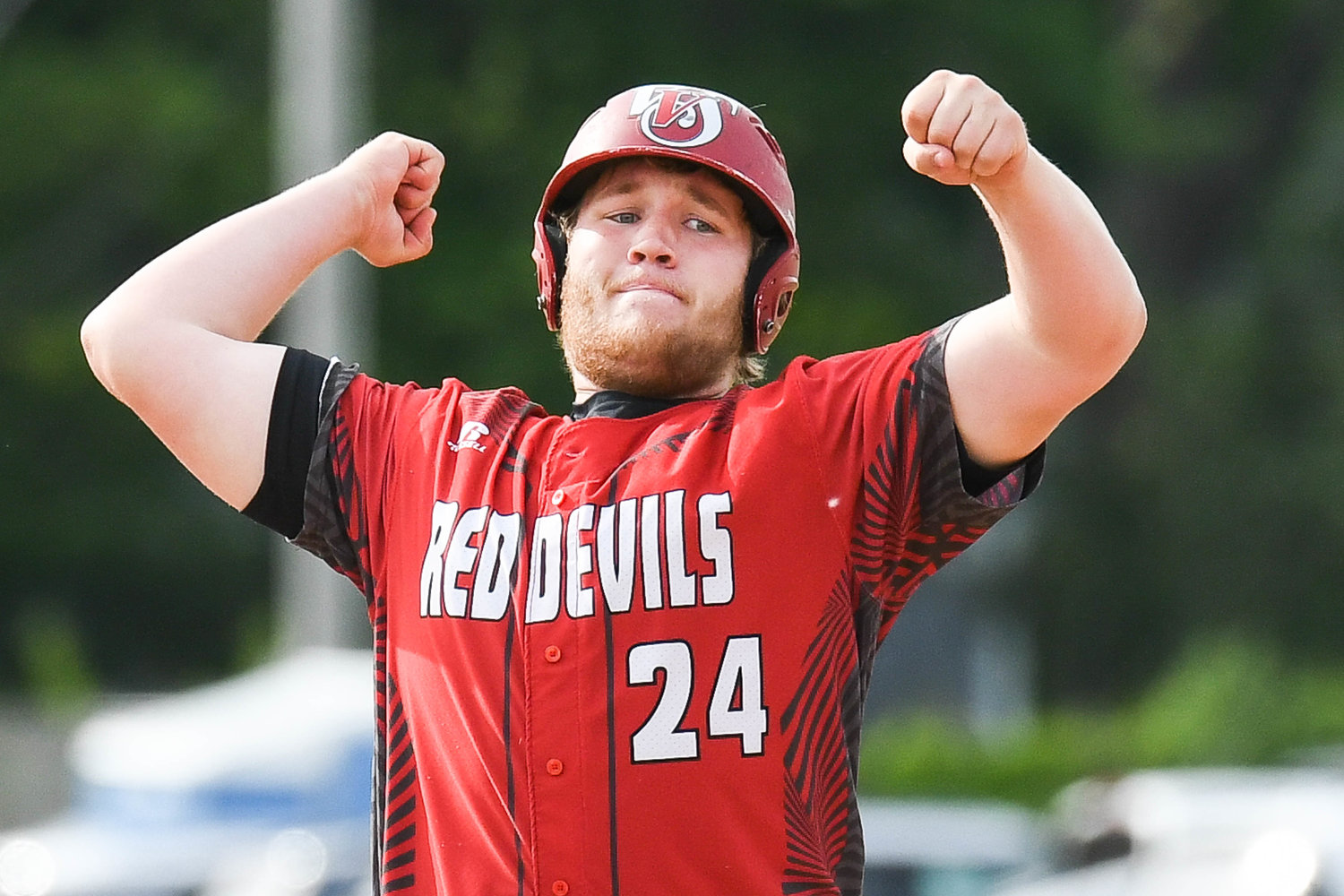 Vernon-Verona-Sherrill player Kessler Norman celebrates after hitting a double and driving in two runs during the Section III Class B first round game against host Clinton on Monday. VVS won 5-4. Game details were unavailable.
(Sentinel photo by Alex Cooper) 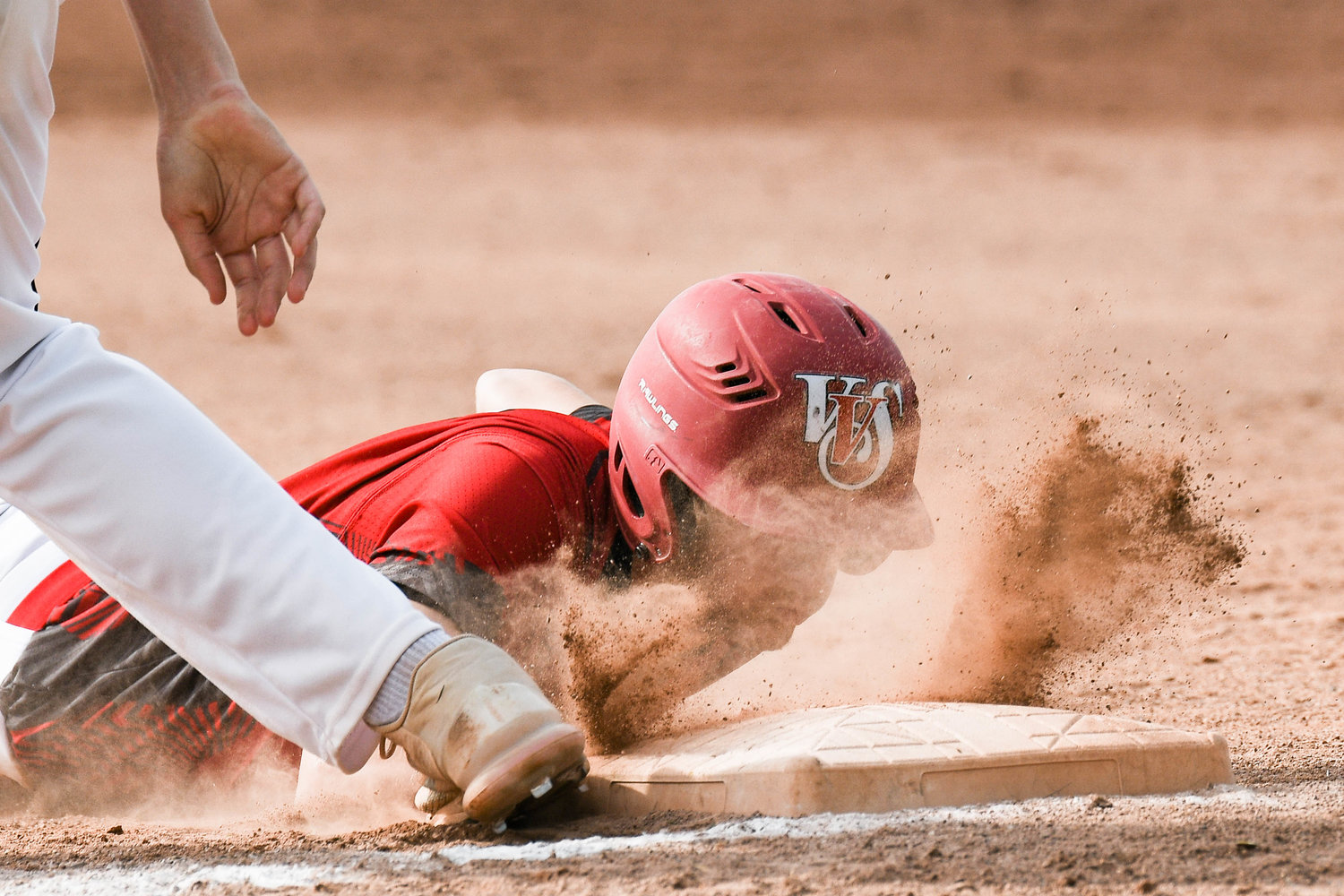 Vernon-Verona-Sherrill player Jackson Horodnick slides safely back to first base during the baseball game against Clinton on Monday. VVS won 5-4. Game details were unavailable.
(Sentinel photo by Alex Cooper)
Previous Next
Posted Monday, May 23, 2022 9:40 pm

The quarterfinals will be at 5 p.m. Thursday at the higher seed. Top seed Whitesboro (15-0) awaits the winner of J-D and Oswego. Two seed Cortland (17-2) plays the winner of New Hartford and Fulton. Three seed Christian Brothers Academy (14-4) hosts the winner of Carthage and Watertown. Five seed Camden (13-7) plays at four seed Auburn (12-6).

There were two first round games Monday in an 18-team Class B bracket, in order to even get into the second round. The 18 seed Vernon-Verona-Sherrill (5-12) defeated 15 seed Clinton (8-10) by a score of 5-4. Sixteen seed Central Valley Academy (7-11) hosted 17 seed Hannibal (7-12). Results were not available at press time.

The Westmoreland baseball team shut out Cooperstown 4-0 Friday then kept scoreless streak going Saturday in an 11-0 win at Sauquoit Valley.

Friday, Westmoreand scored two runs in the top of the first inning. That proved enough for Caleb Miller, who threw a complete game shut out to improve to 6-0 on the season. He allowed three hits and a walk while striking out 10. At the plate, Miller had two doubles, two runs and a stolen base.

Saturday the Bulldogs’ offense started off even stronger, with nine runs in the first, three in the second and four in the third.

Hunter Kierpiec moved to 8-0 on the season with the win. He went six innings and allowed two hits and walked five. He struck out eight.

With four runs in the top of the first and four more in the second, the Whitesboro baseball team cruised to a 12-1 win over host Utica Proctor in the Tri-Valley League Friday.

Colin Skermont improved to 6-0 on the season with the win on the mound. He came on in relief of Ryan Cook and allowed an earned run on a hit and two walks over 3 1/3 innings. He struck out four. Cook went 3 2/3 innings, allowing no runs, a hit and seven walks.

Joseph DePaul and Philip Sbarra had the Raiders’ two hits.

Proctor scores 10 in the third in win over RFA

The Proctor offense exploded for 10 runs in the third inning of the Raiders’ 13-7 win at home in the TVL over Rome Free Academy in both teams’ regular season finales.

Peyton Kimball had three hits including a pair of doubles for Proctor, with two runs and five RBIs. Joe Gentile had a single and a double with two runs scored. Genero Clemente had two hits, two RBIs and scored a run.

Juan Baez earned the win in relief. He went the final 4 1/3 innings while allowing four runs, one earned. He allowed six hits and walked two while striking out six.

Premo took the loss, going 2 2/3 innings and allowing 10 runs, one earned, on six hits and six walks. He struck out three.

The Holland Patent baseball team finished the regular season on a high note, earning a 12-2 win at Canastota Saturday in the Center State.

HP led 2-0 after two and then added three in the fourth and seven more in the fifth.

Jordan Carhart earned the win for HP on the mound.

John Burnett suffered the loss. At the plate he had a hit and drove in a run.

For the Marauders, Frank Calhoun doubled and drove in a run.

The Lowville baseball team got a 12-6 win against Adirondack in a recent game.

Kreedon Rogers had two hits including a home run for Adirondack. Jake Khouri had two hits, a run and an RBI.

Chris Strobel took the loss, allowing two runs without recording an out.

Statistics for Lowville were not provided. 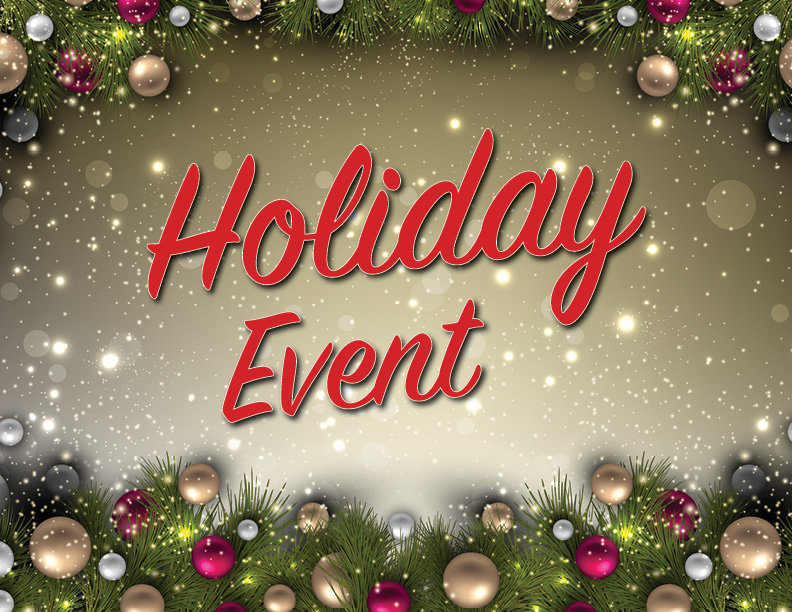