Section III Class C top seed Westmoreland scored eigth first inning runs and cruised to an 18-1 win over Alexandria Tuesday in a game that ended after five innings due to the mercy rule. Caleb Miller … 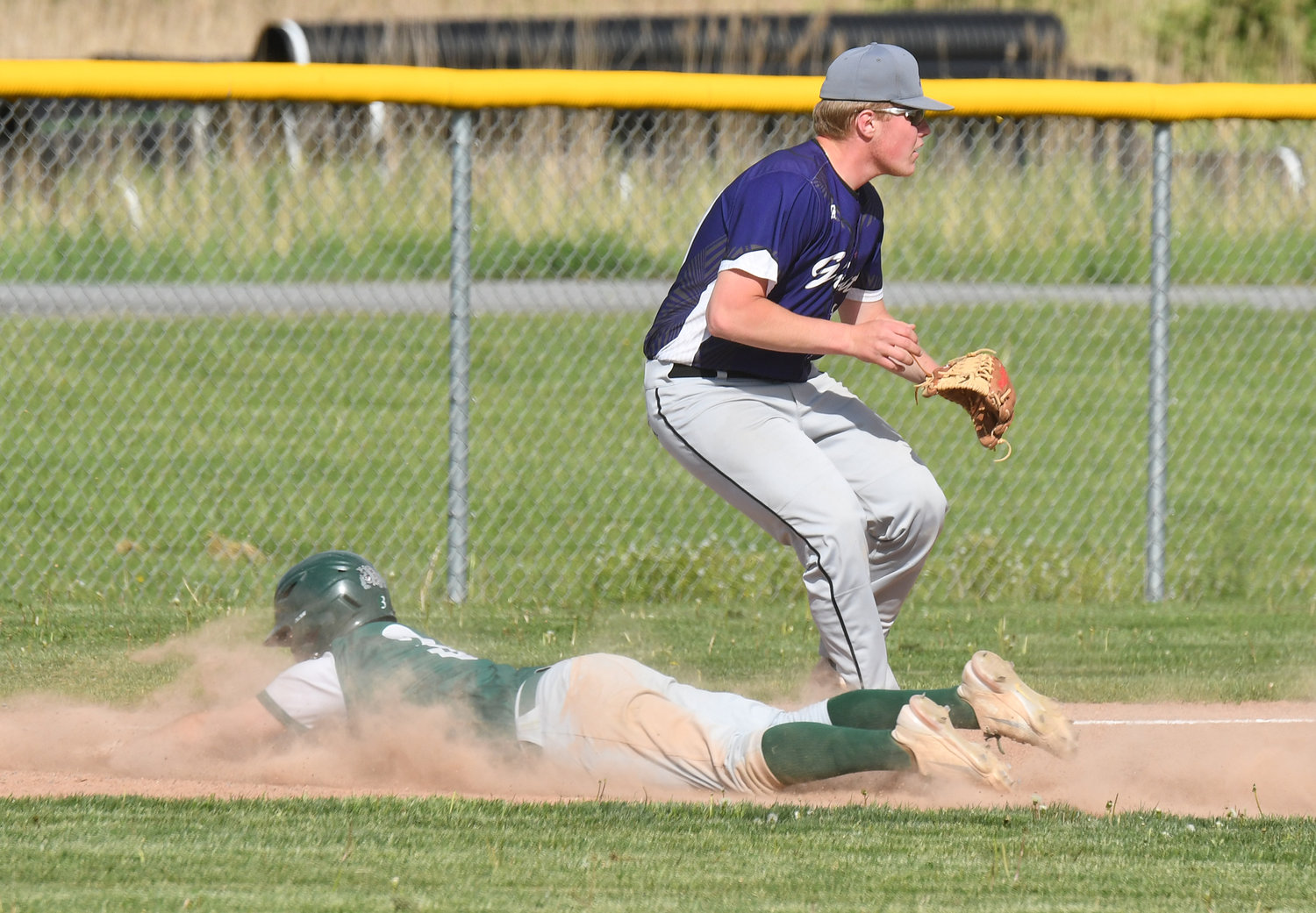 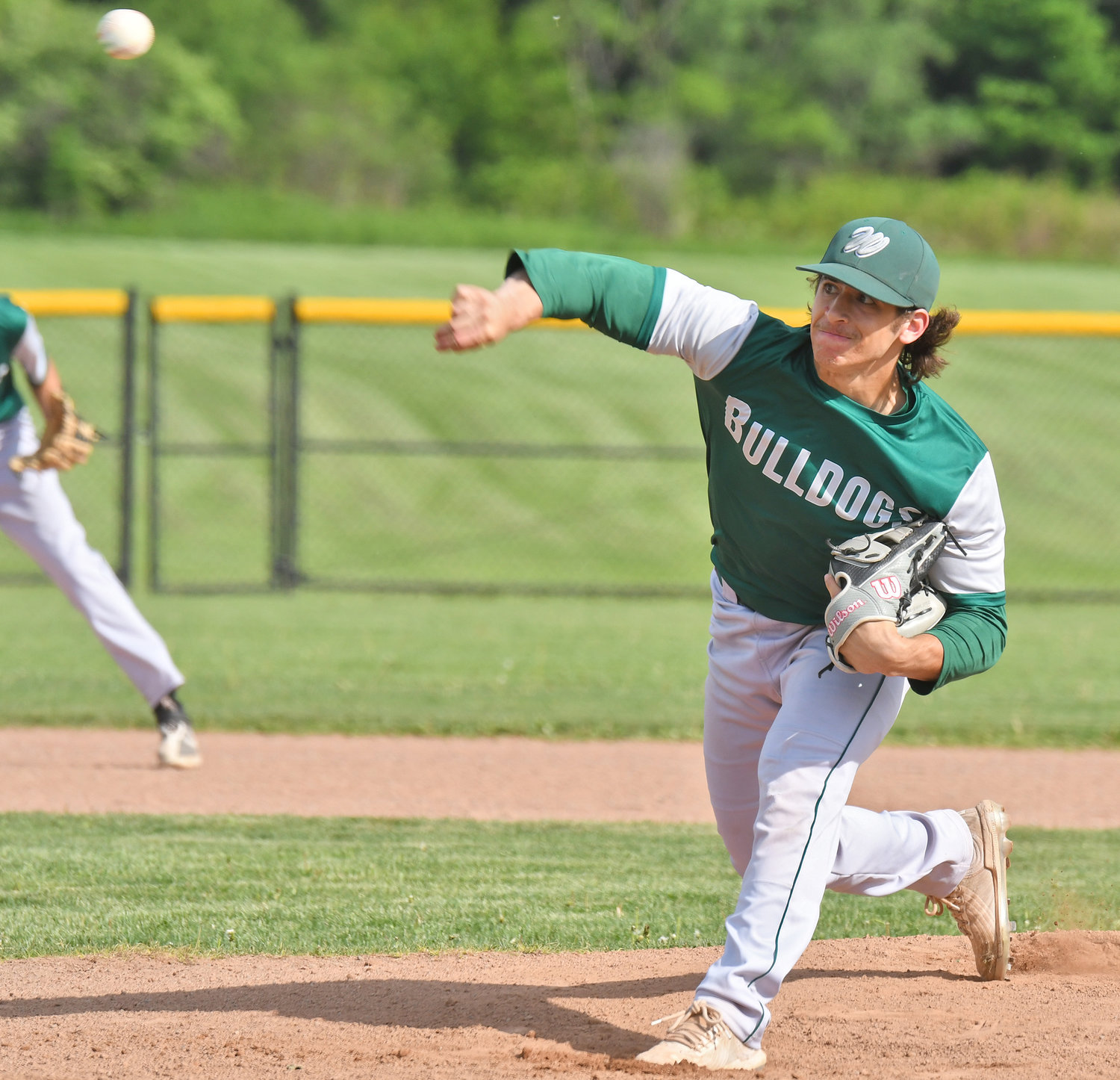 Westmoreland’s Caleb Miller delivers a pitch in the first inning of Tuesday’s 18-1 win at home against Alexandria in the second round of the Section III Class C postseason. Miller earned the win as the top-seeded Bulldogs remained unbeaten this season.
(Sentinel photo by John Clifford) 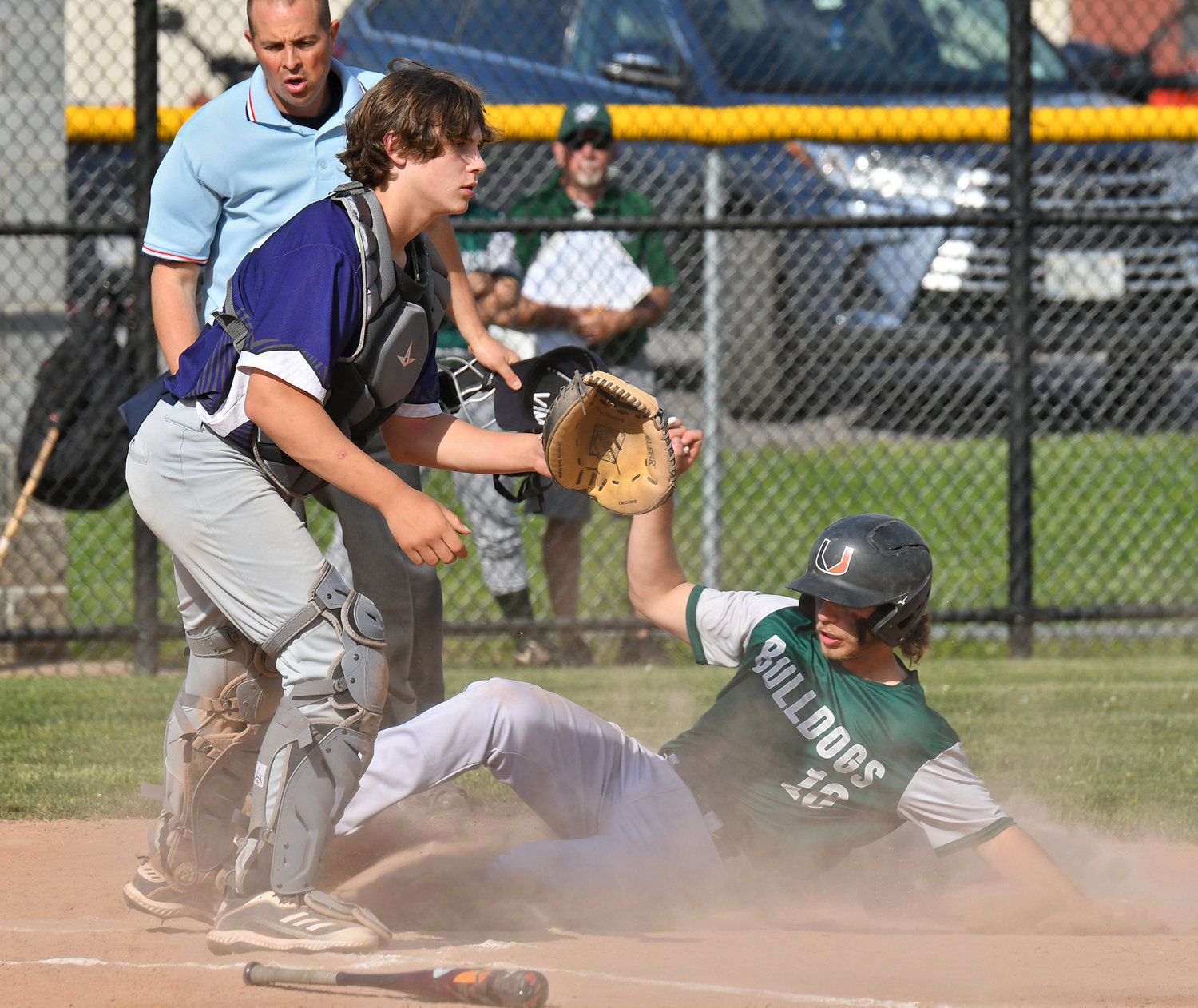 Westmoreland baserunner Michael Scalise slides safely into home at home Tuesday against Alexandria in the second round of the Section III Class C baseball playoffs. The top-seeded Bulldogs won 18-1 in a game called after five innings due to the mercy rule. Westmoreland is now 17-0 this season.
(Sentinel photo by John Clifford)
Previous Next
Posted Wednesday, May 25, 2022 8:41 pm

Section III Class C top seed Westmoreland scored eigth first inning runs and cruised to an 18-1 win over Alexandria Tuesday in a game that ended after five innings due to the mercy rule.

Caleb Miller improved to 7-0 on the mound behind overwhelming offensive support. He threw four scoreless innings, allowing three hits and striking out seven. Josh Suber pitched the last inning, allowing an unearned run on a hit and a walk with one strikeout.

Statistics for Alexandria were not submitted.

Westmoreland improves to 17-0 and will host eight seed Mount Markham at 5 p.m. Thursday in the quarterfinals.

Wildcats pile on in playoff win

The Adirondack baseball team smashed six seed Cooperstown 15-3 on the road Tuesday, an upset for the 11 seed in the Class C postseason tournament.

White also got the win on the mound, going 4 2/3 scoreless innings. He allowed three hits and two walks and struck out seven.

Adirondack will take on thee seed Pulaski on the road at 5 p.m. Thursday.

RFA shut out in season-sending loss

The Rome Free Academy baseball team’s season came to an end with a 10-0 loss at top-seeded Cicero-North Syracuse Tuesday in the quarterfinals of the Section III Class AA tournament.

The hosts scored three in the first, three more in the second and two in the third to lead 8-0.

Samuel Shaw won with a complete game effort on the mound. He allowed five hits and walked two while striking out 11.

Michael Flint and Jack Anderegg had two hits each for RFA.

The Northstars advance to play five seed Fayetteville-Manlius in the semifinals at 7 p.m. Thursday at Onondaga Community College.

The 12th-seeded Marcellus baseball team knocked five seed Holland Patent out of the Section III Class B postseason tournament with a 13-2 win on the road Tuesday in the second round.

Marcellus scored two runs in the top of the fourth to lead 2-1. HP responded with a run to tie the game. Then the Marcellus offense erupted for six runs to lead 8-2, putting the game out of reach.

John Francesconi earned the win on the mound.

Adam Sullivan was 4-for-5 with 2 RBIs for Marcellus. Teammate Ryder Donahue was 2-for-3 with two RBIs. Ethan Snyder had two hits and three RBIs.

Marcellus improves to 10-10 and will take on four seed Homer on the road at 5 p.m. Thursday in the quarterfinals at Homer.