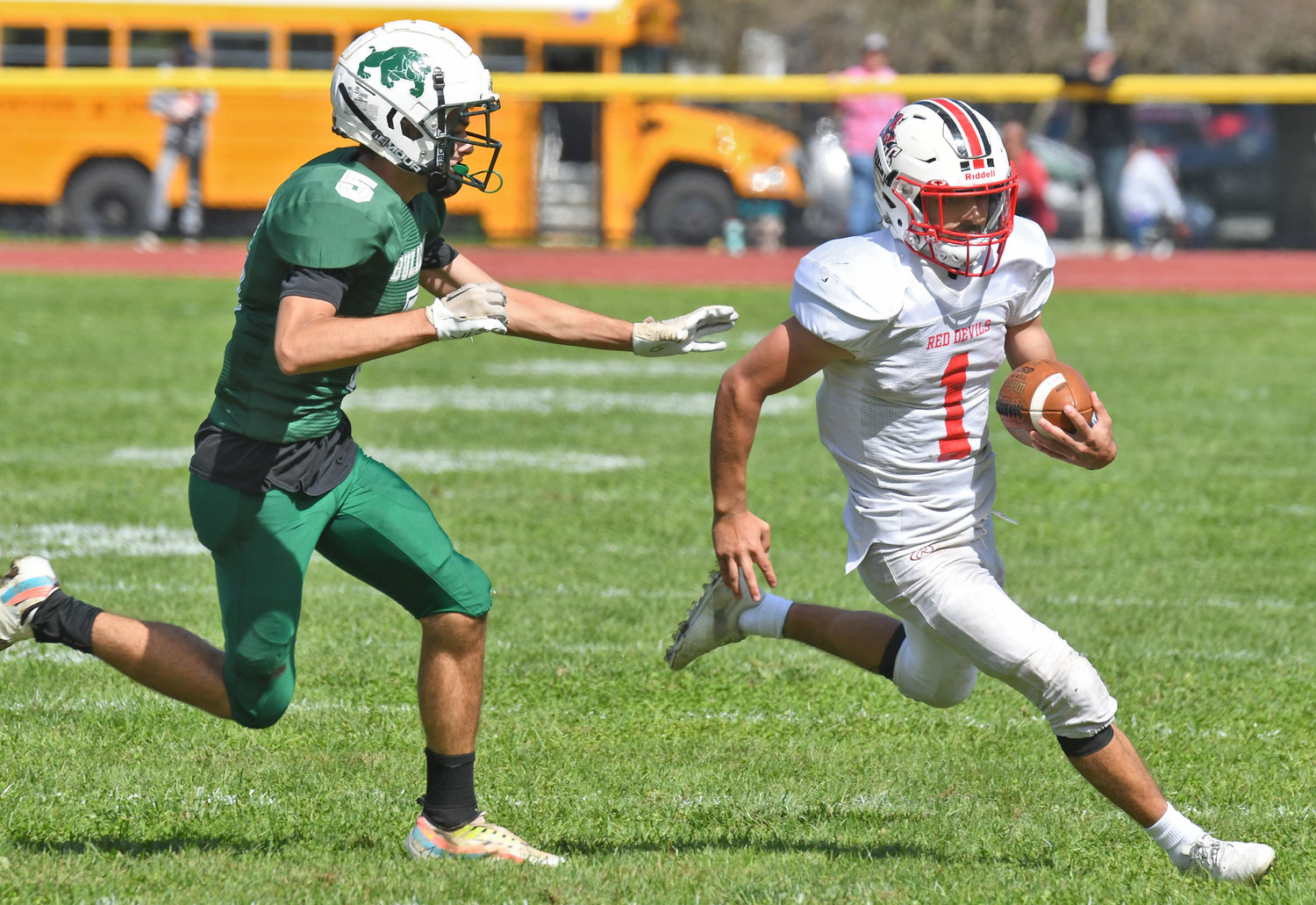 HP improved to 5-0 on the season with a late win at home against Southern Hills last week, scoring on a long passing touchdown to overcome a two-point deficit.

The team started the season without last year’s starting quarterback, as Aidan Rubas had been injured in baseball in the spring. In stepped running back Jonathon Zylynski, but then he injured a knee and has missed three weeks. That means running back Jordan Koenig has been at quarterback in recent weeks. Mike Romeo, the backup quarterback, who holds for kicks and runs the two-point conversion offense, has also been getting reps.

Koenig has been the primary threat, piling up 535 yards on 88 carries with five scores. He’s also thrown three TDs.

The team was missing five starters last week, but a few are on the mend and back in the lineup, mainly linemen.

“It’s a very important game. I keep harping on the kids that this was an old school rivalry,” said Briggs, who played for HP in the 1990s when the two schools played every year. He said VVS head coach Gary Oliver “has a good team.” Do-it-all running back James Wheeler IV “is fast,” and probably “the best running back in the league.” Matthew Rossi is top notch in the backfield as well, he added.

As for the HP offense, “This year we’ve been more run-heavy than pass.” The plan this week is to get close to an even split, but he’ll see “how their defense stands up to our offense.” He added, “Offensively we have to get clicking better. Last week we were clicking on all cylinders.”

“Defensively we have to contain Wheeler and look out for the Rossi kid,” Briggs said. The good news is “our defense is winning our ball games for us. Holding teams to less than 15 points a game, our defense is standing up.” Koenig was expected to be a top contributor but Acevedo has been key. “That kid’s a stud.”

HP is coming into the toughest part of its schedule. VVS is 3-2. Then comes a road game at General Brown Oct. 14 and the season finale at home against Adirondack on Oct. 22. Those two teams are both 4-0 and right on HP’s heels in the divisional standings. It is, Briggs said, “the meat of the schedule.” He added, “We have to get better and better. If we played like we played (last week) we’ll lose all three.” And he’s not looking ahead, it’s about VVS, he said. “We have to get by them.”

VVS is 3-2 in its first season back in Class C. The Red Devils have won their last two, 49-14 at Westmoreland/Oriskany and 32-22 over Lowville.

The team lost a number of last year’s offensive contributors to graduation but Wheeler has been steady in his return as a four-year starter.

Wheeler was supposed to be the tailback behind whichever new quarterback won the job. Instead, that plan hasn’t quite worked out. Now it’s Wheeler running the offense. Oliver said, “Right now he’s been the most consistent, taking command of the huddle and being a leader. So we’ve used him as our quarterback primarily.” It’s been a mix of traditional and wild cat formations.

Wheeler and Rossi have combined with Tyler Wittmann as the running attack. “If it’s doing what we want it to do, then we’re mixing it up so it’s not just Wheeler back there being the wild cat man,” the coach noted. In addition to Wheeler, Wittmann can run outside and Rossi goes inside.

The VVS defense had the pre-season challenge of finding nine new starters, with only two returning from last season. “We’ve made some adjustments and moved people around. It’s starting to jell,” Oliver said. Players are starting to understand the schemes, which allows them to just play hard. “We’re trying to get better every week.” He said the defense does know it has to stop Koenig, and to do that it must get lots of players to the ball and tackle well.