With themes of hope, perseverance and living life to its fullest, teachers, administration and staff at the New York State School for the Deaf sent two graduates out into the world ... 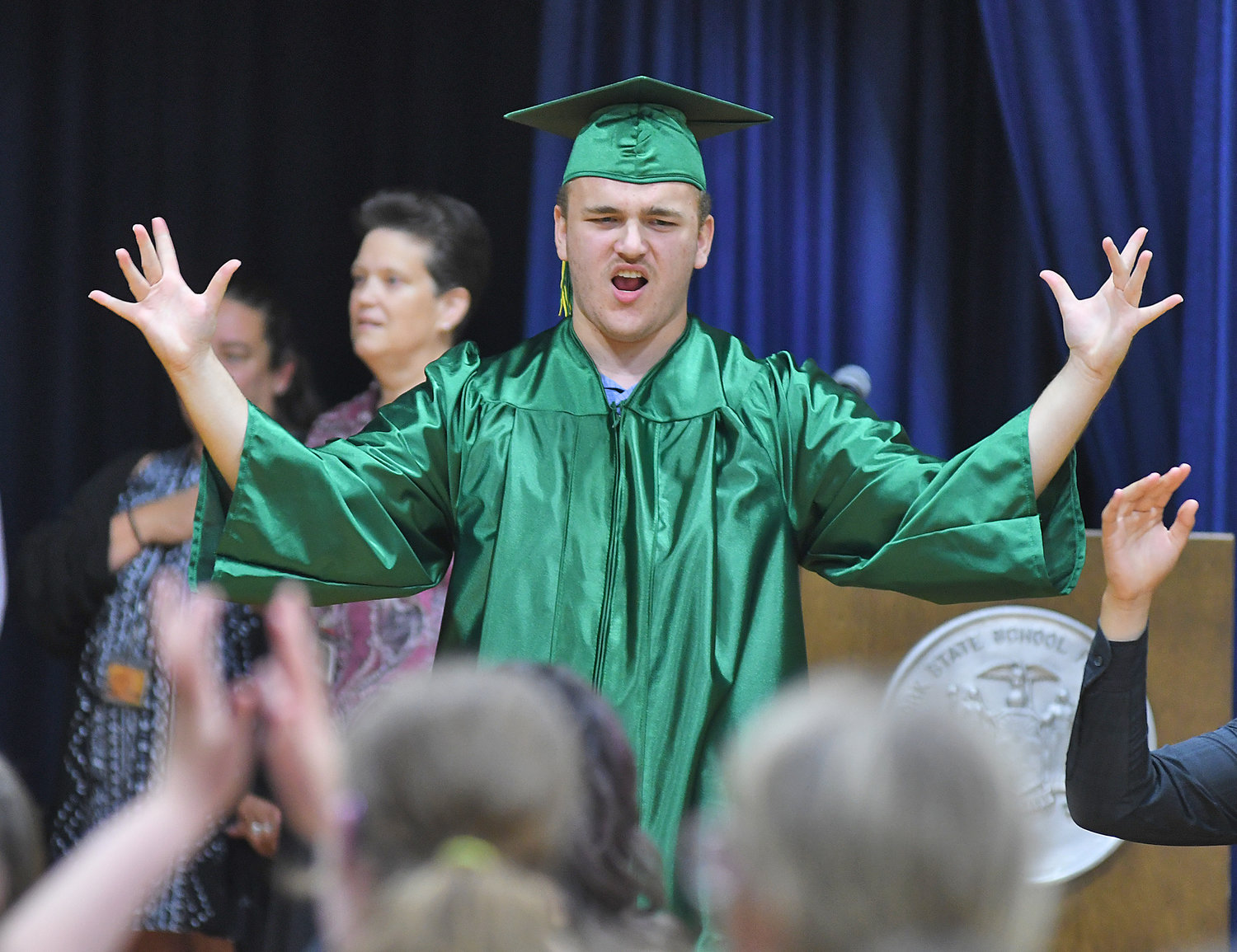 Senior Cody Sharpsteen, of Rome, signs the National Anthem during the New York State School for the Deaf commencement ceremony Friday. He plans to attend Gallaudet University in Washington, D.C. in the fall.
(Sentinel photo by John Clifford) 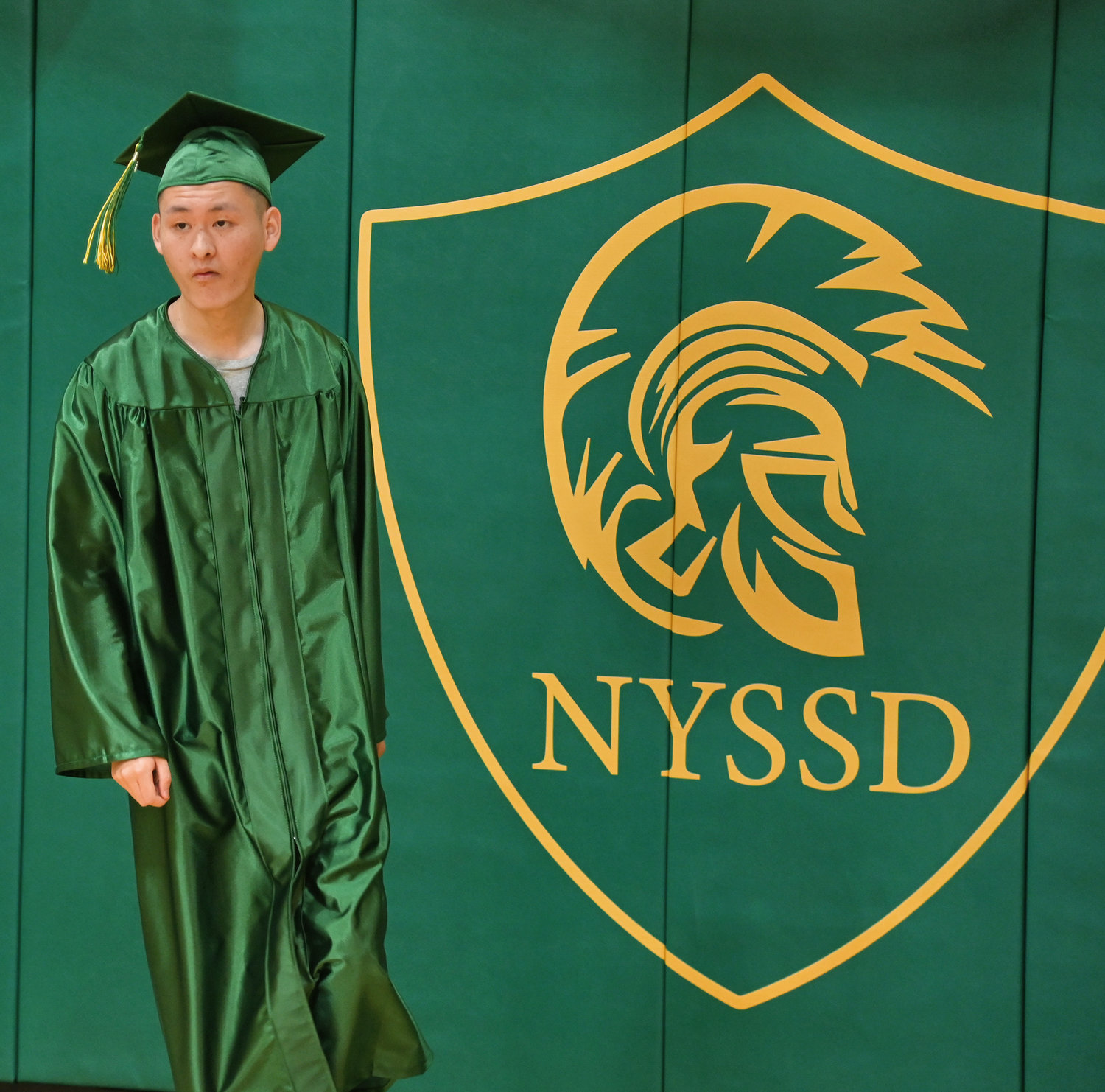 New York State School for the Deaf senior Evan Hawkins, of Canastota, takes part in the procession of the school’s Class of 2022 graduation ceremony Friday. He plans to attend Monroe Community College in Rochester in the fall.
(Sentinel photo by John Clifford) 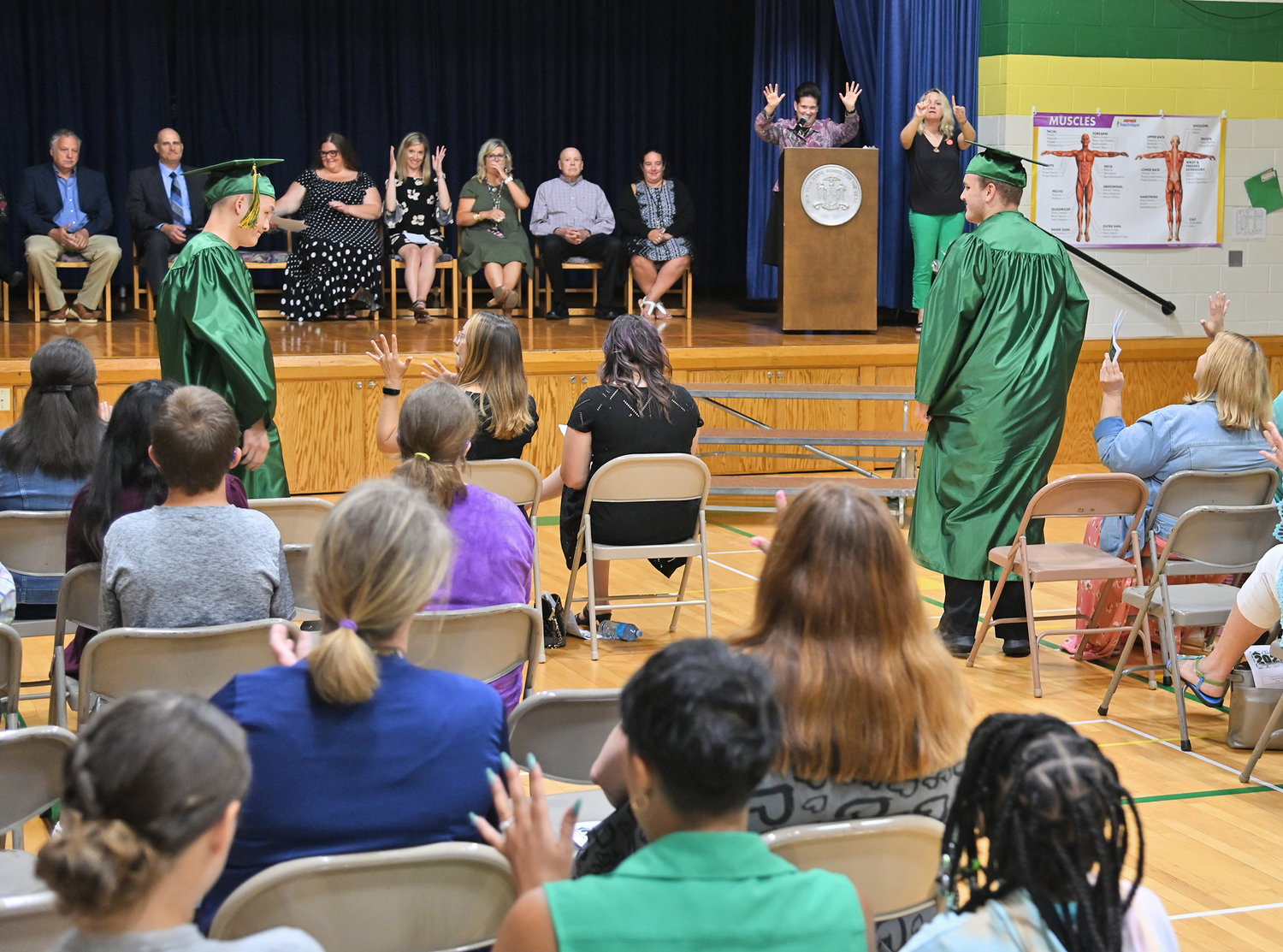 ROME — With themes of hope, perseverance and living life to its fullest, teachers, administration and staff at the New York State School for the Deaf sent two graduates out into the world for future success during Friday’s Class of 2022 graduation ceremony.

NYSSD Interim Superintendent Kara Shore welcomed students, families and guests, stating how excited she was for the two graduates who started out at the school as young children, and were leaving as young men.

She described Sharpsteen as a student with a passion for history and desire to experience the world and personally see beyond “what his history book has to offer.”

Shore then shared that Hawkins has the dream of becoming a chef in New York City.

“When I look at these two young men, I see hope,” said Shore. “That is a word we like to use here at the school every day so that we understand that with hope, all things are possible.”

Shore also described Hawkins and Sharpsteen as students who were not only dedicated to their school, but also contributed greatly to the community as a whole, calling them an “inspiration.”

When sharing his senior words, Hawkins said he was born in China and adopted by his family in Canastota at age 7.

He began as a student at NYSSD in September 2010. While he had difficulty communicating at first, Hawkins said the supportive teachers and staff helped him and became very supportive. While enjoying to cook for his fellow students, Hawkins enrolled in the Culinary Arts program offered through Madison-Oneida BOCES.

“NYSSD is like a family,” Hawkins said. “I want to thank my family, my teachers, dorm staff, and my friends. You all helped me learn and grow.”

Hawkins will attend Monroe Community College in Rochester in the fall, where he will major in culinary arts.

In sharing his senior words, Sharpsteen said his family has a strong history at NYSSD, with his father graduating in 1983, and his aunt Christy in 1984. His grandmother had also worked as an assistant teacher, and his mother works in the dormitory.

Sharpsteen said he enjoyed participating in soccer, basketball and softball, and loved learning about his favorite subject, history, with his former teacher Harry Baran. He was also known to enjoy writing stories and poems, and play Scrooge in “A Christmas Carol” at NYSSD.

“I want to thank all the teachers because they had a good time with me. They taught me how to look into the world,” said Sharpsteen. “My parents inspired me to follow my heart, not my disability, because I am the future for the Deaf community.”

Sharpsteen will attend Gallaudet University in Washington, D.C. in the fall and major in world history.

Long-time teacher Vicky Stockton, who is now retired, served as commencement speaker, and started her speech by teaching the audience the signs for “stand” and “sit.” She then went on to share four personal stories, including how she came to teach in Rome, that gave the graduating seniors inspiration to say, “Yes,” to taking a chance on the unknown.

While life “is not easy for deaf people,” Stockton encouraged the two graduates to “look on the inside,” and to continue working hard through the difficult times, before presenting both with gifts that symbolized their past, present and future success.

“Be yourself, enjoy life, tell your story and go out and make your own dreams,” she advised.

NYSSD Board of Visitors Roman Kazragis encouraged the graduates to always look with an open mind, be willing to try new things and always be inspired to learn something new.

With all that was learned throughout their years at NYSSD and what is yet to come, “You have to raise your voice,” said Kazragis. “Never give up and leave a situation. Do not quit, and you guys have got this.”

The ceremony concluded with the presentation of diplomas and the signing of the NYSSD alma mater, “Carissima.”

2022 Senior Awards are as follows:

• Certificate of Achievement Award from Senator Joseph A. Griffo.

• Student of the Quarter for the third quarter of the 2021-22 school year from the Culinary Arts Program and Madison-Oneida BOCES.