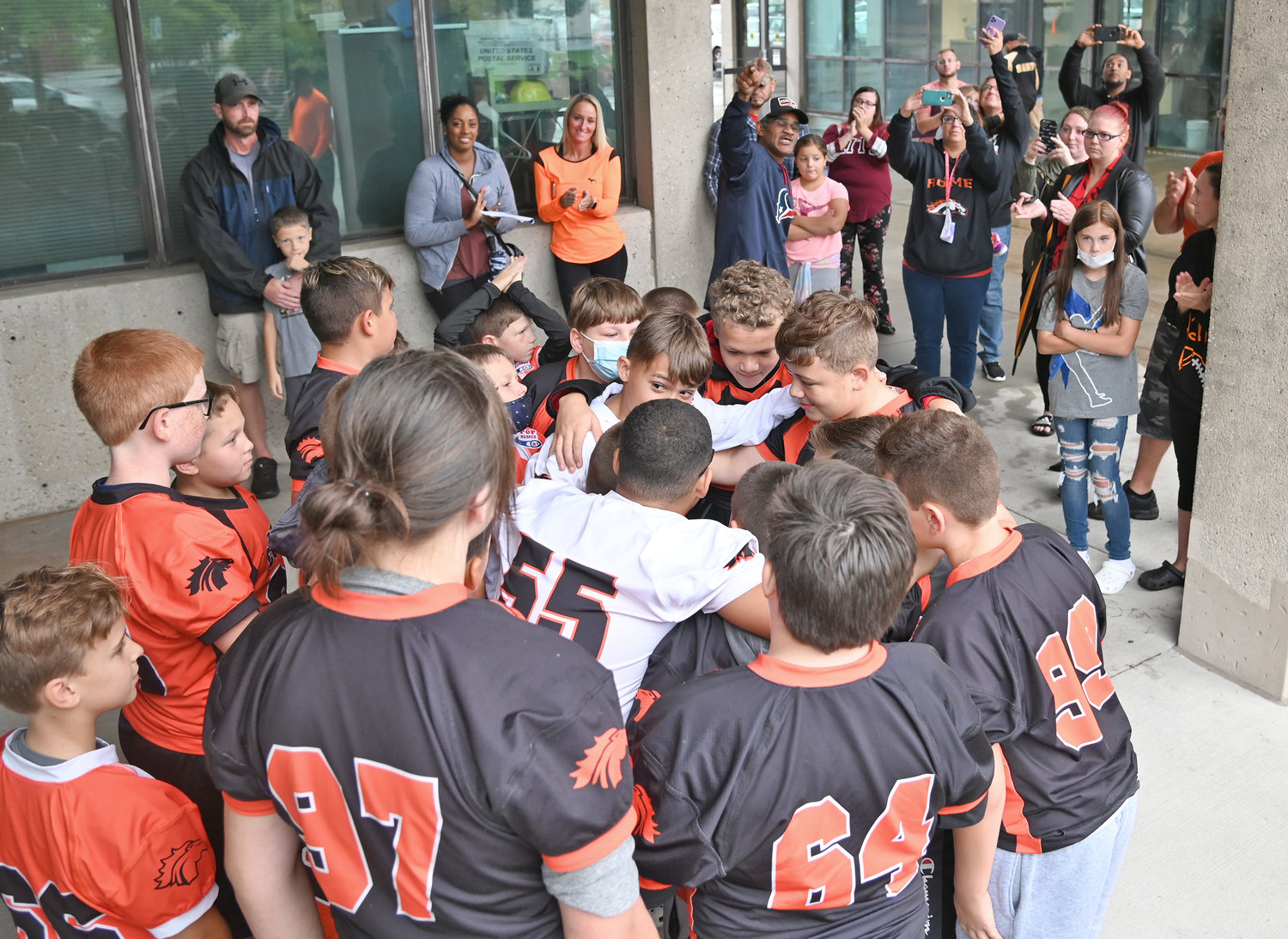 FOOTBALL ON HOLD — Members of the Rome Colts 12U football team huddle up outside City Hall Sept. 23 in hopes that someone would listen to their pleas to be allowed to play again. A fight between spectators at a Rome Colts Pop Warner football game on Sept. 19 is under investigation by law enforcement. As a result of the fight, tackle football has been suspended in Rome for the rest of the season.
(Sentinel photo by John Clifford) 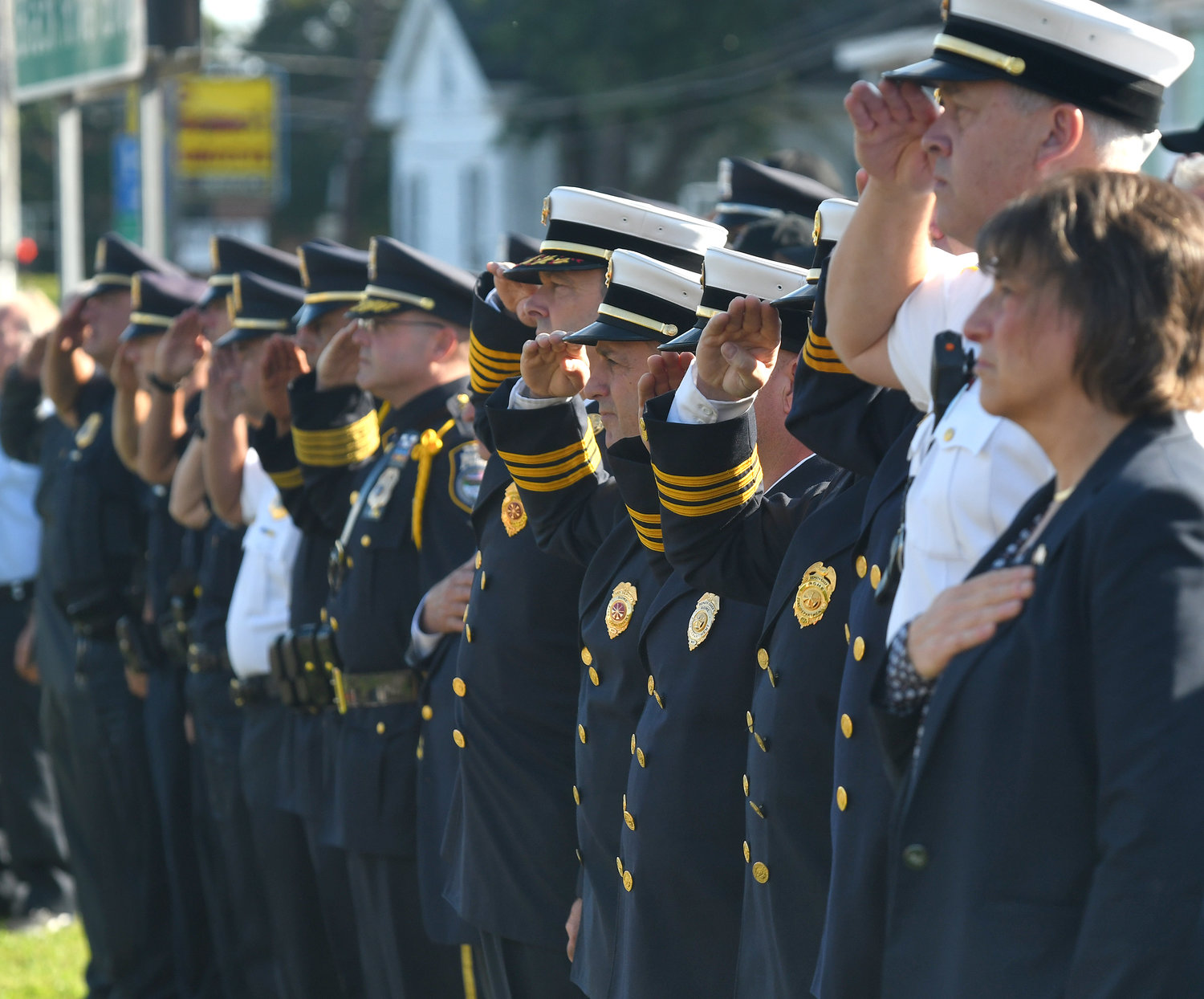 SALUTE — Members of the Rome Fire Department and Rome Police Department, along with Mayor Jacqueline M. Izzo, salute during the national anthem at the 9/11 remembrance ceremony in Rome.
(Sentinel photo by John Clifford)
Previous Next
Posted Saturday, January 1, 2022 3:10 pm

The Daily Sentinel takes a look at the top stories of 2021 that shaped our year.

2nd — New York lawmakers voted to extend an eviction moratorium for tenants who fell behind on their rent because of hardships caused by the COVID-19 pandemic. Gov. Kathy Hochul, a Democrat, called the Legislature to return for an “extraordinary session” with a goal of putting evictions on hold until Jan. 15.

3rd — With the recent closure of Staley Elementary School, 620 E. Bloomfield St., because of the August flooding, school district officials have to revamp many of the district’s elementary school bus routes.

4th — The Rome City School District Board of Education unanimously approved a resolution to affirm the damage to Staley Elementary School, 620 E. Bloomfield St., would cost more than $4.3 million to repair during a special meeting of the board.

5th — The Oneida Carry was only one to four miles long. But the new $500,000 sculpture, which depicts it, traveled more than 2,000 miles, from Arizona to its new site in the 300 block of West Dominick Street.

6th — One Pull Wire and Cable, 7500 Cold Point Drive, received a First Dollar of Profit Award from the Rome Area Chamber of Commerce during a ribbon-cutting ceremony at the customer-centric marked and bundled cable manufacturer.

7th — Representatives from the state Department of Education, comptroller’s office and attorney general’s office were meeting today with Rome City School District officials to discuss concerns with the roof at Rome Free Academy, which has been receiving repairs since it was reported to be at the point of failure on the 20-year-old building this spring.

9th — Derek Jeter was simply Derek Jeter on his special day — smooth as silk. On a cloudy afternoon with the temperature in the 70s and a few sprinkles in the air and adoring fans chanting his name, the former New York Yankees star shortstop and captain was inducted into the Baseball Hall of Fame after a long wait necessitated by the pandemic.

10th — A longtime dilemma resulted in a lengthy discussion for the city’s Common Councilors at their meeting — whether the ice fees at the J.F. Kennedy Civic Arena are having a chilling effect on youth participation in the Rome Youth Hockey Association.

11th — At a somber event hosted by The Genesis Group at Hart’s Hill Inn in Whitesboro, the 20th Anniversary 9/11 Prayer Breakfast memorialized the Sept. 11, 2001 terrorist attacks, and honor those impacted by the tragic events. The event was an opportunity to come together to honor and remember those in law enforcement, fire fighters, emergency responders and the military.

12th — Rome Fire Lt. Brian Townsend was named this week as the Firefighter of the Year by the Oneida County Fire Chiefs Association. Townsend, a 15-year veteran of the department, was honored for his rescue efforts in a boat collision on Fourth Lake in Herkimer County in September 2020.

13th — An upstate New York hospital will stop delivering babies later this month, in part because of employee resignations over a requirement they be vaccinated against COVID-19. Six maternity staff members resigned from Lewis County General Hospital during the past week, worsening an existing staff shortage.

14th — State Sen. Joseph A. Griffo, R-47, Rome, together with Assemblywoman Marianne Buttenschon, D-119, Marcy, met with members of the school district and their advisers last week at Rome Free Academy — where the lawmakers could see for themselves the impact of premature failure of the RFA roof.

17th — The Rome Free Academy football team took a 15-8 lead over host Henninger High of Syracuse into halftime in Syracuse and used it to power the team to a 30-24 league win for its first of the season.

18th — One man is dead after being shot with a shotgun in a domestic dispute between brothers, according to law enforcement officials. The accused gunman, 27-year-old Matthew E. Westcott, is in custody for murder, state police said. This is the first homicide in Oneida County outside of Utica this year.

19th — Republicans and Democrats on an independent commission tasked with drawing new political maps instead drew criticism when they failed to agree on what they should look like and released competing versions. The state’s loss of a congressional seat based on the most recent census date — from 27 to 26 — means a district will disappear.

20th — A second brother has been charged in connection with the murder of James E. Westcott at the family home on Route 69 in Annsville, according to the New York State Police. Michael E. Westcott, age 31, is accused of stabbing James repeatedly in the back of the head with a large knife after their other brother, Matthew E. Westcott, age 27, is accused of shooting James in the face with a shotgun.

21st — The 25th annual Madison County Hop Fest is a celebration of the past, present, and future of the local hop industry. The event started at the Oneida Public Library with a movie and presentations by local hop history experts.

23rd — For the fifth consecutive year, there will be no general property tax increase in the city’s proposed $45.7 million 2022 budget presented by Mayor Jacqueline M. Izzo to the Common Council. The spending plan, which will now be scrutinized by councilor’s who can, by charter, eliminate but not add expenses to the budget.

24th — A fight between spectators at a Rome Colts Pop Warner football game is under investigation by law enforcement. As a result of the fight, tackle football has been suspended in Rome for the rest of the season, according to Tri-Valley Pop Warner officials.

25th — City councilors voiced overwhelming support for a 0% real property tax increase for the fifth consecutive year in the proposed $45.7 million city budget for 2022, that also calls for no increases in refuse, sewer and water rates. Mayor Jacqueline M. Izzo presented the fifth budget of her administration to the Common Council.

28th — After having to pause for a year due to the coronavirus pandemic, the Rome Fire Department will once again be opening the Central Fire Station for school tours as part of National Fire Prevention Week.

29th — As part of continuing efforts to vaccinate residents from the coronavirus, Oneida County Executive Anthony J. Picente Jr. has announced that booster doses of the Pfizer-BioNTech COVID-19 vaccine will be available to eligible residents beginning this week at a pair of county operated sites.

30th — A $40 million modernization of the Office of Mental Health’s Central New York Psychiatric Center and Secure Treatment and Rehabilitation Center campus in Marcy, is underway, according to an announcement from Gov. Kathy Hochul’s office.