Top Rank on ESPN returns to Turning Stone Resort Casino on Saturday, Jan. 14, to kick-off a massive year of boxing in Upstate New York with a high-powered heavyweight doubleheader. 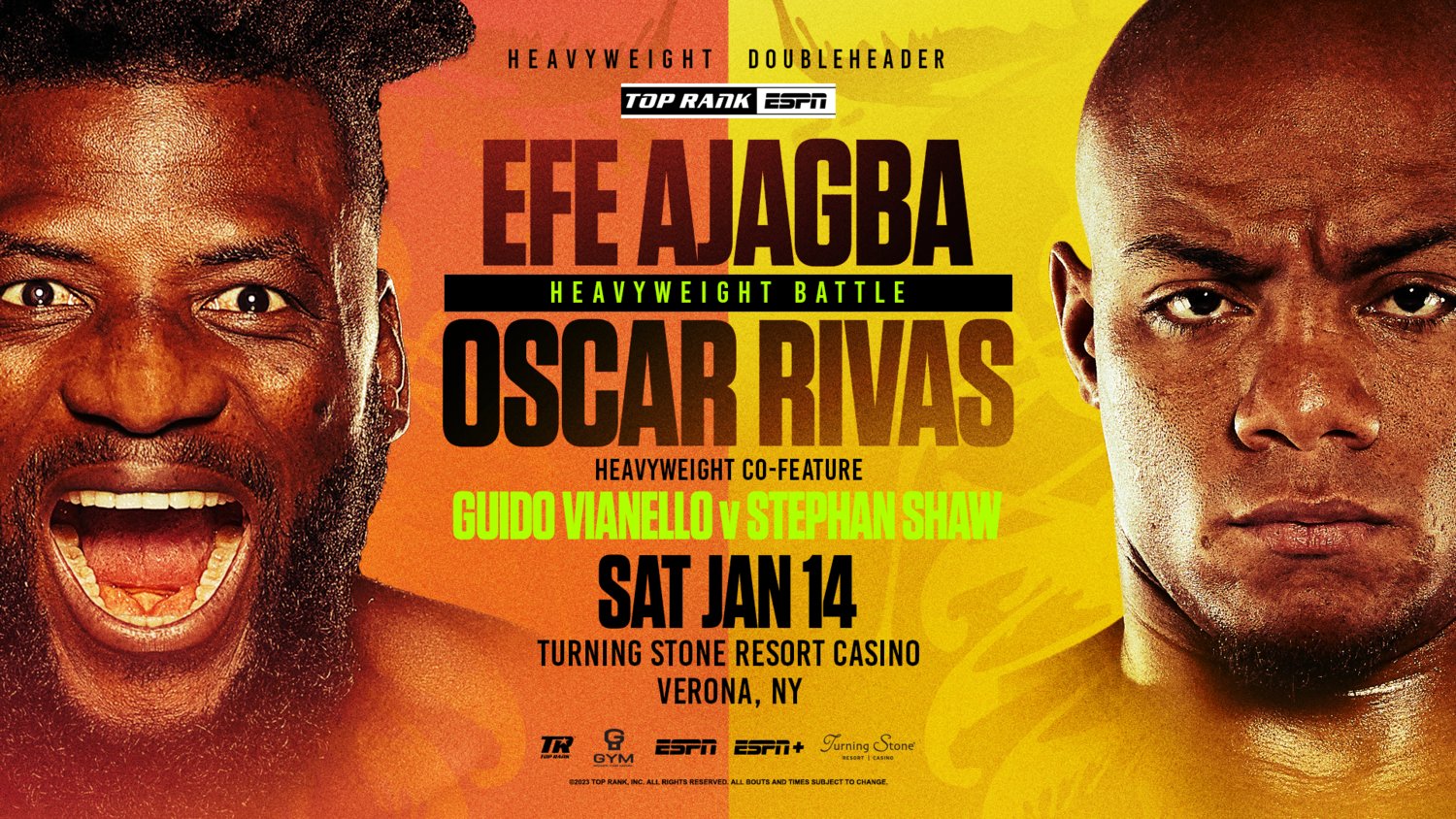 VERONA — Top Rank on ESPN returns to Turning Stone Resort Casino on Saturday, Jan. 14, to kick-off a massive year of boxing in Upstate New York with a high-powered heavyweight doubleheader.

The 10-round main event is a battle of big-punching Olympians, as Efe “The Silent Roller” Ajagba looks to author a signature win over Oscar “Kaboom” Rivas. In the 10-round co-feature, 2016 Italian Olympian Guido “The Gladiator” Vianello takes a seismic step up in class against fellow unbeaten Stephan “Big Shot” Shaw.

Ajagba-Rivas and Vianello-Shaw will be broadcast live on ESPN, ESPN Deportes and ESPN+ at 10 p.m. Undercard bouts will stream live and exclusively on ESPN+ and includes a 10-round junior lightweight tilt between Adam “BluNose” Lopez and Abraham “El Super” Nova. Promoted by Top Rank, in association with Groupe Yvon Michel (GYM), tickets priced from $49 to $89 go on sale Friday, Dec. 2, at 10 a.m., with pre-sale for TS Rewards Members on Thursday, Dec. 1, and can be purchased at the Turning Stone Resort Casino Box Office, charge by phone by calling 800-771-7711 or online at Ticketmaster.com.

“The heavyweight division is loaded with talent, and we have two 50/50 matchups that will see a pair of contenders emerge at Turning Stone,” said Top Rank chairman Bob Arum.

Ajagba (16-1, 13 KOs), a 2016 Nigerian Olympian, quickly established himself as one of the division’s heaviest hitters following his pro debut in July 2017. He tallied six first-round knockouts in his first eight bouts, using his 6’6 frame and sledgehammer right hand to dispose of his opposition.

Last April, Ajagba utilized his right hand to blast out Brian Howard in a Knockout of the Year contender. Following an October 2021 decision defeat to Frank Sanchez, Ajagba had surgery on both his elbows, returning in August to stop Hungarian veteran Jozsef Darmos in the second round.

“I am injury-free and ready to show the world what I can accomplish when I am 100 percent,” Ajagba said. “I respect Oscar Rivas for accepting the challenge. We will give the fans a great show, but I will be victorious on Jan. 14.”

Rivas (28-1, 19 KOs) is a 2008 Colombian Olympian who moved to Montreal in 2009 to start his professional career. He notched his signature professional victory at Turning Stone in January 2019, knocking out former world title challenger Bryant Jennings in the 12th round.

His only blemish came six months later when he traveled to England and dropped a unanimous decision to Dillian Whyte after knocking Whyte down in the ninth round. Since the Whyte defeat, Rivas has fought twice, knocking out Sylvera Louis in three rounds and outlasting Ryan Rozicki by unanimous decision in an all-Canadian showdown while winning the WBC Bridgerweight title. After multiple prospective bouts fell through, Rivas will enter the Ajagba match coming off a nearly 15-month layoff.

Rivas said, “I'm extremely happy to be back in the ring in Verona where I had a lot of success not too long ago. I'm proud of my WBC Bridgerweight title and will be defending it soon, but this opportunity Top Rank gave us at heavyweight was too good to pass up. I also have a lot of respect for Ajagba, and while I agree with him that it will be spectacular for the fans, my skills and my experience will be the difference.”

Vianello (10-0-1, 9 KOs), the fighting pride of Rome, turned pro with great fanfare in December 2018 and won his first seven bouts by stoppage in three rounds or less. His momentum stalled following a 2020 draw against Kingsley Ibeh and an injury-plagued 2021 that saw him fight once. Vianello came back in July and knocked out Rafael Rios in four rounds. Three months later, he returned home to Rome and had thrilled the local fans with a dominating eight-round decision over Jay McFarlane.

Vianello said, “Stephan Shaw is a good, undefeated fighter, but I fight better when presented with top opposition. I look forward to fighting on ESPN as part of a great heavyweight doubleheader.”

Shaw (18-0, 13 KOs), from St. Louis, Missouri, is one of America’s most talented big men, a 6’4, 235-pound boxer-puncher who has knocked out three of his last four foes. He made his Top Rank debut in January, becoming only the third man to knock out Philadelphia’s iron-chinned Joey Dawejko.

Shaw tallied three knockdowns in just 2:35 to wipe out Bernardo Marquez in July and then preserved his date against Vianello with an eight-round shutout over Rydell Booker on Nov. 22 in New York City. Shaw will receive his nationally televised big break a decade removed from winning U.S. National and National PAL gold medals as an amateur.

“I’m excited. This is my time to shine. This is my moment,” Shaw said. “I’m ready to go out and there and have some fun. I won’t be under the radar after beating Guido. He’s a good boxer, but I am superior. I will prove that on Jan. 14.”

Nova (21-1, 15 KOs), born in Puerto Rico and raised in Albany, is returning to the junior lightweight ranks after briefly testing the featherweight waters. Last January at Turning Stone, Nova knocked out late replacement William Encarnacion in the eighth round. That knockout led to an ESPN-televised co-feature in June against southpaw Cuban dynamo Robeisy Ramirez at Hulu Theater at Madison Square Garden.

After four competitive rounds, Ramirez knocked Nova out with a left hand in the fifth. Nova returns to the friendly Turning Stone confines against Lopez (16-3, 6 KOs), a native of Glendale, California, who is making his junior lightweight debut. Lopez last fought in May against Encarnacion, surviving knockdowns in the first and third rounds to eke out an eight-round unanimous decision.

In other undercard action:

Junior featherweight Floyd “Cashflow” Diaz (8-0, 3 KOs), the 19-year phenom who went 5-0 with three stoppages in 2022, will fight in his first scheduled eight-rounder.

Rising junior lightweight Haven Brady Jr. (8-0, 4 KOs), who won four fights in 2022, makes his 2023 debut in an eight-rounder against an opponent to be named.