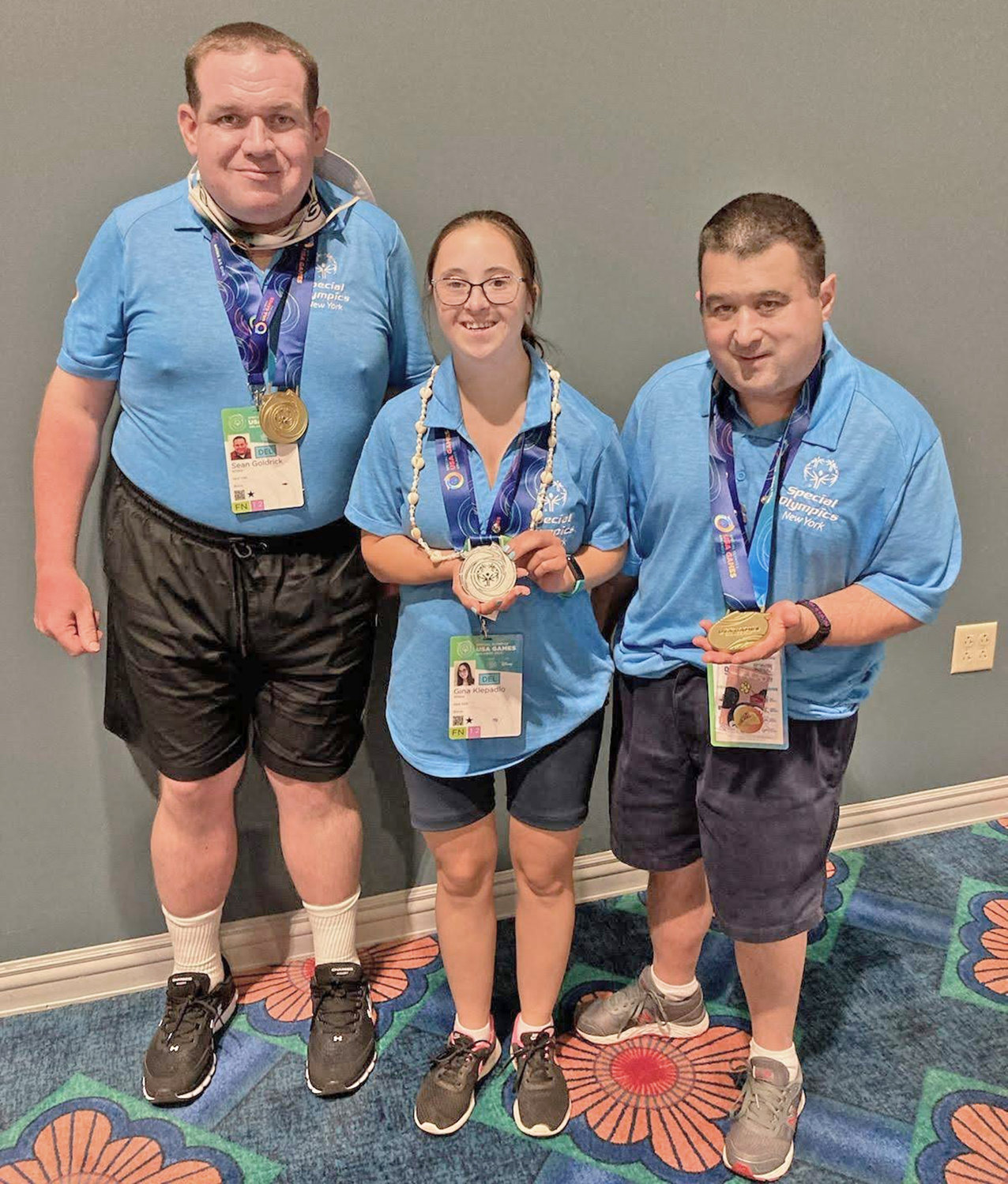 Three of the 12 bocce players representing New York state in the Special Olympics USA Games were from Oneida County. From left: Sean Goldrick of New Hartford and Gina Klepadlo and Paul Amoroso, both of Rome. Each came home from the event in Florida earlier this month with at least two medals, and all three won gold.
(Photo submitted)
Posted Thursday, June 23, 2022 9:27 am
Steve Jones
Sports writer
email / twitter

Three local bocce players were part of a contingent of a dozen from New York state to compete in the Special Olympics USA Games the first week of June. Romans Gina Klepadlo and Paul Amoroso and Sean Goldrick of New Hartford all won multiple medals in Orlando, Florida.

Klepadlo, who is 31, was competing in her first USA Games. “It was a great opportunity,” she said. “I was super excited. I was so proud with all my teammates.” And despite an indoor surface that was more artificial turf than the clay she and her teammates are used to at the Toccolana Club in Rome, “I was very happy,” she said. “I was not nervous.” Even with the big crowds, she said, “I never noticed.”

And she proved she was ready to win right away. Klepadlo had only competed in team events before this, so starting in singles competition could have been tricky. Instead all she did was win gold in her first event. “I was super proud.”

Her mother Carol said she and her husband Eugene had to get used to the clear delineation between the coaches and the fans, since they’re used to offering advice along with cheering. “We were just basically spectators,” she said of the six parents of the local athletes. She already knew Paul’s parents — Jerry and Sue — and Sean’s parents — Tony and Terry — from the Toccolana Club.

“It was incredible. To be selected, first of all,” said Carol Klepadlo. Notification came in May 2021 that Gina would be competing in her first Special Olympics at this level. “The excitement, the pride, the tears, the camaraderie among teammates,” some of whom didn’t know each other before playing in Florida. “It was so awesome.”

Klepadlo also swims and plays golf at the state level. She also competes in track and field, basketball and bowling. Her favorite? Golf, she said, because of the skill required and the fact that it’s an individual sport.

But this was a new level, she said. “The competition was very tough.” Her mother agreed. “The pride is over the top. To see her place with gold competing against teams from different states. It’s one thing to play local.”

“I was very proud of my teammates. We cheer for each other,” Klepadlo said. The rallying cry for the New York bocce players was “New York Strong!” she added.

She said her best quality in bocce is that “you have to stay focused,” to visualize the throws before you make them and know what needs to be done. And in non-individual events, “You have to talk to each other.” She said it also helped to have met and played with some of her teammates already.

But it wasn’t all bocce, all the time. “You meet everybody, and all the cultures as well.” She added: “I have great memories” of the trip, not just the competition. “Great food, great music.” They got to watch a Harlem Globetrotters game too.

Besides the singles gold, Klepadlo won a silver medal in doubles. Her team finished fifth.

Paul Amoroso, 48, has experience with bocce at a high level. He competed in the Special Olympics World Summer Games in Ireland in 2003.

He also participates in golf, swimming, track and field, bowling and has, in the past, participated in equestrian, cross country skiing and basketball.

How did he feel leading up to the USA Games? “Great. A little nervous.” But he loves bocce, he said. “It makes me feel good.”

But at the USA Games, Paul medaled in all three formats. “I brought home the gold,” he beamed. Amoroso won bronze in singles, partnered with Goldrick for gold in doubles and won another bronze in the team event (which included Goldrick).

“It was exciting,” said Jerry Amoroso. “We were a little concerned. Nine days is a long time. But he did well.” He also complimented the coaches for their preparation and efforts at the Games. Many of the local athletes were a little rusty leading up the Games because the pandemic had limited their access to facilities over the past two years, he noted.

Amoroso said he liked being a partner and teammate with Goldrick. The friendships and meeting new people are some of his favorite parts of these competitions, his parents noted. “He’s a very social person. Sometimes he has to focus on what he’s doing. And since he hadn’t seen so many people in so long,” his mother said, he had plenty of potential distractions. “He was focused and he concentrated and worked well,” his father said. All the team members had nicknames during the Games. “He was the mayor,” Sue noted. With a nickname like that at an event that stresses socializing and inclusion, sometimes the excitement off the court can be more of a challenge than the bocce itself, the Amorosos added.

But being well known is nothing new for Amoroso, who worked in the breakfast room at The Beeches in Rome for 21 years and got to know so many people around town that way.

The family said the events surrounding the Games were also memorable. “The opening ceremonies were awesome. They were just amazing,” Sue said. And while time outside the venue and competition was limited, they got to visit Disney’s Animal Kingdom and Magic Kingdom theme parks.

Goldrick took home the same three medals as Amoroso — bronze in singles, gold with Amoroso in doubles and bronze in the team event that included Amoroso.

Goldrick, who turns 42 on Tuesday, also participates in plenty of other sports. He golfs, bowls, competes in track and field and is an equestrian. He has also been in swimming and basketball competitions.

This was his first time in the USA Games. It was, he said, “good,” but he was “a little bit nervous.” Regardless, he said, it was exciting.

It was his first time competing in singles and doubles.”I like playing by myself or with a team. “I like being part of the team.” In addition to Paul, Sean had two new teammates. “They blended well together,” his mother said, noting that they got to practice a bit together in Rome before the Games.

“The coaches were amazing,” Terry said. She credited local coach Bob Van Slyke for his work.

Sean said the best parts of the trip were getting to “win some medals and meet new, different people.”

He also liked having the time outside of bocce to hit the pool and visit Animal Kingdom and Magic Kingdom.

“I want to go again,” Goldrick said. And he said he wants to get better at bocce and be a good teammate so he’s ready to do even better the next time.