Trio having fun together as Utica Comets heat up

A trio of Utica Comets players had one of the more noticeable celebrations Tuesday.

Trio having fun together as Utica Comets heat up 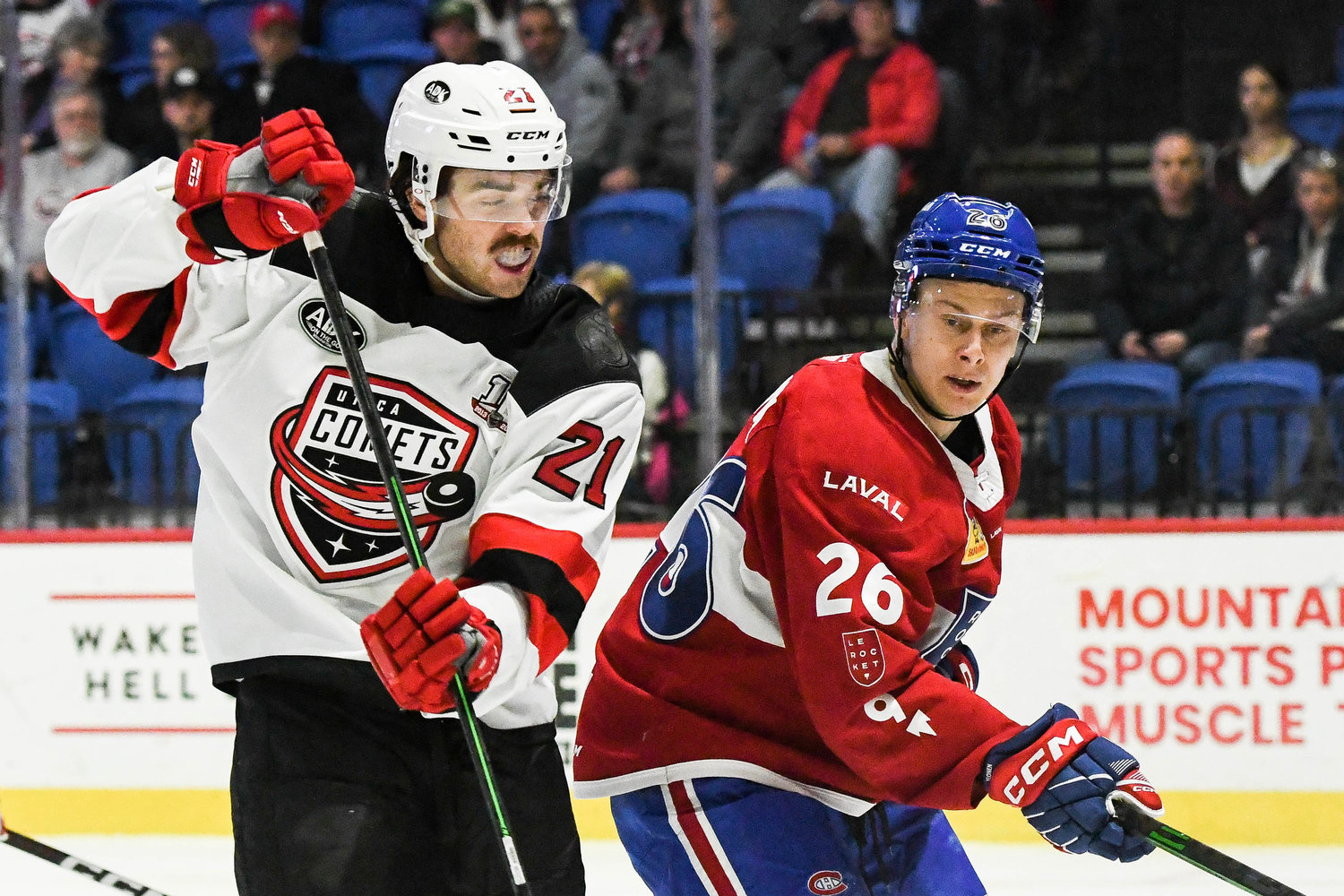 UTICA — A trio of Utica Comets players had one of the more noticeable celebrations Tuesday.

Linemates Nolan Stevens, Joe Gambardella and Graeme Clarke made a solid play during a 3-on-3 practice drill with the nets moved closer together. The three players made sure to acknowledge each other’s efforts.

“We’re having a lot of fun with how things are going right now,” said Stevens who has 13 points in his last 12 games. “We want to keep that rolling, for sure.”

The recent run has pushed Utica up from the bottom of the seven-team North Division to second place.

“I like the composure, intensity and the pressure we’ve applied on opponents,” Comets coach Kevin Dineen said. “I think there’s more responsibility on guys that they’re not only asking for, but we’re listening to. It makes it easier and you’re able to use your whole lineup.”

There are certainly a few reasons for Utica’s recent success. The trio of Stevens, Gambardella and Clarke have played notable roles since being placed together in mid-December.

Clarke (career-best, team-leading 28 points) has put himself in conversation for a possible call-up to New Jersey with 23 points in his last 20 games. Stevens, in his fifth pro season and on an AHL deal with Utica, has a career-best 10 goals and is second on the team in points (23). Gambardella (13 points) is routinely mentioned as a big part of the team’s leadership group.

Stevens said the line complements each other. Dineen noted the trio has been matched up against opposing teams’ top lines.

“It has just been a really fun line to be on, to be honest,” Stevens said. “I feel like it just makes the game easier with having Gam being heavy on the puck and Clarkey just being a high-end talent. I’m just trying to mesh in the middle of those two. It has been a lot of fun for sure.”

“It might also raise the expectations a little bit, too,” Stevens said. “We go into every game now and expect to win. … It has been a whole group effort (recently). It has definitely raised our confidence. But, we don’t forget what got us here in the first place.”

A week ago, Nolan Foote hoped to be the next call-up for New Jersey as a key Comets player. It was during a stretch when he had four goals and five points in four games.

“I feel like I’m doing the little things the right way,” he said during a recent interview with the Daily Sentinel. “I’m trying to help the team as much as I can. I really feel like my development is growing.”

Foote, the son of retired star Adam Foote, got his wish when the Devils announced his recall Tuesday. With the move, New Jersey has 23 players. That means if Nathan Bastian or John Marino come off injured reserve, a move would be needed with a player possibly being sent to Utica.

Entering Tuesday, Foote — who has played a top-six forward role and on special teams — was third on the Comets in points (19) with a team-leading 13 goals in 33 games. He also played center over the last four games.

“He’s got some diversity in his game,” Dineen said Tuesday. “He plays a physical game, which is a priority for him, for me and organizationally. He’s holding up his end of the bargain. He’s playing extremely hard right now. Our record over the last month is a good reflection of how Nolan Foote has played.”

Forward Brian Pinho (upper-body injury) participated in a normal jersey Tuesday. Dineen said the center is closer to a return.

Forward Samuel Laberge (lower-body) has missed the last six games and remains out. Dineen confirmed that Laberge is on a “week-to-week” timeline.

With Mason Geertsen participating at forward again, Utica had 12 forwards at Tuesday’s practice.

The first 1,500 fans at Wednesday’s game will get a bobblehead of Naudie the Comets’ mascot.