The driver of the tractor trailer that slipped off an icy East Dominick Street ramp Tuesday morning was not injured, according to local law enforcement officials. Sheriff’s deputies said Luciano … 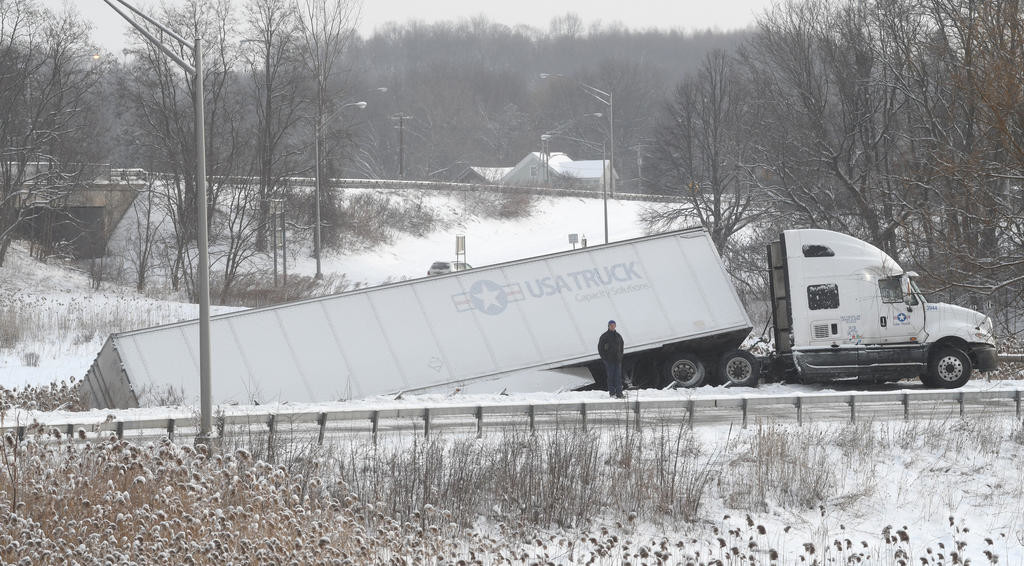 NO INJURIES — Sheriff’s deputies said this crash off Route 365 and East Dominick Street Tuesday morning was caused both by the driver falling asleep and the snowy road conditions. The driver was not injured, authorities said, and was ticketed to appear in court. (Sentinel photo by John Clifford)
Posted Wednesday, February 7, 2018 4:00 pm

The driver of the tractor trailer that slipped off an icy East
Dominick Street ramp Tuesday morning was not injured, according to local law enforcement
officials.

Sheriff’s deputies said Luciano Kanga, 41, of Jacksonville, Florida, was eastbound on Route 365 at about 7 a.m. when he fell asleep behind the wheel of his big rig.

Deputies said the tractor trailer drifted onto the East Dominick Street exit ramp and was going too fast for the snowy road conditions, leading to the accident.

The trailer slid off the roadway and hit the guide rail, knocking down several hundred feet of rail, the sheriff’s department reported.

The trailer then slid down an embankment before coming to rest in the grassy area off of the shoulder of the road.

Kanga was not injured, authorities said. He was ticketed for the crash and is scheduled to appear in City Court.

The ramp was closed for several hours so that the tractor trailer could be pulled out and traffic was redirected, the law enforcers added.