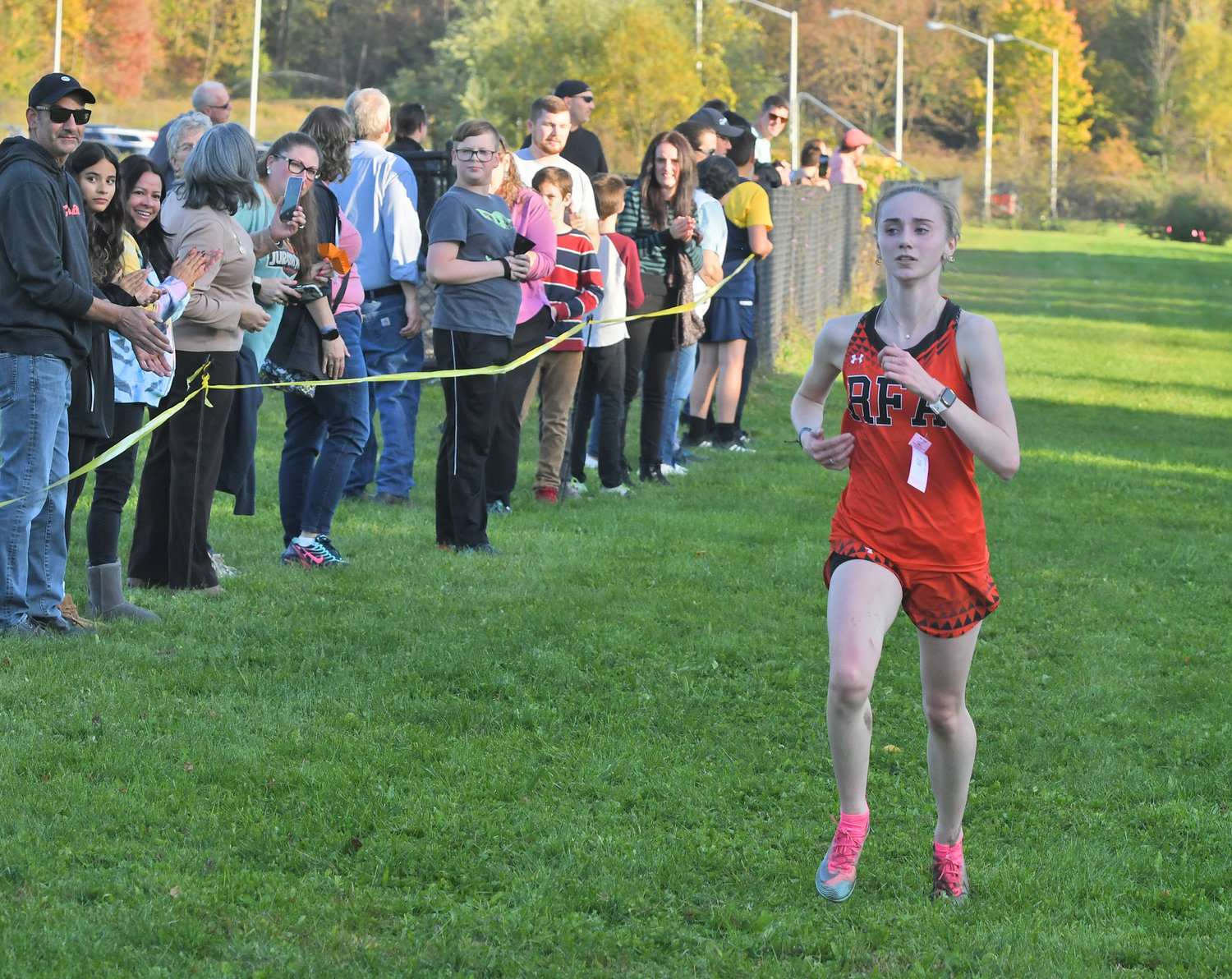 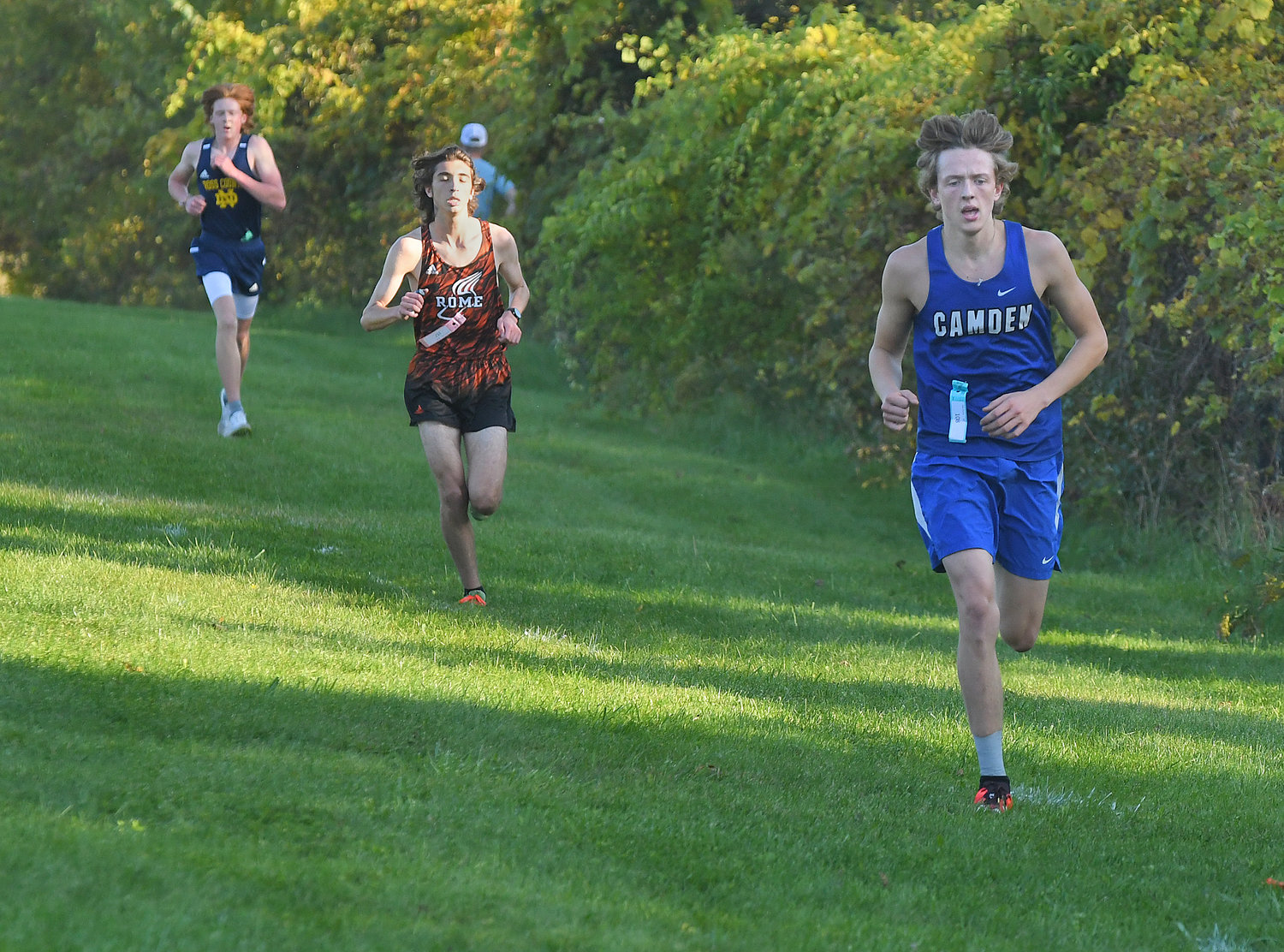 Camden’s Jerome Seidl leads Rome Free Academy’s Carson Campbell at the start of the second lap of Tuesday’s cross country race at RFA. Seidl went on to get the win the race in 18:58.21, with Campbell in second place. RFA defeated both Camden and Utica-Notre Dame in team points.
(Sentinel photo by John Clifford) 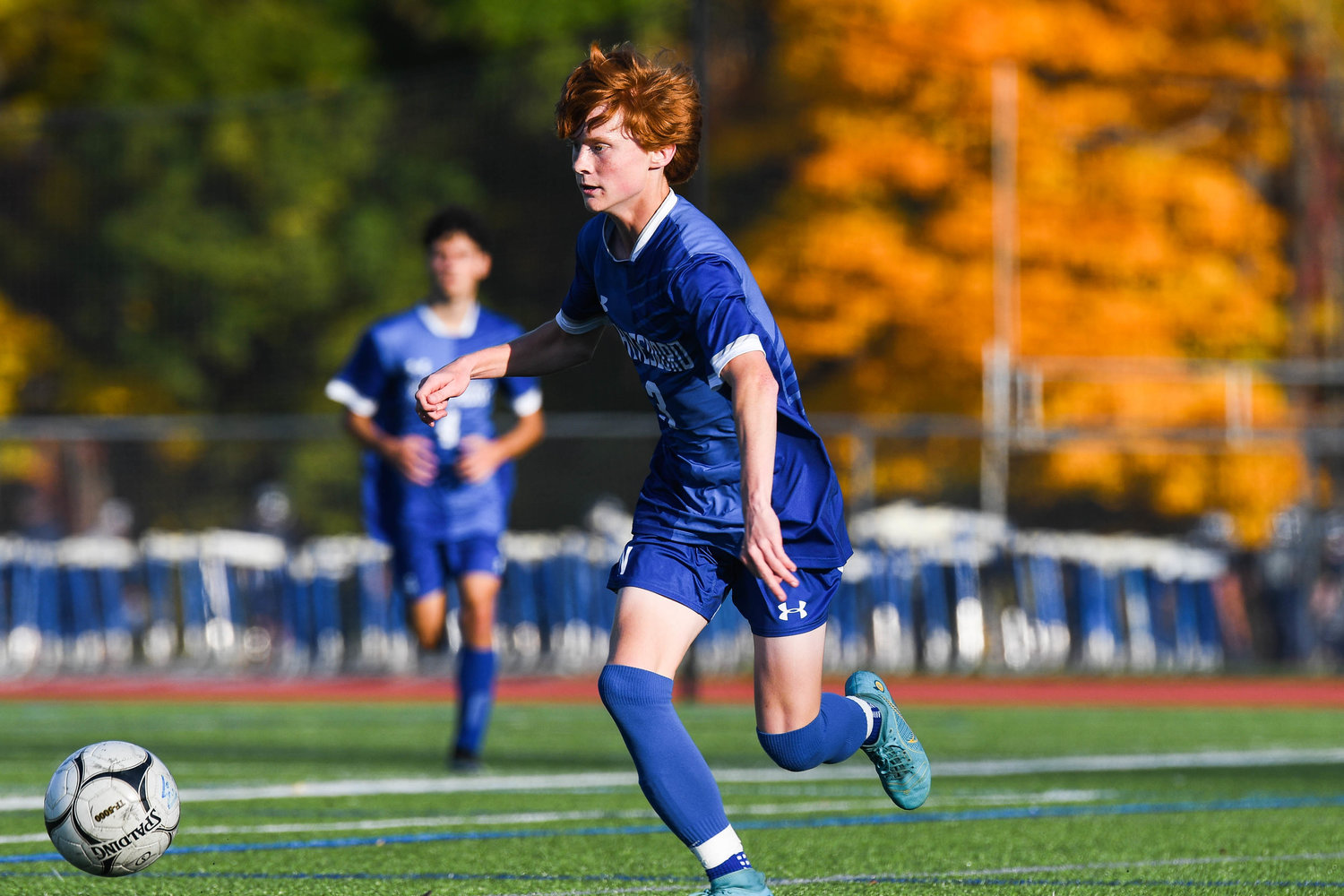 Whitesboro’s Joshua Gorgas moves the ball up the field during the game against Rome Free Academy on Monday, Oct. 11 in Whitesboro. Gorgas had the assist on the Warriors’ lone goal but the hosts lost 3-1.
(Sentinel photo by Alex Cooper) 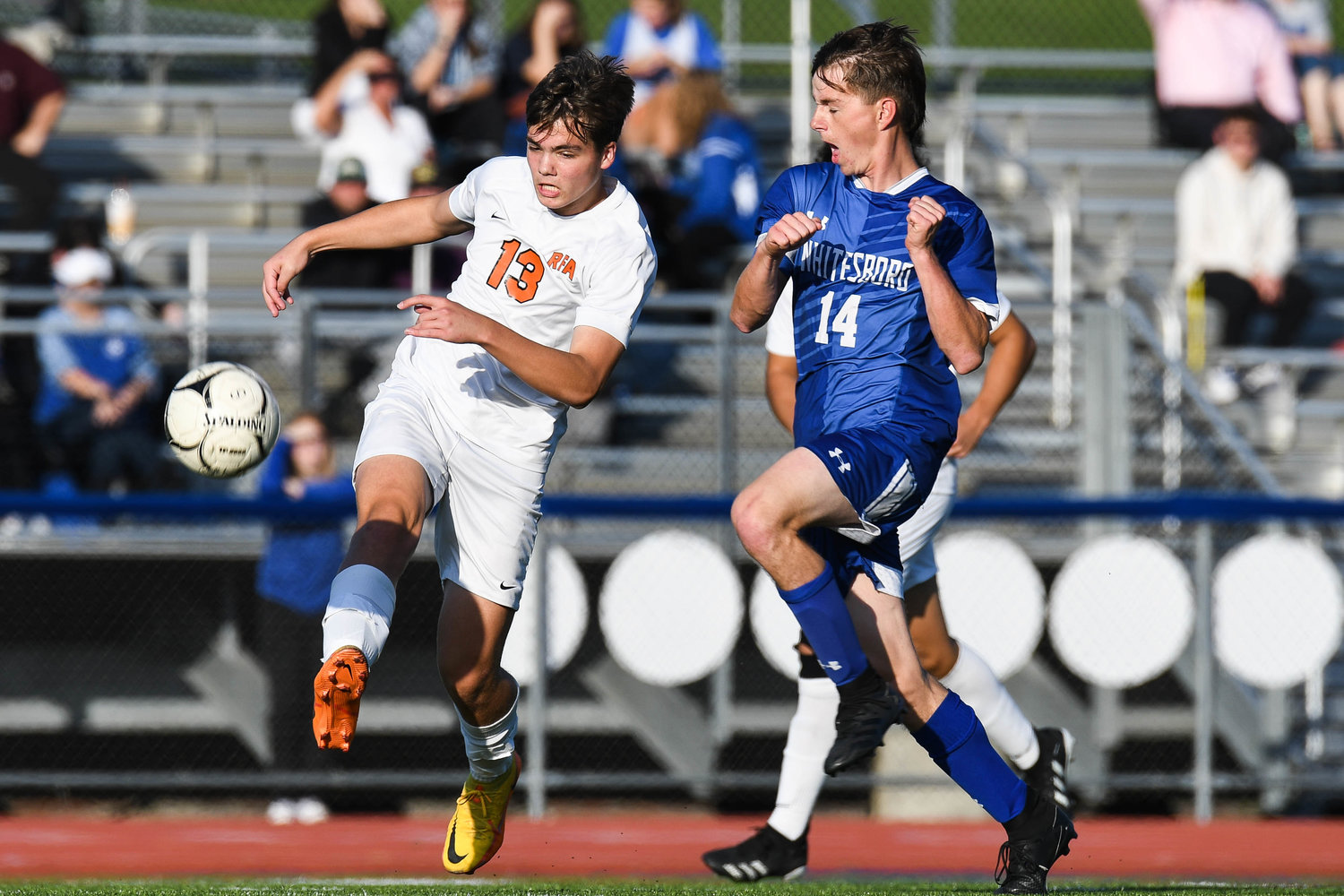 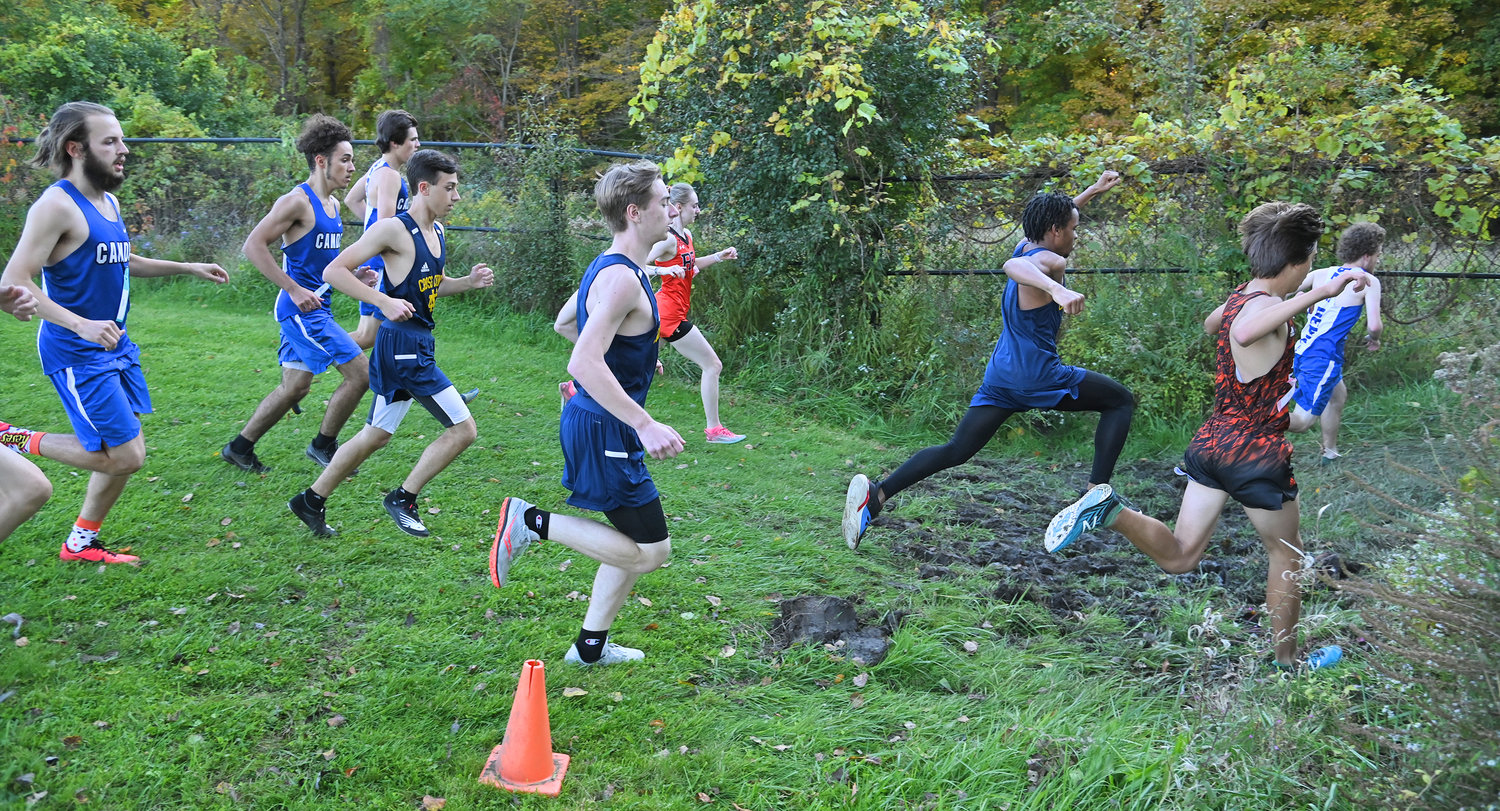 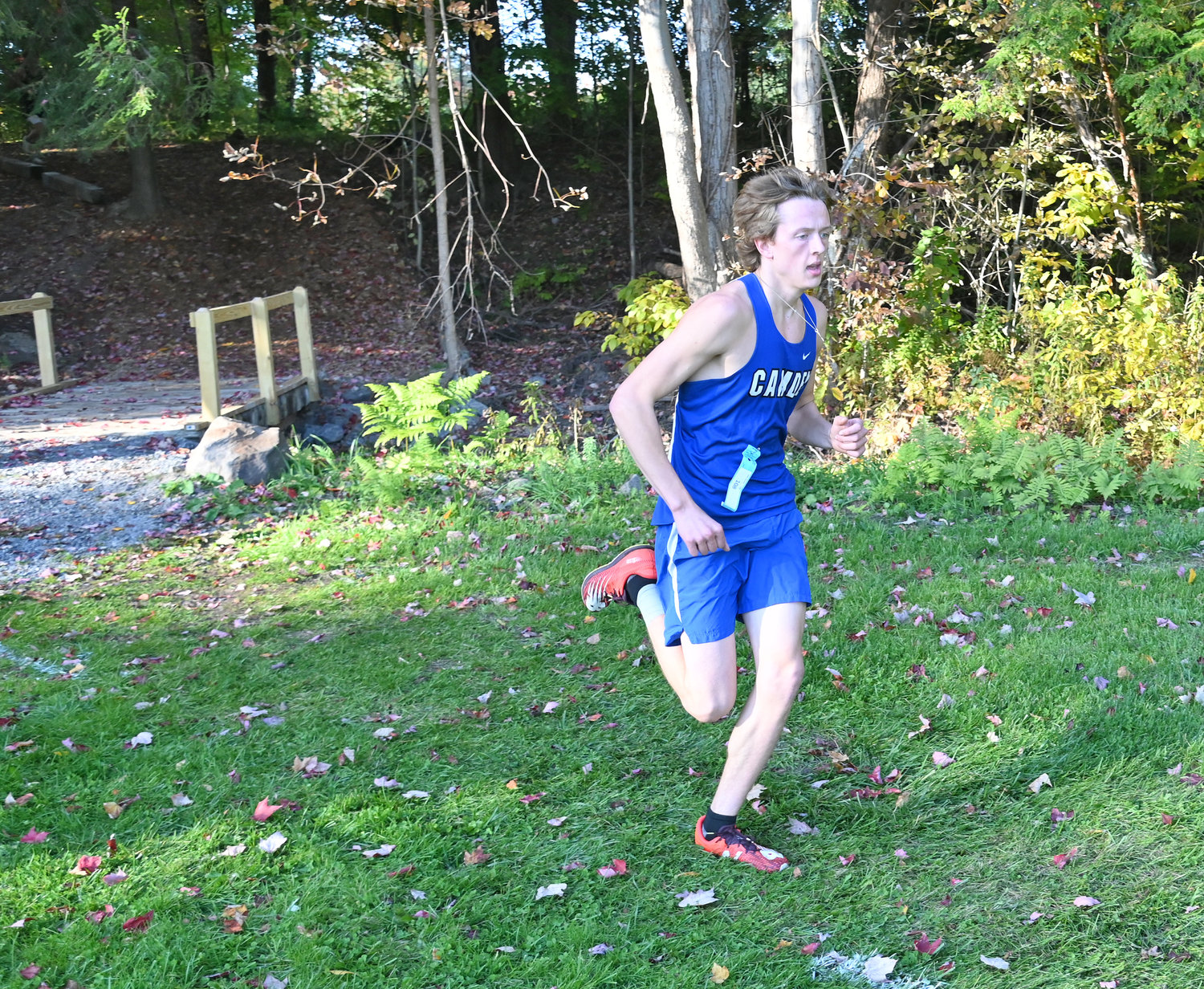 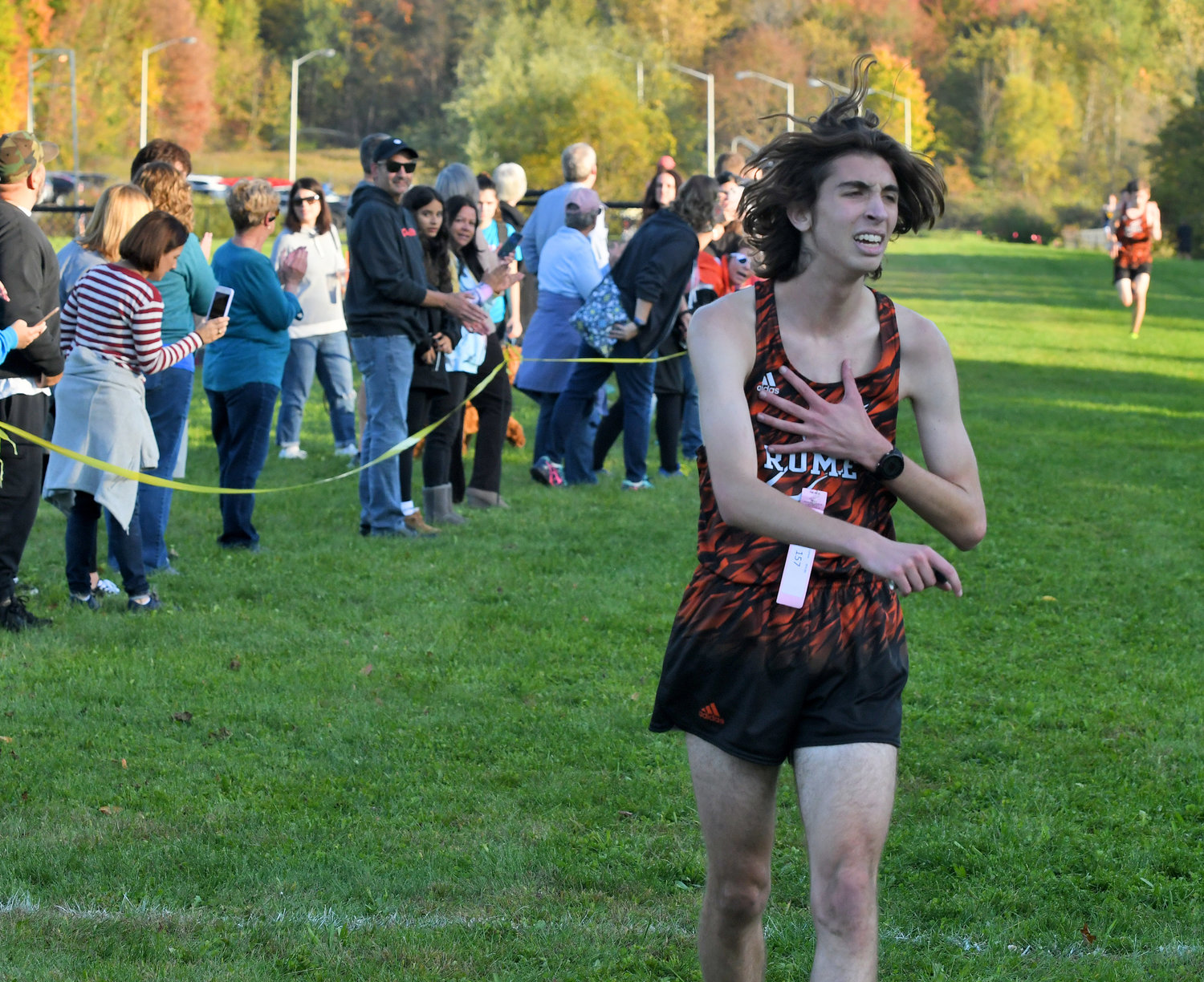 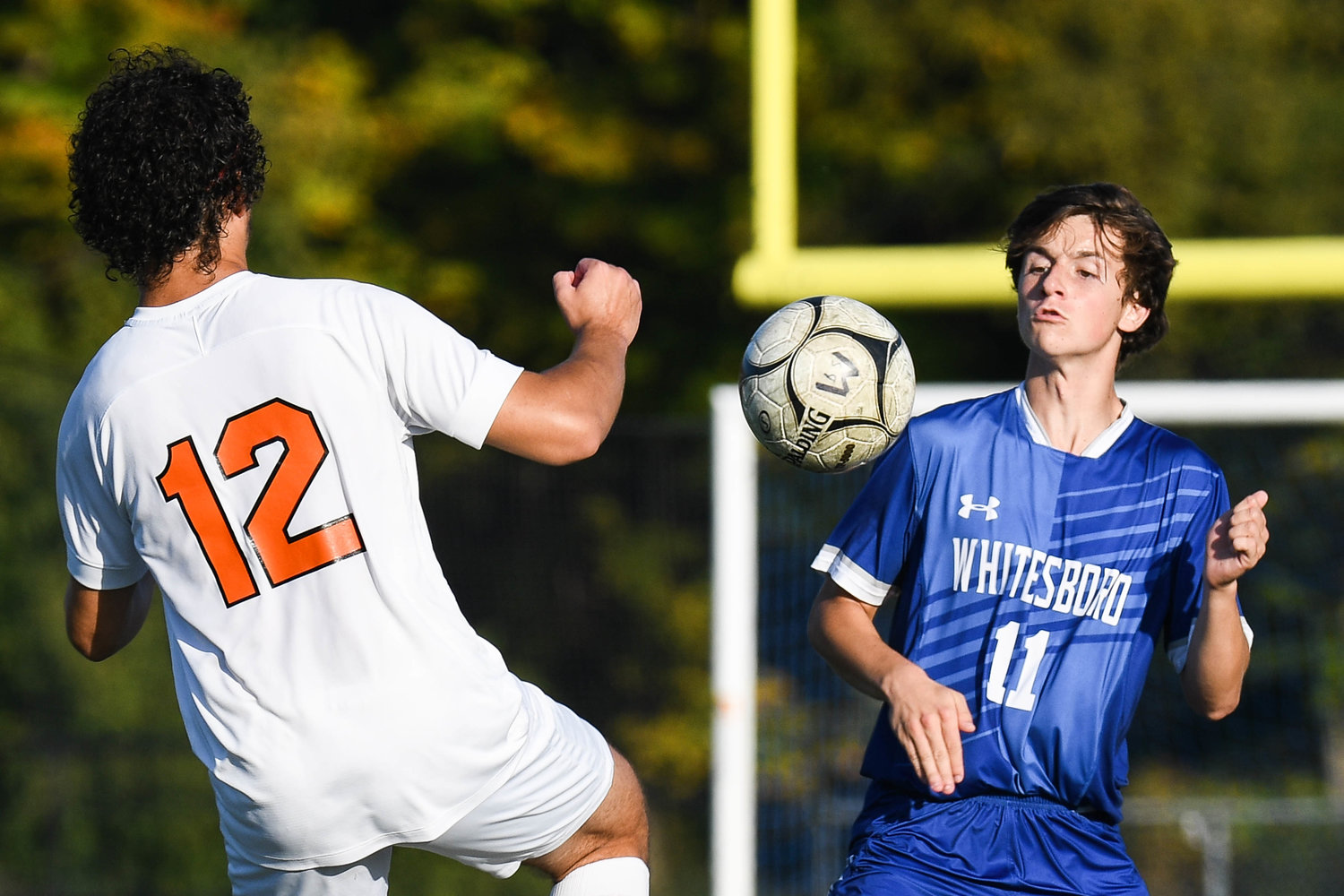 Jerome Seidl of Camden won the boys race in 18:58.21. RFA runners took the next three spots: Carson Campbell in second, Ethan Baker in third and Grady Engelbert in fourth. The rest of the top 10 were (in order) Elijah Jackson of Camden, Jake Engelhart of Notre Dame, Karl vanHoesel of RFA, Ben Rogers of Camden, Andrew Guidera of Notre Dame and Connor Perrotta of Camden.

Whitesboro’s Denis Seferagic scored on an assist from Joshua Gorgas. Kaidan Fischer made nine saves in net for the Warriors.

The game was the last for Whitesboro in the regular season.

VVS pulls away in soccer win

The host Vernon-Verona-Sherrill boys soccer team led 2-1 at the half but added two second half goals for a 4-1 TVL win over Camden Tuesday.

In net for the Red Devils, Logan Fisher stopped three shots for the win.

Billy Bernabe scored for Camden on an ssist from Avery Tompkins. Teammate Jack Chase made 15 stops in goal.

VVS ends its regular season hosting Oneida at 6:30 p.m. today in the TVL.

The Proctor boys soccer team got a 3-0 win over Tri-Valley League foe New Hartford Tuesday at home to end the Raiders’ regular season.

Andre Dischiavo, Siidahmed Somow and Alan Catic each scored in the win. Amir Halilovic had two assists and Ervin Ruznic had one.

Asim Gacic made 11 saves for the shutout.

Sofia Sherwood tallied the game’s only goal in a 1-0 win for the Vernon-Verona-Sherrill soccer team’s Tri-Valley League win at Camden Tuesday.

VVS plays its last regular season game at 4 p.m. Friday at Oneida in the league.

Lily Martin scored twice to help Poland to a 4-3 soccer win at Remsen Tuesday in the Center State Conference.

Maddison Haver scored and had an assist for Poland. Shelbi Hagues also scored. Logan Cookinham had two assits and Zyanna Irving-Summers had one.

Chloe Roark made two saves to earn the win.

Aiken also made a dozen saves in net for Remsen.

Poland ends the regular season hosting Town of Webb at 6 p.m. today in the league.

Remsen hosts Waterville at 4:30 p.m. today in a non-league game to end its regular season.

Alivia Rizzo had two goals in Oriskany’s 4-1 soccer win at home over Town of Webb Tuesday on Senior Night in Center State play.

Kaylee Burnop stopped 14 shots in goal to earn the win.

Oriskany ends its regular season with a non-league game at 11 a.m. Saturday.

Emily Gubbins stopped all four shots she faced in goal for the Bulldogs.

Westmoreland hosts Clinton at 4:30 p.m. today in a non-league game.

Dolgeville played at Fort Plains in a non-conference game Wednesday. Results were not available at press time.

Adirondack girls soccer only managed a single shot on goal in a 2-0 loss at home to Lowville Tuesday in a non-league matchup.

Mia Hanselman and Carli Freeman each scored and Jenna Weiler had an assist.

Jerika Myers stopped the lone shot she faced in goal for Lowville.

Morgan Hutchins stopped 23 shots in goal for the Wildcats.

Adirondack plays at 4 p.m. today at Beaver River in a non-league match.

Demi Scialdo scored three times to help the Frankfort-Schuyler girls soccer team to an 8-0 win over visiting Herkimer Tuesday in the Center State.

Angelina Tangorra stopped all nine shots she faced in goal for the win.

Frankfort hosts Cooperstown at 5 p.m. today in a non-league game to end its regular season.

Herkimer hosts Little Falls at 6 p.m. today in the league.

The Holland Patent field hockey team led 4-0 at the half Wednesday and held on for a 6-3 win at VVS in the TVL.

Maggie Cummings and Madison Oliver each had a pair of goals and an assist for the Golden Knights. Abby Draper and Zoe Kelly scored once each. Machaela Cushman had a pair of assists and Alivia Alexander and Kirsten Lighthall had one each.

Maggie Koenig made one save in goal for the win.

Carmella Garcia scored twice and assisted on the goal by Natalie Herzog for the Red Devils. Meredith Guertin had an assist as well.

VVS ends its regular season at Camden at 6 p.m. Friday in the league.